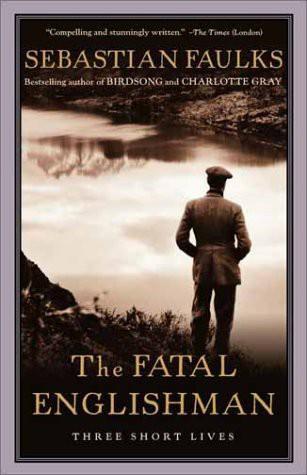 “Unusual, fascinating and interlocking in the oddest ways.”

“Superb …. A mystery story of rare narrative power…. Faulks brings to these portraits the exquisite detail which made …
Birdsong
so evocative. This is biography written with that revealing sense of the moment which marks good fiction.”

“This is the most wildly exciting book that I’ve read for a long time, and on a great theme: how the failures of Britain in the twentieth century have seeped into the souls of its countrymen. It’s a classic.”

Sebastian Faulks is the author of the novel
On Green Dolphin Street
and a trilogy of novels set in France:
The Girl at the Lion d’Or, Birdsong
, and
Charlotte Gray
, the latter two of which were bestsellers. After a period in France, he and his family now live in London. 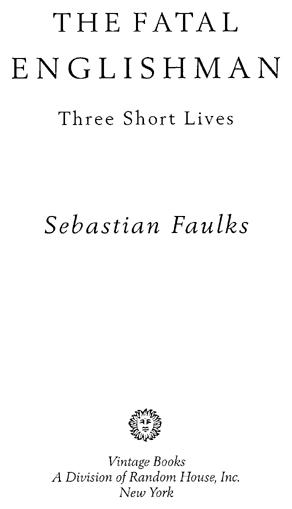 With love to William and Holly

By chance I read a book about a young American who had been by so far the outstanding character of his generation – as scholar, athlete and personality of ambitious charm – that his graduation from Yale in 1957 was covered by
Time
magazine, while his contemporaries selected the jobs he would give them when, not if, he became President. Yet after a glorious start, his career stalled. The book (
Remembering Denny
by Calvin Trillin) was an investigation into what went wrong. The subject ended up committing suicide, and much of his problem seemed to stem from the fact that he could not accept his homosexual desires. Had he been born a few years later, the author implied, he would have encountered no such problems.

The book made me think that young or short lives are more sensitive indicators of the pressure of public attitudes than lives lived long and crowned with honours. The stories of young people who delight parents and friends with their talents have a concentrated significance in their beginnings, and in their premature ends there is a natural poignancy that brutally epitomises the disappointment that is also common but less evident in longer, duller lives.

Three such lives, each done at the length its span naturally required (a third of a life, a third of a book) – that might well seem full enough to take away the sense of ‘so what’ that would cling to a single short life. And then if perhaps the subjects actually had achieved something interesting and if they were to come from different parts of the century and so have lived against a different public background and thus illustrate the impact of changing attitudes and preoccupations over a long period …

This book was originally called
The Artist, the Airman and the Spy.
It is, after all, three separate biographies: the lives of three people who never met. It seemed fair that the title should not only recognise the subjects’ individuality but also emphasise the defining importance of work in each man’s life.

As I researched and wrote these three lives, various links between the three characters and various common themes emerged, none of which I had known about before I had started. This obviously encouraged the urge towards unity that finds its best expression in fiction, when the events can be shaped and patterned to echo the themes, while the characters can be made, within the limits of their realistic capacities, to behave in a way that adds a further level of harmony.

I tried to resist this urge. Having allowed it to dictate a new title, which stressed the characters’ similarities, I wanted to remain faithful to their differences. The lives of real people, unlike those of fictional characters, seem to exert a small but constant outward force away from order. So while I attempted, as gently and as truthfully as possible, to shape the events of their lives into some comprehensible pattern, I tried also to respect their individual energies, which seemed to push in the opposite direction, back towards singularity: the artist, the airman and the spy.

I have occasionally used the words ‘England’ or ‘English’ where some readers might have expected ‘Britain’ or ‘British’. This is not because I imagine they are interchangeable, but because I accept that there is a difference.

O
ne day in the spring of 1921 a beautiful young Englishman set off for Paris to become the greatest painter the world had ever seen. His name was Christopher Wood and he was nineteen years old. Until he took the boat for Calais on 19 March he was working for a fruit importer in the City of London. He was the son of a doctor in the North West of England, and his sudden disappearance to France confirmed his family’s worst fears. Although Christopher wore shirts from the best outfitters in Jermyn Street, was well-mannered and polite to his parents, he seemed to have no understanding of middle-class convention. Some combination of circumstances had combined with a fierce streak in his character to make him wild and ambitious. He was determined to be a painter, and the intensity of his desire was frightening to his parents.

Dr Lucius Wood and his wife Clare had two children: Christopher, whom they knew as Kit, and Elizabeth, whom they called Betty. As a child, Kit had his hair cut in a bob and wore smocks. So did Betty. The family was relatively well off; the parents believed in God and the children believed in Father Christmas.