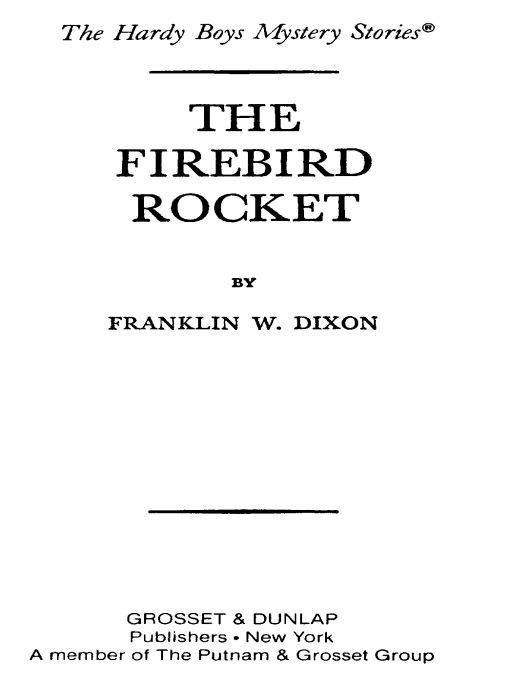 THE FIREBIRD ROCKET
The launching of the Firebird Rocket is endangered when a famous rocket scientist disappears without a trace on his way to the Woomera Monitoring Station in Australia. Assigned to the case, Fenton Hardy tells his sons he needs their help. And Frank and Joe must turn down a request that they find the missing son of a prominent senator.
The search for the scientist begins at the Princeton Space Laboratory, where the boys realize they are being hunted by an unknown adversary. Clues lead them to Australia, and again they are followed.
Then suddenly their lives are in danger!
Someone in an automobile tries to run them over; and, later, at dockside, a heavy cargo bale falls and just misses them. Disregarding the danger and warnings of worse to come, the boys follow the trail to a cattle station in the Australian Outback.
With courage, wit, and clever detective work, the young detectives begin to close in on the enemy, only to discover that the tables have been turned. Captured by their cunning adversaries, the Hardys face certain death!
Will they escape? Will the Firebird Rocket ever be launched? Read this exciting mystery about Frank and Joe's most difficult case. 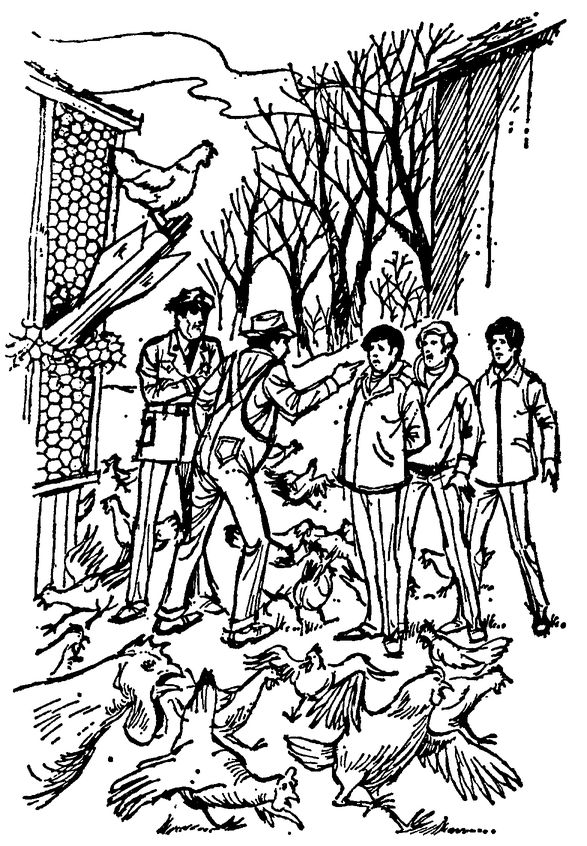 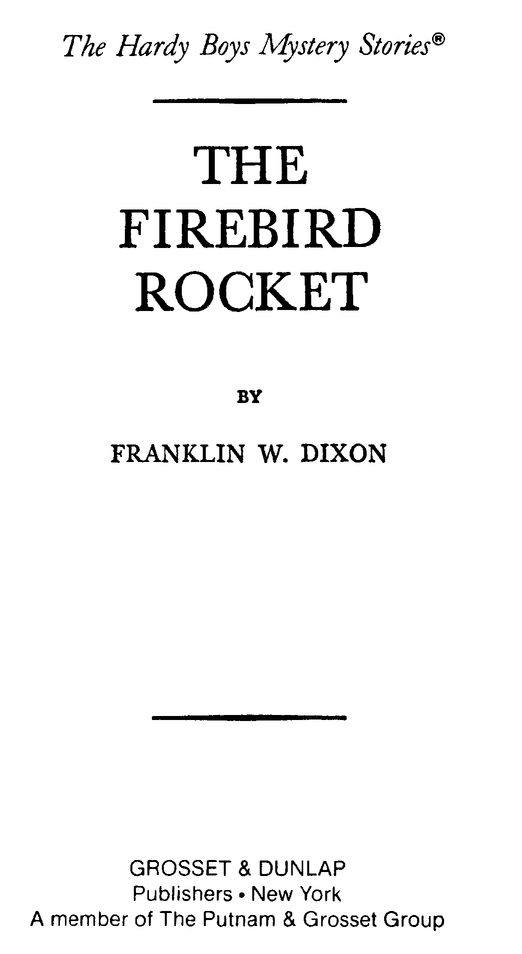 CHAPTER I
A Frantic Warning
FRANK and Joe Hardy were performing a chemical test in the laboratory over their garage. The boys were checking out a clue for their father, famous private detective Fenton Hardy.
Frank held a test tube up to the light. In it was a dark-colored solution soaked from a torn piece of cloth Mr. Hardy had sent from the Space Flight Center in Florida, where he was working on a new top-secret case.
“If Dad's hunch is right,” said Frank, “that cloth was stained with the invisible dye he uses to trap suspects.”
Joe nodded. “The methyl test will tell us.”
He picked up a plastic bottle labeled METHYL YELLOW. Unscrewing the cap, he tilted the bottle until a trickle fell into the solution.
Pufff!
A burst of acrid vapor shot up into the boys' faces. They staggered back, clutching their throats! Frank dropped the test tube, which smashed, and the bottle fell from Joe's nerveless fingers, clattering onto the wooden floor! The two boys rubbed their eyes, fought for breath, and felt giddy.
“The bottle!” Joe croaked. “It contains the wrong chemical!”
Desperately Frank groped about on the floor till his fingers closed over the plastic container, which was still oozing a wisp of vapor. He managed to screw the cap back on. Joe opened the window, and they collapsed on the sill.
Fresh air poured into the lab, dispersing the fumes and clearing their heads.
“That stuff was liquid tear gas, or I'm a monkey's uncle!” Joe exclaimed.
Frank examined the bottle. “It's supposed to be methyl yellow,” he declared. “That's what the label says.”
“Somebody switched it!”
“That's possible. But who? And why?”
“Let's talk to the guy at the chemistry shop who sold us the bottle,” Joe suggested, always eager for a mystery.
Joe Hardy was blond and seventeen. His darkhaired brother, Frank, was a year older.
As they were clearing up the mess from the broken test tube, the Hardys heard the doorbell, which was wired to ring in the garage as well as the house.
“Aunt Gertrude will answer it,” said Joe.
“She can't. She went out shopping with Mom,” Frank told him. “We'd better go see who it is.”
Hurrying out of the garage, they went through the house and opened the front door. The caller was a well-dressed, portly man, clutching an ivory-headed cane. He peered at the boys through gold-rimmed pince-nez, which he held in place on his nose with thumb and forefinger.
His gesture called their attention to the ring he was wearing. It was set with a huge red ruby.
“Is this the Hardy house?” he inquired in a deep booming voice.
“Yes, sir,” Frank replied.
“I'm Oliver Ponsley,” the man announced. “I would like to consult Fenton Hardy on an urgent matter.”
“Dad's away on a case right now, but would you care to come in and tell us about it?” Frank said politely. “As soon as we hear from him, we can give him your message.”
“Thank you. I would appreciate a chance to explain my problem.”
Frank led the way into the living room. Their visitor settled himself on the sofa, which groaned under his weight, and clasped his hands over his ivory-headed cane. Frank and Joe sat down in easy chairs and waited for him to speak.
“You boys often assist your father on his cases, do you not?” Ponsley inquired, sizing them up with a shrewd glance.
“That's right, sir,” Frank replied.
“And we've solved a few mysteries on our own,” Joe added, grinning modestly.
“So I've heard. Well, then, perhaps you can help me with this one, at least until your father returns.”
“We'll be glad to do whatever we can, sir.”
“Fine! My problem is thisâa young man named Michael Moran has disappeared, and he must be found. Quickly!”
“Have you notified the police, Mr. Ponsley?” Frank asked. “They should be able to help you on a missing persons case.”
“Not on this one,” Ponsley retorted sharply. “We can't risk the publicity. Michael Moran is the son of Senator Jeff Moran!”
He reached into his pocket and produced an old snapshot, which he handed to Frank. The Hardys saw a clean-cut youth, not much older than Frank, holding a baseball bat on his shoulder.
“That's the last photograph of Michael before he left home,” Ponsley told them. “He's been gone for over a year now.”
“A
year?
Good night! Hasn't his family tried to locate him at all?” Joe asked.
“No. They felt he wanted to go away and think things out for himself, and that he'd come back when he was ready.”
“Then why are they looking for him now?”
“Michael used to work for the Mid-County Bank. As you may have heard, the bank was recently broken into and robbed.”
“Gosh, yes. I remember hearing about that on the news!” Joe exclaimed.
“The next day, the police caught the two crooks who pulled the job,” Frank recalled.
“That's right.” Ponsley nodded. “What you may not know is that the culprits are now trying to incriminate Mike Moran.”
“How come?”
“The bank's alarm system was tampered with, which convinced the FBI that the robbers had inside help. So now those two scoundrels are saying it was Mike who gave them information on the wiring of the alarm system.”
“Is there anything to support their accusation?” Frank asked.
“Mike studied electrical engineering before he quit college to work at the bank. And a bank employe named Thurbow remembered that Mike showed some interest in the alarm system while he was there.”
“That doesn't prove anything,” said Joe.
“Certainly not!” Oliver Ponsley boomed. “So far, the FBI has made no official charge against Mike, but his family is very upset, especially since Senator Moran is running for reelection. A scandal could wreck his political campaign. He's sure Mike is innocent, and wants him to come home and clear his name.”

Tell Me True by Karpov Kinrade
Ignite by Kate Benson
Atop an Underwood by Jack Kerouac
Eli the Good by Silas House
The Brightest Stars of Summer by Leila Howland
He Loves Me Not by Caroline B. Cooney
Crimson by Tielle St. Clare
Pickers 1: The Find by Garth Owen
Gone by White, Randy Wayne
Fulfilled by Allyson Young