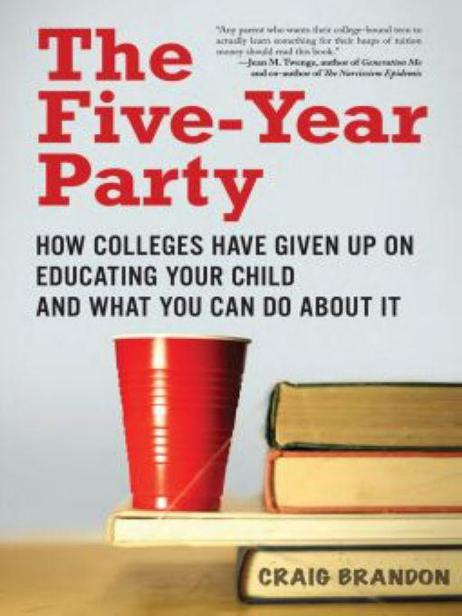 The Lies Told Along the Golden Walk

Nips and Tucks for Tired Colleges

Endless Tuition Hikes, and How Party Schools Get Away with Them

The “Unholy Alliance” with Predatory Lenders

Selling Out to Credit Card Companies

The Professor as Entertainer

How Much Do Students Really Study?

The Glorification of Stupidity

The Tragedy of the 10 Percent

Even Nondrinkers Are Victims

Chapter 5 - An Obsession with Secrecy

The Code of Silence

The Strange History of FERPA

Why the Report Card Never Arrives

The Destruction of Campus Discourse

The Clery Act and Unreported Statistics

Why the News Media Ignores the Problem

Chapter 6 - When the Party Ends and the Tab Comes Due

The Glut of Party School Graduates

Has the “College Premium” Disappeared?

College Graduates Who Refuse to Grow Up

Chapter 7 - How Parents Can Cancel the Five-Year Party

How to Protect Your Child

Policy Changes That Will Help Shut Down the Five-Year Party

A Call to Action

Appendix - The Red Flag List: How to Spot Party Schools and Subprime Colleges
Acknowledgements
Endnotes
Index
About the Author
Copyright Page
Praise for
The Five-Year Party
“High costs and debt, insufficient instruction, dangerous campuses, and poor job prospects: for too many students, a five-year college party often turns into a lifelong nightmare.
The Five-Year Party
is packed with illuminating stories and details about this crisis situation, and helps readers to avoid the dangers and get the most for their money.”
—Marc Scheer, Author,
No Sucker Left Behind: Avoiding the Great College Rip-Off
“In one dismaying and maddening episode and circumstance after another, Craig Brandon’s survey of college campuses sounds a vital warning for parents: ‘The institutions and administrators you trust to foster and guide your children’s formation are more interested in their pocketbooks than their intellects. Buyer beware!’”
—Mark Bauerlein, Author of
The Dumbest Generation: How the Digital Age Stupefies Young Americans and Jeopardizes Our Future
and Professor of English, Emory University
“After reading only a few pages of
The Five-Year Party
, I immediately started telling people about its important message. This crucial book exposes the consumer mentality now all too prevalent on college campuses, detailing how higher education has given students what they
want
at the expense of giving them what they
need
to compete in the global marketplace. Even better, the book tells parents and educators how this nefarious trend can be circumvented. Any parent who wants their college-bound teen to actually learn something for their heaps of tuition money should read this book.”
—Jean M. Twenge, Author of
Generation Me
and Co-Author of
The Narcissism Epidemic
and Professor of Psychology, San Diego State University
“With broad, unforgiving strokes, Craig Brandon paints a dark picture of residential college life that will give every parent pause before sending a child off to any of his ‘Party Schools.’”
—Barrett Seaman, Author of
Binge: Campus Life in an Age of Disconnection and Excess 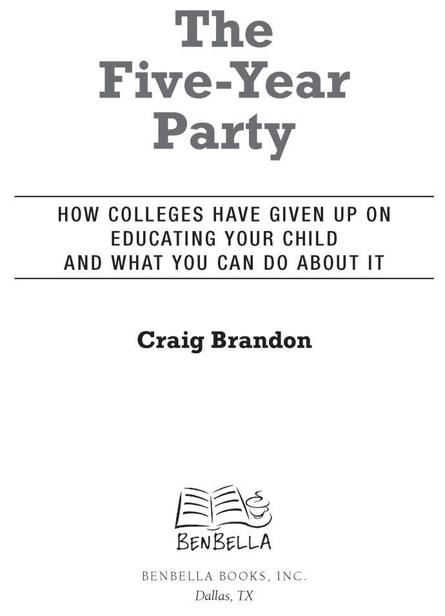 To my granddaughter, Charlotte Claire Brandon Anthony: May you never have to endure the terrors of a party school.
Introduction
M
y first inkling that something had gone seriously hay-wire in higher education came just after the turn of the millennium, when I was asked to take over the job of advisor to the campus radio station. I had spent the previous five years as a full-time journalism instructor and advisor to the student newspaper at Keene State College in New Hampshire, but I knew very little about radio. Nevertheless, it seemed like an interesting challenge and many of my colleagues from the College Media Advisors, who advised both newspapers and radio stations, said they would help me out. After all, how difficult could it be?
I met with the students who ran the radio station at their weekly meeting and we introduced ourselves. They seemed to be a good group of students interested in music and I explained that I would be learning on the job from them. We seemed to get along fine. But when I tuned in the radio station on my car radio while driving home from work, I was so shocked by what I heard that I had to pull over to listen. It wasn’t just the crude lyrics of the songs I found offensive but the comments from the disc jockeys, who attacked fellow students and teachers by name, discussed the physical attributes of female students’ anatomies, and described their latest sexual and alcoholic adventures in detail. It was like three dozen young Howard Sterns competing to be the most offensive.
One of the first things I did was to contact some of my CMA colleagues and explain what was going on. They offered advice and e-mailed me copies of their rulebooks for student radio stations and condensed versions of Federal Communications Commission regulations regarding low wattage college stations. These were very helpful; at the next meeting with the students I handed out copies.
It became clear to me immediately that they had only a dim understanding of what was required of them in terms of eliminating profanity and slander and complying with the seemingly endless and complicated FCC regulations. We talked about public access files, prescreening of music before it was put on the playlist, and the legal limits on what they could say on the air.
At first, they seemed willing to go along with the new rules; we set up committees to deal with eliminating obscenity and to deal with all of the draconian FCC regulations about things like how long they had to stay on the air and all the various documents that had to be maintained, such as public access files. Within a few weeks, however, there was widespread rebellion. All of this was just too much work, they said. All they really wanted to do was play music on the radio. “This sounds like censorship,” they said. “Why can’t we do what we want?”
There really wasn’t a choice, I explained. Failure to follow the rules could mean we’d have to deal with slander lawsuits from listeners and fines from the FCC. We could even lose our license. It all fell on deaf ears. It was much more fun to do it the way they had always done it, they said. The meeting ended with catcalls and raspberries. On the way home that night, I listened again and the station was back to the same offensive songs about the pleasures of raping women and disk jockeys describing in detail their personal exploits during their “fucked up” weekends. It seemed to me that they were deliberately broadcasting the most offensive songs and saying things that they now knew were slanderous and unprofessional.
Many of the station’s listeners were local high school students and I could imagine their parents listening in. When I discussed this with the students, they told me I should stop listening to the station because it seemed to them that I was spying on them. I knew then that I was in way over my head and met with the student affairs administrators to ask for some help. They set up a meeting with the students and me to discuss the dispute and come up with a resolution.
I began the meeting by carefully explaining the situation and showed the group the FCC rules and the handbooks that were used by other colleges faced with the same issues. When it was their turn, the students complained that it was their radio station and that I was interfering with their right to do what they wanted.
Then I sat back and waited for the students to be read the riot act by the administrator in charge of student organizations. To my absolute astonishment, he said that the students were correct. It was their radio station, he said, financed by student fee money, and the college’s policy was that faculty and administrators were not to interfere with their decisions. The students cheered as my jaw dropped in astonishment. I could not even speak for a moment.

Written in the Stars by Ali Harris
Trouble Magnet by Graham Salisbury
Murder of a Sweet Old Lady by Denise Swanson
The Greek's Long-Lost Son by Rebecca Winters
This Is Not That Dawn: Jhootha Sach by Yashpal
Sexy Secret Santa by Liz Andrews
The Ghosts of Altona by Craig Russell
The Path Was Steep by Suzanne Pickett
Darrington 01 - Marriage Minded Lord by Sandra Sookoo
Safiah's Smile by Leora Friedman