The Forgotten (The Lost Words: Volume 3) 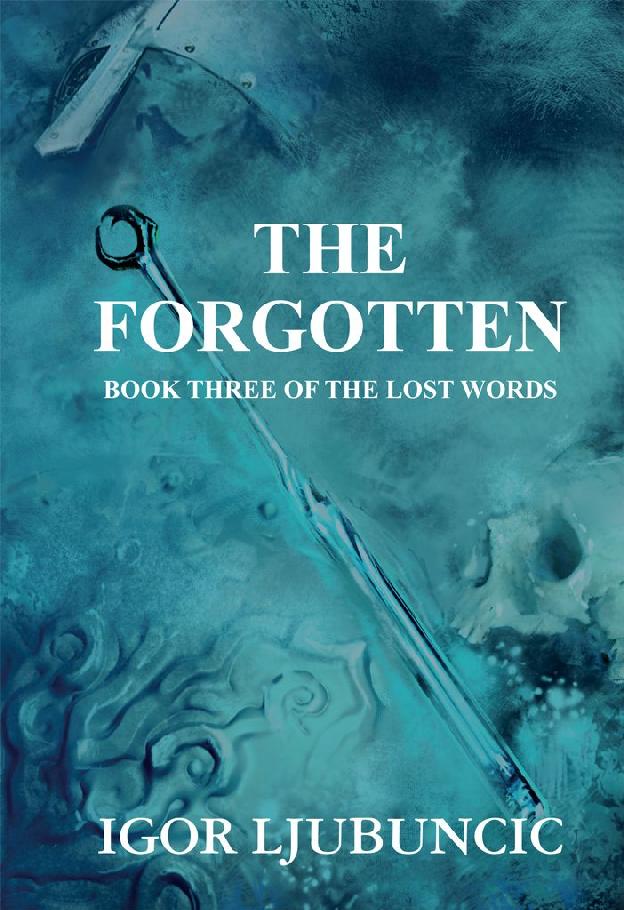 Book Three of The Lost Words

For me brother, who is just as talented as I

All right, I will keep it short this time. Thanks go to: Erin, the CreateSpace editor, who polished my English into a presentable product; Anton Kokarev of
kanartist.ru
for the kickass cover art; you readers for the endless stream of useful suggestions; and finally, my wife, a sharp and ruthless critic, who slays boring chapters without mercy.

T
anid approached the village with apprehension. He was well aware that, despite his divine, all-encompassing strength, he was still vulnerable to knives and pitchforks and arrows wielded by humans. Strange, how gods were just as easily killed as their own creations. But it was their own fault. Having created humans from their own essence, they had given them the key to their own vulnerabilities.

He needed invincibility so he could defeat Calemore.

Now that Tanid was the god of everything, the one god left in this world, the reality had changed. All the power of belief was his, infusing him like hot red lava, making his blood pulse with new energy, torrents of it, a wild, raw, almost unbridled power that threatened to bring him to his knees in tears of joy and agony. But he would learn to contain and master all that strength.

Tanid looked at the village, its two dozen houses clustered together for warmth and protection, thatched, steep rooftops to keep the snow from caving them in during wintertime, spindly chimneys made of old mud and straw, the mill wheel paddling in the creek, the herd of goats grazing in the pasture. He stared at the statue erected in the tiny square, a monument to the gods and goddesses. He could feel a tendril of warmth coiling away from that granite slab and drifting toward him, like a loose thread of a cobweb. The belief of people was his. All of it was his.

Well, not all. The far north was a dark place, a dead place. And away from the Old Land—the realms they called it now—there were other domains of humans, places created and inhabited long after the Great Court, where belief had transmuted and degenerated and evolved into new shapes and forms. In those distant lands, belief existed, but it was an alien form, a different kind of power that Tanid could not harness and use.

No matter. The lives and fates of the gods and goddesses had always been about the Old Land, about Gale Ropan, Padam, and the Broken Islands, and this was where it would all be decided. He had to grow strong enough to defeat Calemore and stop his conquest of destruction.

Before he could do that, he needed help.

Invincibility might not have to be about physical strength to stop hammer blows and the punch of steel-headed arrows. It might only be the ability to remain one step ahead of his foe at all times. The ability to glimpse the future ahead of everyone else. To know what the world would offer and be the first to act.

That privilege was denied of even the gods and goddesses themselves. Such was the world.

But not for the Special Children, the gods’ best weapons.

Tanid let his palms caress the hip-high stalks of the mid-spring grass, green and lush and full of hope. The winter was gone, replaced by vivid colors of rebirth and renewed faith. In the Safe Territories, you could feel it more than anywhere else. These people still loved the gods and goddesses.

He saw one of the goatherds point toward him. He saw the few women beating their clothes in the creek gather the wet bundles and walk back to their homes. He saw a farmer let drop his plow and pick up his large staff instead. A man went into a house and came back holding a sword, a real weapon of war.

Tanid tried to suppress the feeling of moderate fear as he slowly walked down the gravel path toward the village, knowing all too well the risks of his endeavor. But he knew he could not let these people know who he was. They probably would not believe him anyway. And he did not dare squander his strength on magical protection. He could not afford it yet. He needed every ounce of power to fight Calemore. There was just no knowing when his paid killers might show up. The witch would not dare kill him personally, but there was nothing stopping a human from plunging a blade through his chest and ending all hope for humanity.

The god wondered how he appeared to these people. He tried to be as nondescript as possible, wearing a common man’s clothes, assuming average, boring professions, names, and titles. It would not be wise to claim skills and crafts he could not demonstrate if asked. So, he never was a warrior or a goldsmith or a famed horseman. But he could get along being a merchant, a hide seller, a pilgrim. Simple characters that would not alarm simple people.

“Who goes there?” a youthful villager shouted, standing on the gravel path leading into the square, holding a short
sword in his right arm. He bore like a soldier. Tanid remembered seeing the people of Gale Ropan—Parus—populate this land after the great destruction nineteen human summers ago. He liked these Parusites. They still held to the faith.

A dog barked, a small black thing with stunted legs, keeping to the side of a small field of hops. It would not approach him; the animals knew better.

Tanid stopped and raised his hands in what he hoped was a benign gesture of greeting. “My name is Kapper,” he called. He refrained from using any words in ancient dialects. There was always a small chance someone might recognize them. Especially the clergy. “I come in peace. I mean you no harm. I am a merchant, looking for an apprentice.”

“Look somewhere else. We ain’t got no one here what wants to be a ‘prentice,” the youth challenged. “Go.”

Go
. Tanid had often met with reluctance, fear, sometimes outright hatred going into small places, seeking for what he needed. There was war in the realms, and the memory of the Feoran uprising was still fresh in the Territories. The local population did not trust strangers.

It would be wise to retreat. He had to accept the risk, though, knowing all too well that a single fatal blow to his human avatar would undo everything good and noble he had in store for the human race. In a way, it would not be much different from one of Calemore’s killers catching up with him and murdering his body. However, while the latter was certainty postponed and maybe eluded, the former was just a chance, balanced against human goodwill—if he searched for Special Children among humans, he might die; if he did not, he
would
die. A chance. He had to take it.

“I will pay money,” Tanid said. Another risk. Claiming you had coin could cost your life in this human world. Life was so
cheap, especially in war. But he must do it. He could not let this village go unexplored. His death, by human hands or the witch, meant the world would be doomed. The only way Tanid could survive and best Damian’s monster was to find Special Children and use their powers in his favor.

“What do you need?” the youth asked. Another man had joined him, the farmer with the staff.

Tanid smiled. Progress, good. He could not be a coward, not now. “I just need to take a look at your children. See if there’s anyone with a talent. That’s all. Nothing more. Please.” He could not walk away.

The two villagers looked at one another. Tanid remembered that look from dozens of other villages he had visited since Damian’s death. The look of hope and goodwill mixed with greed and fear.

Tanid waited. The sun beat from the sky. The air was cool and warm at the same time. If he ignored the reality, it was a perfect spring day, clean and beautiful.

“All right, Kapper. You take one look, and if one of them kids has a mind to it, then maybe we can talk about it.”

“Thank you, kind sir,” the god offered, truly glad. He hated the possibility of having to abandon a place for the fear of death.

Here was the risky part of his work. Every village had its one skeptic. Each time, Tanid had to prove his lie. Sometimes, he managed without magic. Sometimes, he had to use it. A
tiny amount, just a flake. It wouldn’t be sufficient to stop a gnat bite, but it was good enough to pass as an illusion from a hundred paces away.

“There.” He pointed toward the crest of the gravel road. He made the image of a cart appear there. The two men looked confused, feeling they had not seen the wagon there before, but the mind did everything it could to convince itself it was sane.