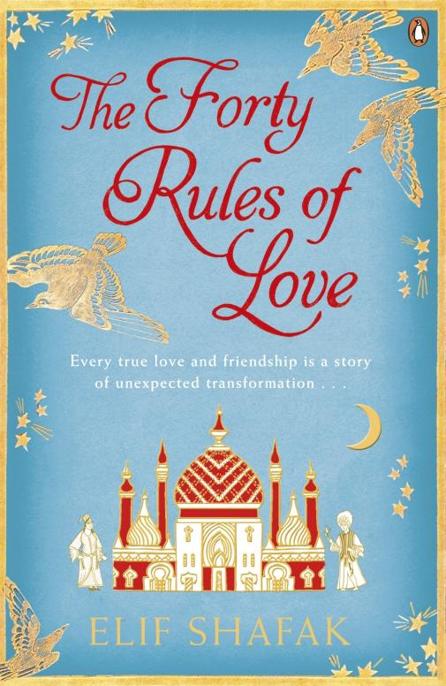 Elif Shafak is one of Turkey’s most acclaimed and outspoken novelists. She was born in 1971 and is the author of six novels, including
The Forty Rules of Love, The Bastard of Istanbul, The Gaze, The Saint of Incipient Insanities and The Flea Palace
, and one work of non-fiction. She teaches at the University of Arizona and divides her time between the US and Istanbul.

Grateful acknowledgement is made for permission to reprint excerpts from the following copyrighted works:‘Only Breath’ and ‘Why Wine Is Forbidden’ from
The Essential Rumi
, translations by Coleman Barks (HarperCollins). Used by permission of Coleman Barks.

Without limiting the rights under copyright reserved above, no part of this publication may be reproduced, stored in or introduced into a retrieval system, or transmitted, in any form or by any means (electronic, mechanical, photocopying, recording or otherwise), without the prior written permission of both the copyright owner and the above publisher of this book

When I was a child, I saw God,

I watched the mysteries of the higher and lower worlds. I thought all men saw the same. At last I realized that they did not see.…

Between your fingers you hold a stone and throw it into flowing water. The effect might not be easy to see. There will be a small ripple where the stone breaks the surface and then a splash, muffled by the rush of the surrounding river. That’s all.

Throw a stone into a lake. The effect will be not only visible but also far more lasting. The stone will disrupt the still waters. A circle will form where the stone hit the water, and in a flash that circle will multiply into another, then another. Before long the ripples caused by one plop will expand until they can be felt everywhere along the mirrored surface of the water. Only when the circles reach the shore will they stop and die out.

If a stone hits a river, the river will treat it as yet another commotion in its already tumultuous course. Nothing unusual. Nothing unmanageable.

If a stone hits a lake, however, the lake will never be the same again.

For forty years Ella Rubinstein’s life had consisted of still waters—a predictable sequence of habits, needs, and preferences. Though it was monotonous and ordinary in many ways, she had not found it tiresome. During the last twenty years, every wish she had, every person she befriended, and every decision she made was filtered through her marriage. Her husband, David, was a successful dentist who worked hard and made a lot of money. She had always known that they did not connect on any deep level, but connecting emotionally need not be a priority on a married couple’s list, she thought, especially for a man and a woman who had been married for so long. There were more important things than passion and love in a marriage, such as understanding, affection, compassion, and that most godlike act a person could perform, forgiveness. Love was secondary to any of these. Unless, that is, one lived in novels or romantic movies, where the protagonists were always larger than life and their love nothing short of legend.

Ella’s children topped her list of priorities. They had a beautiful daughter in college, Jeannette, and teenage twins, Orly and Avi. Also, they had a twelve-year-old golden retriever, Spirit, who had been Ella’s walking buddy in the mornings and her cheeriest companion ever since he’d been a puppy. Now he was old, overweight, completely deaf, and almost blind; Spirit’s time was coming, but Ella preferred to think he would go on forever. Then again, that was how she was. She never confronted the death of anything, be it a habit, a phase, or a marriage, even when the end stood right in front of her, plain and inevitable.

The Rubinsteins lived in Northampton, Massachusetts, in a large Victorian house that needed some renovation but still was splendid, with five bedrooms, three baths, shiny hardwood floors, a three-car garage, French doors, and, best of all, an outdoor Jacuzzi. They had life insurance, car insurance, retirement plans, college savings plans, joint bank accounts, and, in addition to the house they lived in, two prestigious apartments: one in Boston, the other in Rhode Island. She and David had worked hard for all this. A big, busy house with children, elegant furniture, and the wafting scent of homemade pies might seem a cliché to some people, but to them it was the picture of an ideal life. They had built their marriage around this shared vision and had attained most, if not all, of their dreams.

On their last Valentine’s Day, her husband had given her a heart-shaped diamond pendant and a card that read,

To my dear Ella,

Ella had never confessed this to David, but reading his card had felt like reading an obituary.
This is what they will write about me when I die,
she had thought. And if they were sincere, they might also add this:

Building her whole life around her husband and children, Ella lacked any survival techniques to help her cope with life’s hardships on her own. She was not the type to throw caution to the wind. Even changing her daily coffee brand was a major effort.

All of which is why no one, including Ella, could explain what was going on when she filed for divorce in the fall of 2008 after twenty years of marriage.

But there was a reason: love.

They did not live in the same city. Not even on the same continent. The two of them were not only miles apart but also as different as day and night. Their lifestyles were so dissimilar that it seemed impossible for them to bear each other’s presence, never mind fall in love. But it happened. And it happened fast, so fast in fact that Ella had no time to realize what was happening and to be on guard, if one could ever be on guard against love.

Love came to Ella as suddenly and brusquely as if a stone had been hurled from out of nowhere into the tranquil pond of her life.