Read The Fountains of Youth Online

The Fountains of Youth 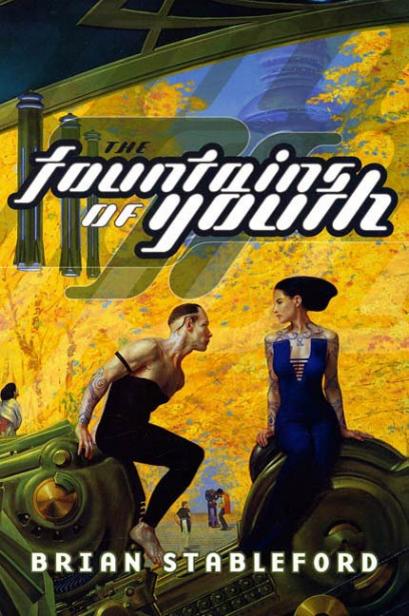 Inherit the Earth
Architects of Emortality
The Fountains of Youth

This is a work of fiction. All the characters and events portrayed in
this novel are either fictitious or are used fictitiously.

THE FOUNTAINS OF YOUTH

All rights reserved, including the right to reproduce this book, or
portions thereof, in any form.

Tor
®
is a registered trademark of Tom Doherty
Associates, LLC.

For Jane, and everyone engaged in the serious
business of learning to live in the future

A much shorter and substantially different version of this novel was published in the April 1995 issue of
Asimov’s Science Fiction.
I am very grateful to Gardner Dozois for publishing that novella and reprinting it in his annual collection of the
Year’s Best Science Fiction.
In the course of researching Mortimer Gray’s
History of Death
I consulted numerous academic studies of attitudes to death, of which the most useful proved to be
Man’s Concern with Death
by Arnold Toynbee, A. Keith Mant, Ninian Smart, John Hinton, Simon Yudkin, Eric Rhode, Rosalind Hey-wood, and H. H. Price (London: Hodder & Stoughton, 1968);
The Hour of Our Death
by Philippe Aries (London: Allen Lane, 1981); and
Death, Ritual, and Belief: The Rhetoric of Funeral Rites
by Douglas J. Davies (London: Cassell, 1997). I should also like to thank David Lang-ford for his invaluable contributions to the collaborative future history we first set out in
The Third Millennium
(1985), much of which is reconfigured herein; Jane Stableford for proofreading services and helpful commentary; and David Hartwell for helping to keep the flickering flame alight.

A
nyone who has chosen to read this autobiography must be hoping to gain some insight into the same question that led me to write it: Why did Mortimer Gray write
The History of Death?

The easy answer is, of course, that somebody had to do it, and once I had published my first volume I had staked a claim that others were bound to respect, no matter how impatient they became with my slowness or the thrust of my arguments. It would, however, be disingenuous to pretend that anyone else’s history of death would have been exactly the same as mine. The question would still remain: Why did
Mortimer Gray
write the particular history that bears his name? What experiences shaped him and cast their shadow upon his history?

It would, I suppose, be possible to begin the search for an explanation with the Great Coral Sea Catastrophe, which provided my first near-death experience as well as my first meeting with Emily Marchant, but it would not be right. I was Mortimer Gray long before I set sail on the ill-fated
Genesis
, and there is a sense in which the historian of death was already in the making before the Decimation. At the risk of telling my readers rather more than they need or desire to know, therefore, I feel that I must start at the very beginning of my own story, with an account of my unusual childhood. There, I hope, it will be possible to locate the seed of the individual that I became and the work that eventually made me famous.

Mortal humans had no alternative but to live in the present. They woke up every morning knowing that disaster might strike them down before evening in any of a hundred different ways, and they knew that even if they were to survive, still they were ephemera bound to Earth for a mere moment of its history. Our parents and grandparents hoped that they would be different and that they would have the opportunity of living in the future, but their hopes were dashed; no sooner had they reached the crossroads of their burgeoning careers than they learned the sad truth. Ours is the first generation of humans to have the privilege of knowing that we really can live in the future; ours is, therefore, the first generation to have the responsibility and the duty of discovering how that might and ought to be done.

—Mortimer Gray
Introduction to Part One of
The History of Death
, 2614

I
was born in 2520, an unexceptional child of the twenty-sixth century. Like my contemporaries, I was the beneficiary of a version of the Zaman transformation, which differs hardly at all from the one most commonly used today. By comparison with the children of previous centuries, however—excepting a minority of those born in the latter decades of the twenty-fifth century—I and all my kind were new. We were the first true emortals, immune to all disease and further aging.

This does not mean, of course, that I shall never die. There are a thousand ways in which the life of an emortal might be ended by accident or misadventure. In any case, future generations may well regard it as a major discourtesy for any earthbound person to postpone voluntary extinction too long—and those who choose not to remain earthbound multiply the risk of eventual death by accident or misadventure at least a hundredfold.

Given that all my readers are in exactly the same condition as myself, it may seem unnecessary even to record these facts and rather ridiculous to make so much of commonplace circumstance. If I am exceptional in any way at all, however—and why, otherwise, should I take the trouble actually to write my autobiography?—then I am exceptional because I have tried as hard as I can during these last five hundred years to make my fellow human beings conscious of the privileges and responsibilities of the emortal condition.

My own transformation was carried out at Naburn Hatchery in the county of York in the Defederated States of Europe, but as soon as I was decanted my foster parents removed me to a remote valley in the Nepalese Himalayas, where they planned to raise me to early adulthood. In those days, every team of mortal co-parents had to formulate its own theory as to the best way to bring up an authentically emortal child. Such decisions seemed uniquely problematic, because my co-parents and others like them knew that their children would be the last to see their parents die and that theirs was the duty of supervising humankind’s last
great evolutionary leap. Previous generations of parents had, of course, had some cause to hope that they were mere mortals entrusted with the care of emortal children, but my foster parents had every reason to believe that I was a member of a different species: the one that would inherit Earth as their own species surrendered to extinction. Such longevity as my parents had was contrived by nanotechnological repair, requiring periodic “deep tissue rejuvenations” that were hazardous in themselves and left their recipients horribly vulnerable to the kind of mental erasure that had been known for six centuries as “the Miller Effect.” None of my fosterers was a ZT, but they all understood well enough how different ZTs were from their own fate-betrayed kind.

Although the first, still-imperfect, ZTs had been born seventy-five years earlier it was still rare in 2520 for any company of parents to include a ZT. People in their seventies were generally considered too young to be contemplating parenthood even though few beneficiaries of nanotech repair lived significantly longer than two hundred years. It was not until 2560, at the earliest, that ZT children were likely to have even a minority of ZT parents; even then it was considered a matter of course as well as courtesy that mortals—or “false emortals,” as they were still commonly called—were given priority when applications for parenthood were submitted to the Population Agency. They were the ones under pressure of time, the ones whose needs and desires were urgent.

I take the trouble to recall all this not merely to stress that mine was the common lot of my unique generation but also to justify the seeming eccentricity of my foster parents’ approach to child rearing. They took their chosen task so seriously that they could not simply accept commonplace assumptions about the best way to bring up a child; they felt that they had to approach every decision anew, to reexamine all assumptions and reevaluate all conclusions.

There was a time when I thought my parents slightly mad, especially when I was still able to eavesdrop on their interminable arguments and recriminations, but I do not think it now, even though no modern newborn spends his childhood as I spent mine. My parents took me to the remotest part of Nepal as soon as I was born because they thought that it would be good for me. Papa Domenico thought that it would be good for me because it would prove to me that there was no place on Earth so
bare of resources that its doors did not open directly into his beloved Universe Without Limits, while Mama Siorane thought that it would be good for me because it would put me much more closely in touch with “brute reality,” but it does not matter which of these apparently contradictory theses was closer to the truth. Although I never became what Papa Domenico would have called a “dedicated virtualist” I have been an assiduous explorer of the Universe Without Limits, and I have certainly had my share of bruising contacts with brute reality, so I suppose they were both right in their different ways.

This autobiography will have little or nothing to say about virtualist Utopianism and a great deal about realist Utopianism, but that does not mean that Mama Siorane was any more of a mother to me than Papa Domenico was a father. I had eight parents, and that—in association with the efficiency of VE education—is generally conceded to be perfectly sufficient to make every modern child the son or daughter of the entire human race. That is what I am, as are we all. That is why my personal history is, in a sense, the personal history of everyone who is potentially able to live in the future.

T
he ages of my fosterers varied from 102 to 165. They were humble enough not to think of themselves as all-wise but vain enough to think of themselves as competent in the art of parenting as well as brave. They were confident that they were fully qualified to swim against the tide of convention. I suppose that they were able to agree that I should be raised in one of the remotest areas of the world, in spite of their very different notions of why it was a good idea, because they had all lived through the heyday of the Decivilization Movement. Even those among them who had not been sympathetic to its nebulous ideals had strong feelings about the unsuitability of cities as environments for the very young.

Taming Johnny by Newell, Kaylie
Welcome to Braggsville by T. Geronimo Johnson
Shadows of Bourbon Street by Deanna Chase
Seek and Destroy by Allie K. Adams
Viking by Connie Mason
The Early Pohl by Frederik Pohl
The Mountain and the Wall by Alisa Ganieva
McNally's Secret by Lawrence Sanders
From Across the Ancient Waters by Michael Phillips
Too Bright to Hear Too Loud to See by Garey, Juliann