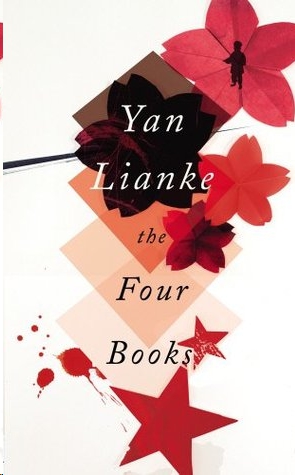 A
LSO BY
Y
AN
L
IANKE

Translated from the Chinese
by Carlos Rojas

All rights reserved. No part of this book may be reproduced in any form or by any electronic or mechanical means, including information storage and retrieval systems, without permission in writing from the publisher, except by a reviewer, who may quote brief passages in a review. Scanning, uploading, and electronic distribution of this book or the facilitation of such without the permission of the publisher is prohibited. Please purchase only authorized electronic editions, and do not participate in or encourage electronic piracy of copyrighted materials. Your support of the author’s rights is appreciated. Any member of educational institutions wishing to photocopy part or all of the work for classroom use, or anthology, should send inquiries to Grove/Atlantic, Inc., 154 West 14th Street, New York, NY 10011 or
[email protected]
.

First published as
Sishu
by Mingpao Publishing Company, Ltd. in 2010.

This book is dedicated to all of those who have been forgotten by history,
and to those millions of scholars who have lost their lives.

Yan Lianke has noted that whenever he travels abroad, he is invariably introduced as “China’s most controversial and most censored author.” He claims he is neither honored nor annoyed by this characterization, but points out that in contemporary China’s publishing environment, it would be unusual for a serious author to never run into problems with the censors.
1

The Four Books
, Yan Lianke’s novel about the Great Leap Forward (1958–1961), reflects on similar issues of literary production and political supervision. Following on the heels of the Hundred Flowers Campaign (1956), which encouraged citizens to express criticisms of the regime, and the Anti-Rightist Campaign (1957), which labeled many of those same citizens as rightists and sentenced them to compulsory re-education, the Great Leap Forward began as a set of policy directives designed to jumpstart China’s economy so that it might overtake that of Great Britain in fifteen years. The resulting emphasis on rapid industrialization and collectivization, however, had catastrophic consequences—including a nationwide famine that claimed the lives of tens of millions of people. Although the government refers to this period as the “three years of natural disaster,” it is nevertheless widely acknowledged that the crisis was in large part a result of a set of tragically misguided political decisions. Yan Lianke’s novel is unusual in that it offers a detailed exploration, in fictional form, of some of the policy mistakes and human tragedies that unfolded during this period. While there are many Chinese literary works that offer a critical perspective on the more recent Cultural Revolution (1966–1976), there are as yet relatively few works that attempt to do the same with respect to the Great Leap Forward and its aftermath.

The Four Books
focuses on a re-education compound, known as the ninety-ninth district, for intellectuals accused of being rightists. None of these characters is given a proper name, and instead they are identified by their former occupation: the Scholar, the Author, the Musician, the Theologian, and so forth. This compound is led by a young boy identified as the Child. Part dictator, part naïf, and part martyr, the Child oversees the accused rightists with an almost infantile system of rewards and punishments. At one point, the Child recruits one of them—a writer known as the Author—to keep a journal detailing the actions of the other residents of the compound, promising him that he will be permitted to return home early if he provides enough incriminating material about his peers. The result is a collection of documents titled
Criminal Records
, excerpts of which are reproduced in
The Four Books
. Even as the Author is keeping this journal for the Child, he secretly begins taking notes for a novel he plans to write after he is released. This latter work takes inspiration from the same events that the Author is recording for the Child, but from a very different perspective. The result, we are told, is a five-hundred-page novel that is eventually published under the title
Old Course
—the title alludes to the “old course” of the Yellow River that once ran right through the territory where the Re-Ed compound is now located, but also carries connotations of ancient ways or deeply entrenched customs.

In addition to
Criminal Records
and
Old Course
, Yan Lianke’s
The Four Books
also incorporates fragments from two other texts. The novel opens with an excerpt from an anonymous manuscript titled
Heaven’s Child
that relates the story of the Re-Ed compound in a voice that draws eclectically from sources ranging from Christianity to Chinese mythology, and it concludes with the introduction to a philosophical manuscript titled
A New Myth of Sisyphus
that had been composed in secret by another character in the compound. This final text offers a retelling of the myth of Sisyphus’s divine punishment. Although it does not refer to the Re-Ed compound directly, it could nevertheless be seen as an allegorical commentary on the punitive conditions that hold sway in the compound itself. In this retelling, Yan Lianke took inspiration from a “strange hill” located outside of the northern Chinese city of Shenyang, where objects roll up the hill on their own accord but have to be pushed back down. The result may be viewed as a commentary on the workings of power, but also on the possibility of either turning that power against itself or of finding a space of freedom within the soul-crushing conditions imposed by that same power.

The title
The Four Books
evokes both the set of Confucian texts known as the Four Books as well as the four gospels within the Christian tradition. But while the novel itself is composed in a distinctive language that reflects the influence of these and other canonical texts, Yan’s title refers most immediately to the fact that his novel is composed of interwoven excerpts from the four fictional manuscripts listed above. Each manuscript is written in a different voice and from a different perspective, and the tensions between them mirror those that characterized the Re-Ed compound itself. Moreover, at least three of these manuscripts were composed in reaction to the Child’s attempts to shape the narrative about the Re-Ed compound under his command, suggesting that the novel as a whole may be seen as a symptom of these broader struggles over knowledge and literary representation.

Given that all of the accused rightists in this Re-Ed compound are intellectuals, they brought a variety of books with them. The Child systematically confiscates these texts and burns them, including Western classics like
Don Quijote, Faust
,
The Divine Comedy,
and
The Phenomenology of Spirit
; religious works like the Bible and Buddhist sutras; and even Chinese texts like Lu Xun’s
Call to Arms
and
Wild Grass,
Strange Tales of the Liao Zhai Studio
, and
Laws of the Tang and Song
. The Child’s attempts to suppress these works partially backfire, however, as characters come up with ingenious ways of preserving their banned texts. For instance, the Musician keeps a copy of
La Dame aux Camélias
hidden inside her pillow, the Theologian hides a tiny Bible inside a cavity he carves out within a copy of Marx’s
Capital
, and even the Child himself becomes secretly entranced by an illustrated edition of stories from the Bible.

Related issues of literary censorship also inform the backdrop of the novel itself. Before
The Four Books
, several of Yan Lianke’s own works had run into problems with the authorities. For instance, following the publication of his 2004 novel
Lenin’s Kisses
, which describes a harebrained plan to purchase Lenin’s embalmed corpse from Russia and use it as the basis for a Chinese tourist site, Yan was dismissed from his position with the People’s Liberation Army, for which he had worked for more than twenty years. His following novel,
Serve the People!
, which offers a parody of Maoist rhetoric during the Cultural Revolution,
never got through the censors, and his 2006 novel about China’s rural AIDS epidemic,
Dream of Ding Village
, was initially published but then recalled (though bookstores were allowed to sell their remaining stock). When Yan began working on
The Four Books
, accordingly, he decided to simply write what he wanted without trying to second-guess the censors. As he puts it:

I’ve always dreamed of being able to write without any regard for publication. The Four Books is (at least partially) an attempt to write recklessly and without any concern for the prospect of getting published. When I say that I have written this recklessly and without concern for publication, I do not mean that I have simply written about mundane or contemptible topics, such as coarse and fine grains, beautiful flowers and full moons, or chicken droppings and dog shit, but rather that I have produced a work exactly as I wanted to.
2

In the end, Yan was unable to find any Mainland Chinese publisher willing to accept the manuscript, though he did print a small private run of the novel for close friends and colleagues. The novel has been published in traditional Chinese character editions in Hong Kong and Taiwan and has been translated into several foreign languages.

In spring of 2014, it was announced that Yan Lianke had been awarded the Franz Kafka Prize, making him the first Chinese-language author to win this prestigious prize. Like the Nobel Prize for Literature, the Kafka Prize is awarded in recognition not of a single work but rather of an author’s entire literary oeuvre. The stated criteria for the Kafka Prize include “the quality and exclusivity of the artwork, its humanistic character and contribution to cultural, national, language and religious tolerance, its existential, timeless character, its generally human validity, and its ability to hand over a testimony about our times.” Named after an author who famously burned the vast majority of his compositions and demanded, on his deathbed, that his remaining unpublished manuscripts be destroyed as well, the Kafka Prize is a fitting tribute to Yan Lianke, whose own work is located at the interstices of public and private discourse—increasingly influential in China and abroad, even as several of his key novels, most notably
The Four Books
itself, remain largely inaccessible within his own country.

The Getaway God by Kadrey, Richard
Noble Pursuits by Chautona Havig
A Childs War by Richard Ballard
Herald of the Storm by Richard Ford
Bella Summer Takes a Chance by Michele Gorman
Dominion by Marissa Farrar
Made of Stars by Kelley York
The Law of Dreams by Peter Behrens
Why Darwin Matters by Michael Shermer
Canary by Duane Swierczynski