The Further Investigations of Joanne Kilbourn 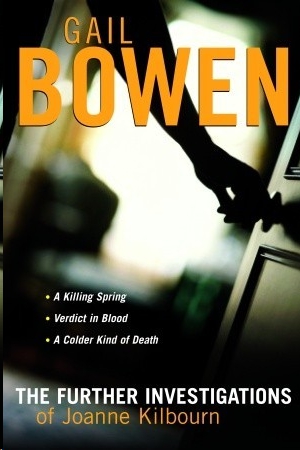 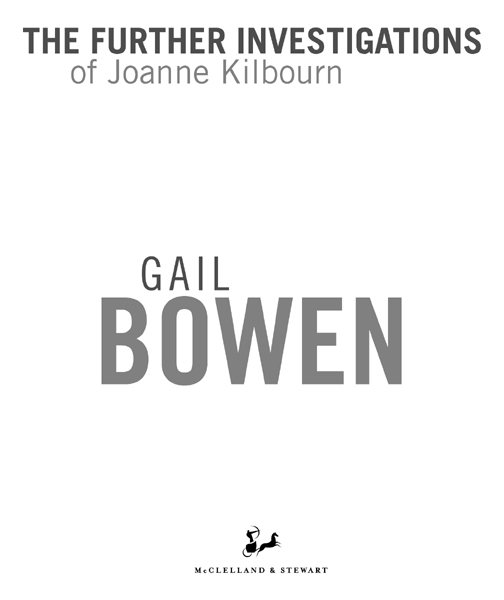 This omnibus edition published in 2006 by McClelland & Stewart

Contents: A colder kind of death – A killing spring – Verdict in blood.

Three minutes before the Hallowe’en edition of “Canada This Week” went on the air I learned that the man who murdered my husband had been shot to death. A technician was kneeling in front of me, adjusting my mike. Her hair was smoothed under a black skull-cap, and she was wearing a black leotard and black tights. Her name was Leslie Martin, and she was dressed as a bat.

“Check the Velcro on my wing, would you, Jo?” she asked, leaning towards me.

As I smoothed the Velcro on Leslie’s shoulder, I glanced at the
TV
monitor behind her.

At first, I didn’t recognize the face on the screen. The long blond hair and the pale goat-like eyes were familiar, but I couldn’t place him. Then the still photograph was gone. In its place was the scene that had played endlessly in my head during the black months after Ian’s death. But these pictures weren’t in my head. The images on the
TV
were real. The desolate stretch of highway; the snow swirling in the air; the Volvo stationwagon with the door open on the driver’s side; and on the highway beside the car, my husband’s body with
a dark and bloody spillage where his head should have been.

The sound was turned off. My hand tightened on Leslie’s shoulder. “What happened there?” I asked.

Leslie turned towards the monitor. “I just heard part of it myself, but apparently that guy with the long hair was killed. He was out in the exercise yard at the penitentiary and someone drove past and shot him. He was dead before he hit the ground.”

She stood and moved out of camera range. “Two minutes to showtime,” she said. Through my earpiece, I heard the voice of the host of “Canada This Week.”

Beside me, Senator Sam Spiegel laughed. “Trick,” he said.

“Okay,” the voice from Toronto said. “We’ll start with
NAFTA.”

Sam groaned. “Why do we always have to talk about
NAFTA?”

The host’s voice was amiable. “Ours is not to wonder why, Sam. Now, I’ll go to you first. Is the fact that environmental regulations aren’t being equally enforced by our trading partners having an impact on investor confidence up here?”

Another voice, this one young and brusque, came through the earpiece. “This is Tom Brook in Toronto. Washington, is there any sign of Keith yet?”

I looked over at the monitor. The image of my husband’s body had been replaced by images of Keith Harris, the third member of the “Canada This Week” panel. Keith was late, and as he slid into his chair and clipped on his lapel mike, he grinned apologetically. “I’m here. In the flesh, if not yet in the spirit. We’re in the middle of a storm, and I couldn’t get a taxi. Sorry, everybody.”

The sight of Keith’s private face, unguarded and gentle as his public face never was, stirred something in me. Until three weeks earlier, Keith had been the man in my life. At the outset, he had seemed an unlikely choice. We had both lived lives shaped by party politics; philosophically, we were as far apart as it is possible for reasonable people to be. Somehow, after the first hour we spent together, that hadn’t mattered. Keith Harris was a good man, and until he had taken a job in Nationtv’s Washington bureau at the beginning of summer, we had been happy. But distance had divided us in a way politics had not. Passion became friendship, and when Keith came to Regina for Thanksgiving he told me he had met someone else. I was still trying to sort out how I felt about that news.

The monitor switched to a picture of Sam and me. Through my earpiece, I could hear Keith’s puzzlement. “Sam, what are you doing in Regina?”

“I came in with the prime minister yesterday and decided to stay over. I thought it would be fun to be with Jo in person for a change.”

“Wise choice,” Keith said. “I wish I was with you guys. It’s colder than a witch’s teat down here.”

In our studio, the man behind the camera, sleek in a spandex skeleton costume, held up five fingers, then four, three, two, one, and the red light came on. We were live to the East Coast.

I felt as if I had turned to wood. I missed my first question, and Sam Spiegel gave me a quick, worried look, then picked up the slack. When we broke for a commercial, he touched my arm. “Are you okay, Jo?”

On the monitor, Keith was saying, “Come on, Jo. It’s starting to sound like the Sam Spiegel show out there. The only reason I showed up tonight was to hear your voice.”

“Five seconds,” said the man in the spandex skeleton suit. He held up five fingers and started to drop them again.

Sam touched my arm. “I’ll set you up. Tell about that screwup with the microphone when the P.M. was in town yesterday. It’s a great story.”

The red light went on. Sam turned the discussion to the prime minister, and I told the story of the microphone that picked up some of the P.M.’s private and earthy musings about the U.S. president and broadcast them province-wide. My voice sounded odd to me, but Sam was right, it was a great story, and as I finished, the moderator’s laughter rumbled reassuringly through my earpiece. We moved to other topics. I could hear my voice, remote but seemingly assured, suggesting, responding. Finally, the man in the skeleton suit held up his fingers again, and the red light on the camera in front of me went dark. It was over.

I turned to Sam. “Thanks,” I said. “I was glad you were here tonight.”

The producer, Jill Osiowy, came out of the control booth and said, “Good show, guys.” Then she looked hard at me. “God, Jo, you look whipped. Is something wrong?”

I unclipped my microphone. “The monitor picked up the last few minutes of the news before we went on,” I said. “Kevin Tarpley was shot today.”

“And you were sitting here watching. Shit. Is there anything I can do?”

“Get them to run that tape with the sound, would you? All I saw was the pictures.”

She looked at me dubiously. “Are you sure?”

We went into an editing room and stood behind Leslie Martin as she brought the five o’clock news up on a monitor. It was a surreal moment. The woman in the bat suit conjuring up the image of my husband’s killer.

When the boy with the goat’s eyes appeared on the screen, I had trouble absorbing what the news anchor was saying. His words seemed to come at me in disconnected units. “Convicted murderer Kevin Tarpley … twenty-five … assailant unknown …”

He was twenty-five. He had been nineteen at the trial. When he stood up for sentencing, his hands were trembling, and I was filled with pity. Then I had remembered what those hands had done, and it hadn’t mattered how young he was. I wanted him dead.

I had wanted him dead, and now he was.

More words came at me from the
TV
screen. “Police are baffled … model prisoner … born again … spent days and nights reading the Bible …”

The goat-eyed boy vanished, and the snowy highway filled the screen again. The polished voice of the news anchor continued, and I tried to make myself focus. He was talking about my husband. “Twenty-eight when he was named to Howard Dowhanuik’s cabinet … the country’s youngest attorney general … believed by many to be the man who would succeed Dowhanuik …” The anchor’s handsome face filled the screen. Leslie Martin looked up. Jill nodded and the screen went blank.

Jill put her arm around my shoulder and gave it a squeeze. “I’ll walk you to the door.”

The lobby of Nationtv is a three-storey galleria with a soaring ceiling and glass walls. In the daytime, the area is
filled with natural light, and the elm trees on the lawn outside make shadowy patterns on the terrazzo floor. But that night as Jill and I came upstairs from the
TV
studio, the sky was darkening, and the leafless trees were black against the cold October sky.

All Hallow’s Eve. Reflexively, I shuddered. A man and two women came through the entrance doors into the lobby. I knew them; they had been in the Legislature with my husband. They were all out of politics now, but it was politics that brought them to Nationtv. Politics and auld lang syne.

The year before, after ten years in the wilderness, we had won the provincial election. People were feeling good about the party again, so it was time to raise money. The following Wednesday, we were holding a roast for the former leader and one-time premier, Howard Dowhanuik. After he resigned as leader, Howard had moved to Toronto to teach constitutional law at Osgoode Hall. It was a long way from the rough and tumble of Saskatchewan politics, but Howard hadn’t forgotten that even successful election campaigns have to be paid for. Despite his loathing for testimonials, he was coming home. I was emceeing the dinner, and I’d asked Jill to arrange for some of the members who’d served in the Legislature with Howard to tape a segment of a local show called “Happenings” to publicize the event. The taping was that night.

For a beat, Howard’s former colleagues stood in the doorway, unbuttoning jackets, accustoming their eyes to the light. Then Craig Evanson spotted me and started across the cavernous lobby. The others followed.

Craig was fifty years old, but he still moved with the loose-limbed shamble of an adolescent. When he reached out to take my hand, his fingers grazed my shoulder.