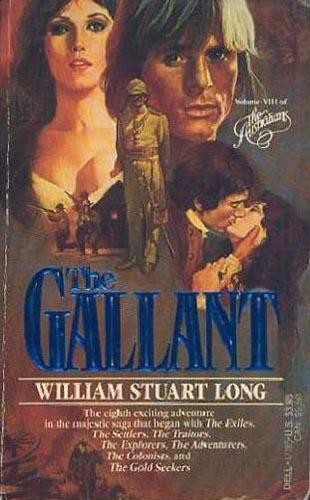 Created by the producers of The Kent Family Chronicles, Wagons West, and Stagecoach, Chairman of the Board: Lyle Kenyon Engel Published by Dell Publishing Co., Inc. 1

Produced by Book Creations, Inc. Chairman of the Board: Lyle Kenyon Engel

All rights reserved. No part of this book may be reproduced or transmitted in any form or by any means, electronic or mechanical, including photocopying, recording or by any information storage and retrieval system, without the written permission of the Publisher, except where permitted by law.

Printed in the United States of America July 1986

This book is dedicated to the memory of a young Australian, known most deservedly as “Brave Charlie,” who, very sadly, lost a gallant battle against cancer.

To me, Charlie was the epitome of gallantry; I felt privileged to know him, and I shall never forget him for the courage he displayed in that long struggle, which, in the end, took his young life.

As always, I acknowledge very gratefully the guidance received from Lyle Kenyon Engel in the creation of this book, as well as the cooperation and help of the editorial, research, and publicity staffs at Book Creations, Inc., of

Canaan, New York, and in particular that of my editors, Philip D. Rich and Glenn Novak.

I also greatly appreciate the friendship and encouragement so generously given by Maria and George Engel, Carol Krach, Jean

I should like also to put on record my appreciation of the help given me by my British publisher, Aidan Ellis of Aidan Ellis Publishing Ltd., by Dell USA and Macdonald Futura UK, the paperback publishers, and by the distributors of the Australian editions, Doubleday Australia Pty. and Hodder and Stoughton Australia. On my recent visit to Sydney I had reason to be most grateful to Ian Parry-Okeden of Radio 2 UE, to the Sydney booksellers in general and to Selwa Anthony in particular, and to the staff of Doubleday Australia for their hospitality and support. It is my hope that I shall be able to join the bicentennial celebrations in Sydney in 1988, reliving the story of the characters, both real-life and fictional, that I wrote of in the first book in

while being reunited with my much-loved Australian family in Hunters Hill and my good friend and invaluable Australian-based researcher, Vera Koenigswarter.

The History of Tasmania:

Notes of a Gold Digger:

The Indian Mutiny in Perspective:

(lucknow and Cawnpore). edited by G.w.

Blackwood, 1873. I have also taken the liberty of adapting, from one of my earlier works, material pertaining to the Sepoy Mutiny of 1857-8.

With the author’s generous permission, I made extensive use of

by Margaret Hazzard, Hyland House Publishing, Melbourne, 1984. This meticulously researched history of the penal settlements of Norfolk Island gives a view of the last commandant, John Price, that is not perhaps shared by everyone, but which my own research has led me to conclude is correct.

convicts and committed to “punishment [only]

short of death,” which he exercised to the full. By the standards of the period and granted the character of the convicts sentenced to penal servitude on Norfolk Island, a harsh regime had to be maintained; nevertheless, from the evidence available-including that of some of the convicts themselves and of the island’s onetime chaplain-Price does

appear to have erred on the side of severity.

I have fictionalized some of the diaries kept and books later written by Norfolk Island convicts, including that of Mark Jeffrey, and condensed these into a single record, which nonetheless is based on fact. For a factual account of the Norfolk Island penal settlement from beginning to end, however, I warmly recommend Mrs. Hazzard’s book.

series, is written as a novel, with fictional characters superimposed on the historical narrative.

The adventures and misadventures of the real-life characters are based on fact, and I have not embroidered or exaggerated the actions of any of them, save where it was expedient to dramatize these a little to avoid writing “dull” history. For the background information pertaining to the Port Arthur September 1828

bound from the port of Liverpool to Sydney. New South Wales, wallowed sluggishly in mountainous seas, the howling, gale-force winds driving her remorselessly off course to the Irish coast.

Securely battened down though she was, and with only storm canvas set, she seemed, to the only passenger who had ventured on deck, to be in imminent danger of foundering. Henry Osborne clung with numb fingers to the rail on the weather side of the upper deck, regretting the impulse that had led him to leave the warmth and comparative safety of the cuddy. But its smoke-filled airlessness and the pungent fumes of the alcohol some of his fellow passengers had been consuming had induced such queasiness in his stomach that, fearing this might overcome him, he had decided to go in search of fresh air.

Certainly it had cured his seasickness. But now, he reflected ruefully, he would have to remain where he was until wind and sea abated-or until the infernal ship capsized-for to cross the deck to the companionway from which he had emerged would be to risk life and limb to no avail.

he had been assured when he had booked his passage, was a sturdy, seaworthy brigantine of close on five hundred tons burden, well found and under the command of an experienced master, and until the storm had struck, he had had no reason to doubt that she was everything the shipping agent had claimed. Indeed, he-Henry braced himself, clutching at

his precarious handhold as the ship heeled suddenly, to plunge into the trough of a towering wave, her bluff bows and most of her fo’c’sle vanishing momentarily into its depth.

Tons of icy water cascaded across the deck, soaking him to the skin and threatening to sweep him off his feet. As the water drained slowly away, he heard the master bellow an order through his speaking trumpet to the two men at the helm. The wind seemed to Henry to bear the words soundlessly away, but evidently both helmsmen understood the import, for, between them, they spun the wheel and brought the ship’s head to the wind. Her bows rose, shuddering, and he felt the deck lift beneath his feet as, with an ominous creaking of her straining timbers, she gained the crest of the following wave and plunged on.

God in heaven, Henry thought, his stomach heaving anew, why had he embarked on this voyage halfway across the world? What mad, ambitious dream had led him to sell his farm at Dromore, in Ireland’s County Tyrone, in order to go out to Australia as a settler? True, his two elder brothers, Alick and John, had gone out there as naval surgeons and had urged him to follow them, stressing in glowing terms the prospects the colony offered to young men with the will to work and some capital behind them.

They had taken land grants-John at Garden Hill, sixty miles south of Sydney, with Alick nearby, at a place he called Daisy Bank-and he had the required capital with which to set himself up. He had a thousand pounds, raised by the sale of his farm, but-The

heeled over once again, flung almost onto her beam ends, and it seemed to Henry an interminable time before she righted herself and, pitching heavily, struggled on.

He groaned aloud, not caring who heard him. Worst of all, he reminded himself miserably, he had been compelled to leave behind his betrothed, the lovely Sarah Marshall, because of her parents’

objections to his decision to emigrate.

“Your future is too uncertain, Henry my dear boy,” the old rector of Dromore had told him, when he had endeavored to plead his case.

“Our daughter has been gently reared, in a safe, secure home background. Sarah is not suited to the rough life of

a pioneer, in the wilds of an unknown land, such as she would be called upon to face were she to become your wife. It is out of the question, and I must forbid it.”

“But we love each other, sir,” Henry had protested. He had added, although to no avail, that he would never have considered leaving his native Ulster had he for one moment supposed that Sarah would be forbidden to accompany him.

“You should have thought of that possibility,” the Reverend Benjamin Marshall had answered

uncompromisingly, “before you sold your land, my dear young man-and before you had advanced your plan to emigrate to the point of no return.”

He had been every sort of a fool, Henry told himself bitterly, remembering Sarah’s tears and her stricken face when he had paid his final visit to the rectory to bid her farewell. They had clung together, both of them too heartbroken for any words, and finally, when he had had to tear himself away in order to catch the Liverpool packet, she had whispered brokenly that she would wait for him. He heard her voice now, above the roar of the wind.

“Send for me. dearest Henry, when you are settled and have made your way in New South Wales. I will come, I swear it-whatever my parents say, or however long it may be!”

He wanted to believe her, but … Sarah Marshall was a beautiful, appealing girl. There would be suitors aplenty after he had gone-young men with better prospects than his had ever been. There was the lawyer, Patrick Hare, and a brace of well-off farmers, once his friends-Damien Hamilton, who was kin to Sarah’s mother, and, devil take him, Guy O’Regan, who would have a clear field now that his closest rival had left Dromore, with scant prospect of a speedy return or-A rending crash from somewhere above his head interrupted his thoughts, bringing his attention abruptly back to the present. Henry watched with horror as, silhouetted starkly against the gray, scudding storm clouds, the foremast lost the single sail it had borne and, split off at the cap, came hurtling down to the forward part of the deck in a welter of torn rigging and shattered spars.

The crew reacted with swift courage in response to the master’s shouted urging, and Henry found himself caught up in the

rush of men. Someone thrust an ax into his hand, and he hacked and tore at the wreckage with the rest of them, blind instinct guiding him, as the ship swung dangerously, broadside on to the pounding waves, the whole deck awash.

Their frantic efforts succeeded at last. The shattered topmast went by the board, and, relieved of its weight, the

answered to her helm, the pumps slowly ridding her of the water she had shipped.

Henry stood back, exhausted, aching in every limb, his hands blistered and bleeding. The master paused briefly beside him, his lined, weather-beaten face creased into a mirthless but approving smile.

“Good work, mister,” he said. “Thanks for your help.” He added, the smile fading, “We’re going to put in to Belfast to have that topmast replaced.

It’ll add a week or ten days to your journey, I’m afraid … but then, we ain’t none of us in that much of a hurry, are we?”

He stumped on, the speaking trumpet again raised to his lips as he bellowed a succession of

incomprehensible orders. Henry stared after him, unable at first to take in the meaning of what he had been told; and then, suddenly, his heart was singing.

A week in Belfast-ten days, perhaps … time enough, God willing, for him to ride back to Dromore and renew his pleas to Sarah’s parents.

Time enough, even if they again refused, to wed her without their consent.

The hand of God had surely brought him back, and the Reverend Benjamin Marshall could scarcely deny that it had been the hand of God that had preserved him, with the

and her passengers and crew, from the fury of the storm.