Read The Game of Fates Online

The Game of Fates 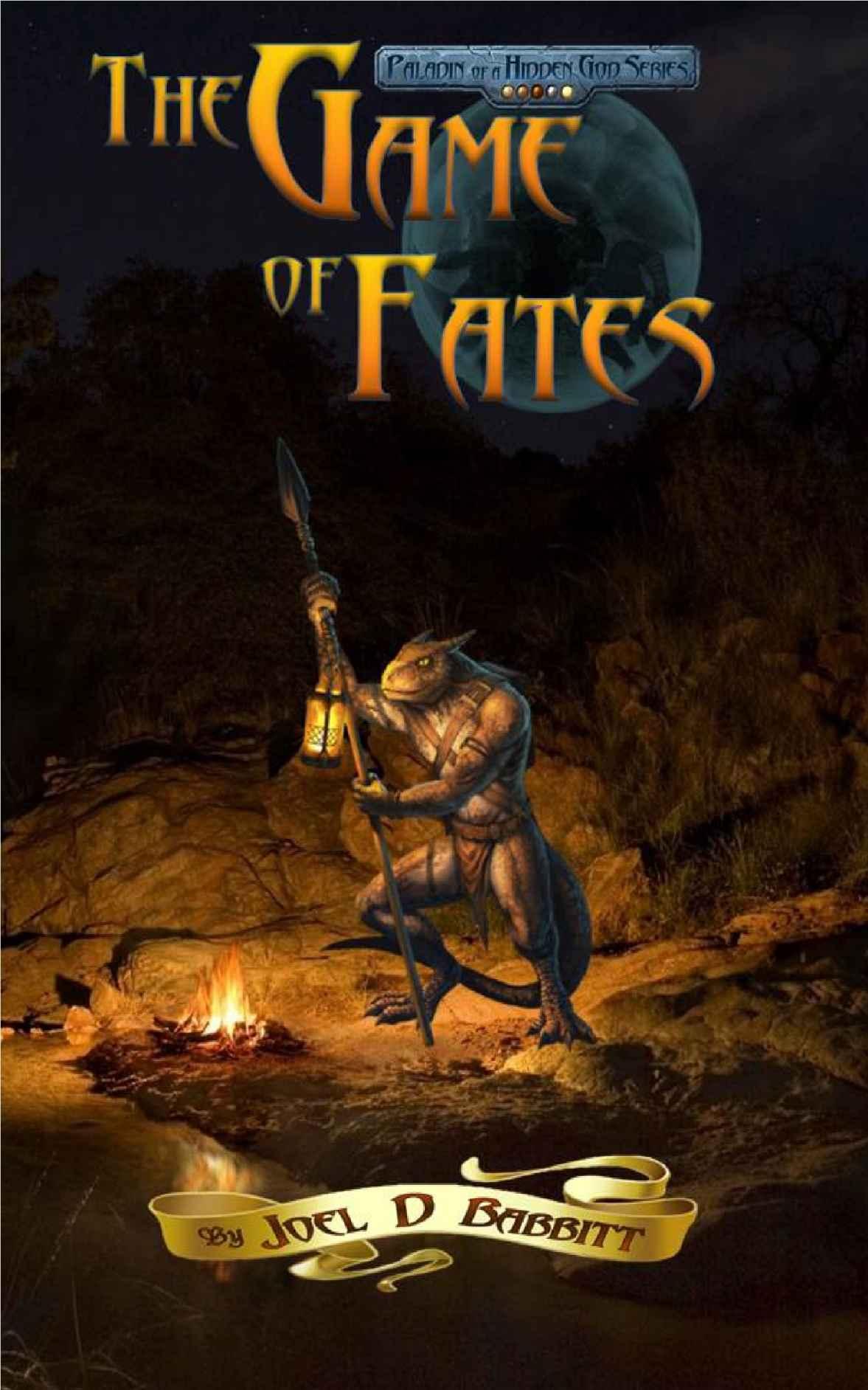 The Game of Fates

A novel by Joel Babbitt

The Conclusion
of the Immersive New Trilogy

Paladin
of a Hidden God

The Game of
Fates is a

Hand of the Fates

Against the Tide of Evil

Thanks first of all to my wife
and children for sparing me the time over the past 12 years to write this
series.  Thanks to all the many friends that have shared this journey, reading
manuscripts, playing the campaigns, and helping with editing.  Most of all,
thanks to you, the reader, for a book without readers is like an empty house;
all echoing walls and no laughter.  Enjoy, and may you find a portion of
yourself inside these pages.

This book is a work of fiction.
Names, characters, places and incidents are either products of the author’s imagination
or used fictitiously.  Any resemblance to actual events, locales or persons,
living or dead, is entirely coincidental.  All rights reserved.  No part of
this publication can be reproduced or transmitted in any form or by any means,
without permission in writing from the author.

Available
from Amazon.com and other retail outlets in print.  Available electronically on
Kindle and other devices.

Paladin of
a Hidden God Trilogy:

The Trials
of Caste

Into the
Heart of Evil

The Game of
Fates

Get a FREE Short Story at
AuthorJoel.com:

Kobolds of the Southern
Gens…

Lord
Krall
, Lord of
the Krall Gen.  A rather gruff older kobold who watches carefully after his
gen.  His no-nonsense style of leadership is harsh and unforgiving, especially
for his sons.

Lady
Karaba
, Lady of
the Krall Gen.  She is Lord Karthan’s older sister, but in a deal to cement the
relationship between the two gens, she was given to Lord Krall.  The Krall
Stone has chosen her to be its oracle, which fits well with her unofficial role
of gen lore master.

Krall
and Morigar
,
Sons of Lord Krall.  Krall is a trusted warrior leader and Lord Krall’s heir.
Morigar, on the other hand, is neither of those and everyone knows it but him.

Lord
Karthan
, Lord of
the Kale Gen.  A visionary leader who would do anything for his people… if he
can but hold on to power.

Khee-lar
Shadow Hand
,
Kale Gen leader caste.  A warrior leader whose desires for power have led him
to organize a secret society bent on overthrowing the Kale Gen.  As a
descendant of a nephew of the last Lord Kale, he claims right of rulership over
the gen.

Khazak
Mail Fist
, Lord
Karthan’s Chamberlain and Honor Guard Warrior Group Leader.  He is the
strongest kobold in the gen, and arguably the best warrior the gen has ever
known.  He is loyal to a fault and would do anything for Lord Karthan, his
master.

Durik
, leader of Durik’s Company and
Oracle Apparent of the Kale Gen.  Exalted to the leader caste in the Kale Gen.
Chosen servant of an unseen deity.  He seeks to reunite his gen, even as the
greatest armies ever to trample the southern valley seek to tear his gen apart.

Kormach
Manebrow
,
Durik’s Second.  Devoted husband and father, veteran warrior, reluctant
adventurer.  He doesn’t play much in the world of politics or magic, preferring
to focus his efforts on ensuring his warriors are ready for any challenge they
must face.

Trallik
, outcast from the Kale Gen.  One
of Khee-lar Shadow Hand’s lackeys, Trallik was caught in the act and couldn’t
follow through with an assassination.  He lacks character, and now he lacks
friends and a home as well.  His quest for redemption will leave few lives
unaffected.

Jerrig
Queen Slayer,
Warrior in Durik’s Company.  Jerrig is the unlikely hero whose strange
connection to magic manifesting at just the right moment helped him slay the
ant queen.  That single act has sparked a total war in the southern valley.

O
n the ever changing sea of glass
and fire that was His home, the Man sat contemplating the events of the last
rotation.  Here, in His home where all the elements obeyed Him perfectly and
yearned only to do His will, time was such a malleable thing.  There, however,
in the world where He had spent His mortal probation, a thousand years were
nearing their close.  Had He prepared those whom He had left behind adequately
for the challenges that would soon shatter the uneasy balance of their world?
Had He armed them with knowledge and tools enough to handle the extreme
challenges of the twilight years of this millennium?  He desired to determine
how far the free-will of the Creator’s children had altered the course He had
set them on, and to see if there was a need for adjustment.

In
front of Him the floor rose up in arcs of splendid fluidity to form a frame for
Him to hold their destinies.  Suddenly, with the utter clarity that accompanies
pure knowledge, forms and shapes, and more especially paths and characters were
laid out before Him with all of their subtle shifts, their inherent
instabilities, and their ever-so-final failings.  Perceiving the intentions of
those whom He called His servants, He found them to be true, yet blinded by
their own circumstances and their inherent mortal weaknesses.  Perceiving the
will of His children, He found it to be turned too much inward; focusing almost
solely on the mundane, having almost completely forgotten their higher
purposes.

As
the Man gazed upon the face of Dharma Kor, He perceived the stirrings of evil,
the corruption of the races, and the spoiling of noble virtues.  Yet, among all
that was not in accordance with the will of the Creator, still there was pure
love without designs, still there was selflessness mixed with determination,
and even among the dark, loathsome races still there were some who had a desire
to receive light and truth, though few and scattered they remained.

He
knew, if the good was to withstand the evil which surely would be unleashed
upon Dharma Kor, that the time was now right to send His final servants; the
chosen ones.  First among them would be the prophets.  Then would come those
who would lay the foundations for a restoration.  Finally, and right before the
time of decision, He would send His final servants, those whose call it would
be to bring about His will during such dark times.

According
to the perfect pattern set by the Creator, power would begin to flow, not only
to His servants, but to all around them.  Already there was much power given to
the world of Dharma Kor through the ancestors and the Covenant He had made with
that great sphere in the days of His mortality.

But
the power of the ancestors was fickle, for not all of the ancestors were true;
indeed, many of them had fallen away from Him and the Creator.  Still, even
these would unwittingly serve His purposes.  As for the power He gave through
the Covenant in the days of His mortality when He had been called The Sorcerer,
in like manner He had taken it back from all the races save His children.  But
even they had mostly laid it aside and forgotten the powers given them.

Though
these things weighed heavily on His heart, he lifted up His head and rejoiced,
for soon He would see the restoration of His children, before the races were
gathered.  Soon He would see a returning of His children’s will to His
purposes, in preparation for the dark times that were about to break upon the
face of Dharma Kor.  Soon, a child would be born, and through him He would
gather His children.

Turning
toward the ball of white crystal that was His communing stone, the Man placed
His hand gently upon it.  He felt the approbation of Him whom He served,
accompanied by the subtly sweet love of she whom He had left behind to watch
over their children.  His will was one with that of the Creator—and with the
birth of a child thought became deed, and spirit became flesh.