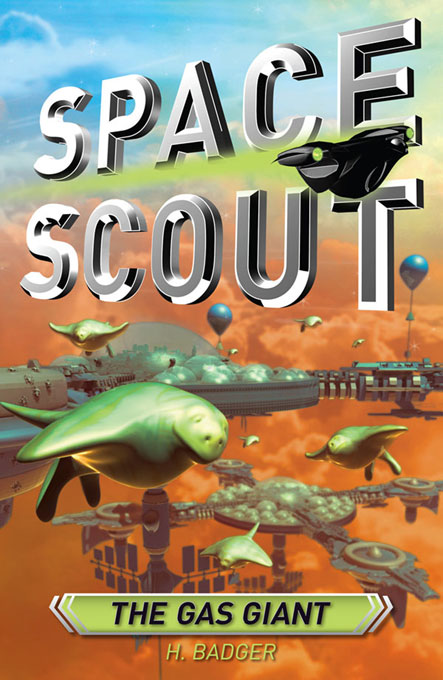 Kip Kirby was standing in total darkness. He held his breath and watched as the door across the room slowly creaked open.

‘SURPRISE!’ Kip shouted as the lights came on. Twelve other kids shouted with him, leaping out from hiding places all over the room.

Kip’s best friend Jett jumped in surprise. Then, recovering, he looked around the room and grinned at his friends.

It was Jett’s 12th birthday. His parents were throwing a surprise party in their family’s apartment, high on the 1,987th floor of the building.

‘Happy birthday!’ Kip said, walking over to Jett and handing him a present.

‘Thanks!’ Jett took the present and the wrapping paper automatically dissolved.

‘Now we can still chat when I’m out on missions,’ said Kip.

He knew it was a pretty cool present. Holographic walkie-talkies could be used anywhere in the entire universe. They beamed a 3D hologram of the person at the other end, so you could see and hear them.

Jett’s other friends crowded around with their presents. After Jett had opened everything, his mum brought out his birthday cake. It was shaped like an Enforcerbot, a law enforcement robot. Jett was really into robots — the more high-tech, the better.

Once everyone had sung ‘happy birthday’, Jett cut the cake. White fog drifted out from inside it.

VapaCream was a creamy filling that turned to gas when it was released from inside a cake. Kip, Jett and all their friends chased the delicious gas around the room, trying to catch it in their mouths.

This party is awesome!
Kip thought.
Wish I got to hang out like this more often
.

Kip was busier than most kids. On top of school, he had an important job as a Space Scout. He and 49 other Space Scouts searched the Universe for a new Earth.

It was the year 2354, and Earth’s population was huge. In fact, it was
so
huge that the planet was running out of vital supplies like water.

The Space Scouts’ job was to find another Earth, quickly. The future of all humans depended on it.

Kip let the last of the VapaCream drift into his mouth. Just then, the SpaceCuff on his wrist started vibrating. SpaceCuffs were powerful mini-computers that received messages, translated alien languages and played the latest games. Space Scouts depended on them during their missions. 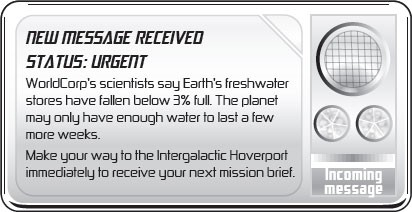 Kip’s stomach lurched. Space scouting had always been an important job. Now it sounded like it was critical.

Supernova was Kip’s all-time favourite drink. It was just like a normal fizzy drink except the bubbles were bigger than marbles, making it
extra
gassy. ‘Thanks,’ said Kip, gulping it down. ‘But then I gotta go. New mission!’

‘Do your party trick before you go!’ Jett begged.

Kip really wasn’t in the mood, but it
was
his best friend’s birthday.

Kip let out an almighty belch. Jett cracked up laughing.

At that exact second, Jett’s mum walked by with a bowl of Jupiter Juice-flavoured lollies, and accidentally bumped Kip’s elbow. Supernova sloshed out of the bottle and onto Kip’s SpaceCuff. It seeped into every cranny and dried in a sticky blotch all over the screen.

Uh-oh!
Kip thought.
That’s gotta be bad for the circuitry
.

Kip told her it was OK, but inside he was worried. There wasn’t time for repairs. He had to get to the Intergalactic Hoverport. But there was an emergency SpaceCuff repair kit onboard MoNa, so maybe he’d be able to fix it on the way to his mission.

‘Gotta go,’ Kip said to Jett. ‘Thanks for the awesome party.’

Kip knew his best friend was disappointed, but Jett just smiled and waved goodbye. He knew how important Kip’s job was.

‘Bring me back a souvenir!’ he said.

Kip kept his mission gear with him at all times. He grabbed his new spaceboots from his backpack. They were electric-yellow Plan-It Suckers with retractable suction caps on the soles.

Next, Kip threw on his spacesuit over his shorts and slid his new helmet onto his head. The helmet had been delivered the day before from WorldCorp. Kip had heard a rumour from the other Space Scouts that the new helmets weren’t very strong.

Seems fine though
, Kip shrugged, tapping the helmet. Anyway, it would just have to do. Kip had a planet to save!

Kip blasted off from the roof of Jett’s building in a Universal Taxi (or UniTaxi for short). These self-piloting personal spacecraft were the perfect way to travel quickly within Earth’s atmosphere.

Soon Kip reached the Intergalactic Hoverport, ten kilometres above Earth. All flights beyond Earth’s atmosphere departed from the Hoverport. Kip’s starship, MoNa 4000, was docked there between missions.

MoNa was massive, and specially designed for extreme deep-space travel. She was shiny black with curved thrusters and a pointed nose, and was decked out with all the latest technology. The problem was, MoNa was also super bossy. She
loved
to remind Kip that he was way younger than the other Space Scouts.