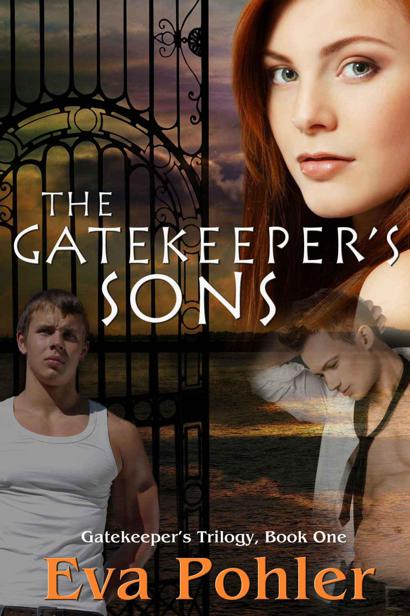 This book is a work of fiction. The characters, happenings, and dialogue came from the author’s imagination and are not real.

Library of Congress Cataloging-in-Publication has been applied for

Eva Pohler writes fiction and teaches writing and literature at the University of Texas at San Antonio where she lives with her husband, three children, two dogs, and two rats. Please check back for books two and three in her Gatekeeper’s Trilogy:
The Gatekeeper’s Challenge
(December 2012) and
The Gatekeeper’s Daughter
(December 2013). The first book of her second series,
The Purgatorium
, will be released May 2013. Check her website for details at
http://www.evapohler.com
. Her adult novel,
The Mystery Box
, can be found there as well.

I would like to thank my parents, Cathy and Joe
Mokry; my siblings, Lisa Hubacek, Rachel Mokry, and Jody Mokry; my husband, David Pohler; and my three children, Mason, Travis, and Candace Pohler. Without them, this book would not have happened. I would also like to thank my book cover designer, Melinda Van Lone, my grandparents, aunts, uncles, nieces, nephews, critique group, and book club for their help and support. Finally, I would like to thank Alice Walker for this inspirational quote: “The most common way people give up their power is by believing they have none.”

Chapter One: The Drowning

T
herese Mills peeled the white gloves off her sweaty hands as soon as she and her parents were in the car. Now that her mother’s thing was over, she could finally get home and out of this blue dress. It was like being in a straightjacket.

Anything for Mom, of course
.

A man glared at her through her backseat window. She jumped up, sat back, blinked. The man vanished, but when she blinked again, she could still see the eerie face behind her lids: the scruffy black beard and dark, haunting eyes.

“Thanks again for making tonight so special,” her mother, apparently not seeing the man, said from the passenger seat as her father started the engine. “You two being there meant a lot to me.”

“Did you see that man?” Therese peered through her window for the face.

“What man, Therese?” her father asked.

Therese did not find it unusual that her mother hadn’t noticed the man. Although her mother was a brilliant scientist, she wasn’t the most observant person.

Just last spring after all the snow had finally melted around their house in the Colorado mountains, and Therese and her mother had been able to enjoy their wooden deck with the melted lake spread out in front of them and the forest rising up the mountains behind them, Therese had spotted the wild horse and foal she had seen just before winter. They both had reddish brown coats with a white stripe between their eyes, the foal nestled beside its mother’s legs, staring intently at Therese without
moving. The animals stood beneath one of two magnificent elm trees ten feet from their back door—the tree her mother said had gotten the Dutch elm disease. Therese relaxed with her mother at the wooden table on the deck, each of them with a mug of coffee in the bright Sunday morning. Her mother had the paper but wasn’t reading it. She had that look on her face when she was thinking of a scientific formula or method that she planned to try in her lab. Therese stared again at the horse and didn’t move. She whispered, “Mom.”

Therese looked from the beautiful creatures to her mother, who sat staring in space, transfixed, like a person hypnotized.

“Mom, are you deaf?” she blurted out, and then she heard the horses flee back up the mountain into the tall pines. She caught a glimpse of the foal’s reddish-brown rump, and that was that.

As Therese strapped on her seatbelt, she also considered the possibility that she had only
imagined
the man in the window. She was, after all, prone to use her imagination and fully capable of making daydreams as real as reality, as she had, just now, with her memory of the horses.

Her phone vibrated. A text from Jen read, “Heat sheets r n call me when u get home.” Awesome, she thought. Therese was anxious to see who would share her heat in tomorrow’s championship meet. She hoped she would be swimming breaststroke in the top heat against Lacey
Holzmann from Pagosa Springs. She wanted to beat her this time.

She searched outside her window for the scruffy face but saw only a line of headlights as others, like they, exited the parking lot of the concert hall. Maybe she
had
only imagined the man. It was getting dark. The mountains across campus were barely visible as dusk turned into night.

“W
e’re both so proud of you, Honey,” Therese’s dad said from behind the wheel.

Therese probably got her imaginative talent from her father, who was a successful crime fiction writer. As soon as his first book made the
New York Times
bestsellers list, he moved his family out into their big log cabin in the San Juan Mountains.

Therese saw her father eyeing her in the rearview mirror. “Aren’t we, sweetie pie?”

She wondered at her father’s need to praise her mother all the time. Didn’t her mother already know she was brilliant and that her husband and daughter looked up to her? “Absolutely. You’re awesome, Mom.”

She cringed and murmured, “
Oooh. How gross.” She couldn’t believe he had got her number. He had been stalking her around campus just before school let out for the summer.

Before she had a chance to delete the text, Therese heard the rear window behind her head explode. “What the…” Glass shards pricked at her neck and bare shoulders. The car swerved left and right. She looked back to see the window behind her busted. The line of headlights had dispersed into chaos, horns blasting, people shouting.

“What the hell was that?” her father yelled. “Oh my God! Linda! Linda!”

Another explosion rang out, and something zipped just past Therese’s head.

“Therese? Are you okay? Get down!”

“What’s happening? What’s going on?” Therese cowered in the back seat as a third explosion sounded, this time near the windshield. Therese could barely breathe. She gasped for air, her heart about to explode.

“Stay down! Someone’s shooting at us!” her father shouted.

The car swerved, slowed, and turned. The smell of burned rubber permeated the air. Therese’s head whipped back as her father gunned the accelerator. Her fingers trembled so wildly, she was barely able to punch the correct numbers on her phone. She messed up twice and had to start over. Finally she pressed them in slow motion: 911. It seemed an eternity before a woman answered on the other end.

“Nine-one-one, is this an emergency?”

“Someone’s shooting at us! You’ve got to help us. We’re leaving Fort Lewis College. Dad, where are we?”

“Huck Finn Pond!” Therese screamed into the phone as the car swerved, her seatbelt digging into her hip. Then she noticed the blood dripping down the back of her mother’s neck and onto her mother’s silk scarf. “Oh, my God! Mom? Mom, are you okay?”

A crushing sound shot through the car, and Therese felt herself jolted hard to the right. She hit her head on the window and dropped the cell phone. When she bent over and tried to pick it up, the back end of the car lurched upward like a seesaw, and her head hit the back of her mother’s seat in front of her. She sat up and saw they were sailing through the air over the lake. The front end of the car hit the water, causing her head to flop forward and back. She heard the air hissing through the airbags as they inflated in the front end. She was so stunned, she couldn’t speak. She watched in silent shock as water crept into the front end of the car, up to her father’s neck, the untied bowtie of his tuxedo floating
around him. The front airbags pressed against her father’s cheek, her mother’s face. Water spilled over the front seat and onto the floorboard in back where she sat elevated higher than her parents.