Read The Gentlemen's Club: Volume One in the 'Noire' series Online

The Gentlemen's Club: Volume One in the 'Noire' series 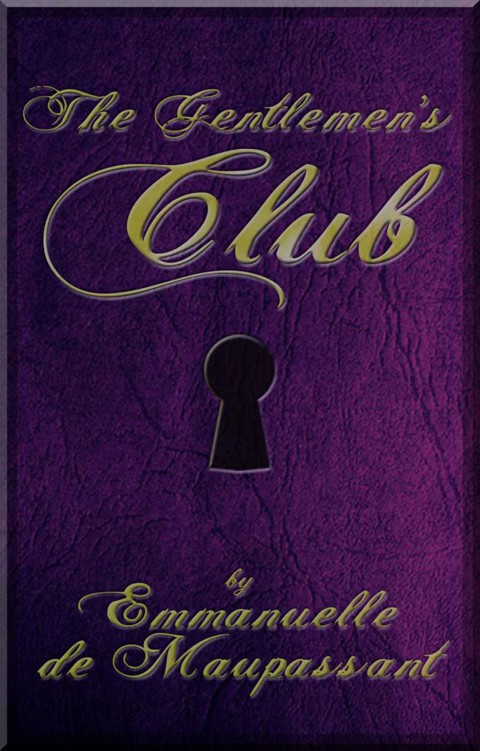 Volume One in the ‘Noire’ series

Chapter Two – A Flower Not Yet in Bloom

Chapter Fourteen – A Mirror to the Soul

Chapter Fifteen – At the Mercy of Love

On passing through a certain curtain and a certain door, pleasure, pain,
humiliation and titillation could be enjoyed in the company of ladies who
returned the virile salute of desire with the same enthusiasm in which it was
given. They wielded power over men, whether in domination or submission, and
embraced the exquisite surrender of being watched by many eyes.

Lord
MacCaulay
becomes obsessed with the
mysterious Mademoiselle Noire, despite suffering the ultimate humiliation at
her hands. His pursuit of her brings about a descent from which there may be no
escape.

Extracts from this book, and other works by the author, may be sampled at
www.emmanuelledemauspassant.com

Feedback and reviews are always welcome.

Names, characters, places and incidents are either
used fictitiously or are the product of the author’s imagination.

Any resemblance to actual persons, living or dead, is
coincidental.

This publication may only be reproduced, stored or
transmitted with prior permission in writing from the author, or in accordance
with the terms of licenses issued by the Copyright Licensing Agency.

The right of Emmanuelle de Maupassant to be identified
as the Author of this Work has been asserted by her in accordance with the
Copyright, Designs and Patents Act 1988.

The 19
th
century
was perhaps the time of greatest prudery and hypocrisy regarding women’s sexual
identity. Those who strayed from the path of purity, indulging in sex outside
of marriage, were referred to as ‘fallen women’.

While it was expected that men would
indulge their sexual impulses widely, regardless of wedlock, it was unthinkable
for a ‘genteel’ woman to even admit to enjoyment of her marriage bed. For her
to express undue interest was a sign of wantonness. In extreme cases, she might
be referred to an asylum for treatment of this perversion.

By the turn of the century,
it was estimated that London alone boasted at least 100,000 women working in
prostitution. Meanwhile, the use of rubber caps (womb veils) allowed women to
gain some control over pregnancy.

The Club was exclusive: its
true nature so secret that few but those in the upper echelons of society knew what
lay beyond certain doors. Its membership was elite, the fees reassuringly high,
and the rules strict without exception. Every member was to arrive and leave
without drawing undue attention. They would never speak of the true nature of
the club and avoid discussion of the identity of other members.

To all intents and purposes,
it was a modest Gentlemen’s club, offering quiet refuge from the bustle of
business: a place where a chap might read the papers in peace, over coffee or
brandy. A fair steak, pea soup and apricot tart could be had.

However, on passing through a
certain curtain and a certain door, all wore half-masks of velvet.

Pleasure, pain, humiliation and
titillation could be enjoyed in the company of ladies who returned the virile
salute of the lusty penis with the same enthusiasm in which it was given. They welcomed
the bounteous gifts bestowed upon them and, of course, in catering to such
whims, were well enumerated. Nevertheless, financial reward was far from their
only incentive.

Without exception,
the ladies of the Club’s harem remained at the establishment longer than was
necessary to amass a goodly amount of capital (such as would be sufficient to
open their own hat shop). In most cases, personal cravings kept them in
continued service. They satisfied their own carnal thirst and took delight in
wielding power over men, whether in domination or submission. Theirs was the
sweet surrender to the lust of others. They thrilled to each assailant’s finger,
tongue or member, and the knowledge of being watched by many eyes only enhanced
their fervor.

One night, when London sat
damp under autumn drizzle and all respectable gentlefolk were either before
their fires or in their beds, Lord
MacCaulay
, handsome
in full evening dress, took his carriage from his fashionable residence on
Eaton Square, Belgravia, for the
five minute
journey
to his Club.

He’d endured a dull
few hours in the company of the great and the good, including his uncle, the
Duke of
Mornemouth
.
MacCaulay
enjoyed a good income and his responsibilities were few, but humoring relatives
remained necessary. Duty done, it was now his time: time to indulge himself.

The luxurious salon on the
second floor of the Club, furnished in plush velvets and damasks, and the floor
spread with thick Persian rugs, was lit by a chandelier of black glass and by
the dim glimmer of lamplight. A dozen men were seated in armchairs placed in a
semi-circle; despite their half-moon masks, he recognized them all.

Lord
MacCaulay
ordered a large whisky and settled himself comfortably. The Master of Ceremonies
entered and bowed, bidding the Gentlemen welcome and assuring them that tonight
would be particularly memorable, as they were
honoured
to present Mademoiselle Noire. She would be gracing their Club over coming
weeks, orchestrating a variety of entertainments for their amusement.

The lady in question entered,
sweeping around the outer circumference of the room, where the shadows clung
thickest, so that her visage was not immediately apparent.

Her skirts brushed the back of chairs and
she paused behind each gentleman, as if to stroke the nape of a neck with her
gloved hand; yet, she did not. Her scent trailed behind: something woody and
musky, with a hint of bergamot. It was an unusual choice for a woman.

Her circuit complete, she
stepped forward, and
MacCaulay
saw that her costume
was that of evening dress, a black taffeta gown, revealing shoulders and a
little décolleté but otherwise modest. Her waist was cinched tightly, as was
the fashion, and her skirts were full. Black evening gloves covered most of her
arm, and, in one hand, she carried a riding crop. The swell of her breasts and the
form of her hips beneath the silk indicated a fuller figure.

Her skin was luminous in the
lamplight, ivory pale. An abundance of auburn hair was pinned high, every lock
placed precisely. Her eyes, framed in a guipure lace mask, glittered darkly.

Imperiously, she clapped her
hands: at which a statuesque African, black as night, entered from behind the
drapes, clad only in a leather hood. He took his place beside her, standing entirely
naked. His muscular body showed every sinew straining beneath taut, well-oiled
skin. His upper arms were the width of most men’s thighs and his torso and
abdomen were
well-defined
: he was the epitome of
physical accomplishment.

Moreover,
every hair had been removed from his body, so that the muscles in his chest stood
boldly and his member proud, unveiled of pubic hair. Its full length was
visible: perhaps 10-11 inches, and greater in girth than any woman’s hand could
encompass. It hung heavily between his thighs.

Mademoiselle Noire let her
eyes wander over this godlike creature, her ebony savage. She flicked her crop
lightly at the dark giant’s phallus, a small smile playing on her lips. The
tail end, with its various fringes of leather, made contact with the tender
skin but his face betrayed no discomfort.

She wielded the crop again, a little harder this time, catching him full
along the length of the shaft.

His dark truncheon began to
engorge, growing in girth and length. The crop struck again and, this time,
brought the beast between his legs to full maturity: a python easily 12 inches
in length and larger than even a man’s hand might encircle.

Mademoiselle Noire now bade
him turn so that his tight buttocks were displayed to her - each sculpted to
perfection: a midnight shadow of Michelangelo’s David. She commanded him to
bend over and part his legs, so that his dark testicles hung huge and low. It
was a view at once familiar yet disturbing, thought
MacCaulay
.

She reached down and grasped them gently
in her silk-gloved hand, stroking and caressing them, kneading them like the
dough of bread rolls ready for the oven. Having uttered no sound until this
moment, the mighty creature now let forth a low groan: one of undoubted
pleasure.

The men about the room
shifted a little in their seats.