Read The Ghost in the Tokaido Inn Online

The Ghost in the Tokaido Inn 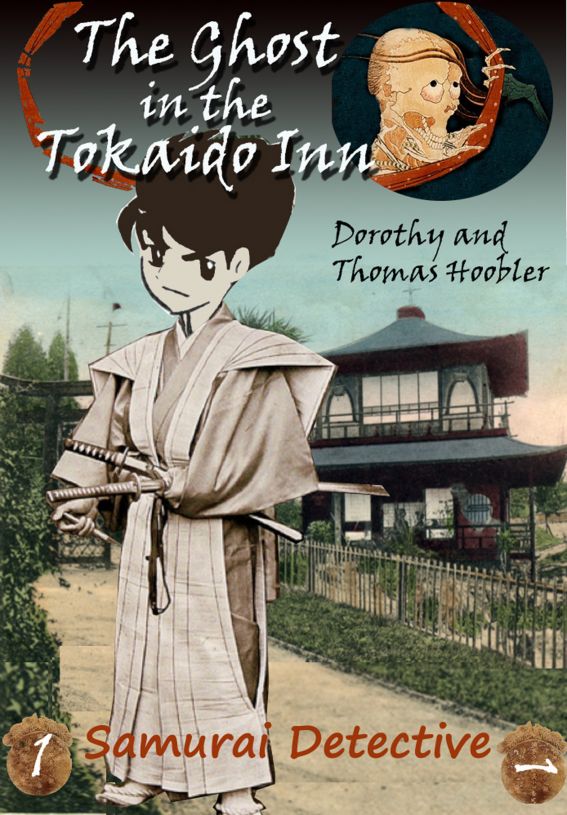 by Dorothy and Thomas
Hoobler

The Ghost in the Tokaido
Inn

The Demon in the Teahouse

The Sword That Cut the Burning
Grass

“With a sharply authentic voice and an adeptly plotted story
that progresses from the haunting ghost legend to the dark,
volatile world of a traveling kabuki show, this mystery builds with
stirring intrigue and plays out to a most satisfying
conclusion.”
—Booklist

♦ “
The Hooblers
employ suspense, action, superstition and mystery to entrance
readers with this tale of 18th century Japan and a boy’s search for
honor. . . . Full of adventure, offering a vivid portrait of
Shogun- era Japan, this is a remarkable novel.”

The Ghost in the Tokaido Inn

This ebook is licensed for your
personal enjoyment only. This ebook may not be re-sold or given
away to other people. If you would like to share this book with
another person, please purchase an additional copy for each person
you share it with. We have put a low price on it because we want
anyone to be able to afford it. Thank you for respecting the hard
work of the authors.

Sample other titles by Tom
Hoobler at
http://www.smashwords.com/books/view/3337

To our daughter, Ellen

1. On the Tokaido Road

5.
Prisoners in
the Inn

6.
Looking for a
Ghost

8. A Sword for Seikei

12. An Offering to
Amaterasu

20. A Promise to the
Spirits

23. The Play Is
Finished

By one way of measuring time, it
was the year 1735. In Japan, it was known as the twenty-sixth year
of the reign of the Emperor Nakamikado. It was the age of the
samurai, the hereditary warriors whose code required one’s every
action to be guided by loyalty, courage, and honor.

Japan had known
peace for more than a century. In 1603, Ieyasu Tokugawa had
defeated the last of his rivals in battle. The emperor made
Tokugawa the
shogun
,
or military governor. His
descendants had held that title ever since, ruling from their
castle in the city of Edo.

The emperor lived in the city of
Kyoto, where he attended to more important matters. Each year he
would ask his ancestor, the sun goddess Amaterasu, to continue to
protect the land she had founded.

Between the
emperor’s city and the shogun’s city stretched what was then the
world’s busiest highway— the Tokaido Road. Thousands of travelers
set their feet on the sand-and-stone road each day. Merchants and
artisans carried silk, tea, pottery, and shiny lacquered boxes in
backpacks or on mules. Pilgrims made the journey to one of Japan’s
sacred shrines, hoping the
kami
who lived there would bestow a blessing or a
favor. Occasionally, samurai rode by on their horses. The shogun
forbade all carts and carriages on the road, so that their wheels
would not create ruts in the smooth gravel.

On this
particular day, a girl and her father stopped to rest by the side
of the road. Along came a
kago
,
a
passenger-box carried on poles by two husky men wearing loincloths.
Inside the kago was a boy about to become a man, about to step
inside his dreams. . . .

1: On
the Tokaido Road

Seikei was tired of riding. The
kago swayed back and forth endlessly, making him feel dizzy and
sick. Though the floor was lined with silk pillows, the summer heat
made the air inside the kago hot and sticky. Seikei slid open the
bamboo door and peered outside.

A girl and an older man were
sitting under a pine tree by the side of the road. The girl had
removed her sandals and was rubbing her feet. Just at that moment,
she looked up and met Seikei’s eyes. Embarrassed, he quickly drew
his head inside the kago.

Seikei wished the girl hadn’t seen
him. He felt ashamed to be carried along like some precious cargo.
He would have gladly walked. He wanted to see the countryside and
enjoy the views of the sea and mountains. But his father would not
permit that.

Seikei’s father was a tea merchant
from Osaka, the third of Japan’s major cities. He was going to Edo
to open a new branch of his prosperous firm, and he took Seikei,
his eldest son, along to learn the business. It was important to
make a good impression, Seikei’s father said. They should not enter
Edo on foot, like laborers in search of work.

Remembering this, Seikei sighed
and picked up the abacus that Father had given him. The abacus was
a wooden frame with rods that held strings of beads. Those who were
skilled in its use could rapidly calculate the prices, profits, and
inventory needed to run a business.

Seikei despised
the abacus. He would much rather have written poetry. At school, he
had won a prize for writing a
haiku
.
But
his father had not been pleased. “Writing haiku is a talent
expected of a samurai,” Father had said.

Seikei understood. He could never
be a samurai. The only way was to be a member of a samurai
family.

Even though Seikei’s father was
wealthy, owned a fine house, and traveled in a kago, he would never
be the equal of a samurai. Nor would his children or their
children. Rich or poor, they would remain merchants all their
lives. And so it was far more important for Seikei to learn to use
an abacus than to write haiku.

Seikei’s thoughts went back again
to the girl he had seen. In spite of his efforts to concentrate on
the abacus, the words of a haiku began to form inside his
head:

A girl’s feet are sore.

A merchant in a kago.

How lazy he is!

Hours later, Seikei was relieved
when he felt the kago- bearers stop. As they set their burden on
the ground, he opened the door and stepped out. It was good to
stretch his legs, but he saw immediately that the journey was not
yet over.

They had reached a checkpoint in
the road. The shogun’s officials were stopping everyone to ask what
reason they had for traveling. And the wait would be a long one,
for the road was choked with people waiting to be questioned by the
officials.

Dozens of pilgrims were making the
journey to Ise, Japan’s holiest shrine. They were led by Buddhist
priests and nuns, who tolled prayers on the strings of beads they
wore over their orange robes. Two beggars moved through the crowd,
holding their bowls out for offerings.

The large kago that held Seikei’s
father immediately attracted their attention. Seikei saw the door
slide open, and his father’s hand drop coins into the bowls. Father
believed in giving to the needy. He regularly made sacrifices at
Buddhist temples, as well as at the shrines of the older Shinto
religion. Most Japanese did the same. As Seikei’s father had told
him, “All religions may have some truth to them. We must be sure
not to offend any of the gods. Particularly since we have been
favored with wealth.”

Seikei looked at the sky. Storm
clouds had blown in from the sea, and it would soon rain. He hoped
they could pass through the checkpoint before the storm, for it
would turn the road muddy and make the journey longer.

Behind him,
Seikei heard the sound of approaching hoofbeats. As he turned, he
saw horsemen holding bright banners with the
mon
,
or
crest, of a samurai family. “Make way!” they shouted. Seikei
dropped to his knees and bowed his head. The pilgrims at the
checkpoint moved quickly to the side of the road and did the same.
It was unwise to fail to show a samurai proper
respect.

Cautiously,
Seikei raised his eyes as the hoofbeats passed. There were about
twenty horsemen. All of them wore the two swords that marked them
as samurai. But it was clear that one of them was a
daimyo
,
or lord, who commanded the others. He wore red
leather armor and a
hachimaki
,
or headband, that was decorated with his family crest: a fish
inside a red square. For some reason, Seikei’s eyes went to the
powerful right hand that the man used to hold the reins of his
horse. On two of the fingers were massive golden
rings.

Seikei only caught a glimpse of
the man’s face, but it was enough to see harsh eyes and a mouth
that was scowling cruelly at the delay. Seikei shivered.

Then, out of the comer of his eye,
Seikei saw one of the beggars straighten up and hold out his bowl.
“A great man is generous!” the beggar cried.

Seikei watched, too fascinated to
avert his gaze. He saw the samurai flick his reins slightly.
Without a break in step, his horse instantly swerved toward the
beggar. The man would be crushed beneath its hooves.

Then something extremely strange
happened. Seikei could not believe his eyes. The beggar did a
back-flip as easily as acrobats Seikei had seen in Osaka. The
samurai’s horse trampled across the spot where the beggar had knelt
only a second before.

The samurai went on, seeming not
to notice. But two of his men, following him, touched the hilts of
their swords. Seikei held his breath. He knew that if a samurai
drew his sword, he was obliged by honor to use it. Their
razor-sharp swords, made by the most honored craftsmen in Japan,
could cut a man’s head off as easily as if it were a melon. Seikei
had heard of that happening even in Osaka.

However, seeing that their master
had passed by and that the beggar posed no threat to him, the
samurai did not draw their swords. They kicked the sides of their
horses and rode on. The beggar, crouched on his haunches, gave them
a terrible look. Seikei saw his face turn into a mask of hatred,
and noticed that the man had a long scar on the right side of his
face. He was glad that the samurai did not see that look. The
beggar must be a madman!

Seikei crept into his father’s
kago and told what he had seen. Father shook his head. “All sorts
of people are found on the road,” he said. “Robbers, swindlers,
even Kirishitans.”

Kirishitans? Over a century
before, the shogun had banned the foreign religion, and executed
all the Japanese who followed it. Seikei had never seen a
Kirishitan, but rumors said that some of them still secretly
practiced their mysterious faith.

“You see,”
Father went on, “how fortunate we are to be able to travel
comfortably and safely in a kago.”