Read The Ghosts of Altona Online

The Ghosts of Altona 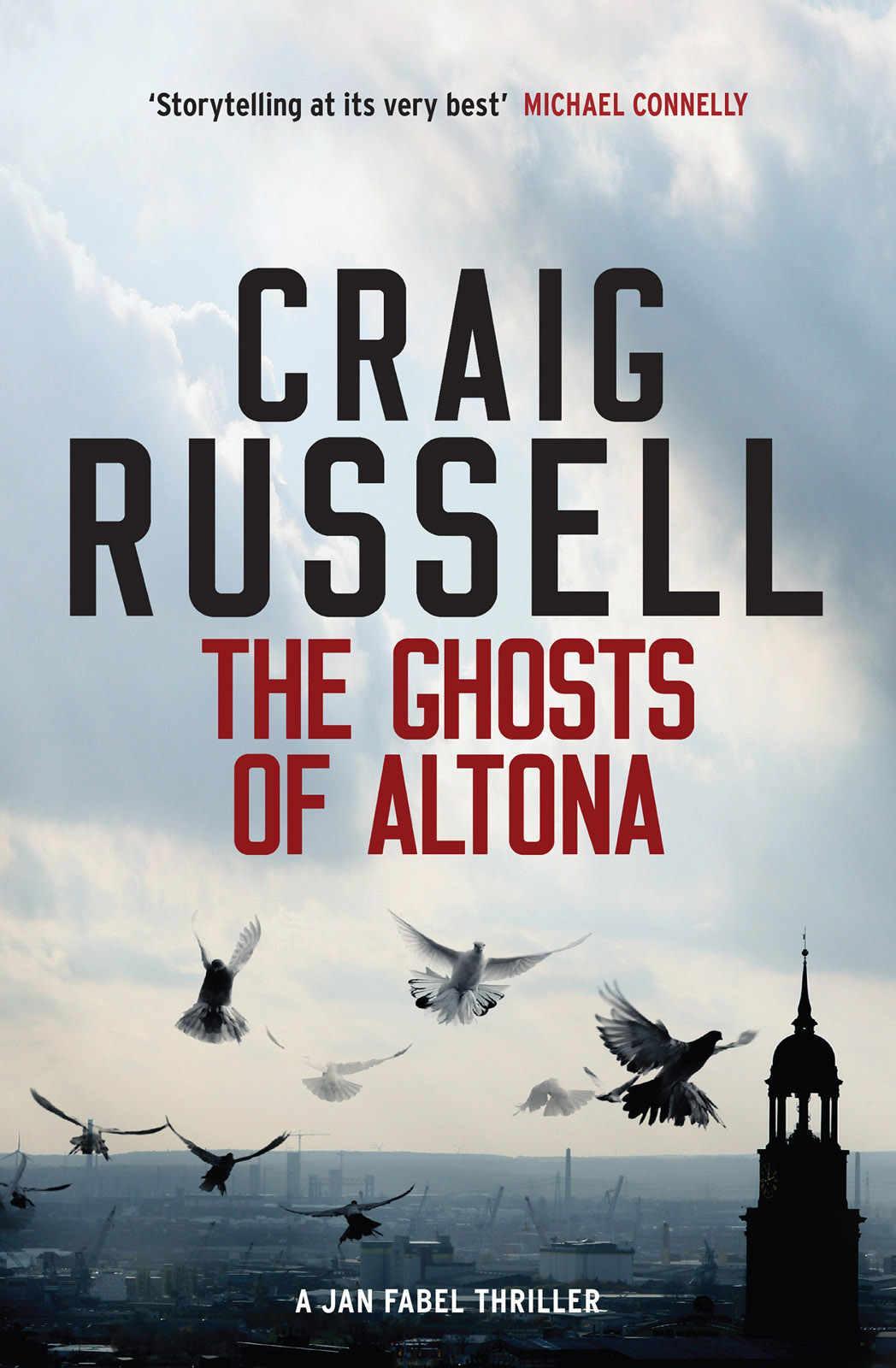 The Ghosts of Altona

First published in Great Britain in 2015 by Quercus

The moral right of Craig Russell to be identified as the author of this work has been asserted in accordance with the Copyright, Designs and Patents Act, 1988.

I am grateful to my wife Wendy for her constant support and counsel, to my agent Andrew Gordon for his enthusiasm and support for the Fabel series, and to Alice Howe, Emma Jamison and Georgina Ruffhead at David Higham Associates. Thanks also to Jane Wood, Therese Keating and Joel Richardson at Quercus. Once more, special thanks to Ulrike Sweden and the other officers of the Polizei Hamburg for their help and advice.

Craig Russell is an award-winning and highly critically acclaimed thriller writer, published in twenty-three languages around the world. He also writes non-crime fiction under the name Christopher Galt.

Winner of the CWA Dagger in the Library, he has been a finalist for the Golden Dagger, the French Prix Polar, Scottish Crime Book of the Year and the Ellis Peters Historical Dagger. Three of his Fabel novels have been made into films for German television.

A former police officer, Craig Russell is the only non-German national ever to have been awarded the Polizeistern der Polizei Hamburg (the Hamburg Police Star).

A Fear of Dark Water

How oft when men are at the point of death
Have they been merry! which their keepers call
A lightning before death.
William Shakespeare
Romeo and Juliet

No man knows till he has suffered from the night
how sweet and dear to his heart and eye the morning can be.
Bram Stoker
Dracula

The existence of near-death experiences is not disputed; their nature is. Many who experience an NDE are left with an overwhelming belief in an afterlife and lose all fear of death. Science views these experiences as powerful and convincing hallucinations triggered by the near-death release of highly potent neurochemicals and intense electrical activity in the brain.

Whatever the cause, whatever their true nature, near-death experiences leave those who undergo them profoundly changed.

Winter had been half-hearted. That day.

‘So why, exactly, are we talking to this guy more than any of the other neighbours?’ asked Anna Wolff as she and Fabel got out of the unmarked police BMW. ‘Schalthoff has no record . . . never been so much as a suspect for anything and has no dodgy connections that we can find. I just don’t get why you get a vibe from him. What is it – some kind of hunch?’

‘No such thing as hunches, Anna,’ said Fabel. ‘Just your unconscious processing information your conscious hasn’t got round to putting together. I know something about this guy . . . I just don’t know what that something is. Yet.’

They crossed Grosse Brunnenstrasse and made their way to the apartment building. Like unseen fingers turning pages, an ill-tempered breeze peeled back the damp leaves clinging to the path and tugged at the flyers stapled to bare-armed street-side trees. The face Fabel had got to know so well – big eyes and tousled blond hair above a guileless grin – smiled out from the picture on the flyers. It was that smile, the innocence behind the smile, that had motivated what seemed like the whole population of Altona to join in the hunt for the missing boy. The neighbourhood was full of the flyers: small banners of hope that little Timo Voss would be found alive and well. Everyone was looking to find Timo alive and well. But not Fabel. His job was, and always had been, to find the dead and the guilty, not the living and the innocent. Fabel knew he was looking at the face of a ghost.

‘How do you want to handle this?’ asked Anna.

‘Let’s play it by ear. I want to see if we can jangle a nerve. He was just that little bit too scripted the last time.’

As they reached the apartment building, a small woman, coat- and scarf-bundled against the weather, emerged from the main entrance and barged between them. Anna caught the door before it closed, saving them from having to press the entry buzzer.

‘It’ll be a nice surprise for him.’ She smiled.

‘Second floor,’ Fabel said and he led the way up a stairwell that smelled faintly of disinfectant. When they reached the apartment they wanted, Fabel noticed that the landing, too, seemed to have been recently cleaned. Bass echoes of pop music, drifting down from one of the floors above, haunted the stairwell.

When he pressed the doorbell it made an angry sound, like a bee trapped in a jar. Fabel waited a moment then, when no one answered, he rapped loudly on the door and called out: ‘Herr Schalthoff?’

‘Maybe he’s out,’ said Anna when there was still no answer. ‘Or working a shift.’ But Fabel waited, leaning in to the door and listening.

‘I hear movement,’ he said quietly. He was about to knock again when the door swung open to reveal a man in his late thirties. Jost Schalthoff, who Fabel knew had worked since leaving school for Hamburg City Council, was still dressed in his work overalls. He was medium height and had an open, pleasant, friendly type of face. Likeable. The kind of face you instinctively trusted.

It was you, you sick murdering fuck
.

The thought fell into Fabel’s head the instant Schalthoff opened the door.
Little Timo Voss trusted that face of yours but all he was to you was something to be used and disposed of. You took him off the street, did what you wanted and then you killed him
. And in the same instant of clarity, Fabel knew that if they searched Schalthoff’s apartment, they would find little Timo.

Fabel could not pinpoint what it had been about Schalthoff’s expression that had not been there the first time he had interviewed the council worker. Whatever it was it had instantly triggered his total certainty – something in his expression, something vague and fleeting, in that instant when Schalthoff, who had thought himself now in the clear, saw the police once more at his door. Something more than just guilt.

‘We’re following up our Timo Voss inquiry, Herr Schalthoff. We have a few more questions, if you don’t mind.’ Fabel showed his ID and smiled, keeping his tone light and matter-of-fact; Schalthoff tilted his head slightly, his expression dutifully serious. And all the time Fabel knew Schalthoff was the killer, and that Schalthoff knew he knew.

‘Of course.’ The council worker held open the door and the two Murder Commission officers entered. ‘Anything I can do to help. Terrible business . . . just terrible.’

With the door closed behind them, the music from the apartment above was muted to a vague bassline beat. Schalthoff led the two police officers along a short hall to the living room. Fabel scanned as he walked: three doors. Two doors open: small bathroom and toilet, boxroom-cum-bedroom. One door closed, presumably the main bedroom. As he passed the bathroom, Fabel thought he picked up a hint of the same disinfectant odour he had smelled in the stairwell and on the landing.

The living room was clean and tidy and extended into an open-plan kitchen. A picture caught Fabel’s eye; it hung on the wall of the hall, just where it opened out into the living area. It was an expensive-looking print of an oil painting, mainly in blacks, dark blues and reds that seemed to combine the abstract with the representational. A hooded and cloaked figure of indeterminate gender stood on the shores of a river. Behind the figure, a riot of shapes and colours suggested some fierce conflagration consuming a city; in the foreground, the figure and the blaze behind it were reflected in the dark, glittering water. The painting had been signed:
Charon
.

The picture looked a little out of place in the apartment – all the furniture was modern and tasteful without being expensive: a well-filled bookcase beneath the window; coffee table; couch and two armchairs. All clean lines. The kitchen counters were uncluttered and populated only by a kettle, toaster and counter-top microwave. Everything functional. Everything in its place. With the exception of the dark print hanging in the hall, Schalthoff’s apartment spoke of someone controlled; someone who sought reassurance in efficiency and order. Someone not given to untidiness. To chaos.