Read The Girl in the Hard Hat Online

The Girl in the Hard Hat 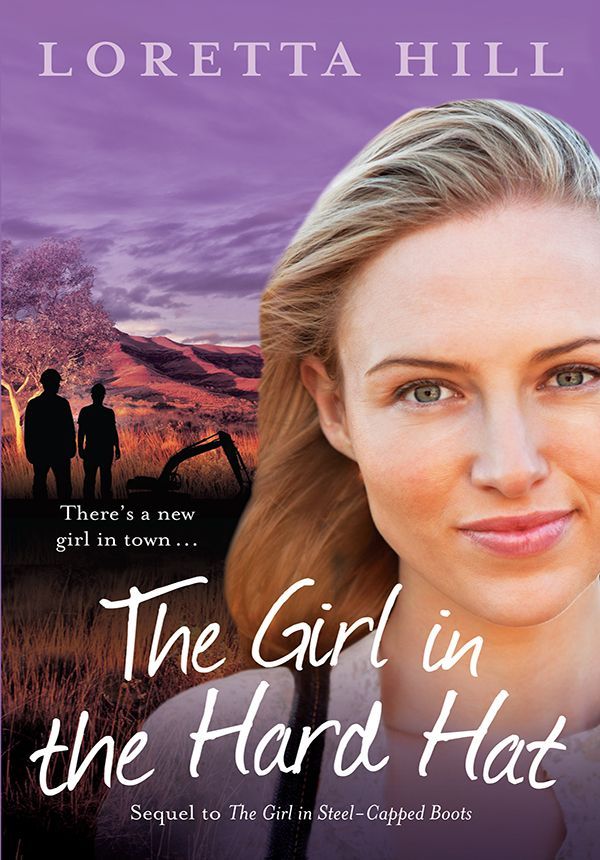 To tame a bad boy you will need :

a. One hard hat

Wendy Hopkins has come to the Pilbara to search for the father who abandoned her at birth. So getting mixed up in construction site politics is not high on her ‘to do’ list. But when she takes a job as the new Safety Manager at the iron ore wharf just out of town, she quickly becomes the most hated person in the area. Nicknamed ‘The Sergeant’, she is the butt of every joke and the prime target of notorious womaniser Gavin Jones.

Giving up is
not
an option, though. For, as it turns out, only Wendy can save these workers from the coming storm, find a man who wants to stay buried . . . and put a bad boy
firmly
in his place.

Extract for
One Little White Lie

For my darling husband, Todd.

Ever since we got married we’ve done everything as a team.

I couldn’t have got through the last few months without your faith, enthusiasm and support.

Love you for always, Loretta

The majority of this story is set at Cape Lambert Port Facilities, the home of one of the tallest, longest and deepest jetties or open-sea wharves in the world. It is owned by Rio Tinto and is operated by Pilbara Iron. The nearby town of Wickham was built specifically for the purpose of supporting the wharf and other functions of the port, such as train-dumping, primary and secondary crushing and screening, stockpiling and blending of iron ore.

This ore wharf, which is approximately three kilometres long and thirty metres tall, has two cranes or ship-loaders that are able to load three ships at the same time. The wharf currently exports fifty-five to fifty-seven million tonnes of iron ore every year to steel mills in Japan, China, Korea, Taiwan and Europe.

My heroine takes on a role as safety manager for a construction team who are there to lengthen and widen this wharf, which was originally completed in 1972. Over the course of its existence the Cape Lambert wharf has undergone many upgrades of this nature to increase its life and capacity. I was lucky in my career as an engineer to witness and participate in one of these upgrades in 2001, which forms the basis of the background of this story.

It is important I highlight the time frame of the project in this story because in terms of safety standards in this industry, a decade is rather significant. Although the dangers still exist, regulations have become much tighter and company cultures much more accepting of them. Policies and procedures have improved not only for safety in the workplace but also for the standard of living in the camps. The attitudes of the workers in the fictional company Barnes Inc, depicted in my story, would be rare these days.

Also, to reduce the number of characters and engineering jargon in this story, I have condensed certain roles of some of the characters: for example, Carl is the project manager, but in my novel he also performs the duties of a construction manager. In real life, his job would have been done by two people. I have also ignored a lot of the other functions of the port and the shipping schedule, which would definitely have interfered with the project. It has been my aim to show the culture and flavour of the people in this environment, rather than absolute technical accuracy. Nonetheless, it is important to note that all characters and companies shown here are entirely fictional. Any resemblances to any real persons or entities are purely coincidental.

I adore the Pilbara and the people who work and live upon its majestic beauty. But the Pilbara can take as much as she can give. Cyclone James, the storm depicted in this novel, is fictional and was researched by looking at other cyclones which occurred on the Pilbara, in particular Cyclone Vance in 1999. Incidentally, I named my fictional cyclone after my second son, James. This is actually how real cyclones are named. If you would like a cyclone named after your child, you can actually add their name (free of charge) to a list managed by the Bureau of Meteorology.

This book is all about the hazards associated with working the land – not only those of humanity’s own making, but also the results of Mother Nature’s wrath. I wanted to show the challenges and dangers men and women face on jobs like this. The lifeblood of Australia has always been humour in the face of hardship. I hope this is one theme readers take away from my work.

Wendy knew something was wrong the moment she stepped into TCN’s open-plan office. Perhaps it was the frosty looks she got from the staff as they peered at her over their short cubicle walls. Or the fact that the receptionist wouldn’t let her step beyond the hat hooks by the front door, but directed her instead to a room set apart from the main office space.

‘You’ll have to sit in the meeting room until Mr Hullog is ready to deal with you.’

The woman made it sound like she was a toddler with a dirty nappy. This was supposed to be her first day of work. She had dressed carefully in the TCN uniform that Dan Hullog had given her just the day before. Her shirt was ironed, her khaki pants neat. Her blonde hair was tied modestly at the nape of her neck with black elastic.

So if it wasn’t her appearance that offended them then what had happened between yesterday and today that she didn’t know about?

She walked into the meeting room. It was furnished in the usual sparse style of a construction site donga office. A white trestle table and eight plastic chairs filled the space. The vinyl floor was marked red with boot prints and the white board on one wall held a list of milestone dates. The chairs were uncomfortable to say the least and after twenty minutes of sitting in one she had to get up and walk around to stave off a numb bum.

She looked out the window, anticipation momentarily overcoming her concern.

The Cape Lambert iron-ore wharf stretched out before her – a majestic masterpiece almost like a painting framed by the dingy donga office window. Standing nearly five storeys above the water, the jetty stretched out more than three kilometres across the sea. The end of it was imperceptible as it faded into the horizon. Every day, ships from around the world docked there, picking up tonnes and tonnes of the precious red dirt that fuelled Australia’s economy.

A shiver of both excitement and trepidation flitted through her body.

I can’t believe I’m going to be a part of something like this . . . again.

She heard the snap of a door closing and spun around.

A tall, dark-haired man with the most intense blue eyes she’d ever seen advanced into the room.

‘I’m sorry to have kept you waiting, Wendy.’

‘Call me Dan.’ He indicated the chair she had been sitting in before and took the one opposite it. He laced his hands together on the white chipboard, transforming their encounter from backyard picnic to boardroom meeting. ‘I have to ask. Do you know how you got this job?’

Her eyes narrowed. ‘My uncle said you owed him a favour.’

Red-hot heat worked its way up from the base of her neck. She knew she shouldn’t have trusted Uncle Mike. She barely knew him and he seemed as inclined to want to get rid of her as to help her. But she had been at her wits’ end. Out of money and out of luck. When she’d stumbled across him in Karratha, she had thought it was the hand of providence not the bite of corruption.

What had her mother told her?
Oh yeah: ‘Nobody does anything for nothing.’

She swallowed hard before casting an apology at the man before her. ‘I had no idea. Honestly. I hadn’t seen Uncle Mike in years. I should have checked his motives more closely.’

You should have listened to your conscience.

She had known Mike was the black sheep of the family. No one talked about him unless they absolutely had to and even then their comments were never complimentary. Still she wasn’t exactly number one with the family at the moment either. When she’d run into Uncle Mike unexpectedly, it had almost been like meeting a kindred spirit.

How wrong you were.

She waited on Dan’s response with breath held.

‘I had a feeling from our conversation yesterday that you had no idea what the full story was. The truth is,’ he sighed, ‘there is no real position for you here. I have a safety officer already and he does a very good job.’

Her heart sank. He wasn’t going to take her on. He had been her last hope at a job in the area.

‘Also,’ he lifted an unsmiling face, ‘I no longer care what your uncle says or doesn’t say. The person I was protecting . . .’ He changed tack. ‘Let’s just say, his so-called silence is no longer of any value to me.’

Pride stiffened her back, causing her to stand. ‘Well, I’ll just get out of your hair then, shall I? There’s no need to drag this conversation out.’

‘Wendy, whatever beef I have with your uncle is nothing to do with you or your ability. And I’m mortified that you have been used as a pawn in a very tasteless game.’

But Dan was still talking. ‘I want to honour the agreement, not for his sake but for yours.’

She paused in the act of turning away. ‘But you said there was no job.’