Read The Girl Next Door Online

The Girl Next Door 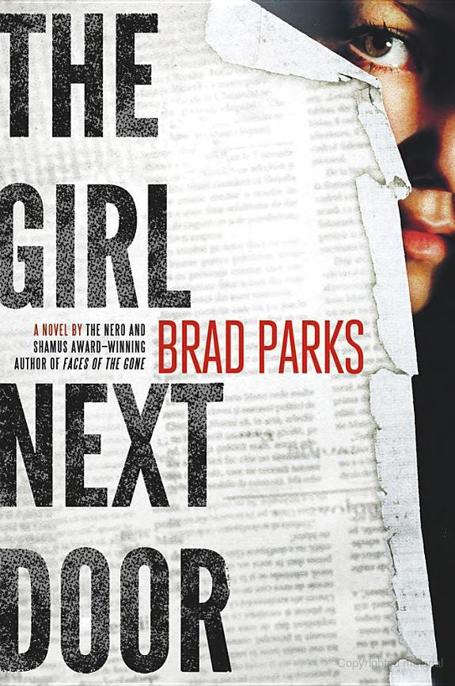 This is a work of fiction.
All of the characters, organizations and events portrayed in this novel are either products of the author’s imagination or are used fictitiously.

The girl next door: a mystery / Brad Parks.—1st ed.

To the smart, strong, wonderful boy who makes his father want to be a better man every single day. This is for you, pal.

For three mornings, he merely observed. With a clipboard on his lap and an eye on his car’s clock, he tracked her from house to house, logging every movement.

And so, on the fourth morning, a Friday, he struck. He decided his best opportunity, there among the tightly packed postwar suburban houses of Bloomfield, New Jersey, was on Ridge Avenue, which seemed to have been expressly designed for a hit and run. It was long and straight and slightly downhill, which would make for easy acceleration. It was narrow and packed with parked cars, which would allow her little room to dodge him. And it was close to the Garden State Parkway, which would provide him ample opportunity to escape.

He had studied his notes the night before, memorizing the order and spacing of her stops. There were twelve houses on Ridge Avenue that subscribed to the
Newark Eagle-Examiner
. On the three previous mornings, she had reached the first one at 5:25, 5:24, and 5:27, respectively.

So he was ready for her at 5:26 when she rounded the corner of Ridge Avenue and started working her way down the block. The sun had not yet pushed over the horizon, but there was enough dawn that he could make out her car and the small smudge of her body as she scampered toward each front porch, dutifully delivering that day’s edition. It was just the right amount of light—too bright for the streetlights to illuminate much, too gloomy to make out a license plate—in which to commit the perfect crime.

He felt the smoothness of the steering wheel on his Cadillac Escalade, sliding his wedding ring on the wrapped leather. When she reached the midpoint of the block, he twisted the ignition key. The engine quietly came alive and the dashboard lit up. The car pinged at him to fasten his seat belt, which he did. He pivoted his right foot a few times, stretching and flexing his calf like a sprinter about to settle into the starting block, and placed it on the brake pedal. Then he shifted his transmission to Drive. Timing was everything. For as many mental rehearsals as he had staged, he knew real life would give him only one chance.

He peered once more into the murkiness of daybreak. When he saw the brief flash of white in her brake lights—signifying she had put her car into Park—he pressed down on his accelerator, gently but firmly. His eyes briefly tracked the speedometer as it leaped from twenty-five to forty to fifty. Then he turned his attention toward his target.

She had just stepped out of her car, grasping a rolled-up newspaper in her right hand and closing the door behind her. She was too preoccupied to pay attention to the SUV hurtling toward her. Up until a quarter second before impact, he was just another car going a little too fast down a residential street in too crowded New Jersey—hardly unusual in a part of the country where everyone was always in a hurry.

She didn’t notice him until his grille plate was practically on top of her sternum. He was going at least seventy by that point. She had no chance to get out of the way.

That’s when she rewarded him with the look that briefly flashed in his headlights—total shock mixed with complete misunderstanding mixed with utter horror. In the nanoseconds that stretched out before he made contact, his only wish was that she could know this was no accident, that he was the driver, and that she was getting what she deserved.
Tussle with me, will you, bitch?
he wanted to scream as his bumper crushed into her side.

He heard the impact, a solid chunk, but didn’t really feel it. There was nothing to feel. The force of his car—all that mass times all that velocity—was so much greater than her hundred ten pounds of squishy humanity. Her body flew forward, directly into the path of the still-accelerating SUV. He did not even tap the brake pedal as he drove over her, his suspension absorbing the jolt as if she had been nothing more than a worn speed bump.

When he reached the end of the block, he allowed himself one glance in the rearview mirror, where he could see her crumpled form in the middle of the street. Then he concentrated on his getaway.

The number one mistake most hit-and-run drivers make is jamming on the brakes—the squealing alerts would-be eyewitnesses. The second mistake is continuing to drive like maniacs after leaving the scene.

He was not going to commit either blunder. He gradually slowed to a reasonable speed, following all posted signs as he put distance between himself and that bloody, lifeless heap. Eventually, he slid onto the Garden State Parkway, joining that unending stream of fast-moving traffic and reveling in its well-traveled anonymity.

To anyone who says newspapers only print bad news, I say: read the obituaries.

For the most part, obits are the uplifting stories of people who led long and full lives, enriched communities with their accomplishments, died at peace with the world, and left behind many loving relatives. And sure, the subjects of these articles have to be more than just slightly dead in order to appear in our pages—that part is, admittedly, a bit of a buzz-kill. But otherwise, obits are some of the happiest news we print.

My paper, the
Newark Eagle-Examiner
—New Jersey’s largest and most respected news-gathering and content-producing agency—organizes its obits alphabetically, last name first, followed by the deceased’s town and age. And I defy anyone, even the most jaded cynic, to read one day’s worth of obits without feeling at least a little bit better about the state of the world.

Sometimes all you have to do is read one letter’s worth—like, say, the
M’
s. You start with a guy like Milazzo, Vincent, of Elizabeth, 92, the high school football star who served his country in World War II, then worked his way up to foreman at a lawnmower parts manufacturer before enjoying a long retirement. You work your way to Monastyrly, Jane C., of Wharton, 81, the beloved mother of four, grandmother of ten, and great-grandmother of eight, who was an avid gardener and won the Wharton Elks Club pie-baking contest five times. Then you finish with Muster, Edward L., of Maplewood, 77, the son of South Carolina sharecroppers who earned scholarships to college and law school, set up his own practice, and became the first black treasurer of the Essex County Bar Association.

All the wrinkles of their days on this planet have been smoothed away and turned into one seamless narrative. All their trials and struggles have taken on the aura of parable. All their successes have been magnified, while their failures have been forgotten.

And by the time they “passed on”—or “made their transition,” or “entered into eternal rest,” or any of those other wonderful euphemisms for the Long Dirt Nap—they seemed to have achieved some kind of understanding of why they walked this planet in the first place.

Or at least that’s how I like to imagine it.

There’s also something about obits that, as an unrepentant newspaperman, I find comforting. Over the past dozen years or so, my business has ceded its dominance in any number of areas—classified advertising, national and international news, sports scores, and so on—to the Internet. But we still have a monopoly on obits. So while you can go anywhere to find out if the Yankees won, you have to come to us to learn if your neighbor is still breathing. It makes the obit pages a throwback to a better day for newspapers, one part of a crumbling industry that has somehow held strong. For me, it’s just one more reason to love them.

Some folks, especially the older ones, scan the obits each day to see if anyone they know has died. Me? I’m only thirty-two. So hopefully it will be a good fifty years or so until anyone has to read about Ross, Carter, of Bloomfield. And it will probably be forty years until my high school classmates start popping up with any regularity.

In the meantime, I read them strictly for the inspiration.

So there I was one Monday morning in July, sitting at my desk against the far wall of the
Eagle-Examiner
newsroom in Newark, getting my daily dose of good news—once again, from the
M’
s—when my eyes began scanning the entry for Marino, Nancy B., of Bloomfield, 42.

Nancy B. Marino, 42, of Bloomfield died suddenly on Friday, July 8.

Born in Newark, Nancy was raised in Belleville and graduated from Belleville High School. She was a popular midday waitress at the State Street Grill in Bloomfield. Nancy also had one of the largest delivery routes in the
Newark Eagle-Examiner
circulation area and was proud to serve as a shop steward in the International Federation of Information Workers, Local 117.

She is survived by her mother, Mrs. Anthony J. Marino of Belleville; two older sisters, Anne Marino McCaffrey of Maplewood and Jeanne Nygard of Berkeley, Calif.; and many other friends and relatives.

Visitation will be held today from 1
P.M.
to 3
P.M.
and from 7
P.M.
to 9
P.M.
at the Johnson-Eberle Funeral Home, 332 State Street, Bloomfield. A Funeral Mass will be offered Thursday at 10
A.M.
at St. Peter RC Church, Belleville. Interment will be at St. Peter Parish Cemetery following the service.

Even though we were employed by the same newspaper, I didn’t know Nancy Marino. The
Eagle-Examiner
has hundreds of carriers, all of whom work at a time of day when I try to keep my eyelids shuttered.

But I have enormous respect for the work she and her colleagues do. The fact is, I could spend months uncovering the most dastardly wrongdoing and then write the most brilliant story possible, but we still rely on the yeoman paper carrier to get it to the bulk of our readers. That’s right: even in this supposedly all-digital era, our circulation numbers tell us the majority of our daily readers still digest their
Eagle-Examiner
in analog form.

So every morning when I stumble to my door and grab that day’s edition—always one of life’s small pleasures, especially when it contains one of those stories I busted a spleen to get—I receive a little reminder that someone else at the paper, someone like Nancy Marino, takes her job just as seriously as I do.

I leaned back in my chair and considered what I had just read. In obit parlance, “died suddenly” was usually code for “heart attack.” But that didn’t seem to fit. A just barely middle-aged woman who delivered newspapers and waited tables was probably in fairly good shape. Something had taken Nancy Marino before her time, and the nosy reporter in me was curious as to what.

By the time I was done reading her obit a second time, I had concluded that the newspaper she had once faithfully delivered ought to do something more to memorialize her passing. Most of our obits are relatively short items, written by funeral home directors who are following an established formula. But each day, our newspaper picks one person and expounds on their living and dying in a full-length article. Sometimes it’s a distinguished citizen. Sometimes it’s a person who achieved local fame at some point, for reasons good or ill.