Read The Girl Who Slept with God: A Novel Online

The Girl Who Slept with God: A Novel 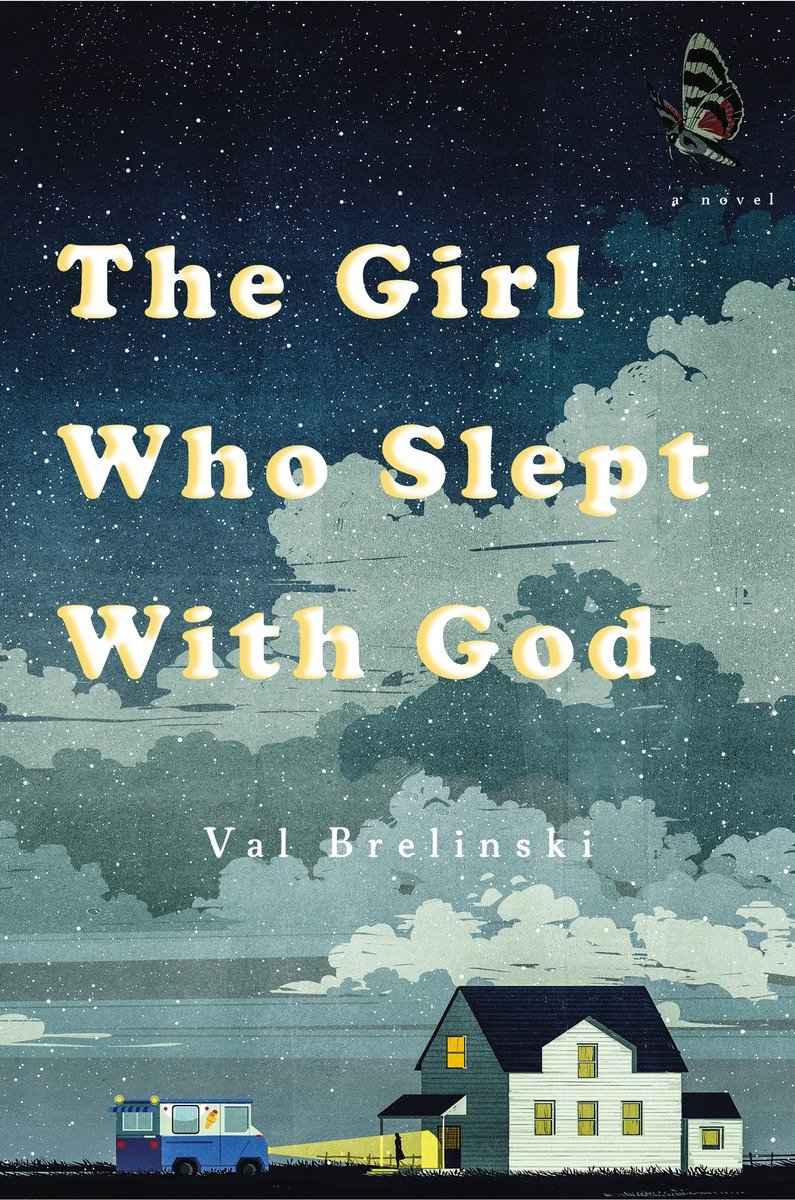 Part One: The House on Ninth Avenue

To my mother and father

To fall in love is to create a religion that has a fallible God.

O
n the last day of August in 1970, and a month shy of her fourteenth birthday, Jory’s father drove his two daughters out to an abandoned house and left them there.

The trip had not taken long. Her father piloted the car with resolute determination toward the very edge of town. He drove past the railroad tracks and the fish hatchery and the rodeo grounds, past the sugar beet factory and the slaughterhouse and the meatpacking plant; all the while Jory stared out the window in a silent fury. Next to her in the Buick’s backseat, Grace was practically unconscious. She lay slumped over with her head resting accidentally on Jory’s shoulder, her drool dampening the upper portion of Jory’s T-shirt. Jory gave her sister a shove and then turned toward the window. Black Cat Lane and Chicken Dinner Road and Floating Feather rolled past—long, twisty lanes sided with fields of sugar beets and alfalfa and corn. Jory watched a lone mallard drop and skid like a bomber onto an irrigation ditch while three goats perched king of the hill–style on a salvaged roof a farmer had put out for them. Her father continued on past several vast silagey-smelling feedlots, and then the fields grew even larger and the scenery more sparse and the houses less frequent, and finally he turned down a narrow unpaved lane that Jory had never seen before. Then he stopped the car and opened the door. Jory refused to look up at the strange house where she and her sister were now to live. She sat in the backseat with her hands between her knees until her father pulled her forcibly out of the car and set her on her feet in the dirt.

The house of their exile was ancient and dilapidated, its white siding weather warped, its roof’s shingles curling and covered with moss. And
below the sharp peak of the house’s second story, an enormous diamond-shaped window stared out from its gable like the jack of diamond’s lonely eye. But it wasn’t the condition of the house that mattered, Jory knew, as much as its location. The house was safely hidden away on a back acre of Idaho farmland, far from any schools or churches or stores or neighborhoods. And it was this isolation for which Jory’s father had paid. Privacy was of the utmost importance now, he had said. Or perhaps more correctly, the word he was looking for was
secrecy
.

Her father unwedged the few taped-together boxes from the Buick’s trunk. One at a time, he carried them up the house’s peeling green steps and deposited them onto the living room floor. Jory stood holding the screen door open and taking occasional, unwilling peeks at the dim interior of the house. A brown couch sagged dead-cat-like against one wall. The portion of the floor she could see from the doorway was made of sloping hardwood, and was partly covered by a gray flowered rug that must have been bride-beautiful at some point a very long time ago. Jory heard the car door slam. After a second, her sister came wandering up the porch steps. Grace leaned against the door frame for a moment and then wobbled toward the couch, where she proceeded to lie down on her side, her face buried against one of the sofa’s armrests.

“I think that about does it.” Her father wiped his hands down the front of his khaki pants. “Yup,” he said, gazing about the room. “There you are.”

Jory gave him a hard, bright look. “Here we are.”

He searched for something in his pockets. He whistled “Red River Valley” and patted down his shirtfront, and then his pants pockets. “Ah!” He held up a small silver key. “You’ll be needing this.” He smiled and handed it to her.

Without looking at the key, Jory tossed it onto the top of one of the unopened boxes.

“Hey, now,” her father said in his calmest voice. “You don’t want to lose that.” After walking over to the cardboard box and retrieving the key, he handed it to her once more, this time pressing it into her palm and closing her fingers firmly around it.

“Don’t you have another one?” She inspected his face.

“Well, Mom and I will keep an extra, of course.” He shrugged. “Just in case.”

“Yes, and don’t forget, there’s milk and things that need to go in the fridge. Also, the front door may stick a little when you first try to open it, so you’ll have to shove hard and jiggle the handle up and down.” He demonstrated and then paused, waiting for a look of recognition that Jory refused to give. “Okay, well, I’ll be back to check on you in a day or two. I think Grace’s correspondence course books should be here by then, so I’ll bring them along.” He studied the ceiling the way he always did when he needed hope or inspiration. “You might want to get Grace into bed. The doctor gave her a little something to calm her down. A shot or a pill or something.”

“You know,” he said, ignoring her tone and marching on, “you’ve got just about everything here.” He cast a proprietary glance around the room. “I think you girls are all set. Really. I think that about does it.”

She stood and stared at him. His smile seemed sewn in place.

He stepped toward her and then pulled her head tight against his chest. For a moment she listened to his huge heart’s muffled thumping. Then she could feel him sigh. He stepped back and put his hands on either side of her face. Bending down, he pressed his lips against a spot in the middle of her forehead. “JoryAnne,” he whispered, and then touched the spot firmly with the tip of his finger, as if sealing the kiss into place.

She had a sudden impulse to slap him.

Jory sat on one of the boxes with her back to the door, and as her father pulled the Buick out onto the roadway she could smell the dust that drifted up in the wake of his leaving. For a moment she remained like this, and then with a start she jumped up and scrambled toward the house’s stairway, leaping up the steps to the second-floor landing and its diamond-shaped window. Breathless, she hung on to the window’s angled frame and peered out. The glass was slightly wavy and thick, but she could see everything below: the sway of a giant willow, the branches of a
plum tree set to shaking by old men crows already drunk on its rotting fruit, the steady trajectory of her father’s green Buick disappearing down the graveled country road. She watched, unmoving, until the last of the car’s comet tail of dust evaporated into the late afternoon air. Then she sank down onto her knees on the hardwood floor. This high perch made her feel removed and above, as far away as banished maidens locked in smoothed-stone towers. Forever gazing down, they waited for nothing, for knights who were already dead and wouldn’t be coming.

That first night she refused to sleep in either of the two iron-framed beds. She didn’t unpack any of the boxes either. As it grew dark, she covered Grace with a red plaid blanket and then moved out onto the back porch and sat on its wooden floor with a wedding quilt she’d found on one of the beds wrapped around her.
I John 4:7—Beloved, let us love one another,
the quilt admonished in embroidered script, courtesy of Laveeta Lamar Hicks.
John 15:13—Greater love hath no man,
proclaimed Eleanor Genevieve Doerksen.
Let love be your greatest aim . . . For God so loved the world . . . Love never fails.

“Fuck you. And you. And you.” Jory twisted the quilt around to its other side. Here there were no Bible sayings, only endless twining circles—wedding rings stitched carefully in pink and gold thread. She ran her hand over the puckered material. How many days and nights did it take to sew something like this? And did each woman do her own portion separately, or did they gather over a long sewing table in someone’s living room and talk as they worked? And why did they do it anyway? Look where it had ended up. They were all dead, the quiltmakers and the bride, and their painstakingly stitched words meant nothing . . . nothing.

She pulled the quilt tighter around her shoulders. Something about the way she was sitting, hunched and small, reminded her of how once when she was little, to spite her mother, she had hidden beneath a table in the back corner of the public library. She had watched from behind the table’s great carved wooden leg as her mother stood in line, checked out her books, and then calmly set off for the drugstore with Jory’s two sisters in tow. Jory had come out from her hiding place then, smacking her head hard on the table edge in her hurry, just in time to see the three of them
walking past the glass doors of the library and on down the sidewalk, her little sister occasionally stooping to scratch at something on her knee.

Jory was quite sure that she had forgotten that incident completely. She glared up at the sky and the points of the stars blurred together. She cried then, a few big, splintered sobs, and pounded at the porch’s floorboards with her bare heels over and over until finally, wondrously, it hurt enough to stop. She rocked back and forth hugging her knees, holding her bruised feet carefully off the floor while her chest seized, her lungs catching at frayed threads of air. She wiped her nose on a corner of the quilt, and then held still listening. The night air hummed with the same happy insects. A farm or two away a dog barked, and then barked again. She was still here. Nothing had changed. What had she expected? She tipped slowly over onto her side, clutching the quilt, and let her face slide against the cool of the painted wood porch.
God is love,
she thought.
For God so loved the world.