Read The Girl with the Wrong Name Online

The Girl with the Wrong Name 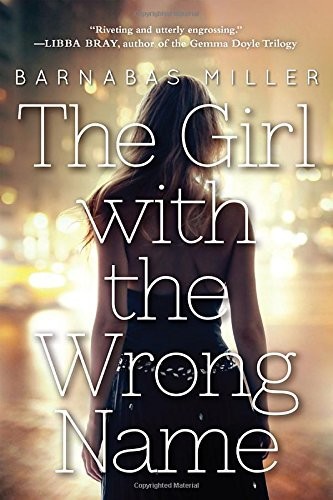 This is a work of fiction. Names, characters, places, and incidents either are the product of the author’s imagination or are used fictitiously, and any resemblance to actual persons, living or dead, businesses, companies, events or locales is entirely coincidental.

Words and Music by Alton Alexander and Lawrence E. Alexander

Words and Music by Alton Alexander and Lawrence E. Alexander

Permission granted for limited use by Jane M. Huyck, 2015.

Published in the United States by Soho Teen

The girl with the wrong name / Barnabas Miller.

(Putting the Wedding Project on hold)

STRANGER AT THE WINDOW

THE BOY AT THE WINDOW

Jesus, Theo, you are in serious need of sleep. Just stick with “The Lost Boy” for now—at least you’ve finally given him a name. And the title’s not important; you know that. The only important thing is that you stay still and quiet and calm. You’re an impartial documentarian—a neutral observer trying to make sense of your new subject. A decent cinematographer should at least be able to KEEP HER SUBJECT IN FRAME.

AND STOP YELLING AT YOURSELF IN ALL CAPS.

It’s the third time I’ve seen the Lost Boy at the Harbor Café. My hidden button cam is sewn into my jacket collar, tracking his every move. I wonder if he knows that the freakish girl in the corner secretly films him, scrutinizing his image on her iPhone under the table, fighting to figure out what he has lost. Why does he come here every day at exactly 11:45? And how could anyone be so shamelessly beautiful but so palpably sad?

When I first saw him on Sunday, I was transfixed. Then he saw me. So I was embarrassed for the next twenty minutes—the kind of shame that makes your face glow bright red. I swear I could actually feel my scar burning. I had to turn down to the tabletop when I pictured that morning’s
New York Times
’s
“Weddings and Celebrations” section, page ST15:

Emma J. Renaux, 30, daughter of James and Sally Renaux of Charleston, S.C., will marry Lester A. Wyatt, 30, son of George and Leona Wyatt of Dallas, Tex., on Sunday. The couple officially met as 15-year-old sophomores at New Hampshire’s Phillips Exeter Academy, but unknown to Mr. Wyatt, they had in fact met a year earlier.

“We’d shared one dance to R. Kelly’s ‘I Believe I Can Fly’ at the freshman Winter Formal,” Ms. Renaux confessed sheepishly, “but my hair was so different that he didn’t recognize me. It took me 10 years to admit that I’d watched him across a crowded room for hours before we ever spoke. I knew before I’d even asked him to dance. I knew I was going to marry him.”

Yes, I have a near-photographic memory when it comes to
New York Times
wedding announcements. And no, I have no explanation or defense for it. I only know that each and every blurb tends to prove some inevitable fact of life, and my inevitable fact is this: When a beautiful girl watches a beautiful boy across a crowded room, it’s a delightful anecdote in the Sunday
Times
. It’s an enchanting scene of timeless romance from an Italian foreign language Oscar nominee.

When an ugly girl watches a beautiful boy across a crowded room, it’s a disturbing German indie on the Sundance channel about a budding young female serial killer.

To be clear, I am not
a budding young female serial killer. I’ve just looked like one ever since June seventeenth, The Night in Question. Or, more specifically, since the early morning of June eighteenth, when I woke up feeling bruised and battered on every inch of my body. When I limped my way to the bathroom and found a four-inch gash running down the side of my jaw.

Now I can feel every woman in the café watching me watching him. I can hear them thinking:
Oh, that poor little teenage demi-troll, all dressed in black. She doesn’t know that she’s a hideous creature with toilet-paper skin and an involuntary perma-frown. She somehow doesn’t see that he is a Glorious Golden God-Prince whose babies will grow up to be congressmen and Fox News anchorwomen and teenage country music divas.

Well, to them I say, Lower Manhattan Yoga Elites, I know.
I know I’m deformed. I know my attempts to hide it are futile—that a ton of concealer and Olay Regénerise under a pile of peekaboo black hair only draws more attention to what I’m hiding. What I
don’t
know, you gawking little scone-eaters, is what happened to me on the night of the seventeenth. A horrific accident? A violent assault? Or maybe the boogeyman in my closet just finally lost his cool after years of menacing me silently from behind the laundry hamper?

All I can remember is going to sleep that night in the safety of my own bed. Apparently, the “trauma was so acute” that I’ve “repressed the entire blah blah blah . . .”

Dr. Silver keeps encouraging me to talk about it.

Too bad for him; the damage is already done. It was done long before The Night in Question. It was done on the day I was born, the day my parents made the inexplicable decision to name their one and only daughter Theodore.

I’ve imagined the post-birth conversation so many times:

“
Congratulations, Mrs. Lane, it’s a girl! What are you going to name her?”

“Well, we’d like her to grow up as socially maladjusted as possible. We’d like little boys to look at her disdainfully and say, ‘You’ve got a boy’s name’ from the nursery all the way through sixth grade. That way she can get a solid jump-start on her existential alienation.”

But Mom and Dad and Dr. Silver and everyone else have made a crucial mistake. They’ve all failed to understand: I am not Theodore. I am another lighter, airier, prettier girl. I have another lighter, airier, prettier name like Rachel or Hope or Samantha. They are just too blind to see it. “
Theodore will be your name,”
I can hear my cold-blooded mother cooing at the baby version of me.
“And if all goes according to plan, you’ll be spending your entire seventeenth summer huddled in the corner of your bedroom, shutting out the world with a pair of scuffed-up Beats headphones, blasting the Beatles’ ‘Revolution 9’ on repeat until your ears begin to chafe and not-so-metaphorically bleed. ‘Number nine
. . .
number nine
. . .
number nine
. . .
number—’”

My thoughts tend to attack without warning now. They riddle my head like machine-gun fire and zoom off in a trail of smoke before I can make sense of them. That’s why I try to capture as much as I can on video, so I can actually experience my life at some later date when my mind has stopped racing and snacks are more readily available.

I crane my neck so my button cam can keep him in frame. (My documentarian trick: I run the cable through an incision in my jacket pocket so I can monitor all the shots on my phone.) He drifts past my table. I glance up and catch a glimpse of the blond flecks in his brown stubble and the light sprinkle of freckles on his ski-slope nose. Speed Stick deodorant is slipping out from the mesh side pocket of his overstuffed backpack. There are tiny rips and tears at the bottom of his worn-out white V-neck T-shirt.

I know those jagged little holes are telling me a story, but the only one I can think of is the story of what his chest looks like underneath that shirt.

This has nothing to do with sex!
I want to yell at the tittering scone-eaters.
Vulgar Walmart romance is not my motivation, and if you people knew anything about me, you would know that.

But for the split second that he and I are in the same orbit, I’m a lit cigarette, and I don’t even smoke. The feeling is so intense, I can’t even tell if it’s a good sensation or a bad one. I’ve heard about the fine line between pleasure and pain, but this is the first time I have the slightest clue what it means.

Then he’s past me, and it fades.

I take a few deep breaths and swipe my clammy palms across my jeans, swiveling in my seat to get him back on camera. I need to stay perfectly still. He grabs the last wrinkled copy of the
Times
and settles into his seat at the marble table closest to the door. Of course he chooses the
Times—
it’s just one of the twenty-three things we have in common.

Thing Number Nine: he has
to be an obsessive like me, because he has repeated this noontime routine with near-clinical precision every single day since Sunday.

It always starts on the café’s front lawn. He shows up at the window and plants his black Chuck Taylors firmly in the manicured grass. There he stands, the Hudson River stretching out behind him. He looks out across the water at the Statue of Liberty. Then he turns to Ellis Island. It’s like he’s triangulating himself with those two monuments, orienting himself in a specific geographical position on the earth’s grid, but I have no idea why. This is
killing
me.

Once he comes inside, he never orders anything. He just grabs the
Times
, drops down at his table, and begins what I call his “forlorn gazing.” Every time the door swings open, his head darts up. He scans each new patron like an abandoned puppy tied to a hydrant, hopelessly spot-checking every pair of shoes and eyes for signs of his master.

Who are you looking for, Lost Boy?

I need to know. Did you miss your rendezvous with the mother ship? Are you part of some nomadic species of J.Crew model, wandering helplessly through Battery Park City in search of your Nantucket beach house? Or maybe you spent your last dime on a bus ticket to New York with dreams of becoming a hip-hop dancer, only to find yourself in an underground dance-crew battle where you got viciously and irreparably “served”?

I turn away for just a moment and scrawl these notes in my production book:
What really happened to him? What kind of tragedy? What can I do to
save

I give myself a swift bop to the head, hoping no one has noticed.

IMPARTIAL,
I scrawl, breaking my all-caps rule again.
You are here to document the truth. You’re not a part of his story; you’re not even going to tell his story. You’re going to let him tell his own story. That’s the movie.

Fallen Empire 1: Star Nomad by Lindsay Buroker
Here We Are Now by Charles R. Cross
Harp's Song by Shine, Cassie
The Fire Lord's Lover - 1 by Kathryne Kennedy
The Tempest by William Shakespeare
When the Air Hits Your Brain: Tales from Neurosurgery by Vertosick, Frank, Jr.
Otherwise Engaged by Suzanne Brockmann
H.R.H. by Danielle Steel
To Catch a Man (In 30 Days or Less) (The BAD BOY BILLIONAIRES Series) by Angelo, Judy
Haole Wood by DeTarsio, Dee