Read The God Virus: How Religion Infects Our Lives and Culture Online

Tags: #The God Virus: How Religion Infects Our Lives and Culture

The God Virus: How Religion Infects Our Lives and Culture 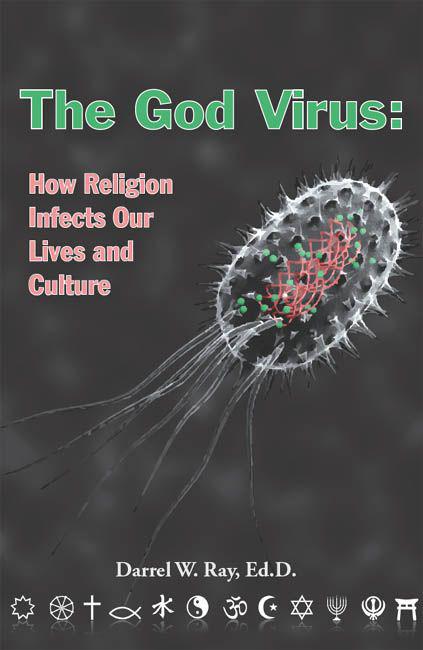 How Religion Infects
Our Lives and Culture

Copyright © 2009 by Darrel W. Ray. All rights reserved. No part of this publication may be reproduced, stored in a retrieval system or transmitted in any form or by any means, electronic, mechanical, photocopying, recording, or otherwise without the prior written permission of the copyright holder, except brief quotations used in a review.

The process of writing, interviewing and researching gave me the opportunity to hear the stories of many who have escaped religion. Most of their stories reflect the following four themes:

1. Events that opened their eyes to religious manipulation in their life or family;

2. Long hidden or suppressed doubts about the teachings;

3. Their ultimate act or declaration of liberation from organized religion; and

4. The double-edged sword of living without the crutch of a supernatural friend and learning to accept full responsibility for life.

Many of them recounted both the terror and the relief they felt after leaving religion behind. Terror at realizing there was no longer an imaginary friend; relief that no one was looking over their shoulder any more. Several described the experience as similar to that of a child learning to go to sleep without a favorite teddy bear. Others described it as simply growing up or outgrowing the need for the imaginary friends of childhood.

I don’t want to leave the impression that everybody who contributed and assisted with this book agrees with it completely. Each of us has our own journey. My hope is that the questions and tools this book offers will lead readers to critically examine the influence of religion in their life and culture.

It is a pleasure to acknowledge the friends and colleagues who helped me improve this book in many ways. My son, Aaron, was the initial inspiration. Our talks about religion and philosophy led me to believe there is much to share from my life and academic training. Dr. Dan Dana, my lifelong friend and colleague, provided encouragement and support at every step. Our monthly supper talks helped refine many ideas. It is a profound gift to have such a loyal friend.

Missy Andeel, Susan Henrie and Jaime Vogt provided remarkable feedback that demonstrated to me the power of the god virus metaphor. I am grateful for their efforts and willingness to share their experiences with me.

Susan Hart and Judy Roepke stayed close to the project, offering support and feedback at each stage. Our many talks and shared experiences resulted in new ideas and some changes.

Life is full of coincidences. On a plane to Europe, I met Ceil Wirth and struck up a conversation with her about this book. She subsequently asked to read the manuscript. Her questions and editing suggestions led to many instrumental changes. We do not agree on everything, but her ideas and encouragement were welcome.

I am grateful also to Kenny Nipp, Earl Doherty and Hemant Mehta, who saw the value of the manuscript and encouraged me to see it through to completion.

Thanks to Shayne Schuldt, who did a wonderful job in the design and graphics of the book, including the cover.

I am also indebted to my two editors, Kirsten McBride and Deborah Shouse, for their attention to detail and critical eye.

Although I cannot use their names here, I am grateful to the many religious people I interviewed as part of my research for the book. While some were open to discussing and critiquing my ideas, most did not wish to be acknowledged.

Chapter 1: Religion As a Virus

Chapter 2: How Religions Survive and Dominate

Chapter 4: God Loves You - The Guilt That Binds

Chapter 5: Sex and the God Virus

Chapter 6: The Myth of Unchanging Morality

Chapter 7: Jesus My Personal Savior: The Roots of American Evangelism

Chapter 9: Understanding and Living With the God Virus

Chapter 11: The God Virus and Science

Chapter 12: The Future of an Illusion

“The chains men bear they forged themselves. Strike off their chains and they will weep for their lost security.”

Every day religion affects us in ways we may not realize. It makes your Uncle Ned spend hours praying for you; it gives your Baptist neighbor a reason to reject her own child who married a Catholic; it teaches your Pentecostal sister to spank her children to keep them from going to hell; it requires a Catholic priest to deny his sex drive; it causes people to give enormous amounts of money to religious organizations; and causes you to avoid talking to your cousin Jennie for fear she may try to convert you to Jehovah’s Witnesses. Religion has both obvious and subtle influences – on you and on society.

This book explores the impact of religion on you and your world. It draws open the curtain of mystery and offers ways to understand and make informed decisions about religion.

Have you ever wondered what makes religion so powerful? What makes people profess deep faith even as they act in ways that betray that faith? What makes people blind to the irrationalities of their own religion yet see clearly the problems of other religions? How does it weave its way into our political system? If these and similar questions interest you, this book will help you understand its power in you, your family and your culture.

For thousands of years, religion penetrated societies, largely unexplained and unchallenged. It simply existed. Those who attempted to question or expose religion were often persecuted, books burned, excommunicated, or even executed. From Galileo to Darwin, Salman Rushdie to Theo van Gogh,
1
it could be hazardous to critique or explain that which the church, priest or imam said was unexplainable.

Before the germ, viral and parasite theory of disease, physicians had no tools to understand disease and its propagation. Priests told people disease was a result of sin, Satan and evil spirits. With the discovery of microbes, scientists gained new tools to understand disease. They could study infection strategies, immunity, epidemiology, and much more. Suddenly the terrible diseases of the past were understandable. The plagues of Europe, yellow fever, small pox, pneumonia, tuberculosis, syphilis, etc., were now removed from the divine and placed squarely in the natural world.

1
Galileo was put under house arrest for the last year of his life; Darwin’s work has been suppressed by many religions since it was first published in 1859; Salman Rushdie has had a death threat over him since writing his novel
Satanic Verses
(Macmillan, 2000) and Theo van Gogh was murdered for producing a short film critical of Islam.

Various philosophers – from Spinoza to Voltaire, Feuerbach to Marx – blazed a path toward understanding religion and its role in society, but it was not until Richard Dawkins' idea of “viruses of the mind”
2
that we gained a ready-made way to examine religion as closely as we look at the epidemiology of the flu virus. This book will show how religions of all kinds fit in the natural world, how they function in our minds and culture and how similar they are to the germs, parasites and viruses that inhabit our bodies.

This book owes a great deal to Richard Dawkins and Daniel Dennett,
3
but it seeks to go a step further by showing how their revolutionary ideas work in everyday life. The paradigm that they pioneered can explain the fundamentalism of your Uncle Ned, the sexual behavior of a fallen mega-church minister, the child-rearing practices of your Pentecostal neighbor, why 19 men flew planes into the World Trade Center or why women blow themselves up in the crowded markets of Baghdad.

As a member of Western culture, you are affected by religious indoctrination. No matter what your own upbringing is, you live in a religious sea and cannot help but imbibe some of the waters. This book will help you look at areas you may have overlooked in your journey. Religious dogma, habit, beliefs or guilt may affect you in ways you may not recognize.

In recent years I have become alarmed at the role religion increasingly plays in society. Religion seems to inject itself into schools, courts, legislatures, presidential politics and local school boards, detracting from rational conversation about real-world problems like science education, economic development, disaster relief and war.
4
Outside the United States, the violence and intolerance expressed by fundamentalists and cults throughout the world bring an urgency to the task of understanding religion and its power. Some very scary people are preaching hatred and intolerance. Their words sound similar to the language of ethnic cleansing.

4
The religious counterparts to these are the push for in-school alternatives to evolution, creationism, stem cell research opposition, religious leaders declaring various hurricanes god’s wrath on certain cities like Orlando or New Orleans and George W. Bush calling the war in Iraq a Crusade.

Here are quotes from some well-known leaders:

I hope I live to see the day when, as in the early days of our country, we won’t have any public schools. The churches will have taken them over again and Christians will be running them. What a happy day that will be!

There will never be world peace until God’s house and God’s people are given their rightful place of leadership at the top of the world.

The long-term goal of Christians in politics should be to gain exclusive control over the franchise. Those who refuse to submit publicly to the eternal sanctions of God by submitting to His Church’s public marks of the covenant – baptism and holy communion – must be denied citizenship, just as they were in ancient Israel.