Read The Going Down of the Sun Online

The Going Down of the Sun 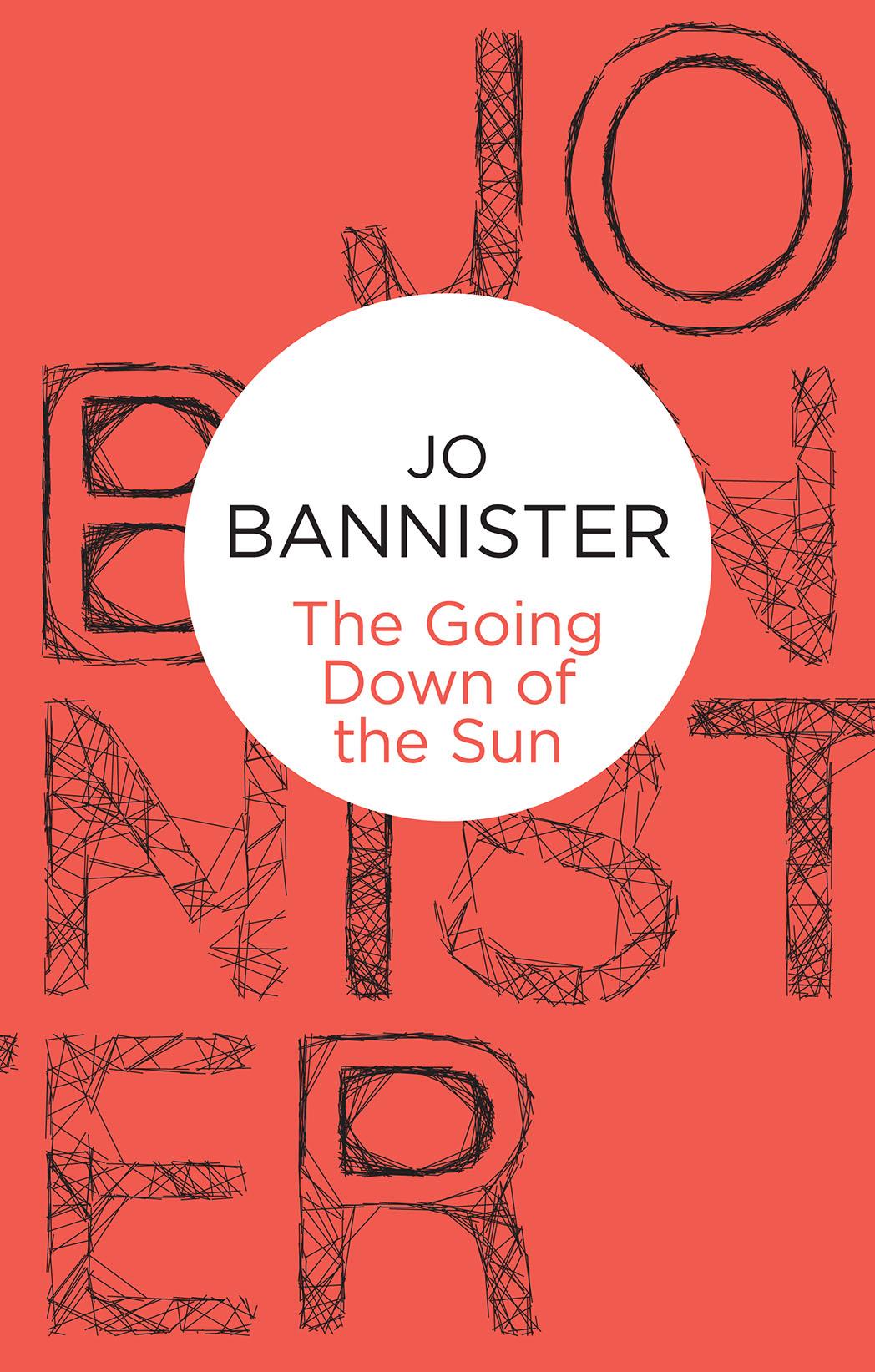 Contents
Jo Bannister
The Going Down of the Sun

Jo Bannister lives in Northern Ireland, where she worked as a journalist and editor on local newspapers. Since giving up the day job, her books have been shortlisted for a number of awards. Most of her spare time is spent with her horse and dog, or clambering over archaeological sites. She is currently working on a new series of psychological crime/thrillers.

After the hole in his chest had healed and the strength was returning to his right shoulder, his doctor recommended that Harry take a holiday. Since Harry's doctor had known my husband longer, and hardly less intimately, than I, I presume he made this suggestion from the safety of a locked room adjoining the surgery, through the keyhole.

Our first matrimonial bust-up had arisen when I asked where we were going on holiday. When I wouldn't take “Nowhere” for an answer Harry lost his temper, thumped the table and went to sulk in the garage. We'd been playing chess. It was three days before I found the last pawn nestling among the fronds of a Mother-in-Law's Tongue. For my holiday that year I went sailing off the west coast of Scotland. For his, Harry stripped down the engine of his Riley.

The police surgeon had taken the precaution of tidying any potential missiles out of sight, and since Harry wanted his approval to return to work he couldn't storm off and sulk somewhere either. He had to grit his teeth and bear it “Holiday?”

A nice brisk holiday, said the doctor, with plenty of fresh air and exercise, would get his damaged lung working, free the kinks left by the bullet, build up his strength and stamina, and generally restore him to the peak of physical fitness required of a Detective Superintendent in the modern police service. Nobody outside the firm appreciates the toll that paperwork exacts; and tragically enough, it was his form-filling arm that was affected. There was a time when we seriously wondered whether he'd ever complete a 53b Drawing Pin Requisition again.

He had his back against the wall, but he gave it his best shot. “Car maintenance is a surprisingly energetic occupationâ”

“No doubt, no doubt,” said the doctor briskly. “But what I had in mind was more a week's sailing off the west coast of Scotland.”

We picked up the boat in Ardfern, a neat little sloop of about twenty-four feet.
Rubh'an Leim
was identical in every wayâincluding the fact that no Sassenach could pronounce her nameâto the
Rubh'an Leanachais
I'd sailed here the previous year, except in one strange particular. The cabins that had accommodated four of us quite comfortably last summer had unaccountably shrunk so that Harry banged his head, or his knee, or his healing shoulder on one projection or another every time he turned round. Getting him in and out of the heads was a shoehorn job.

He couldn't get used to the idea that you can't always stand upright and move in straight lines on a boat. He was like a drill sergeant from one of the taller Regiments of Guards trying to remain a fine figure of a man under a ceiling about five feet off the floor. I was beginning to doubt the wisdom of the enterprise before the man from the boat yard had finished his doom and gloom lecture about how easy it is to blow up a boat with its own gas and gone ashore.

For two pins I'd have followed him. If Harry had said, “I can get cold, wet and cramped in my own bath” just once more I would have followed him, and cast off the warps and shoved the
Rubber Lion
in the general direction of the Corryvreckan whirl-pool before my nearest and dearest could thread his way past the chart-table.

The essence of the problem was not that he was something over six feet and built to match, nor that his shoulder still made bending and twisting awkward, nor even that he had the same natural aptitude for life afloat as a brick. The essence of the problem was that he wanted to be miserable. He was here under protest and he wasn't going to let me forget it. The police surgeon might have the power to send him on holiday, even if it did smack of cruel and unusual punishment, but by God
nobody
could make him enjoy it!

As soon as I'd familiarised myself with the gear again we got under way. I let Harry take us out on the engine while I got the sails rigged. I wasn't planning on doing much motoring this weekâif you get in the way of starting the engine when it's handier than sailing you soon give up sailing altogetherâbut the throaty rumble and the vibration under his feet and the stink of diesel might help shift that martyred look off his face. I reminded him that you push a tiller left to steer a boat right, in time to avoid a rock if only just, then left him to play with the controls while I got on with the serious business of setting sail.

We had a choice of head-sails. With a breeze that was sturdy rather than stiff, I opted for the working jib. Later in the week, when I had the feel of the boat, I'd be using the genoa in stronger winds than this, but for now the jib was sufficient. The storm-jib was thoughtfully stowed in a red bag and I hoped not to need it at all.

I bent the head-sail onto the forestay, attached halyard and sheets, and sat back on the fore-hatch to admire the result. Then I took it all off again and put it back the right way up. I doubt if Harry would have noticed, but I'd have been the toast of Ardfern if I'd sailed out hauling my jib upside down.

The mainsail was rolled onto its boom, lacking only its battens and brute strength to set it. I unrolled it into the cockpitâHarry claimed I was trying to smother himâand fought bitterly with the battens until I realised that, while two of them were the same length, one was wider than the other and would never go into the top pocket however much I swore at it.

I moved up to the foot of the mast, bracing myself against the movement under me that always seems so pronounced on the first day and, barring hurricanes, is hardly noticeable after that. The burgee went up first and grafted itself firmly to the masthead, giving me a small thrill of success. It's harder to get a clean hoist with a burgee than almost anything in the sail-locker.

The little scrap of nylon fluttered busily a little starboard of the stem. The wind was in the south, which meant we could set sail without altering course. The main went up, the jib went up, I scuttled back and sheeted them both in; then I took the tiller from Harry and turned the key in the ignition. “Finished with engines.”

He looked severely at me. “You've cut your finger.”

Of course I'd cut my finger. You're constantly cutting your fingers aboard boats; also barking your shins, skinning your elbows and excavating holes in your backside by sitting on cleats. It's all part of the fun.

“Why are you grinning?” demanded Harry.

But little by little, some of the magic of the day entered his soul. The sparkle of the sun on the jewel-blue water, the whisper of the foam creaming along the bow, the small creaking and snapping sounds of the sails and the rigging; and the way the mouth of Loch Craignish widened as we stood towards it, and a little fleecy cloud that hung over the violet Paps of Jura twenty miles down the Sound, all conspired to lighten the heart and raise the spirit. Although to be honest he'd still sooner have been up to his elbows in a nice grisly murder back home in Skipley, he was finally beginning to see that sailing had its charms too.

We beat down to Craignish Point and rounded the little headland through the gap marked on the chart as the Dorus MÃ³r. With the wind behind us now we ran up past the northern tip of Jura, past infamous Corryvreckanâeven in the moderate conditions of the day we could hear the thunder of the disturbed seas and see white water flung mast-high as the tide raced through the narrow channelâand past Scarba into the pretty region around Loch Melfort, where the hills of the mainland and the hummocks of the islands folded together in a concert of pastel greys as the day's wind died towards evening.

We dropped the hook in a little bay on Shuna's north shore, and I went below to get dinner on the stove. In the cockpit I could hear Harry softly whistling to himself as he tinkered with the engine. I smiled. I didn't care what he did to the engine, as long as he got it back together again before we had to return the boat.

After a time, with the stove humming under its breath and good smells beginning to rise from the saucepans, I heard the music from above break abruptly, then the unmistakable two-tone of a wolf-whistle. I was up the companionway before you could say “Rob Roy.”

“Now that,” said Harry, admiration thick in his voice, “is what I call a boat.”

Myself, I couldn't see it. I could see plenty of money, plenty of power. I suppose there was a certain grace in the flare of the high bows, the strong sweep of the bull. Certainly she was making enough noise as she ran down through the long afternoon towards Craignish Point, but then so would a motor-home.

On the subject of sail versus power I'm a bigot. I reckon if you're going to drive places you might as well stick to the roads: it's quicker, it's cheaper and you're less likely to hit a rock. I accept, reluctantly, the place of power in maritime commerce, but a pleasure boat without sails is a contradiction in terms.

Harry, on the other hand, considers the internal combustion engine conclusive proof of God, so this high-stepping, highly polished little gin palace riding its bow-wave down the Sound regardless of wind and tide filled him with delight.