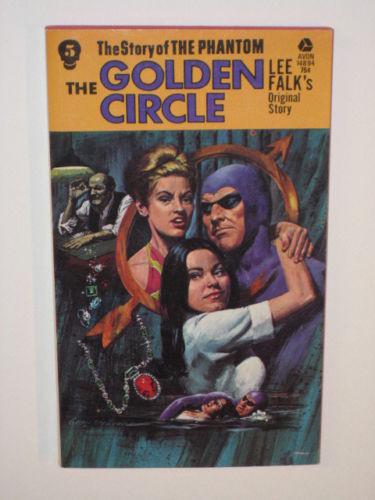 The Story of THE PHANTOM

HOW IT ALL BEGAN

Over four hundred years ago, a large British merchantman was attacked by Singg pirates off the remote shores of Bangalla. The captain of the trading vessel was a famous seafarer who, in his youth, had served as cabin boy to Christopher Columbus on his first voyage to discover the New World. With the captain was his son, Kit, a strong young man who idolized his father and hoped to follow him as a seafarer. But the pirate attack was disastrous. In a furious battle, the entire crew of the merchantman was killed and the ship sank in flames. The sole survivor was young Kit who, as he fell off the burning ship, saw his father killed by a pirate. Kit was washed ashore, half dead. Friendly pygmies found him and nursed him to health.

One day walking on the beach, he found a dead pirate dressed in his father's clothes. He realized this was the pirate who had killed his father. Grief stricken, he waited until vultures had stripped the body clean. Then on the skull of his father's murderer, he swore an oath by firelight as the friendly pygmies watched. "I swear to devote my life to the destruction of piracy, greed, cruelty, and injustice, and my sons and their sons shall follow me."

descendants would live by. In time, the pygmies led him to their home in Deep Woods in the center of the jungle where he found a large cave with many rocky chambers. The mouth of the cave, a natural formation, carved by the water and wind of centuries, was curiously like a skull. This became his home, the Skull Cave. He soon adopted a mask and a strange costume. He found that the mystery and fear this inspired helped him in his endless battle against worldwide piracy. For he and his sons who followed became known as the nemesis of pirates everywhere, a mysterious man whose face no one ever saw, whose name no one knew, who worked alone.

As the years passed, he fought injustice wherever he found it. The first Phantom and the sons who followed found their wives in many places. One married a reigning queen; one a princess; one a beautiful red- haired barmaid. But whether queen or commoner, all followed their men back to the Deep Woods, to live the strange but happy life of the wife of the Phantom. And of all the world, only she, wife of the Phantom, and their children could see his face.

Generation after generation was born, grew to manhood, and assumed the tasks of the father before him. Each wore the mask and costume. Folk of the jungle and the city and sea began to whisper that there was a man who could not die, a Phantom, a Ghost Who Walks. For they thought the Phantom was always the same man. A boy who saw the Phantom would see him again fifty years after; and he seemed the same. And he would tell his son and his grandson; and his son and grandson would see the Phantom fifty years after that. And he would seem the same. So the legend grew. The Man Who Cannot Die. The Ghost Who Walks. The Phantom.

The Phantom did not discourage this belief in his

do
u
s—sometimes almost impossible—odds, he found that the awe and fear the legend inspired was a great help in his endless battle against evil. Only his friends the pygmies knew the truth. These tiny people, to compensate for their stature, mixed deadly poisons for use on their weapons in hunting or defense. But it was rare that they were forced to defend themselves. Their deadly poisons were known through the jungle, and they and their home, the Deep Woods, were dreaded and avoided. There was another reason to stay away from the Deep Woods—it soon became known that this was a home of the Phantom, and none wished to trespass. ,

Through the ages, the Phantoms
c
reated several more homes or hideouts in various parts of the world. Near the Deep Woods was the Isle of Eden, where the Phantom taught all animals to live in peace. In the southwest desert of the New World, the Phantoms created an aerie on a high sheer mesa that was thought by the Indians to be haunted by evil spirits and became known as Walkers Table—for the Ghost Who Walks. In Europe, deep in the crumbling cellars of an ancient castle ruins, the Phantom had another hideout from which to strike against evildoers.

But the Skull Cave in the quiet of the Deep Woods remained the true home of the Phantom. Here, in a rocky chamber, he kept his chronicles, written records of all his adventures. Phantom after Phantom faithfully wrote his experiences in the large folio volumes. Another chamber contained the costumes of all the generations of Phantoms. Other chambers contained the vast treasures of the Phantom, acquired over centuries, used only in the endless battle against evil.

Thus, twenty generations of Phantoms lived, fought, and died, usually violently, as they followed their oath. Jungle folk, seafolk, and city folk believed him the same man, the Man Who Cannot Die. Only the pygmies knew that, always, a day would come when their great friend would lie dying. Then, alone, a strong young son would carry his father to the burial crypt of his ancestors where all Phantoms rested. As the pygmies waited outside, the young man would emerge from the cave, wearing the mask, the costume, and the Skull Ring of the Phantom; his carefree happy days as the Phantom's son were over. And the pygmies would chant their age-old chant, "The Phantom is dead. Long Live the Phantom."

This story of The Golden Circle is an adventure of the Phantom of our time—the twenty-first generation of his line. He has inherited the traditions and responsibilities created by four centures of Phantom ancestors. One ancestor created the Jungle Patrol. Thus, today, our Phantom is the mysterious and unknown commander of this elite corps. In the jungle, he is known and loved as The Keeper of the Peace. On his right hand is the Skull Ring that leaves his mark—the Sign of the Skull—known and feared by evildoers everywhere. On his left handr—closer to the heart—is his "good mark" ring. Once given, the mark grants the lucky bearer protection by the Phantom, and it is equally known and respected. And to good people and criminals alike—in the jungle, on the seven seas, and in the cities of the world—he is the Phantom, the Ghost Who Walks, the Man Who Cannot Die.

The slender blonde girl smiled as she reached out and put her arms around him.

He'd never seen her before.

The speeding night train lurched just then, causing him to cross the threshold into his compartment. While he was off-balance, the lovely blonde kissed him.

Then, easing around him, she pushed the compartment door shut. "I'm so glad you're back, darling. Whatever took you so long?"

He was a big man, broad-shouldered and tall. Right now he was wearing dark glasses and a belted raincoat. "I thought I knew most of the games people play," he said. "But this is a new one. Who are you?"

Putting one slender hand to her mouth, the girl backed off. Behind her, the window shade had been pulled almost all the way down. Only a thin strip of darkness, splattered with rain, showed. "I don't," she said, "I don't understand you, darling. What are you trying to do to me?"

The Phantom didn't reply. He stood with his back to the door, gloved hands on hips, watching the girl. He was returning on a New York bound train from a trip to Chicago. Though he preferred living in the
Deep Woods,
on the dark continent where he'd been born, the Phantom did frequently travel, to hunt down a criminal, to carry out an important mission. He'd chosen to go by train because he had Devil, his trained wolf, with him. In fact, he'd just been in the baggage car taking a look at the big gray animal.

And now here was this pretty young blonde in his compartment. He gave her a faint smile. "If you're in some kind of trouble, miss, tell me and maybe I can help," he told her. "But if you're thinking of trying some kind of con, you've come to the wrong place."

"You keep on. . . ." She hesitated, felt out behind her, dropped down onto a blue-gray seat. "You keep on acting, darling, as though you really don't know me. Is that any way ... any way to. .. ." She brought both hands up to her face and began to cry.

Not moving, the Phantom continued to watch her. She was dressed in a simple, short-skirted navy-blue suit. Her long hair was pulled back, held with a twist of black ribbon. On the left lapel of her suit coat was a golden pin. About the size of a half dollar, the gold pin consisted of a circle pierced by an arrow. This was the first time the Phantom had seen the emblem. He didn't then realize how important it was going to be to him during the next few days.

The girl said, "Is this any way to act on our honeymoon, darling?" She looked hopefully up at him, rubbing at the corner of her eye.

The Phantom laughed. "Honeymoon? This gets better and better." He took three steps toward her. "Suppose you drop the act and tell me what. . . ."

Her eyes widening, the girl looked beyond him. "Aunt Beth, something awful has happened."

Turning, the Phantom saw a gaunt woman of fifty stepping into the room. She clutched a large straw handbag to her narrow chest. Before she spoke she gave a quick nod to the girl, and tapped one boney hand on the side of the purse. "Why, dear, you've been crying." She turned on the Phantom. "Young man, what have you been doing to this poor child?"

The Phantom held his gloved hands out, spread n part in a gesture of mock defeat. "Ladies," he said, "it's late. Whatever silly game you're contemplating isn't going to work. So let's call it a night, shall we?"
I To
strode toward the door of his compartment, reach- ing for the handle.

"Shut up and get away from the door, buddy boy."

He shrugged, moved to the other seat and sat. Crossing his legs, he locked his hands around his knees. "One doesn't run into many train robbers anymore. Is that what you ladies are?"

Ignoring him, the older woman asked the blonde, "Was he here when you got here?"

"No, he came in a few minutes afterward."

"Good, good." She kept the black revolver aimed directly at the Phantom while she talked to her partner. "'Then he didn't hear anything."

"I told you," reminded the slim blonde, "nobody could hear anything anyway. What with all the noise of the train and the storm and you put a cushion...."

"That's quite enough, dear," cut in the gaunt woman. She let out a raspy sigh and sat down beside the trim blonde. "We'll wait here a few moments with buddy boy before we go on our merry way."