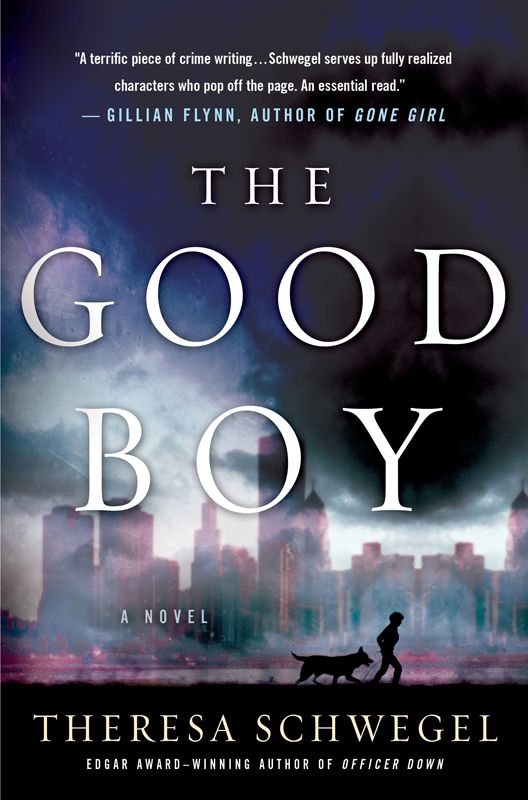 For my husband, my daughter, and my dogs—my home

“Is that dog friendly?” asks the kid who’s spent the past half hour working his way around to the question. In that time, he quit the monkey bars in Addams Park’s broken-down jungle gym, did a few laps on the paved path between Ashland Avenue and the CHA low-rises, acted like he was interested in a nearby transformer bank, and finally got up the nerve to come over and ask.

In that half hour, Pete Murphy threw a tennis ball to his partner Butch about a hundred times, getting him some exercise after a long shift, and maybe showing off a little.

“He’s friendly,” Pete says. “You want to throw the ball?”

The kid shrugs and looks down at the grass, which is about like the condition of his pants: anemic-looking, worn away in places. He’s got light-black skin and black hair wrestled into tight, dirty braids. He probably has a nice smile and it probably doesn’t get used too often.

“Here,” Pete says, retrieving the slobbered ball from Butch and tossing it in the kid’s general direction, since he won’t want to get too friendly himself, Pete’s uniform and all. The kid catches the ball, easy, turns it around in his hands.

The kid looks over his shoulder, watches a couple of old-timers wander toward the abandoned oak-tree trunk inexplicably set in the middle of a double block of nothing taller than weeds. It’s a park fixture more popular than the playground, since most of the folks who hang out here mean something different when they talk about getting swung.

Pete figures the men must see him which means they aren’t up to anything or else they’re already high, and anyway he’s off the clock, so to each his own. He says to the kid, “I’m Officer Murphy. And this is Butch.”

Butch cocks his head, attention on the ball.

“My name’s Ralla,” the kid says, tough lip. He squares his shoulders and winds up, a few years too young for an arm, and throws the ball. It pops up, short, and Butch catches it before it hits the ground—his skill erasing any worry the kid might have had about his own.

Butch returns and leaves the ball exactly halfway between Pete and Ralla, his version of diplomacy. Ralla hangs back, waiting for the okay.

“Units in Eleven and all units citywide,”
the dispatcher announces from the radio clipped to Pete’s shirt. He turns down the squelch and tilts an ear to listen to the rest: “
Anonymous 911 caller states there will be a shooting at Madison and Hamlin. Caller claims the offenders are Four Corner Hustlers. No further description or details.
”

Butch looks over at Pete like he wants to know if they’re going back to work. They could; they’re only a bowshot from Eleven. But they’re also on target for a good three days off and anyway, Pete’s not going to be the guy to bite into
that
gang beef. Been there, not doing that.

He nods toward the ball, tells Ralla, “Go ahead.”

Ralla’s next throw sends the ball over Butch’s head, but the dog’s still quick enough to catch it before it bounces.

“So, Ralla,” Pete says, “you live here, in the Vill?” Not the best of what’s left of Chicago’s public housing but not the worst, either.

The kid checks Pete sideways like a pitcher would a man on first. He eyes the radio. “Do
you
?” Turning the question around, same game as Pete’s.

“We do not live here, no. But our office is close by, and Butch is always hounding me to stop.”

Ralla looks skeptical, like he doesn’t get the play on words. Or else he got it all right, but what he’s also got is hood smarts. That means he knows the closest police station is two miles away with a good twenty city blocks and as many parks in between. Nicer parks. Parks people use to enjoy sunny days. Not parks where people use.

That makes this park a pretty questionable choice for a game of fetch.

“I was only asking,” Pete says, “’cause we come here a lot, and I’ve never seen you before. And I like a guy who can throw the ball.”

“You looking for somebody?” Ralla coming straight in now, the same way Pete’s son Joel would if he thought he was being sugared.

“You looking for trouble, then?”

“Everybody lost around here,” Ralla says. He looks over his shoulder at the low-rises. “I know where I’ma go, though. I’m just staying by my uncle’s right now.”

“In the Abbotts.” Ralla throws the ball again and then rolls up his throwing arm’s dirty sleeve and that’s when Pete sees what look like cigarette burns: hot, pink scars polka-dotted from the inside of his wrist to the crook of his elbow.

No way there’s a happy ending there and Pete knows better than to ask, any question from him too official. Then again, the kid is the one who presented the evidence, so: “Your uncle. Is that your mom’s brother?”

“Well, family’s family,” Pete says, realizing the abandoned trunk isn’t the only strange tree in this hood. “Do you get along pretty well with your uncle?”

“Yeah. Only met him once, though. He stays by his grandma’s.”

Pete decides to drop it, the line of questioning gone crooked.

Butch brings the ball back to Ralla and he throws it low and fast, a worm burner. The dog goes full-throttle to get on top of it, nose in the dirt. His return is a wide, proud canter, the ball held high.

“Loyal dogs.” As far as general observations go, Pete might as well have said
four-legged,
but: “What was his name?”

Tyson was the name of one of the torn-up dogs Pete found when he was in tac a few years back and the team busted a dog-fighting ring in Stoney Island, at a day care of all places. Tyson and five other pits named George, which was supposed to be funny. None of the dogs looked like it had ever won a fight. Neither did the guy running the ring, once Pete and company were through with him.

“I guess you had to leave Tyson behind, when you came here?”

“That’s too bad,” Pete says, wondering who got rid of Dad.

Ralla throws the ball again. This time when Butch fetches it he turns, drops it at his own feet, and waits—the start to a little game Joel calls
Butchie Ball
. Curious, Ralla approaches. Butch waits until the kid’s just close enough before he snaps up the ball, spins around and darts off, putting another ten feet between them.

Ralla plays along twice more before he says, “Hey! You the one supposed to fetch!” Then he follows Butch again anyway.

Watching them chase back and forth, Ralla’s spirit transformed, Pete is thankful for the dog. Has to be. He’s a hell of a work dog, sure, but he’s also a facilitator. He starts conversations. He eases tension. He gets people on the level.

Well, most people. The cops who think Pete was merited the K9 job can’t seem to rise above the ‘dog and pony show’ jokes.

“All available units in Eleven,”
the dispatcher says.
“Intelligence confirms the 911 call that a faction of Four Corner Hustlers called the BFMs, Boy-Frank-Mary, will retaliate against other Hustlers in the area of Madison and Hamlin. Caller states there are four BFMs, all young black males, sixteen to eighteen years of age, riding in a maroon Dodge Caravan. Retaliation is for the shooting of Cashual Betts, IR number 1968696 shot on 07 July this year in disputed drug territory. All units be aware: they are armed and extremely aggressive—”

Pete turns the radio down two more clicks. Seems like territory is always the issue with these kids. Strapped and dead-serious, pushing one another off corners like a city-block-size ghetto-rules game of Risk.

After a while Ralla gives up and returns to Pete’s side while Butch settles on a thin patch of dry grass, ball between his paws, face to the sun.

“Butch is the only one who wins that game,” Pete says.

“I know a game,” Ralla says, angling his chin toward Pete. “You got five dollars?” Not quite a demand, but maybe an early try at a grown man’s scam.

“What do you need five dollars for?”

“School,” Pete says, having already wondered why Ralla isn’t there right now, a Thursday past 9:00
A.M.
“Where do you go to school?”

“Ralla from Ralla.” Pete guesses North Carolina but wherever it is, the bus ride might as well be to Mars, as far as it must seem from here. “Is that where you’re going when you get out of here? Home?”

“I guess you don’t want to play my game,” Ralla says, toeing the dirt.

“I’m sorry,” Pete says, “I don’t have five dollars.” Truth is, he doesn’t want to see the kid try to swindle.

As if on cue to bridge the silence, Butch gets up and comes over and drops the ball in front of Ralla’s feet. Ralla picks it up, turns it over, fingers the faded brand name.

Pete says, “You look like you’re about my son’s age. His name’s Joel. He’s real good at history. Memorizing names and places and such. You like history?”

Ralla looks down at the ball, and Pete gets the idea he probably can’t read let alone understand that history, around a place like this, is too often destined to be repeated in the police blotter.

“I hope you get to go home soon,” Pete says.

“Hope don’t help.” He throws the ball as hard as he can.

This time Butch doesn’t fetch because he’s fixed on pack of older boys who’ve appeared, creeping into the park from the public housing.

“Butch,
fuss,
” Pete says and the dog obeys, heeling to his owner’s left.

“That’s Dontay,” Ralla says. “My mom’s boyfriend.” And then he goes to fetch the ball himself.

From this distance, Pete can’t see the boys well enough to tell any of them apart, all of them black-skinned and dressed in blues; even if he had them in a lineup, he guesses they’d still look like cards from the same deck.

He’ll bet they’ve picked him out already, though—his own blues—because the five of them simultaneously shift course and head north toward the blind alley that cuts in at Roosevelt, their collective strut scattered.

No Time for Goodbyes by Andaleeb Wajid
Beautiful Perfection (Beautifully Unbroken Book 2) by Brittle, D M
The Detective and Mr. Dickens by William J Palmer
Three-Way Games by Dragon, Cheryl
A Symphony of Echoes by Jodi Taylor
Uncut by Betty Womack
The Adventures of a Love Investigator, 527 Naked Men & One Woman by Silkstone, Barbara
The Healing by Frances Pergamo
Seize the Fire by Laura Kinsale
Bookmaker, The by Fraser, Chris