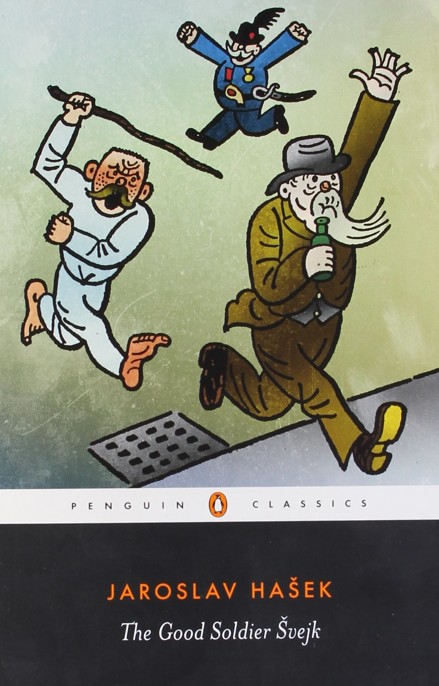 A great epoch
calls for great men. There are modest unrecognized heroes, without Napoleon's glory or his record of achievements. An analysis of their characters would overshadow even the glory of Alexander the Great. To-day, in the streets of Prague, you can come across a man who himself does not realise what his significance is in the history of the great new epoch. Modestly he goes his way, troubling nobody, nor is he himself troubled by journalists applying to him for an interview. If you were to ask him his name, he would answer in a simple and modest tone of voice: "I am Schweik."

And this quiet, unassuming, shabbily dressed man is actually the good old soldier Schweik; that heroic, dauntless man who was the talk of all citizens in the Kingdom of Bohemia when they were under Austrian rule, and whose glory will not pass away even now that we have a republic.

I am very fond of the good soldier Schweik, and in presenting an account of his adventures during the World War, I am convinced that you will all sympathize with this modest, unrecognised hero. He did not set fire to the temple of the goddess at Ephesus, like that fool of a Herostrate, merely in order to get his name into the newspapers and the school reading books.

And that, in itself, is enough.

Schweik, the Good Soldier, Intervenes in the Great War
Page 3

Schweik at the Police Headquarters
Page 13

Schweik Is Ejected from the Lunatic Asylum
Page 29

CHAPTER V
Schweik at the Commissariat of Police
Page 34

Schweik Home Again after Having Broken the Vicious Circle
Page 42

Schweik Accompanies the Chaplain to the Celebration of Mass

Schweik's Misadventures on the Train
Page 197

CHAPTER
I Across Hungary
Page 341

CHAPTER
III From Hatvan to the Frontiers of Galicia
Page 386 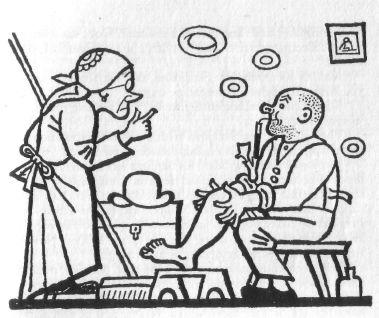 Schweik, the Good Soldier, Intervenes in the Great War.

"So they've killed Ferdinand," said the charwoman to Mr. Schweik who, having left the army many years before, when a military medical board had declared him to be chronically feebleminded, earned a livelihood by the sale of dogs—repulsive mongrel monstrosities for whom he forged pedigrees. Apart from this occupation, he was afflicted with rheumatism, and was just rubbing his knees with embrocation.

"Which Ferdinand, Mrs. Muller?" asked Schweik, continuing to massage his knees. "I know two Ferdinands. One of them does jobs for Prusa the chemist, and one day he drank a bottle of hair

oil by mistake ; and then there's Ferdinand Kokoska who goes round collecting manure. They wouldn't be any great loss, either of 'em."

"No, it's the Archduke Ferdinand, the one from Konopiste, you know, Mr. Schweik, the fat, pious one."

"Good Lord !" exclaimed Schweik, "that's a fine thing. And where did this happen?"

"They shot him at Sarajevo with a revolver, you know. He was riding there with his Archduchess in a motor car."

"Just fancy that now, Mrs. Muller, in a motor car. Ah, a gentleman like him can afford it and he never thinks how a ride in a motor car like that can end up badly. And at Sarajevo in the bargain, that's in Bosnia, Mrs. Muller. I expect the Turks did it. I reckon we never ought to have taken Bosnia and Herzegovina away from them. And there you are, Mrs. Muller. Now the Archduke's in a better land. Did he suffer long?"

"The Archduke was done for on the spot. You know, people didn't ought to mess about with revolvers. They're dangerous things, that they are. Not long ago there was another gentleman down our way larking about with a revolver and he shot a whole family as well as the house porter, who went to see who was shooting on the third floor."

"There's some revolvers, Mrs. Muller, that won't go off, even if you tried till you was dotty. There's lots like that. But they're sure to have bought something better than that for the Archduke, and I wouldn't mind betting, Mrs. Muller, that the man who did it put on his best clothes for the job. You know, it wants a bit of doing to shoot an archduke ; it's not like when a poacher shoots a gamekeeper. You have to find out how to get at him ; you can't reach an important man like that if you're dressed just anyhow. You have to wear a top hat or else the police'd run you in before you knew where you were."

"Why, of course, there was, Mrs. Muller," said Schweik, now concluding the massage of his knees. "If you wanted to kill an archduke or the Emperor, for instance, you'd naturally talk it over with somebody. Two heads are better than one. One gives one bit of advice, another gives another, and so the good work

prospers, as the hymn says. The chief thing is to keep on the watch till the gentleman you're after rides past. . . . But there's plenty more of them waiting their turn for it. You mark my words, Mrs. Muller, they'll get the Czar and Czarina yet, and maybe, though let's hope not, the Emperor himself, now that they've started with his uncle. The old chap's got a lot of enemies. More than Ferdinand had. A little while ago a gentleman in the saloon bar was saying that there'd come a time when all the emperors would get done in one after another, and that not all their bigwigs and suchlike would save them. Then he couldn't pay for his drinks and the landlord had to have him run in. And he gave him a smack in the jaw and two to the policeman. After that they had to strap him down in the police ambulance, just to bring him to his senses. Yes, Mrs. Muller, there's queer goings-on nowadays ; that there is. That's another loss to Austria. When I was in the army there was a private who shot a captain. He loaded his rifle and went into the orderly room. They told him to clear out, but he kept on saying that he must speak to the captain. Well the captain came along and gave him a dose of C.B. Then he took his rifle and scored a fair bull's eye. The bullet went right through the captain and when it came out the other side, it did some damage in the orderly room, in the bargain. It smashed a bottle of ink and the ink got spilled all over some regimental records."

"And what happened to the private?" asked Mrs. Muller after a while, when Schweik was getting dressed.

"He hanged himself with a pair of braces," said Schweik, brushing his bowler hat. "And the braces wasn't even his. He borrowed them from a jailer, making out that his trousers were coming down. You can't blame him for not waiting till they shot him. You know, Mrs. Muller, it's enough to turn anyone's head, being in a fix like that. The jailer lost his rank and got six months as well. But he didn't serve his time. He ran away to Switzerland and now he does a bit of preaching for some church or other. There ain't many honest people about nowadays, Mrs. Muller. I expect that the Archduke was taken in by the man who shot him. He saw a chap standing there and thought : Now there's a decent fellow, cheering me and all. And then the chap did him in. Did he give him one or several?"

"The newspaper says, Mr. Schweik, that the Archduke was riddled with bullets. He emptied the whole lot into him."

"That was mighty quick work, Mrs. Muller, mighty quick. I'd buy a Browning for a job like that. It looks like a toy, but in a couple of minutes you could shoot twenty archdukes with it, thin or fat. Although between ourselves, Mrs. Muller, it's easier to hit a fat archduke than a thin one. You may remember the time they shot their king in Portugal. He was a fat fellow. Of course, you don't expect a king to be thin. Well, now I'm going to call round at The Flagon and if anybody comes for that little terrier I took the advance for, you can tell 'em I've got him at my dog farm in the country. I just cropped his ears and now he mustn't be taken away till his ears heal up or else he'd catch cold in them. Give the key to the house porter."

There was only one customer at The Flagon. This was Bretschneider, a plainclothes policeman who was on secret service work. Palivec, the landlord, was washing glasses and Bret-schneider vainly endeavoured to engage him in a serious conversation.

"We're having a fine summer," was Bretschneider's overture to a serious conversation.

"All damn rotten," replied Palivec, putting the glasses away into a cupboard.

"That's a fine thing they've done for us at Sarajevo," Bret-schneider observed, with his hopes rather dashed.

"What Sarajevo's that?" inquired Palivec. "D'you mean the wineshop at Nusle? They have a rumpus there every day. Well, you know what sort of place Nusle is."

"No, I mean Sarajevo in Bosnia. They shot the Archduke Ferdinand there. What do you think of that?"

"I never shove my nose into that sort of thing, I'm hanged if I do," primly replied Mr. Palivec, lighting his pipe. "Nowadays, it's as much as your life's worth to get mixed up in them. I've got my business to see to. When a customer comes in and orders beer, why I just serve him his drink. But Sarajevo or politics or a dead archduke, that's not for the likes of us, unless we want to end up doing time."

Bretschneider said no more, but stared disappointedly round the empty bar.

"You used to have a picture of the Emperor hanging here," he began again presently, "just at the place where you've got a mirror now."

"Yes, that's right," replied Mr. Palivec, "it used to hang there and the flies left their trade-mark on it, so I put it away into the lumber room. You see, somebody might pass a remark about it and then there might be trouble. What use is it to me?"

In a Glass House by Nino Ricci
Fan-Tastic by Stephani Hecht
Driving Blind by Ray Bradbury
Woods (Aces MC Series Book 5) by Aimee-Louise Foster
Tough Luck: A New Adult Billionaire Romance (The Vegas Billionaire Obsession Series Book 3) by Grey, Chloe
Howie Carr by The Brothers Bulger: How They Terrorized, Corrupted Boston for a Quarter Century
Fighting for Arielle by Karina Sharp
Mr. Monk in Outer Space by Goldberg, Lee
No Lifeguard on Duty: The Accidental Life of the World's First Supermodel by Janice Dickinson
Warrior of the Isles by Debbie Mazzuca