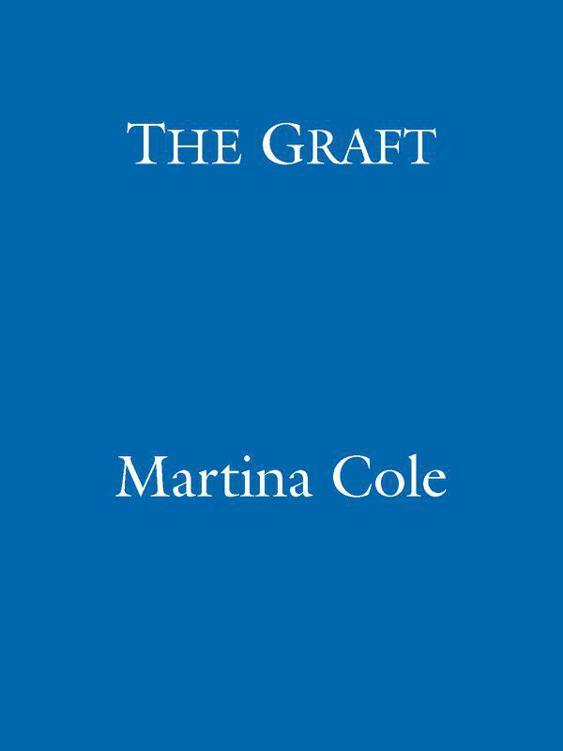 The right of Martina Cole to be identified as the Author of
the Work has been asserted by her in accordance with
the Copyright, Designs and Patents Act 1988.

Apart from any use permitted under UK copyright law,
this publication may only be reproduced, stored, or transmitted,
in any form, or by any means, with prior permission in writing
of the publishers or, in the case of reprographic production,
in accordance with the terms of licences issued by the
Copyright Licensing Agency.

First published as an Ebook by Headline Publishing Group in 2008

All characters in this publication are fictitious and any
resemblance to real persons, living or dead, is purely
coincidental.

Martina Cole is the No. 1 bestselling author of eleven outstandingly successful novels. When
The Graft
was first published in hardback it shot straight to No. 1 on the
Sunday Times
bestseller list and it topped the charts for several weeks. Her previous novel,
The Know
, was selected for the
Richard & Judy
book club as one of the Top Ten Best Reads of 2003. Martina Cole’s other novels have all enjoyed similar success:
Maura’s Game
was the No. 1 bestselling paperback original title for 2002 and
Faceless
was a No. 1
Sunday Times
bestseller.
Dangerous Lady
and
The Jump
have gone on to become hugely popular TV drama series and several of her other novels are in production for TV. Martina Cole has a son and daughter and she lives in Essex.

‘Martina Cole pulls no punches, writes as she sees it, refuses to patronise or condescend to either her characters or fans . . . And meanwhile sells more books than almost any other crime writer in the country’
Independent on Sunday

‘Martina Cole again explores the shady criminal underworld, a setting she is fast making her own’
Sunday Express

‘Set to be another winner’
Woman’s Weekly

For Christopher Wheatley.
It’s an honour and a privilege to be your friend.

For Ricky and Maria.
Remembering when we were kids.

It was so hot in the room, like an oven. He could feel the sweat trickling down his face and wiped it away carelessly. He wished that it would rain, that the storm would break and everything would finally be over.

The thought brought a smile to Nick Leary’s handsome face.

He was restless, tired but far from sleep. Unable to sleep. He had too much to think about.

His wife was sleeping soundly beside him, her faint snoring loud in the quiet room. She was as usual curled up in a ball, her face devoid of the frown lines that day-break inevitably brought with it. Her blond hair was still immaculate even as she slept. Tammy never looked untidy, it was part of her personality. He believed that if she had a head-on crash in her 4 × 4 she would die with every hair in place and her make-up untouched, like film stars did in the movies. She broke wind gently and it made him grin in the dimness of the room. She would be mortified when he told her. Tammy hated any reference to bodily functions and would go to great lengths to hide the fact that she burped, farted and crapped just like everyone else. She snuggled down and he smiled in the dimness.

He was lying on his back, one forearm thrown casually across his eyes. Nick Leary was a big man. Big in stature, and with a big personality to match. He had a reputation as a shrewd businessman and loyal friend. He cultivated this image carefully because it was important to him.

He rarely did anything without it being of some benefit to himself, which was why he had an eight-bedroomed farmhouse, enough money to do what he wanted, and a lifestyle envied by most of his peers. But Nick had grafted for it, had pulled himself and his family up by the proverbial bootstraps - and pulled them up as high as they could go.

He heard a distant rumble of thunder and felt his whole body finally relax. A few seconds later the insistent drumming of the rain hit the windows and he almost cried out with joy. He had prayed for this rain, known that it was coming and dreaded that it might not arrive. He had a tension headache. He always got them when it was stormy but this time he had a lot on his mind as well. He moved restlessly around in the bed once more.

Tammy’s voice was muffled but he could hear the impatience in it.

He willed his body to be still. All he needed now on top of everything else was her up and ranting her head off.

Tammy Leary liked her Sooty and Sweep and no one interfered with that - not if they valued their own hearing anyway. Her nasal twang he could cope with in the day, he loved her dearly after all. But at night her voice sounded like a banshee wailing, and that banshee had a toothache and a temper on it. Best leave her to sleep, especially tonight with the storm well on its way overhead and his neck and shoulders stiff with pain and the trepidation that was surrounding him.

He closed his eyes once more, but knew he would not sleep.

He opened his eyes and lay motionless. Sweat still covered his body when he felt the first chill hit him. He was straining to hear now, every fibre of his being on red alert. Thunder clapped loudly overhead and a flash of lightning lit up the room. He slid quietly from bed and tiptoed across the wooden floor of the bedroom. The en-suite light was on and there was a crack of light coming from underneath the door. It was enough for him to see by.

Nick slipped out on to the landing.

The rain was heavier now; he could hear it surrounding the house.

He stopped dead as he heard the muffled movements once more. Someone was moving around downstairs. He could hear the sounds of drawers opening and closing. His heart was thundering in his chest, so loud he wondered if anyone else could hear it. He passed his sons’ bedrooms and was relieved to see that their doors were shut tight.

At the top of the staircase he paused and listened once more before descending the staircase as quietly as he could. At the bottom he felt inside the large umbrella pot and located the baseball bat he’d left there for just such an occasion as this.

The house was large, set in seven acres and not easily accessible. You gained entry through electric gates and you never turned up at the Learys’ without first letting them know you were coming.

He glanced around the entrance hall. There were three sets of double doors. These led to the large front room, the television room and dining room. Another staircase led down to the cellar and two more doors to the kitchen and study. Off the study was a well-stocked library. But it was the study that the noise was coming from.

It was inside the study that Nick kept his safe.

He crept across the entrance hall. His heart was in his mouth now. He swallowed with difficulty. The storm had quietened momentarily but was picking up in intensity once more. The wind was whistling round the house now and it was an eerie sound, a frightening sound, and God knew Nick was frightened. More frightened than he had ever been in his life before.

He thought of Tammy and the boys to stop the fear from making him turn back and run away.

The study door was open a crack. He looked through it, then pushed it further open. There was someone standing by the fireplace, his back to the door. He was wearing a ski mask and was dressed all in black. He was holding a weapon, a large hand gun, but it was dangling by his side.

He turned as Nick leaped across the room, raising the hand with the gun in it. Nick caught him with the baseball bat on the raised arm and heard the crunch of bone. The man crumpled to the floor and Nick hit him over and over again, on the head and the body, putting all his considerable strength behind the blows. This fucker was not getting up again, he would make sure of that. He was panting with exertion when he finally stopped.

In the dimness he saw that the intruder was still and breathed a sigh of relief. He turned to put on a lamp and then saw Tammy in the doorway, silent and terrified, the two boys standing to either side of her, their little faces white with fear and shock. Even in his terror at what he had done he noted how handsome they both were. He went over to them, dropping the bloody baseball bat as he ran, and gathered them up, all three of them, into his bear-like embrace.

He said it over and over like a mantra, his voice quavering with reaction to what he had just done, the violence of his attack. Then he ushered them from the room and across the entrance hall to the kitchen, turning on all the lights as he went. They needed light now.

The sudden glare made the boys squint and Nick smiled at them as best he could.

He hugged the two blond heads to him, felt their fear in the tremor of their narrow shoulders.