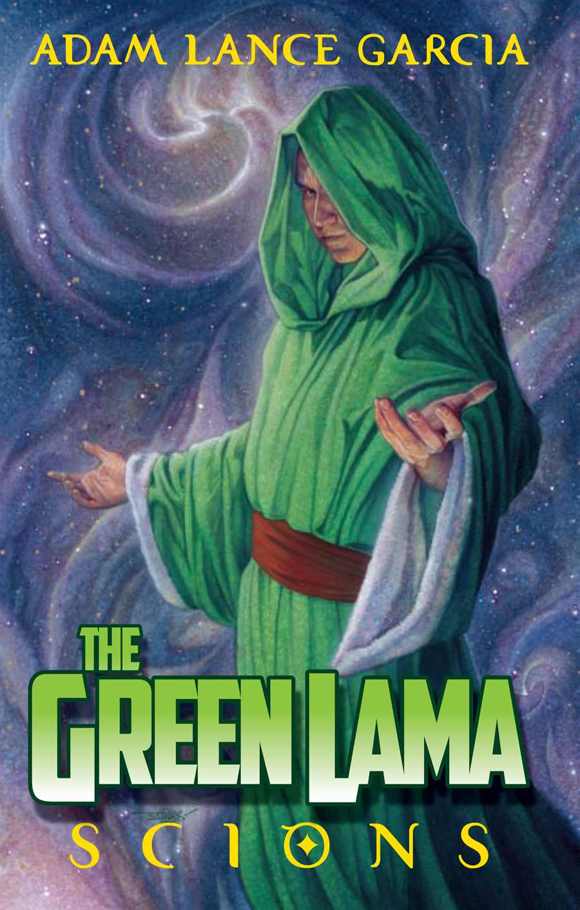 “For my Jean Farrell, Melissa Marie.”

The Green Lama™ is used by permission of Kendra Crossen Burroughs.

Visit us on the web at:
www.moonstonebooks.com

THE SHADOW OF TIBET

THE 1930s WERE dominated by pulp magazines. So named for their cheap paper, the pages between their luridly painted covers burst with tales of crime, adventure, and horror. Masked men battled evil, dolling out justice with highhanded morality and little regard for public safety. Much of what we now identify as superheroes—you may have heard of them—started within these pages of rip-roaring prose, formulaic plot, and minimal characterization.
The Shadow,
first born on the radio before making his way onto those cheap pulp pages, became a sensation. Amongst his litany of abilities,
The Shadow
could cloud men’s minds, a power learned from his studies in the mystical realm of Tibet.

Back then, Tibet was one of few remaining frontiers in the world and the public hungered for it.

James Hilton’s novel Lost Horizon flew off the shelves, and was soon adapted by Frank Capra into a film of the same name, introducing the world to the idea of Shangri-La. Meanwhile Theos Bernard, dubbing himself “the first white lama,” returned from his travels in Tibet to teach the world of Buddhism and the foreign concept of tannic yoga. Back then, the word “lama” had power, a term so strange, so foreign, it showed that there was still some magic left in the world.

It was within that world,
The Green Lama
was born.

In 1939, Kendell Foster Crossen was commissioned by the Munsey Publishing Company to create a new hero for their pulp magazine
Double Detective.
This hero would rival
The Shadow, The Spider,
and the other costumed vigilantes running amok on newsstands. Under the pseudonym “Richard Foster,” Crossen drew inspiration from various sources, and created not only one of the most unique heroes ever to grace prose, comics, and radio, but also the world’s first Buddhist hero.

Much like other pulp heroes of the time,
The Green Lama
had multiple secret identities and a massive supporting cast aiding him in his quest for justice. Unlike his many of contemporaries,
The Green Lama
eschewed guns in favor of radioactive salts, magic, and sleight of hand. He rarely, if ever, killed his enemies. His tales also had an advanced sense of continuity, with characters growing and changing over time, plot points introduced in one story paying off several tales later.

The Green Lama
is a character of contradictions, driven forward by a faith he constantly betrays. It makes him flawed and imperfect, and in that way, perhaps the most
human
of all pulp heroes. He epitomizes a lost era, when there was still wonder and mystery permeating the world, a time when there was still something fantastic to discover just over the horizon.

What you’re about to read is the first of many new
Green Lama
stories fully authorized by the Crossen Estate. These stories are meant to be a direct continuation of Crossen’s stories, at times taking place before, between, or after the original fourteen. But if you’re looking for a good place to start, you’ve found it here.

NEW YORK HARBOR was a mirrored surface. Pinpricks of city lights cut through the murky grey fog, twinkling like stars. It was beautiful in a way, Josh Reynolds thought. Not that Reynolds had an appreciation for beauty, at least not in the ways the poets described.

He chewed on the remains of his cigar, enjoying the bitter taste dancing over his tongue. Beauty sat between a girl’s thighs. Especially when she was screaming and fighting, so he had to earn it. He leaned forward and watched the bow of the rowboat cut through the icy water. In the distance, he could hear the mournful sound of a foghorn echo out like a dying whale, making him smile. It was a good night for nasty business.

“Bad night tonight, Wilfred. Dark as hell and thick like chowder,” he said to the boy working the rows. Wilfred Roth was the wiry sort of kid who grew up mean in the narrow alleyways of the city. He was no more than sixteen but looked twice that. Dark black pits sat beneath his eyes, a switchblade in his pocket. Reynolds liked him.

Between them lay the concrete covered form of ol’ Drew Salmon, a small divot indicating where his mouth had been. Reynolds could still hear the screams, made him think of boiling lobsters. “Didn’t know when to keep his mouth shut, our friend Drew. Pity the boss had to kill him like that.”

Wilfred sucked his teeth. “Poor ol’ Drew,” he said with more than a bit of sarcasm.

“Always better to keep your mouth shut and be thought an idiot than to get shot in the face,” Reynolds ruminated, unconsciously using his tongue to pick the tobacco leaves from between his teeth. “That’s my motto, at least.”

Wilfred rolled his sunken eyes. “Coulda fooled me,” he said under his breath.

“Aye!” Reynolds shouted, spitting a wad of leaves into the river. “Let Drew be a lesson for you about smart talk, boy-o.” He kicked Drew’s cemented corpse with the toe of his boot to underline his point. Without waiting for a response, he stood up and tried to wave away the fog. “Look at this soup, thick enough to cut with a knife. Betcha that Buddhist Bastard could stand right in front of us and not know we were here … so long as we’re quiet, so keep your mouth shut.”

Reynolds had been working this town a long time, before the Feds went about busting liquor barrels, before Tommy guns became the mobster’s weapon of choice and long before men started wearing masks like it was Halloween. At first he thought the vigilantes were a lark, the kind of thing idiots did to make the papers. But like most bad ideas, it caught on quickly and spread like wildfire. Most were nutcases in domino masks, freaks who went about killing anything that moved, thinking that would somehow bring an end to crime, never figuring that vacuums were the sort of thing that always found a way of getting filled. But then there was the Green Lama, who— despite his ridiculous name—lived in the shadows, systemically working his way through the underworld, leaving destruction in his wake without ever taking a life. They had a lot of names for him in the papers—the Verdant Avenger, the Mysterious Man of Strength—but Reynolds had always been partial to “Buddhist Bastard.” No one had ever seen his face or, at the very least, the
same
face. Seemed like everyone had a different story. The Green Lama was white, he was Negro, he was Oriental, he was old, and he was young. You could fill a room of witnesses and no two would describe the same person.

Reynolds, for his part, had only seen the Green Lama once, when a robbery went sour. A bomb had gone off early, and before the cops could begin to surround the building, the shadows came alive, taking out every member of the gang one-by-one. Reynolds had sprayed bullets left and right when he felt a small electrical shock at the base of his skull and his whole body turned to pudding. He dropped to the ground, unable to move, as the Green Lama dressed in a hooded robe, a red
kata
scarf wrapped around his waist, ran past, his fists subtly glowing like emeralds. A warm stream of urine ran down Reynolds’s leg and hours passed before he could move again.

He brushed away the memory as best he could and turned back to the dirty task at hand. He checked his watch, just shy often o’ clock and a long way until the sun would swing through the sky. “All right, we’re out far enough,” he said, chucking the remains of his cigar into the water. “Let’s put good ol’ Drew out to sleep.”

Wilfred brought in the oars and tried unsuccessfully to lift Drew’s corpse off the bottom of the boat. “Did we have to cover him in concrete?” he grunted. “He weighs a goddamn ton!”

“Only way to make sure he sinks, kiddo,” Reynolds replied as he helped lift. In truth, their boss Pete Barry just liked to make rats suffer as much as possible. Reynolds would never forget what the boss did to Johnny Lombardo and all the blood that came with it.

The boat rocked violently as they threw Drew’s mortal remains over the side. They watched the stone body quickly sink down, ripples the only evidence of its existence.

Reynolds ran his sleeve over his brow, missing the time when this sort of work didn’t leave him breathless. “So long, ol’ Drew,” Reynolds said, spitting a wad of phlegm. “And good riddance.” He clapped Wilfred on the back. “Good job there, son. Cleaned the mess real good. We’ve earned the rest of the night off, dontcha think?”

Wilfred nodded. He silently fell back to his seat, watching the vacant space Drew’s cemented carcass had previously occupied.

Reynolds sat down. Fishing into his pockets, he found his matchbook and a single bent cigar, tobacco flakes crumbling off the end. “Let’s head home to the city we love,” he said as he went to light his stogie, “find us some nice young ladies to sing us some moaning melodies. Work the oars, son, ain’t getting any earlier.”

Something smacked against the bow of the boat, a loud thunk that jostled the lit match from Reynolds’s hand and onto his lap. “Jesus, Mary and Joseph,” he cursed, brushing off the smoldering stick. He sucked on his thumb and placed it over the hole in his pant leg, hissing at the pain. “Damn, damn, damn. The Hell was that?”

Wilfred leaned over the side and urgently waved Reynolds over, his lips pinched so thin they had turned white.

“Wouldya just tell me,” Reynolds groused, disappointed in himself at ruining yet another pair of pants.

“You’re gonna wanna see this,” Wilfred said as calmly as he could manage.

Reynolds begrudgingly looked over the side and felt ice water drip down his spine. Floating alongside the boat was the body of a young woman, her head ripped asymmetrically in half. Bits of brain and blood drifted out from the cavity, mixing with the water to create a crimson and grey stew. Reynolds went to cover his mouth but couldn’t prevent himself from throwing up all over the deck.

“Christ on the cross,” he whispered, spitting out the last of the vomit, wiping his grizzled chin clean with the heel of his hand. He had seen and done some terrible things in his time, stuff that would make a priest stop believing, but this tore him open.

“What the hell could do that?” Wilfred asked as if Reynolds had the answers.

“Someone sees us with her, they’re gonna think it was us. Bad enough we had ol’ Drew; a murdered broad is a helluva a lot worse.” Wilfred grabbed the oars and started rowing furiously, twice inadvertently smacking the corpse, spreading strawberry colored jam over the paddle. “I’m not getting pinched for somethin’ like this!”