Read The Guest & the Change Online

The Guest & the Change 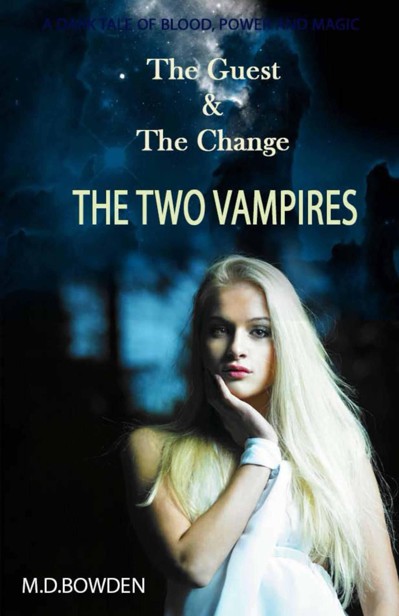 The
Guest
&
The
Change

M.D. BOWDEN has asserted her moral rights to be identified as author of this book.

No part of this book may be reproduced without prior permission in writing from the author.

All characters in this book are fictitious.  Any resemblance to real persons, living or
dead,
is entirely coincidental.

To my partner and children for putting up with hours spent writing!

Also to all the writers who have inspired me.

Jo stepped out the front door.

He found himself momentarily dazzled by a bright violet sky as the sun appeared from behind fuzzy clouds.

Glimpsing a flash of dark, he turned towards it, his heart racing.

He was met by a searing pain as fangs sank into his exposed neck.

When he awoke he found himself lying on his living room floor, on the pink spotted rug Sarah had bought for his girls.

The curtains were drawn; a little light peaked through casting shadows across the room.

Jo’s head spun as he pulled himself up onto the black leather sofa and reached for the reading light.

He wasn’t scared, he was confused.

What the hell just happened?

As he clicked the light switch the room illuminated.

Nothing looked odd; it was the same
room he and his family had lived in for 5 years.

Toys over flowed from the toy box, books and DVDs were crammed onto bookshelves.

Looking towards the clock he saw it was 7 ‘o’ clock, time to go to his sisters.

She had called earlier and invited him over for dinner.

Jo’s wife and kids were out visiting the parents in law, so he had the house to himself.

Jo reached for his neck.

Tentatively standing up, he walked across the room to the large ornate mirror above the fireplace.

No bite marks. - Just the beginnings of stubble around his jaw.

He did look a little haggard.

His short, dark hair was messy, probably from lying on the floor.

His eyes, normally deep brown and clear, looked bloodshot and were shadowed.

He took a deep breath and put his fingers on the mantel piece as he looked into tired eyes.

He remembered bright light dazzling him.

The sun must have been about to set behind the scruffy conifers lining the horizon.

Something undefined had approached him.

He hadn’t even seen what it was.

But he had felt two dangerously sharp points pierce his neck.

And, at the time, he had known they were fangs.

That would explain why he hadn’t seen anything clearly.

But if he’d stepped out the front door
and been bitten by a vampire, what was he now doing on the living room floor?

Why was he ok, or pretty much ok?

Why were there no bite marks?

More to the point, why was he not dead?

Jo had heard of vampires.

He had read about them.

Everybody had read about them.

He knew people said they were real.

He had even heard reports of killings in the area.

There had been speculation.

There was always speculation.

But he had never seen a vampire.

Neither had anyone else he knew.

Plus, there was no actual evidence for vampires.

He continued to peer at himself in the mirror.

Did I get bitten by a vampire?

And if I did, how did I end up unconscious on the floor?

Is it possible the vampire bit me,
then
healed me?

Jo had heard this was possible.

But why would a vampire do this, and why wouldn’t it take away his memory of the bite?

If he had been healed by vampire blood it would mean that, if he died now, he himself would turn into a vampire.

He felt a sickening feeling creeping up his body, into his throat.

Of course, there was no reason for him to die now.

He would probably be fine.

But then, if he had been bitten by a vampire, and been healed, could he unknowingly be part of some bigger plan?

What if the vampire planned for him to die?

Shit, what if he was already dead?

Jo’s breathing quickened, what was wrong with him?

He was getting
so carried away.

Taking a deep breath he tried to pull himself together.

Ok, think logically, he told himself
.


It’s ridiculous to think that I was bitten by a vampire.

There must be another explanation.

I was on the living room floor.

I remember I was going to my sisters.

She’s going to be pretty annoyed when I’m late.

I wouldn’t have taken a nap on the floor.

I must have passed out.

There must be something wrong with me, that’s why I look so pasty and drawn out.

Maybe I should be headed for the hospital right now?

But I feel OK.

If I’d passed out I may have dreamt the whole thing.

I may have hallucinated that I actually left the house, and the reports of deaths may have triggered the vision of a vampire.

Jo thought about this.

This explanation did seem more likely.

Not that he’d ever passed out before, but these things did happen.

Maybe he should stick his head out the door and check, he thought.

Regardless of his new explanation, his pulse still quickened.

What if there really was a vampire out there?

God, he was becoming completely deluded.

Taking another deep breath, he strode out of the room, down the dimly lit hall, into the white bathroom.

He splashed his face with ice cold water and dried himself on a soft white towel from the rack.

He took another deep breath, preparing himself for action.

Jo grabbed his jacket and put on a scarf; not much
protection from vampires, but it would protect him from the cold at least.

He picked his keys off the hook and headed for the door.

Sarah pulled up at her parents’ house.

Bea and Megan were chattering in the back.

Me out first,’ they argued.

Megan, the oldest, undid her own straps and pushed out first, as soon as Sarah opened the door.

They owned a typical people wagon.

Lots of space, lots of mess.

Sarah stuck her foot in the foot well and leant in to unstrap Bea.

Bea pulled out her little arms and Sarah gave her a quick hug before letting her climb down on her own.

Megan had already run off ahead and was pounding on the door.

‘Grandma, Granddad, we’re here!’ she shouted, before they’d even had time to open it.

Sarah looked up and walked up the steps holding Bea’s hand.

The door opened to Grandma and Granddad with big smiles.

Megan immediately threw herself at their legs in a big hug.

As Sarah and Bea reached them they exchanged greetings and Grandma lifted up Bea, giving her a hug, while her Granddad ruffled her hair and gave her a kiss.

‘We have company,’ she said.

Sarah raised her eyebrows at her mother, wondering about her tone of excitement, her secret whispers.

Who could this man be?

And why was her mother flustered?

Feeling a little nervous, the familiarity of the situation gone with the addition of a guest, Sarah walked through the
cozy
living room, where welcoming sofas and a warm live fire tempted her, into the kitchen.

Her mother was at the stove, Bea on her hip.

Leaning against the worktop, glass of wine in
hand,
was the unfamiliar guest.

His eyes, warm and dark with long eyelashes.

His jaw, rugged and defined.

Sarah quickly looked away from those, feeling her cheeks redden.

Dark hair falling around his eyes.

Her blush deepened and she tried not to look too shy as her father came in and introduced them.

‘This is my daughter, Sarah, and her two children, Megan and Bea.’

Megan had followed her Granddad in but she was staying close to his legs, unsure of the intimidating new man.


And he looks
powerful,
I bet he’s quite muscular under that shirt and leather jacket.

Dressed entirely in black too, that definitely adds to his mystique.

Feeling guilty she smiled at the man.

Then, as he smiled back, her heart skipped.


This is not happening.

‘And this is Daniel,’ he continued.

Daniel put down his glass and stepped forward, holding out his hand.

As Sarah took it a shock, like electricity, went up her arm.

She felt the urge to pull away, surprised at her reaction.

But his eyes and his smile held her in place.

When he let her go she stepped back and turned away to pour herself some wine, to get her breath, and to not let her parents see her reaction.

Her mother sent her a knowing look though, which just made Sarah’s cheeks feel even hotter.

‘Daniel has just moved here, he’s staying in The Woodman - that old hotel just out of town, till he can get a place.’

Sarah took a gulp of wine before speaking, ‘So, how did you meet my father?’

Daniel looked at her steadily but Sarah couldn’t maintain his gaze.

Feeling like a silly teenager she kept looking away and had to remember to breathe.

‘I just started working at his office,’ he replied in a smooth southern drawl, ‘selling the cabins in the woods.’

This sounded like an entirely ordinary thing to say, it was almost unbelievable. - How could someone with such an extraordinary presence do something so ordinary?

As her father started talking about work Sarah helped her mom, Alice.

Alice had made a chicken casserole; Sarah lifted the lid and it smelt delicious.

She opened the oven to check the potatoes.

They were done and just keeping warm, so she busied herself with setting the table.

Alice had gone into the living room to entertain Megan and Bea.

They were pulling numerous toys and games off the shelves onto the wooden floor and being very noisy - as per usual.