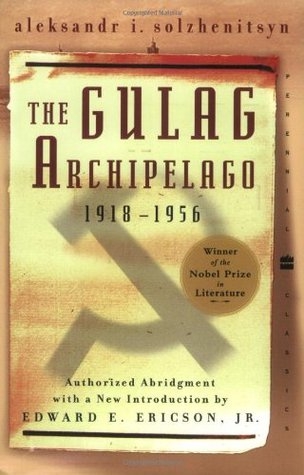 THE GULAG ARCHIPELAGO
AN EXPERIMENT IN LITERARY INVESTIGATION
SOLZHENITSYN

I dedicate this
to all those who did not live
to tell it.
And may they please forgive me
for not having seen it all
nor remembered it all,
for not having divined all of it.

For years I have with reluctant heart withheld from publication this already completed book: my obligation to those still living outweighed my obligation to the dead. But now that State Security has seized the book anyway, I have no alternative but to publish it immediately.

In this book there are no fictitious persons, nor fictitious events. People and places are named with their own names. If they are identified by initials instead of names, it is for personal considerations. If they are not named at all, it is only because human memory has failed to preserve their names. But it all took place just as it is here described.

PART I
The Prison Industry

"In the period of dictatorship, surrounded on all sides by enemies, we sometimes manifested unnecessary leniency and unnecessary softheartedness."

KRYLENKO,
speech at the Promparty trial
1. Arrest
2. The History of Our Sewage Disposal System
3. The Interrogation
4. The Bluecaps
5. First Cell, First Love
6. That Spring
7. In the Engine Room
8. The Law as a Child
9. The Law Becomes a Man
10. The Law Matures
11. The Supreme Measure
12. Tyurzak
PART II
Perpetual Motion

1. The Ships of the Archipelago
2. The Ports of the Archipelago
3. The Slave Caravans
4. From Island to Island
Translator's Notes
Glossary:
Names
Institutions and Terms
ILLUSTRATIONS
Aleksandr Isayevich Solzhenitsyn In the army
In detention After his release from camp

In 1949 some friends and I came upon a noteworthy news item in
Nature
, a magazine of the Academy of Sciences. It reported in tiny type that in the course of excavations on the Kolyma River a subterranean ice lens had been discovered which was actually a frozen stream—and in it were found frozen specimens of prehistoric fauna some tens of thousands of years old. Whether fish or salamander, these were preserved in so fresh a state, the scientific correspondent reported, that those present immediately broke open the ice encasing the specimens and devoured them
with relish
on the spot.

The magazine no doubt astonished its small audience with the news of how successfully the flesh of fish could be kept fresh in a frozen state. But few, indeed, among its readers were able to decipher the genuine and heroic meaning of this incautious report.

As for us, however—we understood instantly. We could picture the entire scene right down to the smallest details: how those present broke up the ice in frenzied haste; how, flouting the higher claims of ichthyology and elbowing each other to be first, they tore off chunks of the prehistoric flesh and hauled them over to the bonfire to thaw them out and bolt them down.

We understood because we ourselves were the same kind of people as
those present
at that event. We, too, were from that powerful tribe of
zeks
, unique on the face of the earth, the only people who could devour prehistoric salamander
with relish
.

And the Kolyma was the greatest and most famous island, the pole of ferocity of that amazing country of
Gulag
which, though scattered in an Archipelago geographically, was, in the psychological sense, fused into a continent—an almost invisible, almost imperceptible country inhabited by the zek people.

And this Archipelago crisscrossed and patterned that other country within which it was located, like a gigantic patchwork, cutting into its cities, hovering over its streets. Yet there were many who did not even guess at its presence and many, many others who had heard something vague. And only those who had been there knew the whole truth.

But, as though stricken dumb on the islands of the Archipelago, they kept their silence.

By an unexpected turn of our history, a bit of the truth, an insignificant part of the whole, was allowed out in the open. But those same hands which once screwed tight our handcuffs now hold out their palms in reconciliation: "No, don't! Don't dig up the past! Dwell on the past and you'll lose an eye."

But the proverb goes on to say: "Forget the past and you'll lose both eyes."

Decades go by, and the scars and sores of the past are healing over for good. In the course of this period some of the islands of the Archipelago have shuddered and dissolved and the polar sea of oblivion rolls over them. And someday in the future, this Archipelago, its air, and the bones of its inhabitants, frozen in a lens of ice, will be discovered by our descendants like some improbable salamander.

I have absorbed into myself my own eleven years there not as something shameful nor as a nightmare to be cursed: I have come almost to love that monstrous world, and now, by a happy turn of events, I have also been entrusted with many recent reports and letters. So perhaps I shall be able to give some account of the bones and flesh of that salamander—which, incidentally, is still alive.

This book could never have been created by one person alone. In addition to what I myself was able to take away from the Archipelago—on the skin of my back, and with my eyes and ears—material for this book was given me in reports, memoirs, and letters by 227 witnesses, whose names were to have been listed here.

What I here express to them is not personal gratitude, because this is our common, collective monument to all those who were tortured and murdered.

From among them I would like to single out in particular those who worked hard to help me obtain supporting bibliographical material from books to be found in contemporary libraries or from books long since removed from libraries and destroyed; great persistence was often required to find even one copy which had been preserved. Even more would I like to pay tribute to those who helped me keep this manuscript concealed in difficult periods and then to have it copied.

But the time has not yet come when I dare name them.

The old Solovetsky Islands prisoner Dmitri Petrovich Vitkovsky was to have been editor of this book. But his half a lifetime spent
there
—indeed, his own camp memoirs are entitled "Half a Lifetime"—resulted in untimely paralysis, and it was not until after he had already been deprived of the gift of speech that he was able to read several completed chapters only and see for himself that everything
will be told
.

And if freedom still does not dawn on my country for a long time to come, then the very reading and handing on of this book will be very dangerous, so that I am bound to salute future readers as well—on behalf of
those
who have perished.

When I began to write this book in 1958, I knew of no memoirs nor works of literature dealing with the camps. During my years of work before 1967 I gradually became acquainted with the
Kolyma Stories
of Varlam Shalamov and the memoirs of Dmitri Vitkovsky, Y. Ginzburg, and O. Adamova-Sliozberg, to which I refer in the course of my narrative as literary facts known to all (as indeed they someday shall be).

Despite their intent and against their will, certain persons provided invaluable material for this book and helped preserve many important facts and statistics as well as the very air they breathed: M. I. Sudrabs-Latsis, N. V. Krylenko, the Chief State Prosecutor for many years, his heir A. Y. Vyshinsky, and those jurists who were his accomplices, among whom one must single out in particular I. L. Averbakh.

Material for this book was also provided by
thirty-six
Soviet writers, headed by
Maxim Gorky
, authors of the disgraceful book on the White Sea Canal, which was the first in Russian literature to glorify slave labor.

How do people get to this clandestine Archipelago? Hour by hour planes fly there, ships steer their course there, and trains thunder off to it—but all with nary a mark on them to tell of their destination. And at ticket windows or at travel bureaus for Soviet or foreign tourists the employees would be astounded if you were to ask for a ticket to go there. They know nothing and they've never heard of the Archipelago as a whole or of any one of its innumerable islands.

Those who go to the Archipelago to administer it get there via the training schools of the Ministry of Internal Affairs.

Those who go there to be guards are conscripted via the military conscription centers.

And those who, like you and me, dear reader, go there to die, must get there solely and compulsorily via arrest.

Arrest! Need it be said that it is a breaking point in your life, a bolt of lightning which has scored a direct hit on you? That it is an unassimilable spiritual earthquake not every person can cope with, as a result of which people often slip into insanity?

The Universe has as many different centers as there are living beings in it. Each of us is a center of the Universe, and that Universe is shattered when they hiss at you:
"You are under arrest."

If
you
are arrested, can anything else remain unshattered by this cataclysm?

But the darkened mind is incapable of embracing these displacements in our universe, and both the most sophisticated and the veriest simpleton among us, drawing on all life's experience, can gasp out only: "Me? What for?"

And this is a question which, though repeated millions and millions of times before, has yet to receive an answer.

Arrest is an instantaneous, shattering thrust, expulsion, somersault from one state into another.

We have been happily borne—or perhaps have unhappily dragged our weary way—down the long and crooked streets of our lives, past all kinds of walls and fences made of rotting wood, rammed earth, brick, concrete, iron railings. We have never given a thought to what lies behind them. We have never tried to penetrate them with our vision or our understanding. But there is where the
Gulag
country begins, right next to us, two yards away from us. In addition, we have failed to notice an enormous number of closely fitted, well-disguised doors and gates in these fences. All those gates were prepared for us, every last one! And all of a sudden the fateful gate swings quickly open, and four white male hands, unaccustomed to physical labor but nonetheless strong and tenacious, grab us by the leg, arm, collar, cap, ear, and drag us in like a sack, and the gate behind us, the gate to our past life, is slammed shut once and for all.

That's all there is to it! You are arrested!

And you'll find nothing better to respond with than a lamblike bleat: "Me? What for?"

That's what arrest is: it's a blinding flash and a blow which shifts the present instantly into the past and the impossible into omnipotent actuality.

Except that in your desperation the fake circus moon will blink at you: "It's a mistake! They'll set things right!"

And everything which is by now comprised in the traditional, even literary, image of an arrest will pile up and take shape, not in your own disordered memory, but in what your family and your neighbors in your apartment remember: The sharp night-time ring or the rude knock at the door. The insolent entrance of the unwiped jackboots of the unsleeping State Security operatives. The frightened and cowed civilian witness at their backs. (And what function does this civilian witness serve? The victim doesn't even dare think about it and the operatives don't remember, but that's what the regulations call for, and so he has to sit there all night long and sign in the morning.