Read The Hand that Rocks the Ladle Online

The Hand that Rocks the Ladle 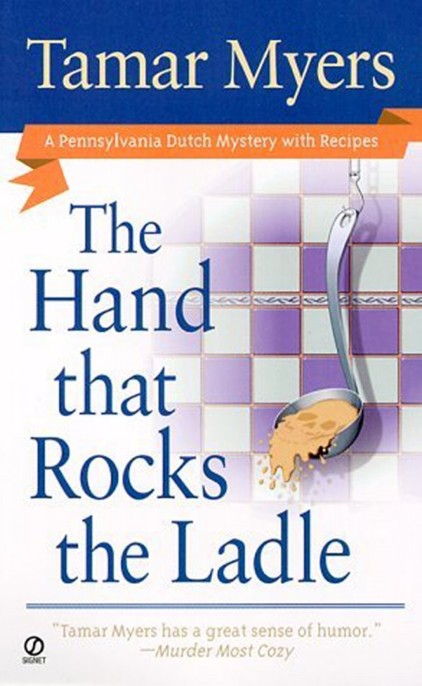 THE HAND THAT ROCKS THE LADLE

A PENNSYLVANIA DUTCH MYSTERY WITH RECIPES

First published by Signet, an imprint of New American Library, a division of Penguin Putnam Inc.

THE HAND THAT ROCKS THE LADLE

Amish men rarely get pregnant. Elderly Amish men almost never do. Mose Hostetler, however, seemed to be the exception.

When Freni first told me the news, I had to stifle my impulse to laugh. “What do you mean Mose is going to have a baby?”

“Not just one baby, Magdalena, but three. My Mose is going to have triplets.”

Freni Hostetler, Mose’s wife, flapped her arms like a rooster about to crow. “Yah, Barbara is having triplets, but so is my Mose. I could feel the babies—all three of them.”

She clutched her own apron-clad abdomen. “Here. I could feel them kick.”

I rolled my eyes and prayed for patience. I also promised myself I wouldn’t worry needlessly about my cook and her husband.

That was three months ago, and my eyes had put on more miles than a roller derby. As for the patience, it never did come. How can one be patient with a seventy-three-year-old man who claims to have morning sickness? All that talk about hemorrhoids and constipation was enough to put me off my feed. I must have lost ten pounds, while the grandfather-to-be gained twenty. Thank heavens Amish law forbids men to dress in women’s clothes; Mose in a maternity smock is a sight these eyes never want to see. And of course I worried.

I couldn’t help worrying about Freni and Mose. Ever since my parents’ tragic death eleven years ago in a tunnel—squished between a milk tanker and a semi loaded to the gills with state-of-the-art running shoes—the two have been like parents to me. Who knows, by some strange genetic quirk, they might even be my parents. You see, the Hostetlers are Amish, and I am a Mennonite of Amish descent. Our families have been intermarrying for hundreds of years. Mose and Freni are distant cousins to each other, as well as to me. It would take a professional genealogist to sort out our exact relationships. Suffice it to say, our bloodlines are so tangled that I am, in fact, my own cousin. If I’m in the mood for a family picnic, all I need to do is make a sandwich.

But a body can do only so much worrying, and as the months dragged by, I threw myself into my work like never before. I am the owner and proprietress of the PennDutch Inn in the sleepy little hamlet of Hernia, Pennsylvania. It has been said, by others than myself, that mine is the finest full-board inn west of the Alleghenies. I like to think that is because of my personal touch, and because of A.L.P.O.

“A.L.P.O.,” I said to my new guest, “stands for Amish Lifestyle Plan Option. For an extra twenty dollars a day I’ll let you make your own bed and clean your own room. For an extra thirty dollars you get to help in the kitchen.”

The guest stared at me from beneath eyebrows the size of feather dusters. For the record, I have never seen eyes that pale. They were gray, but so thinly pigmented that a myriad of veins showed through, causing the impression of pink.

“Surely you jest,” he said.

“Not at all. It says here on your registration form that you’re here to study the Amish. What better way than to immerse yourself in their way of life.”

“What better way for you to enrich your coffer.” Coffer? I glanced at the form again. Ah, yes, the man was a professor of sociology. That would explain the somewhat shabby suit, the snagged polyester tie, and the extravagant vocabulary.

I sighed. There is no point in trying to fleece an academic—not that I would try to do such a thing mind you. I am a good Christian woman, after all. What I mean is, in my experience, educators tend to be as tightfisted as dead boxers. Of course it is because they are underpaid. I understand that. Still, I would be lucky if I didn’t end up owing him at the end of his stay.

“Of course I see it,” I said pleasantly. “What about it?”

Watery eyes regarded me unwaveringly. “I must insist that you address me as Dr. Barnes.”

I smiled. “I must insist that you address me as Proprietress.”

Feather-duster eyebrows converged into one enormous thicket. “Just show me to my room, Proprietress.” I led him up the impossibly steep stairs to the guest rooms. (Yes, I do have an elevator, but why waste electricity?) If pressed, I will admit that for one split second I had the wicked urge to give him a slight push backward with the heel of my foot. Of course I wouldn’t really do such a thing. A woman guest already met her demise at the base of those stairs, and let me tell you this, there is nothing that can be done about a dent in a hardwood floor.

But I digress. The point is, my guest lineup for that first week of October had not gotten off to a good start. And either I was coming down with a touch of arthritis, or I could feel trouble in my bones. It was not going to be a good week.

Perhaps I should introduce myself. My full name is Magdalena Portulaca Yoder. I stand five feet ten in my bare feet, have been accused of being thin, and have a negative chest profile. I have a large head, and unkind people have suggested that my elongated proboscis would make a good cheese-cutting implement. As stated before, I am an orphan—albeit a middle-aged orphan. I have one sister, Susannah Yoder Entwhistle Stoltzfus, and since I don’t count the miniature dog she carries around in her bra as blood kin, I have no nephews (a fact she disputes). I would describe myself as fair-minded and reasonably tolerant of other folks’ proclivities.

Thank heavens, however, my next two guests were as down to earth as plowshares. Hailing from Indiana, the Redigers were perhaps in their mid-thirties, and the epitome of wholesomeness. Neither had any extraneous initials attached to their name, and they listed their occupations as carpenter and housewife respectively. Donald was clean-cut, neatly dressed in khaki slacks and blue, long-sleeved chambray shirt. Gloria wore a dress that properly covered her knees. Her brown braids were swept back and piled in a bun.

“Ah, fellow Mennonites,” I said, unable to suppress a smile.

“But there doesn’t seem to be much,” Gloria said. It was a simple statement of fact, not a complaint.

I shook my oversized noggin. “I’m sorry, folks, but we’ve had a dry summer and, well, to tell you the truth, you’re about ten days too early. Mid-October though, the mountainsides should be a blaze of color. I don’t suppose you’d care to stay until then.”

Gloria shook her plain, but pretty head. Although she lacked a prayer cap—many modern Mennonites go without these days—the thick brown braids, gathered in back and held neatly in place with a myriad of simple hairpins, were a dead giveaway that she was of my faith.

“I’m afraid a week is all we can afford,” she said softly. Her Hoosier accent was barely noticeable.

I thought fast. I really didn’t need the money. My inn has done very well over the years, and despite a president with zipper problems, the economy has been good to me as well.

“Tell you what, dears, I just happen to have a special plan called A.L.P.O.—Amish Liberals Partly Off. That’s you. You’re Mennonites, which is sort of like being liberal Amish, so you get partly off. Provided you clean your own rooms, of course.”

The Redigers exchanged anxious glances. “Is that legal?” Donald asked.

“How much off?” Gloria asked.

I strode casually from behind the check-in counter and peeked surreptitiously at her shoes. They were obviously not genuine leather, and had seen much better days.

“Half off. That way you can stay the whole two weeks for the price of one.”

The Redigers beamed, which in turn brought a smile to my face. I really do like it when my guests are happy. As to any accusations that I had just shown partiality—well, I did. And so be it. We all show partiality at some time or another. Anyone who disagrees with that is not being totally honest, and to me that’s a lot worse sin than showing favoritism. Even the Good Lord had a favorite disciple, for crying out loud. “God bless you,” Donald cried.

“You are so kind,” Gloria said. “Half off! It is truly an answer to prayer.”

I put a slender finger to my lips. “Shhh. The English will hear you.”

By that I meant the pompous professor. The Amish, and some of the stricter Mennonites, refer to those outside the tradition as English. It is an appellation that has nothing to do with origin. Indeed, the Japanese are every bit as English to the Amish as are Londoners. In other words, English is our word for goyim.

The Redigers knew exactly what I meant. They nodded their heads, and Gloria giggled nervously. I felt almost ebullient. It had been a long time since I’d had Mennonite guests—okay, to be truthful, these were my first Mennonite guests. Please understand, however, that we Mennonites are a simple people and not given to gallivanting needlessly around the country. At any rate, the ache in my bones that commenced with Professor Barnes’s appearance was gone. Things were looking up again.

No sooner had I shown the grateful Redigers to their rooms when two real English guests showed up. Daphne and Edwina Moregold had written ahead from their home in Manchester, England, so they were expected. And since I have had real English guests before, I expected there would be some difficulty in communication (I shall hereby translate everything the Moregold sisters said for your edification). What I didn’t expect was a pair of identical twins.