Read The Hand that Trembles Online

The Hand that Trembles 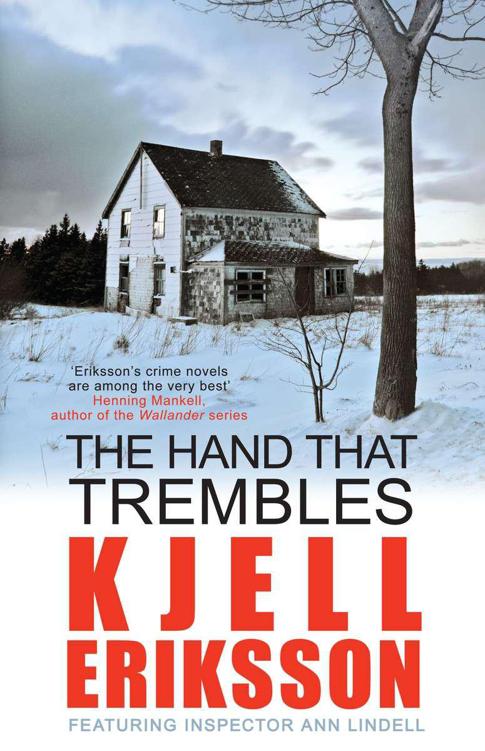 THE HAND THAT
TREMBLES

Translated from the Swedish by Ebba Segerberg

The Hand that Trembles
December 1956

He had been sent to get more firewood. His mission was of the utmost importance. It was bitingly cold; the snow in the garden sparkled and smoke rose like a grey-white genie above the cottage tucked in the hollow.

Suddenly a shadow darkened the bark-and sawdust-covered earthen floor. Sven-Arne had just added a split log to the others he carried in his arms. The piece wobbled, then slid out of his grasp along with most of the rest of the load.

‘Shall we do it together?’

‘Did I frighten you?’

He shook his head, too annoyed to say anything. Ante stepped into the shed and looked around at the stacked wood.

‘Well, someone’s been busy,’ he said, and smiled unexpectedly.

He bent down and grasped a couple of logs.

‘Hold out your arms,’ he said, and Sven-Arne obeyed.

Sven-Arne wiggled his knees back and forth. If he came in with this big of a load he would be praised. He wanted to hurry out of the woodshed and back to the cottage, but his uncle stood in the way.

‘I remember the winters during the war. We burnt a lot of wood back in those days.’

‘That one was hotter than hell.’

Sven-Arne was getting cold. He misjudged shifting his weight, and stumbled slightly.

‘I’ll tell you about it sometime,’ Ante said.

He was missing two fingers on his left hand. Emil had once mumbled something about how it was Ante’s carelessness that had been the cause, but no one really wanted to talk about Ante’s war adventures, not even Ante himself. That was why his comment about how he would tell him about it one day was a little out of the ordinary.

‘You seem to have your head screwed on right. Olars doesn’t understand anything.’

Ola Persson was Sven-Arne’s cousin, older by ten years. He was having a cup of coffee inside the cottage. He was a dynamite expert and smelt funny, even when he changed into his nice clothes. Ante insisted on calling him Olars.

Sven-Arne’s arms were aching, but his irritation vanished at the moment that his uncle criticised his cousin.

He couldn’t help staring at Ante’s left hand as it searched for suitable pieces of wood. He stretched right and left, and after a while his arms were full.

‘Head back together when we’re done?’

Sven-Arne nodded. He tried to shift the weight of the wood, get it closer to his chest.

‘We’ll take only birch,’ Ante decided, and tightened his right arm around his load.

When they were done, they could hear the tinkling of bells and shortly thereafter the muted thuds of hooves against the deeply rutted gravel road.

‘That’s Rosberg,’ said Ante, who had a curious way of tilting his head as he listened.

They left the woodshed. The sun blinded his eyes. Sven-Arne caught a glimpse of his grandmother’s neighbour behind the lilac bushes. Rosberg was sitting on the load of timber with his hat jauntily askew and holding the reins as if he were driving a four-horse hitch.

His horse, an unusually light-coloured Ardennes by the name of Lightning, shook its head as it passed the cottage. Maybe it disliked the smell of smoke, or else it was just anxious, very conscious of its proximity to the barn.

Sven-Arne was still cold, but enjoying it. The cottage stood out more clearly than usual in the afternoon sun. The snow was piled all the way under the windows, the chimney almost as crooked as the house, but the sun made it gleam red-brown. Sven-Arne repressed a laugh.

The tinkling from Rosberg’s sled died away. A flock of bullfinches fluttered about the Swedish Whitebeam tree in the middle of the garden. A swing still hung from the lowest branch. Now it was topped with a white cap like a chef’s hat. He had to admit that he still loved to swing back and forth with the great Whitebeam tree above him like a protecting giant. No rain could penetrate it. In the wind, it simply turned up its leaves and showed the
silver-fuzzy
underside. In the spring, it was covered in white flowers, and in the autumn there were clusters of berries, some years so heavy that the colour could be seen from far away. Sometimes his grandmother brought in clusters and laid them in a bowl of water. She maintained that her grandfather had planted the tree, even though most people did not believe it was that old.

‘That Lightning, he was also in the war,’ Ante said, and Sven-Arne was suddenly unsure which war he was referring to.

‘The only ones they get are horses and idiots.’

They walked back to the house, Ante in the lead. It was only three degrees Fahrenheit. Ante spat in the snow, smiled at Sven-Arne, and pushed open the door.

‘Damned excruciating,’ he said, and stepped into the hall.

Sven-Arne assumed he meant the cold. Or else he meant being in Grandmother’s kitchen.

Even though she had built a fire in the parlour, it was too cold in there and so everyone had crowded into the kitchen. Sven-Arne’s parents, Erik and Lisbeth, were there, as was Uncle Emil and his sons Ola and Tommy. Their mother was in the hospital, but no one talked about that. She had weak nerves.

Grandmother’s brother Edvin and his two unmarried daughters were sitting by the window. Majvor – large as a house, who breathed laboriously and liked to complain about everything and everyone – and Inga-Lisa, always on her way up to assist Grandmother Agnes but who was trapped between Edvin and Majvor so she remained seated. Both sisters were active members of the society ‘Friends of Jerusalem’ and considered a bit quirky, but tolerated.

A neighbour woman, who kept track of all social engagements in the area and made sure to stop by if there was going to be coffee and cake, was sitting on a stool next to them.

‘I’ll be damned. We should make sure to send Sven-Arne out to get the firewood from now on,’ Emil said.

The cousins gave Sven-Arne a look of indifference.

Ante and Sven-Arne dropped the logs straight into the wood bin.

‘Your boys will have to top it up before we leave,’ he said.

‘Of course they will,’ Emil said good-naturedly.

Agnes patted Sven-Arne on the head.

‘Make sure you warm up now.’

He sat down at the end of the table with his back to the stove. His grandmother opened the door and pushed in a log. Ante remained standing, a cup of coffee in his hand.

The warmth in the room made the birthday guests drowsy but the conversation gradually picked up again. Clearly the trio of men, Erik, Emil, and Edvin, had been involved in a discussion that had been interrupted by the return of the wood-bearers. Maybe Ante had gone out to the woodshed to escape it, not primarily to help Sven-Arne. When Emil said something, Ante sighed heavily and mumbled something that to Sven-Arne sounded like ‘Damned whining.’

Ante was different, not just because he had been in a war and was missing two fingers. He maintained a skeptical attitude to most things. Emil called his brother a ‘Snuffy Smith’ and they quarrelled often. It was as if they were drawn into a lifelong duel, only interrupted from time to time simply because they could not stand to listen to the other’s words.

Later, Sven-Arne would understand Ante’s irritation and hopelessness that no words or phrases could persuade or change. When he himself was accused of being one-sided and not flexible enough, then it was Ante’s inheritance making itself felt, for it could not be Eric’s genes that had moulded his mindset. Sven-Arne’s father was ‘flexible’ in the personal sphere as well as in his work as a printer at A&W. Only in his meetings with his brother did he display a tendency toward obstinance.

In general, Eric did not say very much, did not anger, and those times he spoke up it was in a soft-spoken way and with such a disarming smile that any antagonists let down their guard, perhaps in the belief that they had changed his mind.

Since a couple of years back he had been secretary of the local chapter of the Typographical Society, in the eyes of many the ideal of trustworthiness – taciturn, dutiful, and as precise and predictable as the calendars he produced. Eric most often came with not amazing ideas, but well-reasoned propositions, which he called his suggestions, always timely, delivered in a dry, somewhat formalistic, factual tone that vouched for rationality and continuity. The protocols were miracles of meticulous attention and the arrangement of the paragraphs beyond reproach.

Sven-Arne was drinking coffee with milk. He had no idea where the coffee came from, but the milk came from his neighbour’s cows. Rosberg had seven milk-producing cows in a dilapidated barn that threatened imminent collapse. They were discussing whether or not Sven-Arne and his cousins should go over and help clear the snow from the roof. It had been snowing nonstop for two, three days and now warmer weather was coming. This would make the snow heavy as lead and endanger the barn in its frail condition. Ola and Tommy had refused, and Ola added that it was just as well for the barn to collapse. He said this with such assurance and such a grown-up air that no one chastised him. Sven-Arne had realised that adults were allowed to say things without being corrected. If he had said anything to this same effect, he would have been told he was impertinent.

Not even Agnes said anything, even though everyone knew that she and Rosberg were as close as two good neighbours who had lived next to each other their entire lives could be.

That Rosberg himself was missing from the party, and out driving timber, was nothing remarkable. Everyone knew he would come over once the family had gone. After the evening milking he would wash up and take the well-worn path to the cottage. They would have a couple of sandwiches and share a beer. Maybe they would listen to the radio. Not much would be said. At half past nine he would take his leave.

I Shall Not Want by Norman Collins
The Shards of Serenity by Yusuf Blanton
How (Not) to Fall in Love by Lisa Brown Roberts
Switched: Brides of the Kindred 17 by Evangeline Anderson
Jane Austen by Andrew Norman
Lethal Profit by Alex Blackmore
Women and War by Janet Tanner
Filthy (New Adult Romance) - #3 Fierce Series by Wild, Clarissa
Thundering Luv by Preston, LM
Elite: A Hunter novel by Mercedes Lackey