Read The Heart Is Not a Size Online

The Heart Is Not a Size 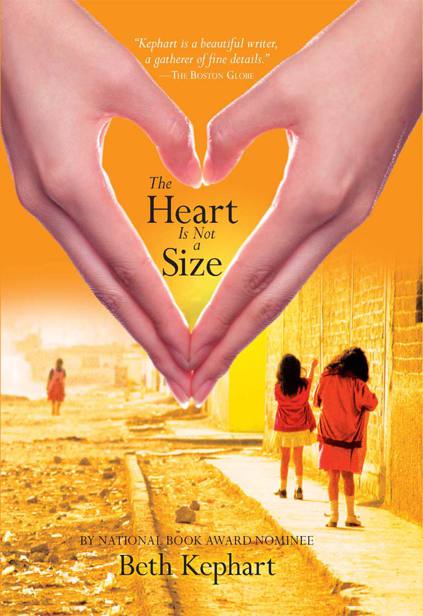 The Heart Is Not a Size

For Jeremy,
who lived Juárez with me,
and whose own heart knows no measure

What I remember now is the bunch of them running:…

It was a sign thumbtacked high on the corkboard of…

All I had to do to convince my mom to…

They like to tell you that panic attacks begin in…

My second panic attack had happened right out in broad…

You can’t ride a bike to the mall from where…

The next day I waited for Riley to call. She…

Two days later, Riley was, apparently, Riley. She had gotten…

The next day I woke to the quadruple clopping of…

We were out of our minds with the heat the…

A little later we were all packed tight into our…

Out in the heat, on the work site, it was…

Back at the compound, after dinner, Mack told a story.

It was on the second day that the children came.

We didn’t get back until five, each of us kids…

We’d stirred up fifteen batches of concrete; Sam and Corey…

Two hours later, when the sandstorm stopped, it was as…

That night, after dinner, most of us went straight to…

The goose woke everybody else. It started honking soon after…

We drove to Anapra with American music playing loud. Drake…

I returned the way I’d come, up along the high…

Roberto’s cousin had brought two bamboo chairs into the room…

A cloud had floated in and opened; at last the…

At dusk we pulled the tables side by side and…

Other Books by Beth Kephart

What I remember now is the bunch of them running: from the tins, which were their houses. Up the white streets, which were the color of bone. All the way to the top of Anapra, to where we were standing in our secondhand scrubs and where Riley said, “They might as well be flowers, blown right off their stalks,” and Sophie said, “This is so completely
wild
,” and the Third said nothing at all. The Third: He wasn’t talking yet. He was all size and silence.

“I should tell Mack,” I said, but I didn’t budge, didn’t even turn and glance back toward where Mack and the others were digging in, hanging tarp, toting two-by-fours from one angle of sun fizzle to another. Because the kids of Anapra might have been chunks of blown-off petals, like Riley said, but they mostly looked like wings to me, flying and flying in their bright, defiant best; their yellow cotton shirts, red fringy skirts, blue trousers. They looked like something no one should lose to a single instant of forgetting.

It was only our second day.

We’d pinned everything on nothing.

We’d flown south through the swill of a storm, ready for service. On the runway the rain against the plane had been the sound of slash, and then there was the high kick of altitude, and then the stitch of lightning through the chunking gray-green clouds. Finally we were through all that and into nothing but blue, the clouds a horrifying plunge below. I was window-seated beside a kid named Corey, who was friends with Sam and Jazzy but not with me; I was thinking about how, up so high, there was nothing to measure distance with. The sky was blue, just that one color—blue. You could fly forever and never get one inch closer to the sun.

Riley was back in seat 15B, accessorized with her hot-pink iPod, her twenty-two beaded bracelets. She’d snatched the tortoiseshell claw from the back of her head before we’d boarded, letting her yellow-streaked-with-orange hair go messy around her shoulders, and she was swamped by this olive T-shirt with these fuchsia letters that would have won any prize, she boasted, for ugly. Riley had one of those freckle mists over the
bridge of her nose and eyes the guys called sapphire. She had thirteen hoops that hung like minitambourine jingles from her left ear. She was smarter than she’d let most people believe; but she was private about that, just as she was with most things. Going to Anapra was the pact we’d made.
If you go, I’ll go:
That was our mantra.

Of course, Riley’s parents thought that I’d be looking out for her, that I’d make sure that nothing lousy happened. That’s the problem with the way I am—big boned, brown haired, straight-backed, steady, and therefore (anyone can do the calculation) revoltingly responsible. When you’re seventeen years old and you’ve never kissed a boy and you’re in all the honors classes, when you can’t stand the thought of sticking fingers into your eyes so you still wear glasses and not contact lenses, when you’re the middle child of three, you have what comes down to no choice. All the neighbors choose you for their cat sitting. All the summer camps want you as their aide. All the parents suggest to their kids:
You should be friends with Georgia
. I was what passed for safe in a hapless world.

Or, at least, to most people I was.

I
t was a sign thumbtacked high on the corkboard of the local Acme. A flyer, really—quick-copy-shop mauve and nothing fancy. The headline read
TWO WEEKS THAT WILL CHANGE YOUR LIFE
—another famous preposterous promise, and so I stopped to read it. I find it humorous, what claims get made in the interest of stirring up business. I find it relaxing, reading the things they stick to the cork at the local grocery store.

So it wasn’t the headline that suckered me in; it was the smaller-type info. The stuff about traveling south of the border, to the great Mexican nation. The promises
about building community.
Participants will come together for a shared purpose,
the flyer said.
They’ll live and work with the people of Juárez on behalf of those with nothing.
Twelve people my age were being solicited for the summer trip, plus two adult chaperones. If you wanted to know more, you could ring up GoodWorks or visit the web. I read the thing through twice, and after that all the other nearby flyers and tabs and desperate pleas for house sitters and dog sitters and nannies. Then I called Riley.

“What’s up?” It was Christmas break of our junior year, four days past the presents. She was downloading songs to her iPod.

“Precisely,” I said. “Reading the corkboard.”

“And I’ve made a discovery.”

“You ever heard of Juárez?”

“That’s a battleship, right? Or, like, the name of a painter?”

“What do you expect?”

“Your best every time, Riley. Always.”

“Okay, so what’s Juárez?” she said, after she remembered I was still waiting.

From the Acme to Riley’s took thirty minutes walking. By bike I could get there in ten. There was a small stretch of ugliness before you got to the perfect prettiness of Riley’s neighborhood, where every mini-mansion sat on a hill and was connected to the street by a cobbled drive. They’d chewed up a farm to make room for the homes, and then they’d gone and rooted in new trees—little spindles that gave off no shade and hardly dirtied the emerald-colored lawns with fallen leaves. In the winter those trees looked like shiver, all lit with Christmas doodads.

At Riley’s, which was the biggest house on the tallest hill, there must have been two dozen of those
minuscule birches—twelve on one side of the cobbled drive, twelve on the other—all of them done up with blinking reds, greens, whites. I had to walk my bike to the top of that hill. I parked it around back and out of sight—rule number 37,854 of Riley’s more-perfect-than-most-perfect mother. I called Riley after I parked. She let me in through the back door and I went up the set of back stairs. It was easier than going the front-door route and drinking ginger tea with Riley’s mom.

Riley was sprawled out as usual when I found her, looking tinier than ever in her pink-frilled, queen-sized bed. She had a bunch of pillows at her head and the buds of her iPod plugged in. She was doing a squiggle dance on her back like a flipped-over turtle, but when she saw me she yanked at her ear buds, slapped the edge of the mattress, and invited me to sit down.

“Do you have an encyclopedia in this room?” I asked, looking past her now to the wall of shelves where she kept every scrap of collected thing. Used water bottles, lacrosse medals,
People
magazines, the little dolls that her parents used to bring her from their around-the-world trips—
excursions
, they called them. There were sketches she’d never developed for art and sculptures
that had gone screwy and buckled watercolor portraits; there was a bunch of books lying sideways, like props—little stages on which sat the fuzzy elephants and neon monkeys from the Devon Horse Show, where we’d gone every year since we were kids and where Riley inevitably won at the water pistol booth.

I tilted my head sideways to read the names of the books, pushed my glasses up on the bridge of my nose. Finally I found something that said
World Atlas
. Probably some gift from some aunt somewhere. Clearly not a book Riley’d ever opened. “You mind?” I asked, starting to shift things around—moving a stuffed turkey to the ledge of another book, shifting a squeaky mouse to a shelf below. When Riley didn’t answer, I turned around. She had her ear buds back in. She was dancing.

Flipping through the pages of the atlas, I got to Mexico in no time, then found Juárez, which is directly across the Rio Grande from the Texas town of El Paso. Fourth largest city in Mexico, the atlas said. Home of the final battle of the Mexican Revolution. Sited along
the famous El Camino Real. Juárez is a border town, a real place, in an atlas. Google makes a lot of promises, I’ve found. An atlas goes sturdy with the facts.

“Riley,” I said. “Please.” I pantomimed about the ear buds until she plucked them out.

She laughed her lovely Riley laugh. I sat beside her, let her laugh.

A
ll I had to do to convince my mom to give me two weeks off was to promise her a rest-of-summer’s worth of babysitting. My younger brother, Kev, was nine going on 150 miles per hour. He was all Fantastic Four wrapped into one; and his most death-defying mission was messing with Geoff, my older, bound-for-college brother. My mother volunteered mornings at the local library. Every summer, she begged me to make sure Kev stayed alive. “Just don’t let him hurt himself” was her favorite line, and then she’d close the door and go to her morning of superlatively well-behaved
library books, to rooms that were so quiet you could hear a pencil snap. I offered my mother a—she loved the word—reprieve. I was the someone Kev mostly obeyed. Geoff had no patience, never had, not for his little brother. I said that if she let me go off to Juárez, I’d be home afterward, available every library morning from mid-July through the day that school began.