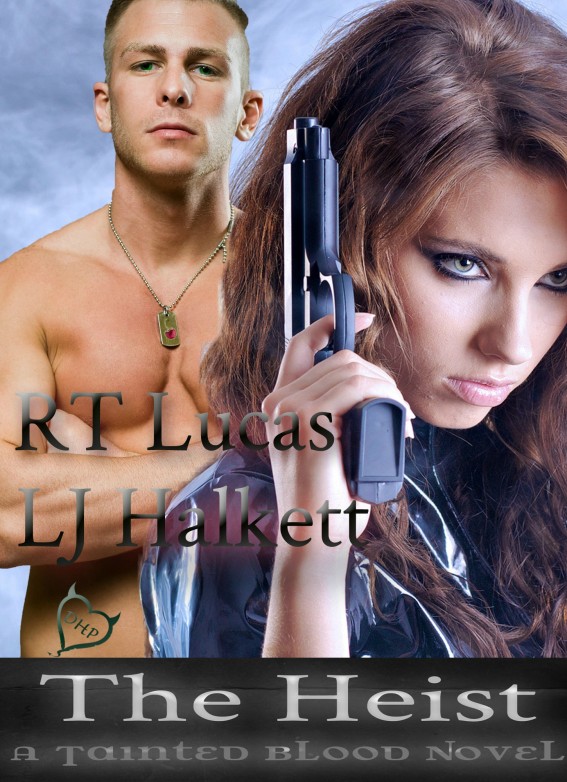 About the
eBook You Have Purchased

All rights
reserved. Without reserving the rights under copyright, reserved
above, no part of this publication may be reproduced, stored in or
introduced into a retrieval system, or transmitted in any form, or
any other means (electronic, mechanical, photocopying, recording or
otherwise) without the prior written permission of the copyright
owner and the above publisher of this book.

Distribution
of this e-book, in whole or in part, is forbidden. Such action is
illegal and in violation of the U.S. Copyright Law.

All cover art
and logo copyright © 2014 by Dark Hollows Press

ALL RIGHTS
RESERVED: This literary work may not be reproduced or transmitted
in any form or by any means, including electronic or photographic
reproduction, in whole or in part, without express written
permission.

All characters
and events in this book are fictitious. Any resemblance to actual
persons living or dead is strictly coincidental.

Dedicated to my Piston
Hips - that pedestal I’ve always had you on? Well, Darlink it now
reaches the sky!

Dedicated to Sweetcheeks - The story is just
beginning, yeah?

Fairy-tales…Where happily
ever after exists.

Welcome to my
world, where Vampires and defective DNA wolf genes are real and
happening, nothing written down on paper to pass on and no stories
to be recited for generation after generation.

If you read between the
lines of the fables though, you’ll see lies and deceit coursing
through every page.

One thing I
despise more than not having a cherry lolly in my mouth? A
Liar!

Alicia
Carberletti lay on her bed staring at the ceiling, her brown eyes
almost vacant as she lay motionless. Only when she blinked to stop
the tears that were threatening to fall from her eyes did she give
an indication of life.

The pint sized
brunette had just returned from her childhood residence where she
had come across an old journal. Naldina Carberletti’s every
thought, emotion, and feeling that she had experienced was recorded
on the paper. Alicia had flicked through the pages, her eyes
scanning her Madre’s beautiful scripted handwriting. It was
then that she saw the words that shattered her happy little bubble
and changed her life forever…
Mafia
.

Her Papa,
Alessandro Senior, was a very powerful Italian Mafia Don, both
respected and feared by his men and other Families
alike.

Naldina had
documented how she vowed to keep Alicia sheltered from that life —
it was not a way that she wanted her daughter being raised. She was
a young lady and would court the finest of Italian men, marry and
have a beautiful family...not the life that Naldina had. Yes the
woman was wealthy, had a very loving husband and two children she
would die to protect, but there was always a sense of danger
looming.

The more Alicia read, the
more upset she became.

For
twenty-five years her parents had lied to her. The next entry in
the journal hit her like a wrecking ball, causing the book to fall
at the distraught female’s feet.

Her twin
brother Alessandro Junior — it was his destiny to follow in his
father footsteps. He was inducted into the Mafia world on 31
October, 1886, the year the twins turned sixteen.

Alicia cried, shouted and
threw things about her London apartment for three days. She had
read over the journal over and over, obsessively.

Her Madre’s
last recorded entry was 1897, two years after her daughter's
‘sudden disappearance’. With her daughter presumed dead and her
beloved husband and son assassinated by the Belcastro Dynasty,
Naldina spiralled into a dark depression.  Her beautiful
daughter had never been found, she didn’t even have a body to bury.
Naldina had nothing left to live for.

The
devastation of reading her Madre’s journal consumed the pint sized
Alicia, and that was when she vowed to herself that she would
avenge her family by taking down the existing Belcastro
bloodline.

It was time
she got to work…

His neon
green eyes scanning the busy nightclub, Commander Xavier Raige
ignored for the most part what his best friend and Lieutenant was
saying to him as he drank down his Scotch and kept a very close
counsel.  He was a formidable looking man whose six foot seven
frame overshadowed that of his companion. There were few people
that Commander Raige actually liked in this life, and even fewer
that he trusted with his life.  Shuggie was that rare breed
that he liked, respected and trusted.

But even that
could be put to the test on occasion.

“
Ah’m tellin’
ye Commander, ye dinnae want tae get involved with the Belcastros —
they’re nowt but bad news.” In the darkest corner of the club,
Shuggie shouted his words over the thud-thud-thud of the music
whilst the lights blinked. Xavier side-glanced him quickly then
sunk back his glass of Scotch.

“
And I’m telling
you
Shug to fucking drop it, yeah?”

For the past
three hours the two men had been discussing the latest job that
Xavier had just been offered. Xavier Raige was ex-Special Ops and
had an unrivalled record in mercenary work around the world, which
had earned him the reputation of being the best that money could
buy.  Ruthless, direct and focused — he was practically
married to his work.  No family, no ties. The only
responsibility he had was to himself and to his unit of specially
trained, handpicked soldiers. He had skills that those with money
and connections with ‘interests’ that were outside of the law were
more than happy to pay a premium price to hire.

The
Belcastros were a notorious Mafia family who had relocated to the
heart of Mexico.  Legend had it they were exiled from Sicily
back in the day after what had been considered dodgy dealings —
even within the Mafia world.  Xavier knew that if they were
having problems dealing with their latest situation in-house, then
it had to be some major shit that was going down.  His best
guess was that if word got out they couldn’t deal with it
themselves, it would be a sign of weakness. The other Families
might take that as a green light to go against them and claw back
some of the territory and business that the Belcastros had
‘relieved’ them of through the years.

“
Ah dinnae
trust them, Commander. How’d they get yer name anyway? If ye asked
me fur ma opinion, it’s no a coincidence that we were in Mexico
when the call wis made.  The Belcastros kin deal wi’ their ain
shite. We dinnae need the job, and it’s meant tae be oor downtime
after the last mission.”

Shuggie
chugged back on his bottle of beer, unhappily.  The hint of
red behind his blue contact lenses glinted as the strobe lights lit
up their corner of the club.  He had learned through the
centuries to mask his true nature when amongst the humans.
That was something that Xavier understood, although it still
amused him to see the huge warrior fiddle like a female trying to
put the damn things in his eyes every day.

“
I didn’t ask
for your hairy highlander’s ass opinion,” Xavier thought wryly to
himself as Shuggie lifted his hand to beckon the waitress over to
order another round of drinks.  Xavier knew that Shuggie was
like a dog with a bone and wouldn’t let the subject drop.
Scrubbing a hand over his face, he grimaced as he realised
the stubble scratching his face was more hobo than designer — he
might be a hardened soldier, but he was fuck handsome and prided
himself on his looks.  Xavier leaned forward, jutting his jaw
as he was forced to address Shuggie’s concerns.

“
You really
think that I’d be dumbass enough not to have researched the
Belcastros before I agreed to the job?” Xavier’s tone was gruff as
he regarded his friend with a steely look that would have had
lesser men losing control of bodily functions and whimpering like a
baby.

“
Aye, ah dae,
Commander,” Shuggie leaned back, spreading his arms along the back
of the seats, a small smirk starting to form on his lips. “That’s
why ah already done ma ain investigation into them.” Shuggie’s
broad Scottish accent was almost indecipherable to most, but Xavier
had known him for longer than he cared to admit and could often
translate for the uninitiated — if he could be bothered, that was.
Shuggie was armed with the knowledge that he’d just scored a
point over the Commander, and yet he still owned just enough
self-preservation instinct to know not to blatantly crow about it.
His smug expression was all that was needed between the two
friends to know who had the upper hand.

Xavier was
irked by Shuggie’s comment but kept his facial features
impassive.

“
Well, are
you going to sit on it like a whore on a cock or are you going to
actually tell me what your investigations found out?” He gave a
derisive snort as he drew his eyes off of Shuggie and reached over
to take the fresh drink the pretty young waitress with the perky
smile and perkier tits had just brought over for him.  She
smiled and winked as he tipped her well, but the smile faltered
when he turned his head away to continue his conversation.
The waitress hovered about their table, trying to look
seductive. She was completely unaware that she had in reality been
blanked by both men.  Shuggie reached into the inside pocket
of his biker jacket and handed Xavier a flash drive with all the
Intel he had on the Belcastros.

The dilemma
for Xavier sat heavy on his broad shoulders. Did he take Shuggie’s
advice and leave well alone, or did he drag his Unit into Mafia
business?  It wasn’t like they needed the money — they didn’t
do it for the financial gain. Well, that’s not true. In the early
days that was the only motivating factor, but nowadays they had
more than enough money banked and invested to keep them for the end
of their days. No, nowadays it was all about the adrenalin, the
challenge, the rush.

Top Secret Restaurant Recipes 2 by Wilbur, Todd
D & D - Red Sands by Tonya R. Carter, Paul B. Thompson
Under the Lights (A Brothers of Rock - GONE BY AUTUMN - Novel) by Karolyn James
The Wild Girl by Kate Forsyth
For the Love of Gracie by Amy K. Mcclung
Carolina Girl by Virginia Kantra
Distemper by Beth Saulnier
The Last Temptation of Christ by Nikos Kazantzakis
Sweetheart in High Heels by Gemma Halliday
The Touch of Death by John Creasey