Read The Hero and the Crown Online

The Hero and the Crown 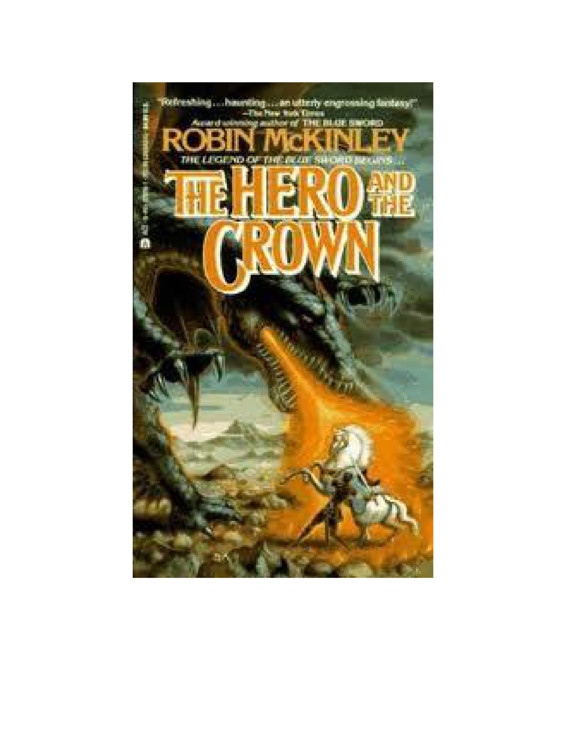 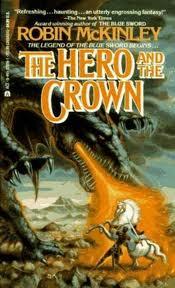 The Hero And The Crown

time of The Blue Sword. There are a few fairly dramatic topographical differences

between the Damar of Aerin’s day and that of Harry’s.

SHE COULD NOT REMEMBER a time when she had not known the story; she

had grown up knowing it. She supposed someone must have told her it,

sometime, but she could not remember the telling. She was beyond having to

blink back tears when she thought of those things the story explained, but when

Damarian Hills she still found herself brooding about them; and brooding

sometimes brought on a tight headachy feeling around her temples, a feeling like

She brooded, looking out over the wide low sill of the stone window-frame; she

looked up, into the Hills, because the glassy surface of the courtyard was too

bright at midday to stare at long. Her mind ran down an old familiar track: Who

might have told her the story? It wouldn’t have been her father who told her, for

younger; his slow kind smiles and slightly preoccupied air had been the most she

knew of him. She had always known that he was fond of her, which was

something; but she had only recently begun to come into focus for him, and that,

as he had told her himself, in an unexpected fashion. He had the best—the only—

right to have told her the story of her birth, but he would not have done so.

Nor would it have been the hafor, the folk of the household; they were polite

to her always, in their wary way, and reserved, and spoke to her only about

household details. It surprised her that they still remembered to be wary, for she

had long since proven that she possessed nothing to be wary about. Royal

children were usually somewhat alarming to be in daily contact with, for their

Gifts often erupted in abrupt and unexpected ways. It was a little surprising, even,

that the hafor still bothered to treat her with respect, for the fact that she was

had borne her. But then, for all that was said about her mother, no one ever

suggested that she was not an honest wife.

her, as Galanna would—and regularly did, even though everyone treated her with

the greatest deference humanly possible. Galanna’s Gift, it was dryly said, was to

be impossible to please. But perhaps from the hafor’s viewpoint it was not worth

Galanna; and a life of service in a household that included Galanna doubtless

rendered anyone who withstood it automatically wary and respectful of anything

that moved. She smiled. She could see the wind stir the treetops, for the surface

of the Hills seemed to ripple beneath the blue sky; the breeze, when it slid

through her window, smelled of leaves.

It might very well have been Galanna, who told her the story, come to that. It

would be like her; and Galanna had always hated her—still did, for all that she

was grown now, and married besides, to Perlith, who was a second sola of Damar.

The only higher ranks were first sola and king; but Galanna had hoped to marry

Tor, who was first sola and would someday be king. It was no matter that Tor

run off into the Hills and be a bandit first,” a much younger Tor had told his very

young cousin, who had gone off in fits of giggles at the idea of Tor wearing rags

and a blue headband and dancing for luck under each quarter of the moon. Tor,

to ensnare him, had relaxed enough to grin and tell her she had no proper respect

and was a shameless hoyden. “Yes,” she said unrepentantly. Tor, for whatever

reasons, was rather over-formal with everyone but her; but being first sola to a

solemn, twice-widowed king of a land with a shadow over it might have had that

effect on a far more frivolous young man than Tor. She suspected that he was as

grateful for her existence as she was for his; one of her earliest memories was

of hurdles; she had screamed with delight and wound her tiny hands in his thick

black hair. Teka, later, had been furious; but Tor, who usually took any accusation

of the slightest dereliction of duty with white lips and a set face, had only

She leaned out of the window and looked down. It was hard to recognize

people from the tops of their heads, several stories up. Except Tor; she always

knew him, even if all she had to go on was an elbow extending an inch or two

beyond a doorframe. This below her now was probably Perlith: that self-satisfied

walk was distinctive even from above, and the way three of the hafor, dressed in

fine livery, trailed behind him for no purpose but to lend to their master’s

importance by their presence pretty well assured it. Tor went about alone, when

he could; he told her, grimly, that he had enough of company during the course of

his duties as first sola, and the last thing he wanted was an unofficial entourage

for any gaps in the official ones. And she’d like to see her father pulling velvet-

covered flunkeys in his wake, like a child with a toy on a string.

several arms1 length distant; then someone on a horse—she could not distinguish

voices but she heard the click of hoofs—emerged from around a corner. The rider

wore the livery of a messenger, and the cut of his saddle said he came from the

west. Both heads turned toward him and tipped up, so she could see the pale blur

of their faces as they spoke to him. Then the horseman cantered off, the horse

placing its feet very delicately, for it was dangerous to go too quickly across the

courtyard; and Perlith and the other man, and Perlith’s entourage, disappeared

on; but the knowledge gave her no pleasure, for it had already brought her both

that kept her mewed up in her rooms, alone, now.

messages and messengers, as they tried to slow down whatever it was that would

happen anyway, while they tried to decide what to do when it had happened. The

western barons—the fourth solas—were making trouble. The rumor was that

someone from the North, either human or human enough to look it, had carried a

council in the spring. Nyrlol was the chief of the council for no better reason than

Nyrlol was not known for intelligence, and he was known for a short and violent

temper: the perfect target for demon-mischief.

Arlbeth had chosen to pay no attention to the second rumor; or rather to pay

only enough attention to it to discount it, that none of his folk might think he

shunned it from fear. But he did declare that the trouble was enough that he

must attend to it personally; and with him would go Tor, and a substantial portion

of the army, and almost as substantial a portion of the court, with all its velvets

and jewels brought along for a fine grand show of courtesy, to pretend to disguise

the army at its back. But both sides would know that the army was an army, and

the show only a show. What Arlbeth planned to do was both difficult and

dangerous, for he wished to prevent a civil war, not provoke one. He would

choose those to go with him with the greatest care and caution.

“But you’re taking Perlith?” she’d asked Tor disbelievingly, when she met him

by chance one day, out behind the barns, where she could let her disbelief show.

Tor grimaced. “I know Perlith isn’t a very worthwhile human being, but he’s

actually pretty effective at this sort of thing—because he’s such a good liar, you

know, and because he can say the most appalling things in the most gracious

No women rode in Arlbeth’s army. A few of the bolder wives might be

permitted to go with their husbands, those who could ride and had been trained

in cavalry drill; and those who could be trusted to smile even at Nyrlol (depending

on how the negotiations went), and curtsy to him as befitted his rank as fourth

sola, and even dance with him if he should ask. But it was expected that no wife

would go unless her husband asked her, and no husband would ask unless he had

Galanna would certainly not go, even if Perlith had been willing to go to the

granted). Fortunately for the peace of all concerned, Galanna had no interest in

going; anything resembling hardship did not appeal to her in the least, and she

herself in some small ways; who had learned to keep her mouth shut, and to

smile on cue; a king’s daughter who happened to be the king’s only child. She had

known they would not let her; she had known that Arlbeth would not dare give

his permission even had he wanted to, and she did not know if he had wanted to.

of demon-mischief; his people would never let him, and he too sorely needed his

But she could not help asking—anymore, she supposed, than poor stupid Nyrlol

could help going mad when the demon-mischief bit him. She had tried to choose

her time, but her father and Tor had been so busy lately that she had had to watt,

and wait again, till her time was almost gone. After dinner last night she had

finally asked; and she had come up here to her rooms afterward and had not

“Father.” Her voice had gone high on her, as it would do when she was afraid.

The other women, and the lesser court members, had already left the long hall;

Arlbeth and Tor and a few of the cousins, Perlith among them, were preparing for

another weary evening of discussion on Nyrlol’s folly. They paused and all of them

turned and looked at her, and she wished there were not so many of them. She

swallowed. She had decided against asking her father late, in his own rooms,

where she could be sure to find him alone, because she was afraid he would only

be kind to her and not take her seriously. If she was to be shamed—and she

knew, or she told herself she knew, that she would be refused—at least let him

see how much it meant to her, that she should ask and be refused with others

“You ride west—soon? To treat with Nyrlol?” She could feel Tor’s eyes on her,

My Old Neighborhood Remembered by Avery Corman
But the Children Survived by A. L. Jambor
The Beat of Safiri Bay by Emmse Burger
Castaway Dreams by Darlene Marshall
Winterland by Alan Glynn
Beyond Temptation by Brenda Jackson
Tales of the Hood by T K Williams-Nelson
The Bear's Arranged Mate: A Bear Shifter Romance Novel by Amy Star, Simply Shifters
Tempted by von Ziegesar, Cecily
The White Trilogy: A White Arrest, Taming the Alien, The McDead by Bruen, Ken