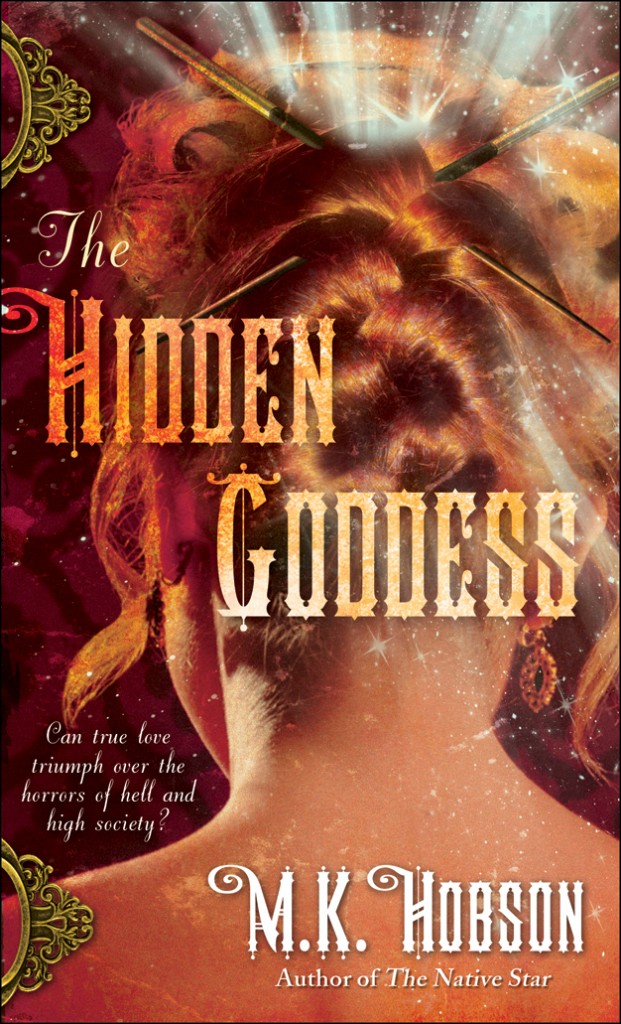 Praise for
The Native Star

“M. K. Hobson dazzles!
The Native Star
is an awesome mash-up of magic and steam-age technology—call it witchpunk. This debut novel puts a new shine on the Gilded Age.”

“Splendid! In
The Native Star
, M. K. Hobson gives us a Reconstruction-era America, beautifully drawn and filled with the energy of a young nation—and magic! Her heroine, Emily Edwards, is outspoken, brash, loving, and true; a delight to spend time with. Could there be a sequel, please?”

The Hidden Goddess
The Native Star

The Hidden Goddess
is a work of fiction. Names, characters, places, and incidents either are the product of the author’s imagination or are used fictitiously. Any resemblance to actual persons, living or dead, events, or locales is entirely coincidental.

Published in the United States by Spectra, an imprint of The Random House Publishing Group, a division of Random House, Inc., New York.

S
PECTRA
and the portrayal of a boxed “s” are trademarks of Random House, Inc.

To everyone who helped make this book a reality (and you know who you are), I offer my humblest gratitude. Special thanks go to Sara Mueller, a brilliant writer and good friend, whose ideas about the mechanics of earth magic inspired many of Emily’s magical experiences.

Naked, Lieutenant Utisz stood on a frost-rimed block of black obsidian before two tall doors made of intricately arranged human bones. A red-robed Temple acolyte knelt before him, washing his bare abdomen with a flaccid sponge, dipping it in ice water that smelled of blood.

It will be an honor to serve my country
.

Utisz tried to conjure the conviction with which he’d spoken these words to General Blotgate, and willed himself not to shiver.

The lieutenant was in a small anteroom that echoed with the sound of water rushing through deep unseen channels.
The Purification Crypt
, it had been called by the attendant who had escorted him from the steamy heat of jungle summer into the frigid depths of this cavernous necropolis. The attendant had explained that all who would enter the Calendar Chamber must be ritually cleansed then anointed with bitter oils. And then the attendant had relieved him of his uniform, from epaulettes to skivvies.

Utisz clenched his jaw. Apprehension beat against his neologism—the magical ward behind which his emotions were locked. He regarded his own fear with dispassionate distance, as if listening to the far-off screams of a woman being chased by men who would brutalize her. Dissecting it, he decided that it was attributable merely to the coldness of the
sponge (now passing over his genitals, damn it!), the disorientation of having been led into this place blindfolded, and a lingering fear of the dark—gained at the orphanage—that he’d never been able to entirely root from his psyche. None of it was pertinent to the task at hand.

The task at hand lay behind the two tall doors of polished bone. In the Calendar Chamber, where she waited—Itztlacoliuhqui, the Black Glass Goddess, the Goddess of Obsidian Knives.

I am sure you have heard rumors about the recent … unpleasantness … at the credomancers’ Institute in New York?

He remembered the words, spoken by General Oppenheimer Blotgate, Director of the Erebus Academy—the highest-ranking magical practitioner in the United States military. A man rarely seen and never spoken to. This in itself had been enough to make an invitation to his rosewood-paneled office unsettling. But adding to Utisz’ disquiet had been his inability to imagine any professional matter on which the General might conceivably summon him. He’d only just graduated as a second lieutenant, and hadn’t even received a posting yet. Utisz had been left to conclude that he was being called to discuss matters of a more
personal
nature. Word around the barracks was that the General had never once taken exception to his wife’s serial indiscretions with much younger men—she had a renowned fondness for cadets—but it would be just his luck if he was the first to be called on the carpet.

So when the General had commenced the interview by asking about unpleasantness and credomancers, Utisz had been extremely relieved, if no less puzzled.

“I heard that Captain John Caul was killed” had been his crisp response. Back ramrod straight, eyes unwaveringly forward. “Murdered, sir.”

“A profound tragedy,” General Blotgate confirmed solemnly, light catching on the thick-seamed scar that ran from his ear to his shoulder. His voice was a low, crackling rasp. “He was extremely well regarded by the President. Grant kept trying to promote him, and Caul kept convincing
him not to. He could have had the command of all the Army’s magical divisions—but Caul was a soldier. A man of action. He preferred to operate independently, with a small hand-picked unit of the finest Maelstroms.”

“His murder will be avenged,” the lieutenant said, guessing that was the ultimate aim of the General’s impromptu eulogy. But if it was, the General didn’t notice the young officer’s cleverness.

“Captain Caul was a true patriot,” he continued. “Sadly, there is a fine line between patriotism and paranoia.”

Blotgate reached into a carved box on his desk and withdrew a cigar. He did not hurry in lighting it, but rather left Utisz standing while he pierced it, clipped it, and lit it with snapped fingers and a guttural command summoning flame.

“Son, have you ever heard of the Temple of Itztlacoliuhqui?”

“A sect devoted to the worship of an Aztec goddess, sir. It is said that they seek to destroy the world in a great blood-apocalypse called
temamauhti
.”

“Nothing could be further from the truth.” Blotgate waved the cigar dismissively. “Why would anyone want to destroy the world? A misapprehension spread—with the best of intentions, no doubt—by Captain Caul. The truth is, the Temple seeks to
remake
the world, with themselves and a select group of allies in positions of leadership. We intend that the United States play a key role in that future leadership.”

“Captain Caul’s death has provided me with the opportunity to instruct the President on the
true
nature of the Temple’s intentions. I must say, it took some doing to dislodge the misinformation Caul had hammered into Grant’s thick old skull.” Blotgate paused, half smiling, as if recalling a pleasant memory. It made Utisz wonder just how much convincing the President had required, and how precisely Blotgate had gone about it. “In any case, I am pleased to say that the President has finally relinquished his stubbornness. I have been given approval to proceed with a course of action I have advocated since before the war—a formal military alliance with the Temple of Itztlacoliuhqui.”

The General took in a mouthful of smoke and rolled it over his tongue. It was as if he was waiting for a round of applause. But his air of self-satisfaction dispersed as quickly as the smoke, replaced with a bitter frown.

“Of course, we should have embarked on this course a decade ago,” he said. “The delay has given our enemies time to work against us.”

Her Cyborg by Nellie C. Lind
Till We Meet Again by Sylvia Crim-Brown
Dawn and the Dead by Nicholas John
Polls Apart by Clare Stephen-Johnston
Magick (Immortals and Magick Book 2) by Teresa Federici
Capital City Chronicles: The Island by Goss, S.E.
A Summer To Remember: Novella (Lost Love Book 1) by Richards, C.L.
Seduce Me Sweetly (Heron's Landing Book 1) by Iris Morland
The YIELDING by Tamara Leigh
Passion at the Castle by Diane Thorne