Read The Hidden History of the JFK Assassination Online

The Hidden History of the JFK Assassination 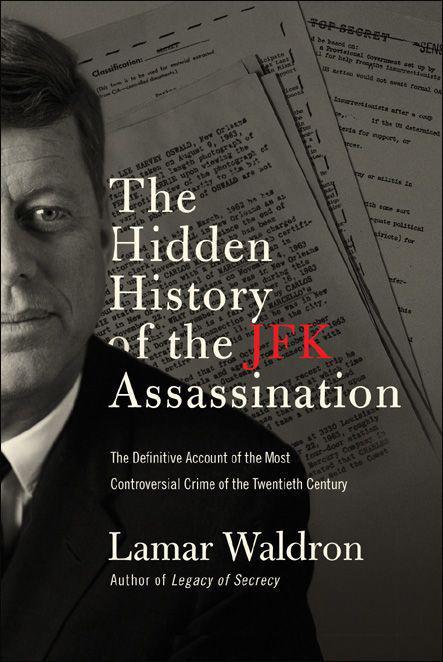 THE HIDDEN HISTORY OF THE JFK ASSASSINATION 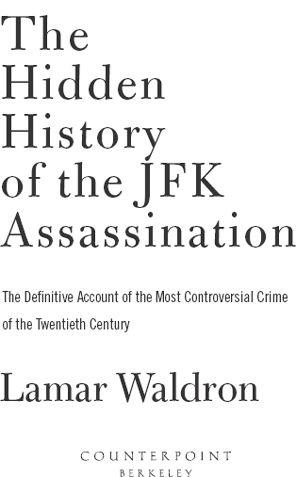 The hidden history of the JFK Assassination : the definitive account of the most controversial crime of the twentieth century / Lamar Waldron.

To Abraham Bolden, selected by JFK as the first black presidential Secret Service agent. Bolden is still fighting to clear his name after being framed by the Mafia almost fifty years ago.

“Single Bullet Theory” Demolished and a New Look at Oswald

CIA vs. Castro, and The Kennedys vs. Carlos Marcello

Marcello Meets with Ruby and Oswald

Carlos Marcello and the Hit Men for JFK’s Murder

Targeting JFK in Chicago and Tampa in November 1963

JFK Is Assassinated in Dallas

Officer Tippet Is Killed and Problems Arise for Marcello

Another Mafia Murder in Dallas

Secret Investigations and Getting Away With Murder

F
IFTY YEARS HAVE passed since the murder of President John F. Kennedy, yet even with millions of words written about the case,
The Hidden History of the JFK Assassination
provides the final pieces to that puzzle for the first time. While several hundred books about President Kennedy’s assassination have been published over the past five decades, fewer than two dozen have seriously dealt with the tidal wave of new information and evidence that has emerged in recent years. Many of those new revelations resulted from the 4.5 million pages of JFK assassination files released throughout the 1990s as a result of the 1992 JFK Act.

Even fewer books have presented that information in a clear, concise way accessible to readers not already steeped in the sometimes arcane and always complex terminology of JFK assassination research. Previous books that provided ample, credible documentation to prove their claims had the additional problem of extreme length. I have personal experience with that, since my first two books on JFK’s murder—
Ultimate Sacrifice
and
Legacy of Secrecy
—were each more than nine hundred pages. They had a combined total of almost four thousand endnotes documenting sources, hardly the type of book that most readers can easily digest.

New revelations about the case continue to emerge, both from previously released government files and from participants in operations
for which the files are still mostly withheld. For example, in 2008
Legacy of Secrecy
first revealed and named the FBI’s daring undercover CAMTEX operation, which lasted from 1985 to 1986. On December 15, 1985, that operation obtained godfather Carlos Marcello’s confession that he had ordered JFK’s murder. More information about the CAMTEX operation, including the name of the FBI’s undercover informant, Jack Van Laningham, appeared for the first time in the updated trade paperback of
Legacy of Secrecy
in 2009.

Most of that book’s information came from uncensored FBI files I uncovered from officials involved in the operation. However, since that time, I have had dozens of interviews and conversations with Van Laningham. His observations illuminated many aspects of Marcello’s involvement with JFK’s murder—as well as with Lee Oswald and Jack Ruby—that weren’t completely clear from the files alone. In addition, I uncovered independent corroboration for many of Van Laningham’s observations, originally made when he was Marcello’s cellmate and confidante for many months in 1985 and 1986.

For the first time, that documented information allows the full story of JFK’s assassination to be told in a clear, concise manner, one backed up by the most important earlier discoveries about JFK’s murder.

The story of Carlos Marcello, Jack Van Laningham, and JFK’s assassination will be told in the upcoming film
Legacy of Secrecy
, currently being produced by—and starring—Leonard DiCaprio, with Robert De Niro slated to play Marcello. However, that film can tell only a small portion of the whole story of JFK’s murder. This book provides a much fuller account and provides the supporting documentation backing it up.

Credibility is always important in evaluating information about JFK’s murder and in deciding which books or revelations to believe.
Because I have presented documented information from credible sources, buttressed by independent corroboration, my work has received more mainstream press coverage than most books documenting a conspiracy in JFK’s murder. This includes appearing numerous times on CNN and in television documentaries about my work produced by a division of NBC News for the Discovery Channel and by German Public Television. Those organizations have been able both to verify the authenticity of the declassified files I showed on those programs and to interview some of my key sources. Other coverage has come from hundreds of newspapers, magazines, radio stations, and television stations, in this country and others. Moreover, I aided the staff of the Presidentially appointed JFK Assassination Records Review Board in the 1990s, identifying important government files that were not being turned over to the Board by US agencies as the law required.

Many of the key disclosures in this book came from more than two dozen key associates of John and Robert Kennedy, interviewed by me and by my original research collaborator, radio and television commentator Thom Hartmann. I then found or helped get declassified files that verified their accounts. In addition, my research was aided by many of the best writers, historians, and former government investigators in the field, many of whom are cited throughout the book and all of whom are named in this book’s extensive Acknowledgments.

For twenty-five years, I have been building on their work and advancing the findings of the five government investigating committees that came after the Warren Commission. I spent most of that time working full-time on the case, and this book is the first compact culmination of all that research.

In response to requests from readers, this book features an Annotated Bibliography, making it easy for readers to refer to
the books, articles, and documents used as source material. The Bibliography identifies books with additional well-documented information about certain aspects of JFK’s assassination and specifies which websites have major document collections, where readers can view online many of the important files cited in the text. In my previous books, bibliographic information lay instead in thousands of endnotes. Though
The Hidden History of the JFK Assassination
has the same high level of documentation as my earlier works, we have dispensed with endnotes for this book. Now, it’s easy to simply Google most quotations to find more information about their source. Also, because of its shorter length, this book focuses on only the most important people involved in these events—in contrast to my earlier works, which contained hundreds of names of officials, witnesses, participants, journalists, and sources, often dozens in a single chapter. Those wanting more in-depth information about any of the topics dealt with in this book can find it in the updated trade paperbacks of
Ultimate Sacrifice
(2006) and
Legacy of Secrecy
(2009) and in my 2013 edition of
Watergate: The Hidden History
, which devotes almost two hundred pages to JFK’s assassination.

When I began researching the case in 1988, I started with no preconceived conclusions and looked at the evidence against all the individuals and organizations that some considered suspects. Focusing on credible sources, information, and documentation for which there is independent corroboration—and that have stood the test of time—led me to new discoveries and to a cohesive story of what really happened to President Kennedy. The final result of that research is in this book.

Since 1966, dozens of carefully researched and well-documented books have thoroughly debunked every aspect of the Warren Commission’s conclusion and process, often using the Commission’s
own evidence as well as information that was withheld from the Commission. (The best books are listed in the Annotated Bibliography.) The most recent books to do so are 2005’s
Breach of Trust
by noted historian Gerald D. McKnight and
A Cruel and Shocking Act
, veteran
New York Times
reporter Philip Shenon’s 2013 book about the Warren Commission.
Chapter Two
of
The Hidden History of the JFK Assassination
debunks some of the Warren Commission’s most glaring errors, but the rest of the book focuses primarily on telling the documented story of what led to the murder of John F. Kennedy as simply and as concisely as possible.

The Hidden History of the JFK Assassination
first gives a brief overview of the overwhelming amount of evidence for a conspiracy in JFK’s murder. It then describes the Warren Commission’s 1964 conclusion about JFK’s murder (largely adopted by authors such as Bill O’Reilly, Vincent Bugliosi, Gerald Posner, and Stephen King) and shows how that conclusion is demonstrably wrong. It also presents well-documented information that will show accused assassin Lee Oswald in a whole new light for most readers.

After revealing new information about the FBI’s CAMTEX operation and Carlos Marcello, this account begins the chronological story of Marcello’s rise to power. It explains why he came to be targeted by John and Robert Kennedy and how he—and his criminal associates—became involved in CIA operations against Fidel Castro without the knowledge of the Kennedys.

Step by step, the book discloses how JFK was assassinated in a way that forced several top US officials, including Attorney General Robert Kennedy, to withhold key information from the press, the public, and the Warren Commission. They did so to prevent another dangerous US confrontation with the Soviet Union just a year after the tense
nuclear standoff during the Cuban Missile Crisis. Three CIA agents, officers, and assets who were involved in JFK’s murder—two of whom confessed before they died—are also named. The book also reveals new information from Carlos Marcello about Lee Oswald, Jack Ruby, and the Mafia hit men in Dealey Plaza when JFK was killed.

Moon White: Color Me Enchanted with Bonus Content by Carlson, Melody
Alamut by Judith Tarr
Moon Pie by Simon Mason
A Brief History of the Private Lives of the Roman Emperors by Anthony Blond
Watcher in the Pine by Pawel, Rebecca
Lamb by Christopher Moore
Ariel Custer by Grace Livingston Hill
Fangs in Frosting by Cynthia Sax
This Birding Life by Stephen Moss
Godiva by Nicole Galland