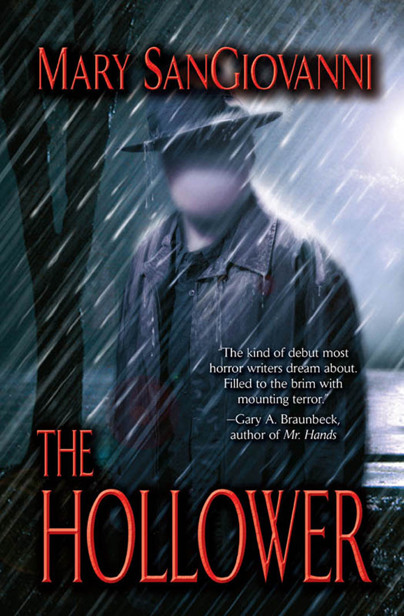 PRAISE FOR MARY SanGIOVANNI AND
THE HOLLOWER
!

“Mary SanGiovanni is one of my favorite authors. Her work is cause for celebration, and always a fun read! I’m a big fan!”

“With
The Hollower
, Mary SanGiovanni makes the kind of debut most horror writers dream about; this superbly-written novel is filled to the brim with mounting terror, shocking set pieces, some of the richest characterization you’ll encounter anywhere this year, and a central figure of undeniable dread. It’s got it all: scares, poignancy, people you know as well as your own family, and an unrelenting tension that will have your hands shaking by the time you reach its nerve-wracking finale.”

“Mary SanGiovanni writes with all the skill of a neurosurgeon and all the passion of a Shakespearian actor on a roll.
The Hollower
is a fast building, high tension ride, with a solid mystery peopled with realistic characters thrown into a nightmare situation that grows darker by the minute. One hell of a novel by a writer everyone should keep their eyes on. I think we have a rising star on our hands.”

—James A. Moore, Author of
Under the Overtree

Then Cheryl spied it. A chill like ice water down her back caused her body to shudder.

The poster. The Carmen Electra poster. A beer floated above the wrist, across a paperless chasm where Carmen’s hand used to be. Both eyes had been cut out as well as the mouth, and a tiny strip to either side of her head where her ears would have been, if not covered by her hair.

Her hands—don’t forget, her hands are missing, too
.

Oh God. Someone—someone else really
is
in here
.

Cheryl barely felt her arm yank the door open or her feet carry her to her car. It was like she was watching what she was doing rather than doing things herself. The “out-of-body” Cheryl saw herself scrabble to fit the car key in the lock, and fumble with the handle.

She backed out into the street and straightened the wheel, then looked up to the rearview. Suddenly, everything became vividly clear.

The outline of a head and upper torso stood several feet behind her car, its black clothes blending with the night around it, a hat perched on top of its head. Something was wrong with its face. No, not the face, not exactly. The lack—
yes
, the lack of features that made a face.

This book is dedicated to Laura Mazzarone. The person you are is not the person you stay, but a true friend sees the core of you through the changes and still cares
.

All rights reserved. No part of this book may be reproduced or transmitted in any form or by any electronic or mechanical means, without the written permission of the publisher, except where permitted by law. The scanning, uploading, and distribution of this book via the Internet or via any other means without the permission of the publisher is illegal and punishable by law. Please purchase only authorized electronic editions, and do not participate in or encourage electronic piracy of copyrighted materials. Your support of the author’s rights is appreciated.

This is a work of fiction. Names, characters, places, and incidents are either the product of the author’s imagination or are used fictitiously. Any resemblance to actual persons, living or dead, events, or locales is entirely coincidental.

The “DP” logo is the property of Dorchester Publishing Co., Inc.

Visit us online at
www.dorchesterpub.com
.

A warm and heartfelt thank-you to Heidi Miller, Christopher Paul Carey, Gary Braunbeck, Steven Piziks, and Seton Hill University’s Masters in Writing Popular Fiction Program. Without you, this book literally wouldn’t be here, and it is a far better book for your help.

Thanks to Brian Keene, James A. Moore, and again, Gary Braunbeck for the kind words about the book, and for their advice.

Thanks also to Chris Golden, Tom Monteleone, and Doug Winter for their advice.

Thanks to Frank Weimann and Yvonne Woon, and thanks to Don D’Auria for the chance to do what I’ve always wanted.

Thanks also to the GSHW folks, Meghan Knierim, MJ Euringer, and Paul Zema for the endless support.

Seriously. Can you define it? Perhaps. You can look it up in a dictionary. Talk about the emotional and physical responses it inspires. Toss around some big words and wrap it up with a pretty bow. But do you really
know
fear? I mean intimately. Has fear ever changed you? Have you shaken fear’s hand; bought it a drink or slept with it for a night?

If you’re reading this, then chances are you enjoy being scared. I do, too. I was a horror fan long before I made my living writing horror novels. But think about this for a moment. When was the last time you were really, truly scared by a horror novel or film? I’m not talking about jumping in your seat or sleeping with the bathroom light on. No. That’s not fear. I’m talking about that sweating, pulse-rate-increasing sensation when your ears ring and your head pounds and your butt clenches and the room seems to spin. You can’t breathe, can’t think, and all you want to do is cry, scream, throw up, and laugh
all at once. When was the last time a book or movie made you feel that way?

Once, when I tried to define fear, I wrote the following: “Fear is getting ready to go to a surprise fiftieth anniversary party for your parents, and then receiving a phone call informing you that they were killed in a head-on collision with a drunken driver while on their way to the party. Fear is when you find a lump in your testicles or breast. It’s watching a loved one’s mind be eradicated by the slow rot of Alzheimer’s. It’s learning that your newborn infant has cancer. That the bank is foreclosing on your home. The sudden screech of tires a second before impact. The ‘Breaking News’ alert on your television. The Emergency Broadcast System when it’s not only a test. The knock on your door at three in the morning when your child isn’t home. The realization that you’ve been working in a factory since high school, and that you’re forty, and that you will
never
leave there. . . .”

I still believe this to be true. But I’m older now, and I realize that these are only symptoms of fear. They are not fear itself. It is our reaction to these things—how they impact our life—that causes fear.

But what
is
fear?

If you want to really know fear, then you have to look inside yourself. That isn’t easy for most people to do. Oh, we might pretend to do it. We might hold hands with our support group or counselor and sing “Kumbaya” and read self-help books and look inside our hearts—but deep down inside, we’re just bullshitting. Nobody likes to look deep inside themselves, because they know what’s lurking in those dark corners of the heart. Remember Nietzsche’s adage about staring into the Abyss? Each of us has
our own Abyss. That’s where true fear resides. No matter who you are, you’ve got some darkness inside you. You don’t like to go there, so you hide it. You don’t think about it. And that Abyss? It’s a place where angels fear to tread.

Mary SanGiovanni is no angel. She’s talented, beautiful, intelligent, clever, loyal, appreciative of good video games, fond of champagne, and possesses a wonderful sense of humor, but she is no angel. And unlike the angels, she is not afraid to walk the Abyss. She peers deep into that darkness and pulls things out, exposing them to the light. I can say this with some confidence because I’ve known Mary for many years now. I am her friend, and I am a fan. I’ve had the pleasure of watching her writing grow and develop—from her first short story collection,
Under Cover of the Night
(long out of print but worth the hunt online), to the novel you hold in your hands. And though I’ve written a number of introductions over the years, I can’t remember being prouder to do so than I am for this one. I’ve never forgotten the first time I read her work, and I can guarantee that you won’t forget either. Like most authors of our generation, she was first inspired by Stephen King. But if you look closely, you’ll also see hints of Richard Matheson, Jack Ketchum, Peter Straub, John Carpenter, and others. Don’t misunderstand me. Her work isn’t simply a hodgepodge pastiche of those authors. Not at all. Her voice is strong and uniquely her own. But the influences are there, and they are a wonderful mix—a fantastic, tantalizing cocktail that is sure to please any horror fan.

The Hollower
may seem like just another monster novel. And there’s no shame in that, because we all
love a good monster novel—and this one is indeed good. But the monster in this book can see inside you. It can delve into the Abyss. It destroys its victims from the inside out. It’s not the bogeyman. Not again. You’re far too old for that and there’s no such thing besides. No, it’s not the bogeyman. It’s something much worse. Something primal. This monster
knows
fear.

So does Mary SanGiovanni, and she’s about to share it with you. True fear; not that stuff we tell ourselves is scary. Her characters seem real because they are us—warts and all. Mary knows how you see yourself and how the world sees you. She knows that these are two very different perceptions, and that we aren’t always aware of this. But more importantly, she knows what’s inside us, what lies beneath the mind and spirit, beyond the doors of perception—that dark matter of the soul. That fear.

Turn the page and find out.

A man could only take so much. Max had had enough.

The insomnia, that had been there all along (
They aren’t nightmares if you’re awake, Gladys
, but that had only made things worse). Then, after the first year, he’d slipped back into the stuttering. And he’d always had a bit of a nervous stomach, so the ulcer was no surprise. But the way his hands shook sometimes—like an old man’s—he was too young to have hands that shook like that, wasn’t he? Wasn’t forty-eight too old an age to stutter and too young an age to shake? Sometimes, when he looked in the mirror, he wasn’t so sure.

But not today. Today, he stared at his reflection with approval. The face that stared back at him was older, yes, but content. Almost the kind of content he’d been back before Gladys left him.

He looked good, he thought.
Well, maybe not good, but better
. A dress shirt hugged his build, and he still managed to fill out the pressed jacket. Auburn hair threaded with gray, neatly combed, covered a good
portion of his head. His mustache and beard were trimmed. His lips were a bit dry and cracked yet, but he’d managed to kick the nervous habit of constantly licking them. And so what if his eyes had sunken into bags? They had stopped twitching, and shone with the kind of conviction he hadn’t felt since his first days with the Group.

The Seas by Samantha Hunt
The Bionics (The Bionics Series Part 1) by Michaels, Alicia
My Brother’s Keeper by Malane, Donna
The Penguin Jazz Guide by Brian Morton, Richard Cook
Maid for the Millionaire by Reinheart, Javier
Exit Wound by Alexandra Moore
Fortune's Just Desserts by Marie Ferrarella
The Man of Gold by Evelyn Hervey
Leave it to Eva by Judi Curtin
The Dragon's Descent by Laurice Elehwany Molinari