The House of Cards Complete Trilogy 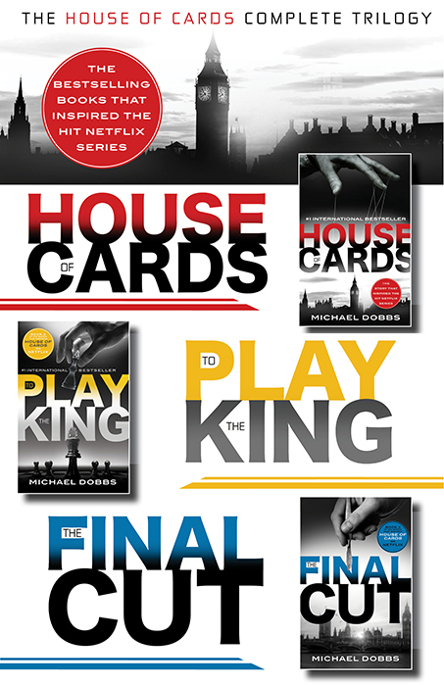 Cover design by The Book Designers

Originally published in 1989 in the United Kingdom by Collins, an imprint of HarperCollins.

PART ONE: THE SHUFFLE

Nothing lasts, not forever. Not laughter, not lust, not even life itself. Not forever. Which is why we make the most of what we have.

Why
waste
a
life
in
search
of
an
epitaph? “Fondly Remembered.” Who other than a half-wit has that chiseled above his head? It is nothing but sentimental incontinence. Let’s face facts, life is a zero-sum game and politics is how we decide who wins, who loses. And whether we like it or not, we are all players.

“Respected By All Who Knew Him.” Another monumental whimper. Not for my gravestone. It’s not respect but fear that motivates a man; that’s how empires are built and revolutions begin. It is the secret of great men. When a man is afraid you will crush him, utterly destroy him, his respect will always follow. Base fear is intoxicating, overwhelming, liberating. Always stronger than respect.

It seemed scarcely a moment since she had made it back home, stumbling up the last step in exhaustion, yet already the morning sun was sticking thumbs in her eyes as it crept around the curtain and began to nestle on her pillow. She turned over irritably. Her head was thick, her feet sore, and the bed beside her empty. Helping finish off that second bottle of Liebfraumilch had been a lousy idea. She’d let down her defenses, got herself stuck in a corner with some creep from the
Sun
who was all acne and innuendo. She’d had to spill the last of the wine down his shirt before he’d backed off. She took a quick peek under the duvet, just to make sure she hadn’t screwed up completely and he wasn’t lurking there. She sighed; she hadn’t even got round to taking off her socks.e

Mattie Storin beat her pillow into submission and lay back once again. She deserved a few extra moments in bed; she knew she wouldn’t get any sleep tonight. Election night. Day of Damnation. Voters’ Vengeance. The past few weeks had been ferocious for Mattie, under siege from her editor, stretched too tightly between deadlines, tossed between excitement and exhaustion. Maybe after this evening she could take a few days off, sort her life out, find a better quality of both wine and man to spend her evening with. She pulled the duvet more closely around her. Even in the glare of the early summer sun she felt a chill.

It had been like that ever since she had left Yorkshire almost a year before. She’d hoped she could leave all the accusations and the anger behind her, but they still cast a cold shadow that followed her everywhere, particularly into her bed. She shivered, buried her face in the lumpy pillow.

She tried to be philosophical. After all, she no longer had any emotional distractions, nothing to get in the way of discovering whether she really had what it took to become the best political correspondent in a fiercely masculine world. Only herself to bother about, not even a cat. But it was difficult to be philosophical when your feet were freezing. And when you didn’t have any clean laundry. She threw back the duvet and clambered out of bed, only to discover that her underwear drawer was bare. She’d miscalculated, forgotten, too much to do and so little time to do any of it, least of all the bloody washing. She searched other drawers, every corner, made a mess but found nothing. Damn, she was glad no man had to watch her do this. She dived into her laundry basket, ferreted around and came up with a pair of knickers a week old but only a day worn. She turned them inside out, stepped into them. Ready for battle. With a sigh Mattie Storin threw open the bathroom door and got on with her day.

As dusk began to settle across the June skies, four sets of HMI mercury oxide television lamps clicked on with a dull thud, painting the front of the building with high intensity power. The brilliant light pierced deep behind the mock Georgian façade of the Party’s headquarters. A curtain fluttered at a third floor window as someone took a quick glance at the scene outside.

The moth also saw the lamps. It was waiting for the approaching night, resting in a crevice of one of the nearby towers of St. John, the graceful church built by Wren in the middle of Smith Square. The church had long been deconsecrated, St. John dismissed, but its four limestone towers still dominated this now godless square in the heart of Westminster. They stared down, frowning in disapproval. But not the moth. It began to tingle with excitement. It stretched its wings, drawn by ten thousand watts and a million years of instinct.

The moth strained in the early evening air, forcing its body along the river of light. It flew above the heads of the growing crowd, beyond the bustle and gathering pace of preparations. Nearer and nearer it flew, eager, passionate, erratic, ambitious, heedless of everything other than the power it was being drawn to, power beyond dreams, beyond resistance. It had no choice.

There was a bright flash as the moth’s body hit the lens a millisecond before its wings wrapped around the searing glass and vaporized. Its charred and blackened carcass gave off little vapors of despair as it tumbled toward the ground. The night had gained its first victim.

Another of the night’s early victims was propping up the varnished bar at the Marquis of Granby, just around the corner from the growing commotion. The original Marquis of Granby had been a popular military figure more than two hundred years earlier and had more pubs named after him than any other figure in the land, but the marquis had succumbed to politics, lost his way, and died in debt and distress. Much the same fate lay in store for Charles Collingridge, according to his many tolerant friends. Not that Charlie Collingridge had ever been elected, but neither had the marquis, it wasn’t the done thing in those early days. Collingridge was in his midfifties, looked older, worn, and hadn’t had a particularly glorious military career, two years of national service that had left him with little more than a sense of his own inadequacy in the order of life. Charlie had always tried to do the decent thing but he was accident prone. It happens when you have a drinking habit.

His day had started early with a shave and a tie, but now the stubble was beginning to show and the tie was hanging at half-mast. The eyes told the barman that the large vodka he had served two glasses ago hadn’t been the first of the day. But Charlie was a genial drunk, always ready with a smile and a generous word. He pushed his empty glass back across the counter.

“Another?” The barman asked, dubious.

“And one for yourself, my good man,” Charlie replied, reaching for his wallet. “Ah, but it seems I’m a little short,” he muttered, staring at a solitary note in disbelief. He searched through his pocket and pulled out keys, a gray handkerchief, and a few coins. “I’m sure, somewhere…”

“The note will do,” the barman replied. “Nothing for me, thanks. It’s going to be a long night.”

“Yes. It will. My younger brother, Hal, you know him?”

The barman shook his head, pushed the drink across the varnish, glad the old drunk was out of money and soon out of his bar.

“You don’t know Hal?” Charlie asked in surprise. “You must.” He sipped. “Everyone knows Hal.” Another sip. “He’s the Prime Minister.”

It’s a very good idea for a politician to have vision. Yes, the Vision Thing, just the ticket. Really useful, don’t you think? Why, on a clear day most politicians can see as far as—well, I know some who can see almost as far as Battersea.

Francis Ewan Urquhart was a man of many parts, a Member of Parliament, a Privy Councilor that gave him the prefix of Right Honorable, a Minister of the Crown, and a Commander of the Most Excellent Order of the British Empire. He was all these things and this was his night, yet still he wasn’t enjoying himself. He was squashed into the corner of a small and stuffy living room, pressed hard up against a hideous 1960s standard lamp that showed every sign of toppling over. He was hemmed in by a posse of matrons who doubled as his constituency workers and who had cut off his means of escape as they chattered proudly about their last-minute mail drops and pinched shoes. He wondered why they bothered. This was suburban Surrey, the land of the A and B social classes in the terminology of pollsters, where passports lay at the ready and Range Rovers stood in the driveway. Range Rovers? The only time they ever encountered mud was when being driven carelessly over front lawns late on a Friday night or when dropping off their little Johnnies and Emmas at their private schools. Canvassing in these parts was held to be almost vulgar. They didn’t count votes here, they weighed them.