Read The House On The Creek Online 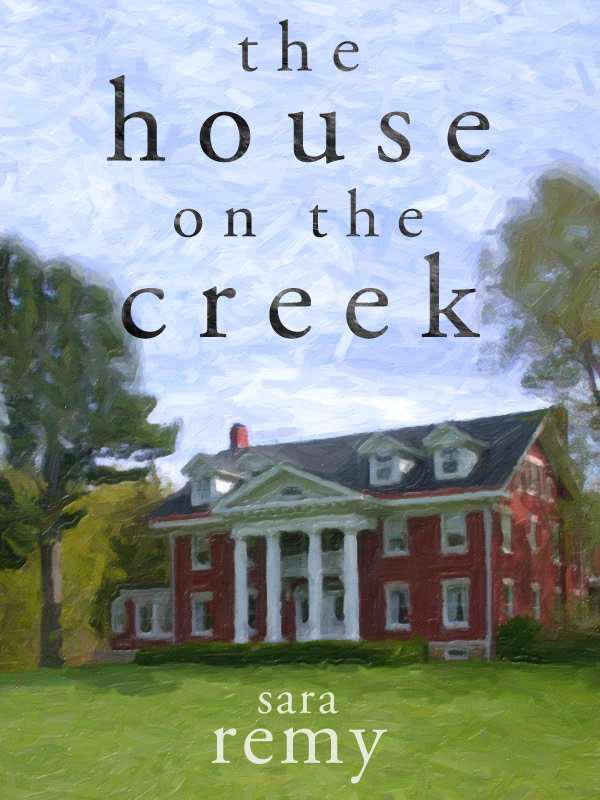 Everett Anderson has returned to
Williamsburg, Virginia, after more than a decade away from his family estate.
Abby Ross has spent the last year renovating that same estate, turning the
dilapidated Anderson mansion into a show piece. Everett and Abby shared a
childhood rife with difficulties and ripe with first love. Now adults, their
paths cross again and sparks fly.

All rights reserved. No part of this publication may be reproduced, stored in a retrieval system, or transmitted in any form or by any means, electronic, mechanical, photocopying, recording or otherwise, without the prior permission of the author.

This is a work of fiction. Names, characters, places, and incidents are products of the author's imagination or are used fictitiously and should not be construed as real. Any resemblance to actual events, locales, organizations or persons, living or dead, is entirely coincidental.

Cover Image
The cover is a painting of the beautiful 'Inn on Crescent Lake' (
http://www.crescentlake.com/
) in Missouri. Many thanks to the owners for allowing the image to be used.

BALANCED ON PRECARIOUS BREEZES
, Abby Ross lifted her arms and flattened her palms, stretching her fingers until they ached. The humid Virginia air sleeked her flesh, and buoyed muscle. The wind lifted briefly, and warm gusts flattened her hair to her scalp. Above her head and below her feet leaves rustled. Abby could smell the rank perfume of the river, and hear the muffled gurgle of the water.

She tensed, straining upward, face lifted to the freedom of the sky. Her shoulders quivered, and her bare toes scraped crumbling mortar, clinging.

She parted her lips and tasted the air. Another gust wrapped about her body, and she rocked, her heart singing. When she opened her eyes she would be far above the clouds.

“Abby Ross! You get down from there!”

Abby swallowed a sigh. She kept her eyes clamped shut and firmly ignored the splashing and shouts below. Something fluttered past her cheek, and she thought she felt tiny wings. A bird, or a butterfly. She smiled.

Another flutter of air and then a sting and a slop. Abby’s eyes flew open. Not a butterfly, or a bird. A clod of moss, perfectly aimed. She gritted her teeth, and wiped the grit from her cheek.

“Come down or I’ll throw another!”

Still rubbing her throbbing cheek, Abby peered down between her toes. A good twenty feet below College Creek swirled, green and brown and almost as deep as its mother, the James River. Trees from the opposite bank overhung the rush. Leaves and vines brushed at the water’s surface. The woods about the Creek were old and deeply shadowed.

In a small square of sunlight a skiff floated. From high in the air the little boat looked bright and clean. Abby knew better. The paint on the hull was cracked and peeling and a hole in the stern was patched with a bit of scavenged plywood. The skiff might be usable, but it surely wasn’t pretty.

The owner of the little boat stood upright and awkward between the oars. He looked as though he might tumble into the Creek at any moment. Abby hoped he would.

“Are you coming down?”

Abby let her arms drop. She settled back onto her heels. A chunk of old brick fell from beneath her feet and tumbled into the water. It broke the current with a splash.

Even from her perch between sky and water Abby could see his sullen scowl. “No way. Come on down. I’ve brought you a birthday present.”

A birthday present. Today was the tenth day of June and overnight Abby had turned fourteen. That was only one year behind Everett Anderson, who thought he knew everything. And maybe he did, but Abby would never tell him so. She preferred to catalog his faults and there were many. When he wasn’t brave and funny and quick with words, he was moody and crass and stubborn and as bossy as a mama hen.

He was also afraid of heights, which meant that Abby was safe on the edge of the decaying boathouse because the boy was too much of a coward to climb up and bring her down.

Still, a
birthday present
. Abby set her fists on her hips and craned her neck, trying to see what Everett might have in his boat. She could tell he was in a temper. She supposed his father had been chasing him with the strap again, which meant he would spend all afternoon and evening on the Creek, hiding.

“What kind of birthday present?” She hadn’t expected any gifts to mark the day. Her mom had baked a pretty poppyseed cake and that was enough. Abby understood that there was no money for something as frivolous as presents.

“Come down and see!”

She could tell from the satisfied tone in his voice that he thought he’d won. Everett knew quite a few of Abby’s own faults and everybody three miles in any direction knew that curiosity was the Achilles in her heel.

Abby rocked in place and considered. Her long hair spiraled on the wind and plastered her brow. Humidity stuck her cutoff jeans to her legs and the tattered T-shirt she wore clung in itchy spots to her skin. If she couldn’t fly, she might as well swim.

She heard a swoosh and a plop as Everett anchored his skiff. Bent at the knees for balance, he waited, peering up. In the scattered sunlight he looked very tan, dark as Mrs. Singh who ran the school library and whose parents had come over from India. But Everett’s hair was light, sun-bleached and nearly white, and it stuck out from his skull like a dandelion flower. His eyes were as muddy green as the Creek, his temper as uncertain as the currents below.

Suddenly suspicious, Abby frowned. “You’re not thinking of kisses, are you?”

In the last month he’d taken a definite liking to her mouth. Abby didn’t mind the fumbling kisses, they were sweet and shy in a way Everett normally was not. Abby had only been kissed twice before in her life, once by Ralph MacGuillivray whose father fished on a boat on the Chesapeake and once by Mr. White, the man who picked up their garbage every other Thursday. She supposed she needed as much practice at the game as anyone and Everett was alway gentle.

“I might be,” Everett replied. The wind took his voice and thinned it. “But not as your present. It’s the real thing. In a box. Wrapped, with a ribbon.”

Abby didn’t see anything that looked like a box in the skiff. And Everett’s family was as poor as her own. But she hadn’t had a real birthday present since she’d turned twelve and her mom had scraped together enough to order a peach colored bathing suit from the Penny’s catalog.

The sun suddenly disappeared behind a high cloud and the breeze turned cool. Goosebumps rose on Abby’s arms and she shivered.

Curiosity killed the cat, Abby knew. But, no matter where she stuck her nose, Abby Ross always managed to land on her feet.

“Coming!” Abby decided. She turned, intending to climb down the side of the boathouse as she always did, monkey-like, fingers and toes wormed into split bricks. Then she paused, struck by something as hard to catch as the breeze, and glanced back over her shoulder.

College Creek looked very far away, down below, swirling around the curve of the bank. She could hear the faint slosh of the water against Everett’s skiff, and see the bright puff of his hair and the shift of light and shadow across his face.

Abby turned back and stood again on the edge of the sagging roof. Mortar cracked and fell, raining down in a rattle and splash.

She stretched up on her toes and lifted her arms over her head. The breeze stung her eyes.

Today was the tenth day of June and Abby Ross had gained another year. The sun was warm, school was out, and a boy had brought her a birthday present. In a box, with a ribbon. Maybe, the day would be perfect.

Abby arched her back and spread her fingers. A perfect day to fly.

THE BOAT HOUSE HAD HARDLY CHANGED
in twelve years. The Creek ran quite a bit deeper and wider. Brown water had swallowed up much of the far bank and licked in pools about the base of the boat house itself. Abby had to shove back kudzu and sumac as she walked. The soles of her boots sank inches into the mud. Tiny pink and white wild flowers grew up between the trees and here and there she spotted a drooping hedge bright with red berries.

She mad her way cautiously through undergrowth until she could touch the old building. Standing against the foundation, she cocked her head and squinted up along brick walls. The boat house seemed as sturdy as she remembered, two stories high and crumbling on the outside, but ruler straight and strong. Except for the roof, which still sagged, but hadn’t given in to the elements and fallen.

“Used to be they knew how to build strong.” She patted a warm brick.

The structure didn’t tower the way it had in her childhood, but she supposed it wouldn’t. She had grown. Her bones had lengthened into adulthood. She’d manage to top five feet, barely. At fourteen she’d feared she would be stuck forever just above four.

Abby hesitated and looked up into the sky. The trees had grown tall, and she could see less of the sun than she remembered. The place was definitely cooler, definitely shadier. But on a warm summer afternoon, shade wasn’t such a bad thing.

She leaned against the boat house and untied her boots. Stripping shoes and socks, she stood barefoot in the wet soil and regarded the brick walls. Twelve years gone and she was no longer a child. Could she do it?

Of course she could. Was it wise?

But her fingers and toes found the old cracks easily and before she knew it she was halfway up the wall. The brick brushed her khaki shorts, leaving brown stains, and a branch streaked her white shirt with sap. Abby didn’t notice.

At the top she hoisted herself over the edge of the roof and onto clay shingles. She sat very still, holding her breath, waiting to see if the roof would protest. But the singles held, even when she rose to her feet and tiptoed across the top of the boat house to her old perch.

She looked up and around first, admiring oak and dogwood and the ash with their green as grass leaves. She sucked in the fragrance of the Creek, and brushed bangs from her eyes. Then she took a deeper breath and looked down.

Only Uni by Camy Tang
Savage Girl by Jean Zimmerman
The Wedding Wish (Summer Grooms Series) by Baird, Ginny
The Accidental Lawman by Jill Marie Landis
The Land of Painted Caves by Jean M. Auel
Rocks in the Belly by Jon Bauer
Warriors of God by Nicholas Blanford
Murder at Breakfast by Steve Demaree
My Son's Story by Nadine Gordimer
The Ruby Tear by Suzy McKee Charnas