Read The House With the Green Shutters Online

The House With the Green Shutters 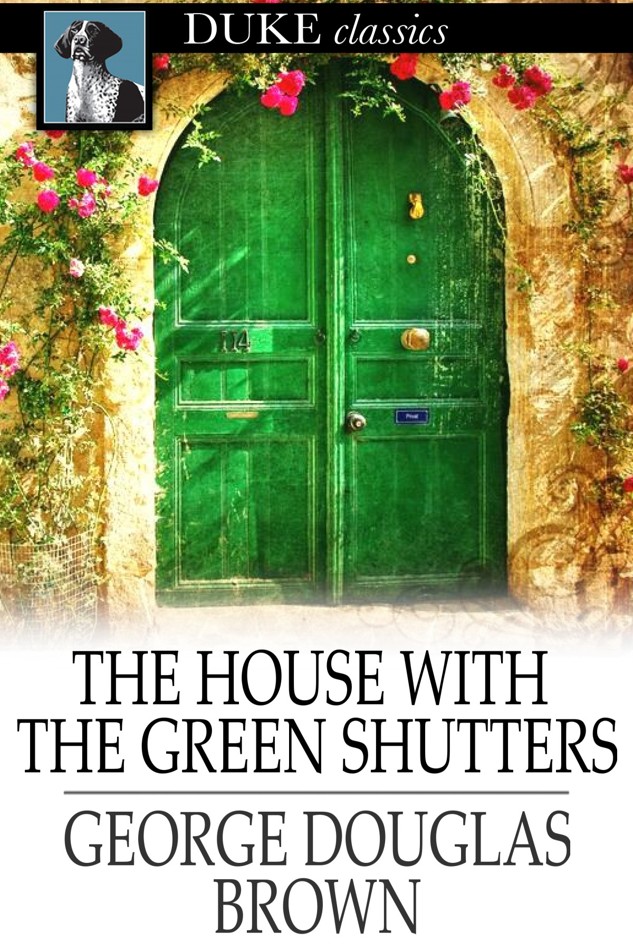 THE HOUSE WITH THE GREEN SHUTTERS
* * *
GEORGE DOUGLAS BROWN

The frowsy chambermaid of the "Red Lion" had just finished washing the
front door steps. She rose from her stooping posture and, being of
slovenly habit, flung the water from her pail straight out, without
moving from where she stood. The smooth round arch of the falling water
glistened for a moment in mid-air. John Gourlay, standing in front of
his new house at the head of the brae, could hear the swash of it when
it fell. The morning was of perfect stillness.

The hands of the clock across "the Square" were pointing to the hour of
eight. They were yellow in the sun.

Blowsalinda, of the Red Lion, picked up the big bass that usually lay
within the porch, and carrying it clumsily against her breast, moved off
round the corner of the public-house, her petticoat gaping behind.
Halfway she met the hostler, with whom she stopped in amorous dalliance.
He said something to her, and she laughed loudly and vacantly. The silly
tee-hee
echoed up the street.

A moment later a cloud of dust drifting round the corner, and floating
white in the still air, showed that she was pounding the bass against
the end of the house. All over the little town the women of Barbie were
equally busy with their steps and door-mats. There was scarce a man to
be seen either in the Square, at the top of which Gourlay stood, or in
the long street descending from its near corner. The men were at work;
the children had not yet appeared; the women were busy with their
household cares.

The freshness of the air, the smoke rising thin and far above the red
chimneys, the sunshine glistering on the roofs and gables, the rosy
clearness of everything beneath the dawn—above all, the quietness and
peace—made Barbie, usually so poor to see, a very pleasant place to
look down at on a summer morning. At this hour there was an unfamiliar
delicacy in the familiar scene, a freshness and purity of aspect—almost
an unearthliness—as though you viewed it through a crystal dream. But
it was not the beauty of the hour that kept Gourlay musing at his gate.
He was dead to the fairness of the scene, even while the fact of its
presence there before him wove most subtly with his mood. He smoked in
silent enjoyment because on a morning such as this everything he saw was
a delicate flattery to his pride. At the beginning of a new day, to look
down on the petty burgh in which he was the greatest man filled all his
being with a consciousness of importance. His sense of prosperity was
soothing and pervasive; he felt it all round him like the pleasant air,
as real as that and as subtle; bathing him, caressing. It was the most
secret and intimate joy of his life to go out and smoke on summer
mornings by his big gate, musing over Barbie ere he possessed it with
his merchandise.

He had growled at the quarry carters for being late in setting out this
morning (for, like most resolute dullards, he was sternly methodical),
but in his heart he was secretly pleased. The needs of his business were
so various that his men could rarely start at the same hour and in the
same direction. To-day, however, because of the delay, all his carts
would go streaming through the town together, and that brave pomp would
be a slap in the face to his enemies. "I'll show them," he thought
proudly. "Them" was the town-folk, and what he would show them was what
a big man he was. For, like most scorners of the world's opinion,
Gourlay was its slave, and showed his subjection to the popular estimate
by his anxiety to flout it. He was not great enough for the carelessness
of perfect scorn.

Through the big green gate behind him came the sound of carts being
loaded for the day. A horse, weary of standing idle between the shafts,
kicked ceaselessly and steadily against the ground with one impatient
hinder foot, clink, clink, clink upon the paved yard. "Easy, damn ye;
ye'll smash the bricks!" came a voice. Then there was the smart slap of
an open hand on a sleek neck, a quick start, and the rattle of chains as
the horse quivered to the blow.

"Run a white tarpaulin across the cheese, Jock, to keep them frae
melting in the heat," came another voice. "And canny on the top there
wi' thae big feet o' yours; d'ye think a cheese was made for
you
to
dance on wi' your mighty brogues?" Then the voice sank to the hoarse,
warning whisper of impatience—loudish in anxiety, yet throaty from fear
of being heard. "Hurry up, man—hurry up, or he'll be down on us like
bleezes for being so late in getting off!"

Gourlay smiled grimly, and a black gleam shot from his eye as he glanced
round to the gate and caught the words. His men did not know he could
hear them.

The clock across the Square struck the hour, eight soft, slow strokes,
that melted away in the beauty of the morning. Five minutes passed.
Gourlay turned his head to listen, but no further sound came from the
yard. He walked to the green gate, his slippers making no noise.

The "
Eih
" leapt like a sword, with a slicing sharpness in its tone
that made it a sinister contrast to the first sweet question to his
"pretty men." "
Eih?
" he said again, and stared with open mouth and
fierce, dark eyes.

"Hurry up, Peter," whispered the gaffer, "hurry up, for God sake. He has
the black glower in his een."

"Ready, sir; ready now!" cried Peter Riney, running out to open the
other half of the gate. Peter was a wizened little man, with a sandy
fringe of beard beneath his chin, a wart on the end of his long,
slanting-out nose, light blue eyes, and bushy eyebrows of a reddish
gray. The bearded red brows, close above the pale blueness of his eyes,
made them more vivid by contrast; they were like pools of blue light
amid the brownness of his face. Peter always ran about his work with
eager alacrity. A simple and willing old man, he affected the quick
readiness of youth to atone for his insignificance.

"Hup, horse; hup then!" cried courageous Peter, walking backwards with
curved body through the gate, and tugging at the reins of a horse the
feet of which struck sparks from the paved ground as they stressed
painfully on edge to get weigh on the great wagon behind. The cart
rolled through, then another, and another, till twelve of them had
passed. Gourlay stood aside to watch them. All the horses were brown;
"he makes a point of that," the neighbours would have told you. As each
horse passed the gate the driver left its head, and took his place by
the wheel, cracking his whip, with many a "Hup, horse; yean, horse; woa,
lad; steady!"

In a dull little country town the passing of a single cart is an event,
and a gig is followed with the eye till it disappears. Anything is
welcome that breaks the long monotony of the hours and suggests a topic
for the evening's talk. "Any news?" a body will gravely inquire. "Ou
ay," another will answer with equal gravity: "I saw Kennedy's gig going
past in the forenoon." "Ay, man; where would
he
be off till? He's owre
often in his gig, I'm thinking." And then Kennedy and his affairs will
last them till bedtime.

Thus the appearance of Gourlay's carts woke Barbie from its morning
lethargy. The smith came out in his leather apron, shoving back, as he
gazed, the grimy cap from his white-sweating brow; bowed old men stood
in front of their doorways, leaning with one hand on short, trembling
staffs, while the slaver slid unheeded along the cutties which the left
hand held to their toothless mouths; white-mutched grannies were keeking
past the jambs; an early urchin, standing wide-legged to stare, waved
his cap and shouted, "Hooray!"—and all because John Gourlay's carts
were setting off upon their morning rounds, a brave procession for a
single town! Gourlay, standing great-shouldered in the middle of the
road, took in every detail, devoured it grimly as a homage to his pride.
"Ha, ha, ye dogs!" said the soul within him. Past the pillar of the Red
Lion door he could see a white peep of the landlord's waistcoat—though
the rest of the mountainous man was hidden deep within his porch. (On
summer mornings the vast totality of the landlord was always inferential
to the town from the tiny white peep of him revealed.) Even fat Simpson
had waddled to the door to see the carts going past. It was fat
Simpson—might the Universe blast his adipose—who had once tried to
infringe Gourlay's monopoly as the sole carrier in Barbie. There had
been a rush to him at first, but Gourlay set his teeth and drove him off
the road, carrying stuff for nothing till Simpson had nothing to carry,
so that the local wit suggested "a wee parcel in a big cart" as a new
sign for his hotel. The twelve browns prancing past would be a pill to
Simpson! There was no smile about Gourlay's mouth—a fiercer glower was
the only sign of his pride—but it put a bloom on his morning, he felt,
to see the suggestive round of Simpson's waistcoat, down yonder at the
porch. Simpson, the swine! He had made short work o'
him
!

Ere the last of the carts had issued from the yard at the House with the
Green Shutters the foremost was already near the Red Lion. Gourlay swore
beneath his breath when Miss Toddle—described in the local records as
"a spinster of independent means"—came fluttering out with a silly
little parcel to accost one of the carriers. Did the auld fool mean to
stop Andy Gow about
her
petty affairs, and thus break the line of
carts on the only morning they had ever been able to go down the brae
together? But no. Andy tossed her parcel carelessly up among his other
packages, and left her bawling instructions from the gutter, with a
portentous shaking of her corkscrew curls. Gourlay's men took their cue
from their master, and were contemptuous of Barbie, most unchivalrous
scorners of its old maids.

Gourlay was pleased with Andy for snubbing Sandy Toddle's sister. When
he and Elshie Hogg reached the Cross they would have to break off from
the rest to complete their loads; but they had been down Main Street
over night as usual picking up their commissions, and until they reached
the Bend o' the Brae it was unlikely that any business should arrest
them now. Gourlay hoped that it might be so; and he had his desire, for,
with the exception of Miss Toddle, no customer appeared. The teams went
slowly down the steep side of the Square in an unbroken line, and slowly
down the street leading from its near corner. On the slope the horses
were unable to go fast—being forced to stell themselves back against
the heavy propulsion of the carts behind; and thus the procession
endured for a length of time worthy its surpassing greatness. When it
disappeared round the Bend o' the Brae the watching bodies disappeared
too; the event of the day had passed, and vacancy resumed her reign. The
street and the Square lay empty to the morning sun. Gourlay alone stood
idly at his gate, lapped in his own satisfaction.