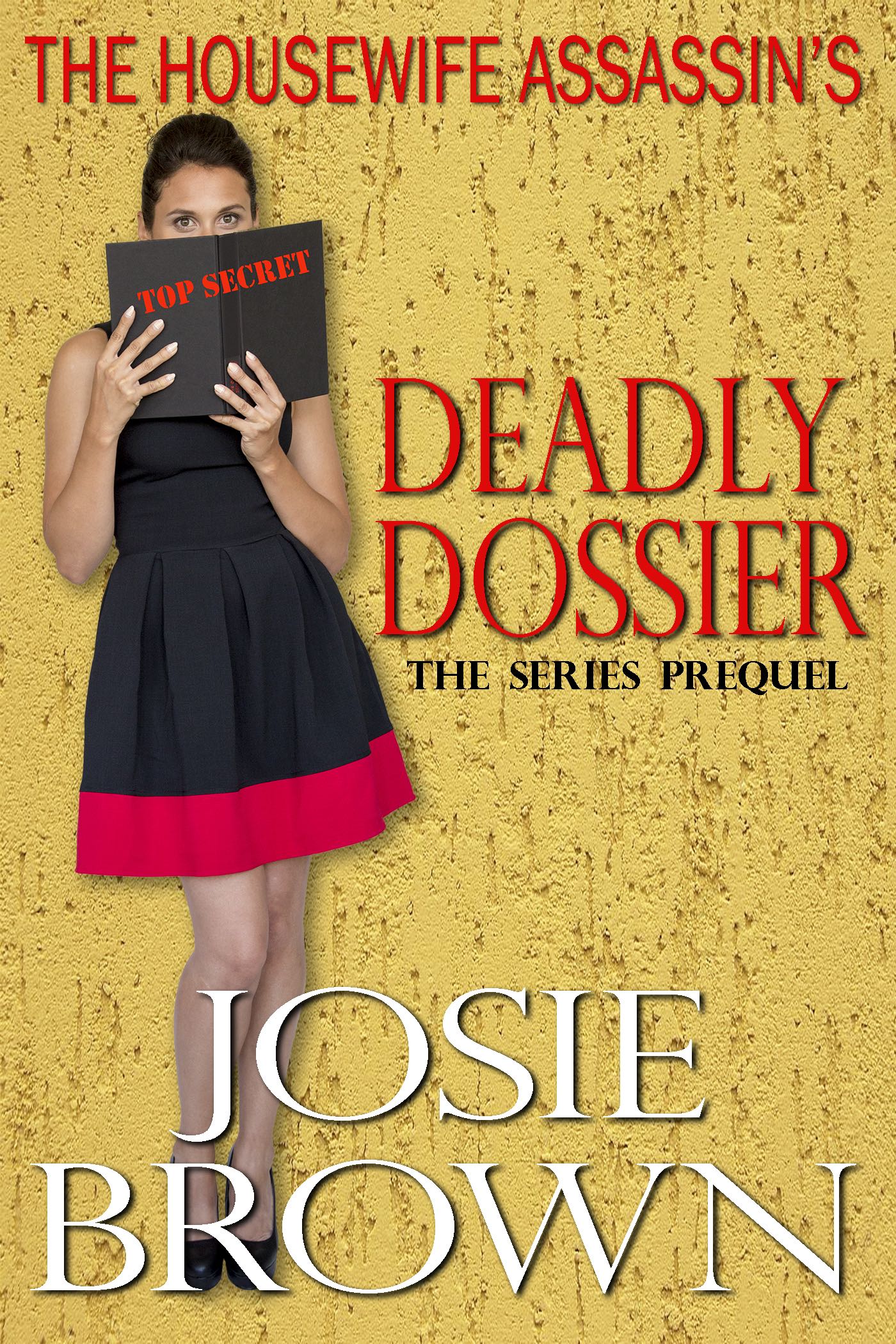 Chapter 1 A Hard Man is Good to Find

Chapter 5 The Spy Who Came in from the Cold

HOW TO REACH JOSIE

NOVELS IN THE HOUSEWIFE ASSASSIN SERIES

OTHER BOOKS BY JOSIE BROWN

Chapter 1
A Hard Man is Good to Find

In espionage parlance, a “hard man” is an assassin: someone whose profession is to kill those stealing others’ secrets or spouting inconvenient truths.

Should one appear on your doorstep with a mission to exterminate, any attempt to outrun your caller will earn you a bullet in the back.

Think you’ll stave off the inevitable with an offer of “Coffee, tea, or me?” He may take you up on all three, but the bottom line is that his mission comes first.

Then again, so does your lust—for life.

Instead, invite him in and offer him a cuppa joe, along with something that will even the playing field:

A sprinkle of lye, as opposed to creamer, followed by going off the grid for good.

Carl Stone almost missed his flight out of Vancouver because his target refused to die.

It should have been an easy hit. The target, a portly Canadian defense contractor with a heart condition, was selling his country’s missile launch codes—not only to an international terrorist group, but to the Chinese as well.

A traitor was one thing. A traitor who double-dipped on what was supposed to be exclusive intel was an accident waiting to happen.

Fat Ass’s life insurance policy was about to be cancelled.

The man’s medical charts showed that his enlarged prostate sent him to the john at least twice an hour. And since he was a stickler for getting to his departure gate at least an hour before wheels-up, all Carl had to do was wait until Fat Ass was hit with the urge to take one more bathroom break. After the extermination, Carl would hop his own flight home to Los Angeles, which was scheduled out of YVR around the same time as Fat Ass’s flight.

He didn’t have to wait long. Five minutes after Fat Ass checked in with the gate attendant, he went in search of the nearest men’s room.

Carl was a step ahead of him. He was dressed in a janitor’s uniform, so no one questioned him as he rolled a mop and bucket in front of the door and placed an OUT OF ORDER sign on the handle. After he rousted the two guys zipping up in front of the urinal, he went back outside so that he could greet Fat Ass with the assurance that “the floor should be dry by now, so go on in.”

Fat Ass barely acknowledged him with a nod, let alone a thank you.

Carl left the sign on the doorknob and followed Fat Ass into the restroom with the mop and rolling bucket, locking the door behind them.

Fat Ass was mid-whiz when Carl pricked him in the back of his thigh with the needle filled with succinylcholine—probably not the best time to do so, because Fat Ass’s response was to turn around, dick in hand.

“What the hell!” they shouted in unison—Carl because Fat Ass sprayed his very expensive John Lobb brogues with urine, and Fat Ass because, let's face it, that needle hurt like hell.

Fat Ass was shocked, but Carl was angry. The shoes were a thou a pair! Still, he resisted the urge to punch the guy in the throat, which would cause him to double over, at which point Carl would bash his head against the wall and toss him onto the tile floor to stomp to a bloody pulp—

But only because that would defeat the purpose of making the hit look like an accidental death, as per his client’s instructions.

By now, Fat Ass was onto the fact that Carl was there to kill him. Having no lethal weapon, but fully aware that Carl was concerned about the condition of his shoes, he brandished his spraying organ in his assailant's direction.

In the best of all possible worlds, by now the guy would have fallen backward into Carl's arms so that he could drag him into one of the stalls and heave him up on a toilet for some harried traveler to find. An autopsy would reveal he'd had a heart attack when he sat down for a grunt.

“Die already, you son of a bitch," Carl hissed at the man as he dodged the spray as best as he could. If his fancy footwork couldn't save his shoes, maybe it would wear out Fat Ass, who seemed to have the constitution—not to mention the pissing power—of a rhino.

Carl’s light-footedness seemed to do the trick. Fat Ass's chest must have started tightening up on him because one hand dropped limply to his side.

Noting that the Canadian was leaning back, he positioned himself to catch the slumping hulk—

Only to have to leap in front of the man in time to cradle him before he fell to his knees or cracked his head on the tile.

Metaphorically speaking, with death comes relief. But in this case, Fat Ass also relieved what was left in his bladder all over Carl's shoes.

His damp shoes squeaked as he hauled the body into the nearest stall and shoved it up onto the john. By bending Fat Ass's knees and positioning them far enough apart, the body might just resist the gravitational pull to fall to the floor long enough for Carl's plane to be wheels up.

He had just mopped up the puddles of piss when he heard the sob. He froze. Was it coming from Fat Ass's stall? How the hell could that be?

He stayed perfectly still. Minutes went by that seemed like hours.

A flushing sound came from one of the next stalls.

Shit, Carl thought. He slowly removed the knife concealed in his trouser leg and flicked it open. His steps toward the stall were slow and silent.

Out popped a head.

It belonged to a boy. He couldn’t be any more than nine years old.

Still, the boy had heard everything. Maybe he'd even seen what happened through the crack between the door and the stall.

Having a witness to one of his hits was a first for Carl.

The boy shook while Carl thought through his options. In this case, a knife wasn’t necessary. He could pinch the boy’s nostrils and suffocate him in less than two minutes. But if he killed the kid, it would be too much of a coincidence that two people had died in the same restroom on the same day.

I’m no monster, Carl told himself.

For the first time since he’d become a hard man, he had a chance to prove it.

No one had jiggled the restroom door’s lock, so the sign was certainly keeping everyone away. But surely the kid’s parents were looking for him by now and beginning to panic as well. Carl knew he’d be freaking out if it were one of his children. He had two kids of his own: his daughter, Mary, was seven. His son, Jeff, would be five tomorrow. This was one of the reasons he had to make it home tonight.

He wondered what Jeff would do in the same situation.

Just at that moment, the boy raised his head. His eyes sought out Carl’s.

Then the boy reached out to him. He held something in his hand—a Wolverine action figure. “You…can have it, if you want.”

Carl stared down at it. Finally he muttered, “Thanks.” He kneeled down so that he was eye level with the boy. “What did you see?”

The boy blinked once and pursed his lips. “Not…nothing,” he whispered.

The boy nodded. Carl guided him to the door, opened it and followed him out.

The boy ran off to the left. Carl bent down and pretended to tie his shoe, but he watched as a woman, perhaps three gates down, shouted at the boy. He turned. Finding her, he ran into her arms. The look in her eyes went from frenzy to relief. Whatever he said to her had her looking back toward the restroom.

By then, Carl was buried deep in the throng of travelers crisscrossing the terminal.

A moment later, he was in the janitor’s closet, where he changed back into his business suit.

Carl’s Air Canada flight to LA was out of YVR’s international terminal. On the way, he passed several Canadian Air Transportation Security guards. To make his flight, he knew he’d have to make a run for it. Instead, he forced himself to walk as if he didn’t have a care in the world.

When he got to his departure gate, an Air Canada agent was already in the process of locking the door to the jetway. Carl practically threw his boarding pass at the woman as he ran past her.

Once in his seat, he pulled out a cell phone and texted his client contact, EW, the signal that the extermination went off without a hitch:

Have a nice day!

But because this wasn’t exactly true, Carl sent a second text, this one to his employer, the black-ops organization known as Acme Industries. It read:

No doubt the airport’s security cameras would validate the young boy’s tall tale of a janitor assassin. Carl’s boss, Ryan Clancy, would have to alert the Canadian Security and Intelligence Service about the hiccup in the mission.

The last thing either Carl or Ryan would want is for the client—an organization known as the Quorum—to know something had gone wrong. Otherwise, the Quorum would never trust Carl again. After all, he had been hired as a freelancer.

He’d done so in order to infiltrate the organization, at the behest of Acme’s first and foremost client, the Central Intelligence Agency.

Noting the evil eye from the flight attendant who had already given him a hard time for holding up the plane, he snapped off his phone.

He slept on the three-hour flight home. Those he exterminated never haunted his dreams.

But this time, he dreamt of the little boy.

Winning Dawn by Thayer King
Hammer of Angels: A Novel of Shadowstorm by G. T. Almasi
Caleb (The Unseen Series Book 1) by K.M. Thompson
Two-Thousand-Pound Goldfish by Betsy Byars
When Falcons Fall by C. S. Harris
Devil's Knot: The True Story of the West Memphis Three by Mara Leveritt
The Restless Shore by Davis, James P.
The Country Doctor's Choice by Maggie Bennett
A is for Arsenic by Kathryn Harkup
Bitter Wild by Leigh, Jennie