The Humbled (The Lost Words: Volume 4) 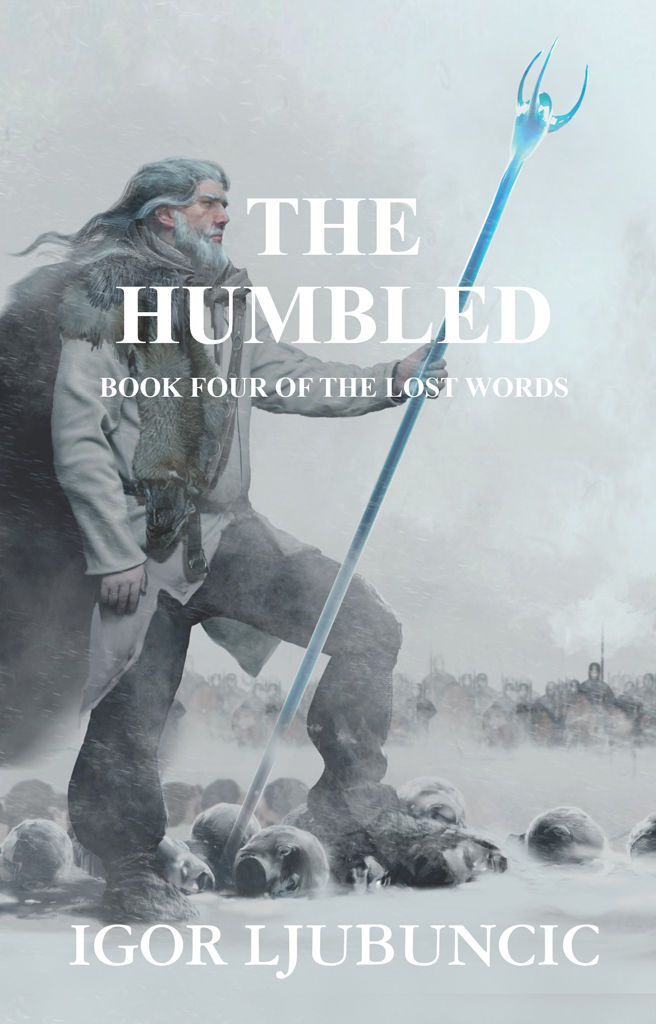 Book Four of The Lost Words

You know the drill. Rolling credits: Erin, the CreateSpace editor, so my writing does not come across a total fiasco; Anton Kokarev of kanartist.ru for yet another kick-ass cover; and as always, my wife, who makes sure you get to read a less boring version of the original manuscript.

C
alemore rubbed his eyebrow, stepped off a moss-grown stone, and walked toward the seething white mass that was his army. Camped about three weeks north of Marlheim, the eastern force was waiting for him. No, not just a force. A nation.

The whole of Naum was coming against the realms, men, women, children, their livestock. The first wave was comprised mostly of fighting men, but there were would be thousands more coming in their wake, bringing all their belongings and tools and food and seeds for crops. Coming back to their rightful land. The few thousands of years of their exile did not really matter much.

Naum was a colder place than the realms, and it was taking his folk time to realize that. Some still clung obstinately to their thick leathers and furs and sweated heavily in the early summer heat. Others had adapted to the climate, enjoying the sun, exploring the nature.

One of the lookouts spotted him. Calemore was still too far to see clearly, but he knew his cloak gave him away. The lookout whistled, and the camp began transforming. It was as
if a gust of wind whipped against forest-floor litter. It shifted, rippled, tiny branches and dried leaves flying.

A collective breath of anticipation and well-practiced fear rolled through the human mass of his followers. Men abandoned their tasks and leisure and snapped to attention before their undisputed master, before their almost deity. Well, for them, he was a god. In every way that mattered.

Calemore’s boots crunched over the summer grass in an unnamed valley in the far reaches of the realm called Caytor. He wondered if this region had ever seen a city official come to collect taxes or remind people of their allegiance. South, he had seen a few remote villages, but it was quiet and peaceful and wild in these northern reaches. Animals naturally shied away from humans, but here, they did not have that victim-like behavior like their kin that got them hunted and killed elsewhere. Calemore glimpsed a wolf staring at him from the fringe of a birch forest to the left, its shaggy head almost hidden among the ferns. There was a glint in those eyes, a glint he could admire. Their gazes locked. Calemore blinked. The wolf turned and fled, smart animal.

As he came closer, the soldiers and craftsmen went prostrate. For a tiniest moment, he was surprised by their reaction. He had gotten so used to the nonchalant ignorance of the people of the realms that he had forgotten the abject terror he inspired in his followers.

The fear spread around him in a wave as his troops stopped their lives to acknowledge his arrival. Calemore walked with the bloodstaff in his hand. Younger men had never seen that weapon, not since he had given it to Damian’s avatar all those years back, but the fathers and grandfathers in the lot sure remembered. He saw their faces contort, and their expressions pleased him.

He plowed on, and men slithered from his path, almost like ants, crab walking backward on all fours. Calemore let his pale eyes wander over the massive camp, inspecting the order, the readiness. He had not intended to bring the people of Naum to the realms, but it seemed he had to replay the old war to the very last detail, unfortunately. His desire to become a god,
the
god, would not be achieved through peaceful means. He was being forced to exterminate the inhabitants of the Old Lands. He had wished to have their faith and fear, but some things just weren’t meant to happen.

There were two armies of Naum marching, converging. This eastern force was going to strike into Caytor. The other one was advancing through Eracia. They would meet in the Safe Territories. By then, Calemore intended to see the one surviving deity killed. If not, the force would move farther south and destroy the third realm. A simple, brutal plan.

In the last war, a similar initiative had failed him. This time, his chances were much better. His enemy was weak, fragmented. His enemy had no magical weapons, few or no Special Children, no recollection of the events of the old war. It would come down to simple brute strength, and for that task, his slave nation was most perfectly suited.

He stopped where he deemed to be the center of this chaotic hive. He gestured, and the men slowly rose, their clothes and weapons and tools creaking and clanging. It sounded like a hill stretching its bones. Not a single pair of eyes in that crowd would meet his. He almost challenged them, but it would be pointless. Tradition was such a beautiful motivator.

He waited until the news of his arrival spread and the leaders of the force were found. Soon enough, the throng parted to let the elders of the tribes come forward. They looked extremely apprehensive. They had not seen him for a few years now,
ever since he’d left to complete his father’s treacherous affair, and they did not know what to expect. Even though they had prepared all their lives for the march south, the reality of being right there, right then stunned them.

Calemore did not know their names. He did not have to. Whatever he ordered always got done, quickly, with precision, blindly followed. After spending his time with Nigella, he found the notion of such devotion boring. The emotional struggle and all the little doubts were so much more fun.

The most senior elder knelt before him, bowing his head. “We await your mercy.”

Calemore was not in the mood for rituals. “You are here. Good. Now, you must proceed south and destroy the people of the Old Land. Just kill them.” He raised his hand. “But you will not harm my plaything or her child.” Was that what Nigella was, a plaything? Wasn’t she?

“How will we know her?” the elder whispered.

Calemore grinned. “I have marked her, and her son. Not only will you keep her safe, you will provide her with whatever she needs. She will be allowed to do as she pleases and go where she pleases. You will give her anything she wants. If she asks you for the hide off your bones, you will give it to her.”

The elder nodded. Around him, other tribe leaders imitated the gesture. It wasn’t much to ask of them. For someone who knew nothing about free choice, the sacrifice was meaningless. He felt disappointed. The taint of a bespectacled woman and her big teeth was coursing through his veins.

His eyes roamed. “Have you agreed on the division of land?”

“We have,” another elder replied. “We have marked the territory for our tribes.”

“Good.” Calemore did not want his conquest to go sour when his followers decided to bicker over the ownership of captured villages and fields. They might be his nation, but they were still humans, brimming with jealousy, greed, and pettiness.

He noticed an extended hand holding a small, bulging cloth satchel, slightly trembling from the weight of what was inside. Calemore accepted it, undid the knot, and pinched some of the contents between his fingers. It was fine-grained dust, made from the crushed stone of the dead magical barrier markers he had once erected to keep himself safe. A symbol of his strength, vanity, defeat, and patience. He upended the satchel, and the dust winnowed out, blown into the pale, hard faces of his elders. They squinted and wrinkled their noses, but said nothing.

This time, he would make sure there were no mistakes.

A loud rumble scattered his thoughts. It took him a moment to realize what it was. Thunder. He glanced up. The summer sky was dappled with low clouds, some of them streaked with slate gray, scudding on high winds. He thought he saw a patch of brilliant white bloom inside one of those puffy sky turds. Soon enough, a mockery of a rain erupted, brief and hot. Thick drops slammed the earth, few, heavy, random, and then the rain stopped altogether. No honest Old Land farmer would bless that piss trickle.

However, there was a gasp of delight and wonder in the crowd around him. Calemore remembered his first rain after thousands of years of isolation. None of his men had ever seen precipitation other than snow and ice. For them, this was almost a miracle. He let the cheers continue unabated, let them indulge in a moment of almost childish joy.

I am getting too soft for my own good
, he thought. Nigella was poisoning his mind, for sure. Then again, maybe softness was what he needed to win his campaign. His cruelty had not seen him victorious all those centuries back. Perhaps he needed guile and restraint more than he needed butchery. He stroked the smooth, cool length of fused rock-hard glass that made the rod that was the bloodstaff. On the other hand, he yearned to use the weapon in large-scale combat. He wanted to level towns and destroy entire armies with its magical power. He lusted for it. After so long, he deserved some revenge.