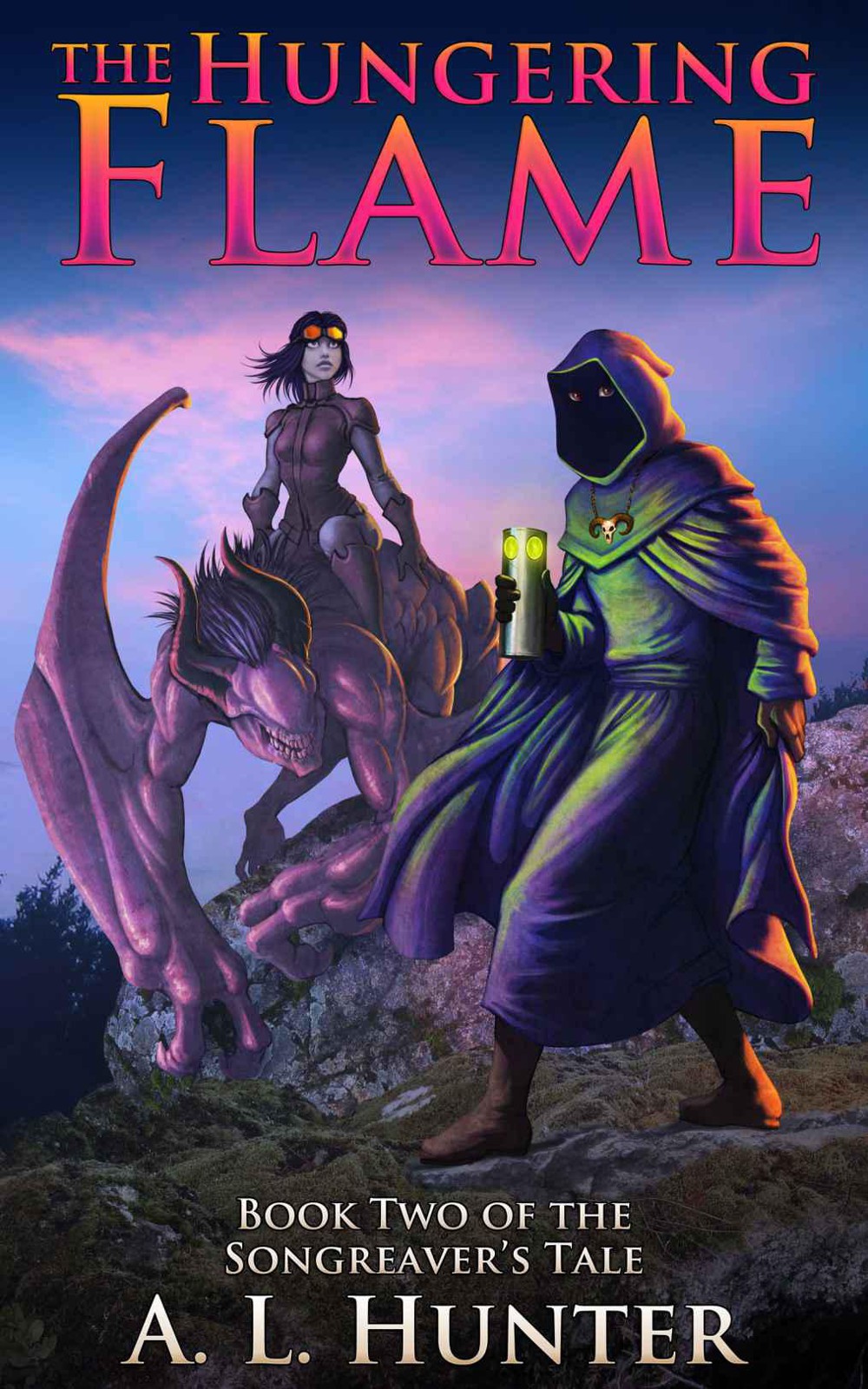 Discover other works by Andrew Hunter at
Freemancer.com

The wind that brought the rain still smelled of the ocean ten miles inland. Garrett and Marla sat together inside the broken hulk of an old wagon, listening to the staccato rhythm of water dripping down from the trees onto the ragged canvas tarp above their heads. Garrett’s fingers and toes ached with the chill through his gloves and boots, even though his purple robe clung to his skin, damp, and uncomfortably warm.

Marla’s dark hair lay flat against the sides of her face, and her eyes seemed distant and sad as she gazed into the misty forest across the road. Her gray traveling garb blended against the shadowy bed of the overturned wagon. Her pale face and hands shone in ghostly contrast.

Garrett shifted his feet, catching the sole of his boot on the edge of something half-buried in the mud. He pulled the curved dagger
that Cenick had given him for his birthday
from his belt. He stuck the tip of the blade into the ground beside the little wooden box and pried it up.

He wiped the dirt away with the thumb of his glove to reveal the faded image of a painted hen and a trio of chicks on the lid. He tried to open it, but could not grip it properly without first pulling off his leather gloves. Even now, he hesitated, but Marla had seen his scars before. He stripped off his glove and grasped the lid, twisting it off with a dry pop.

The scent of cinnamon filled the makeshift shelter. Garrett sneezed.

Marla smiled at him, and they shared a laugh.

“
I wonder if they’re all right?
”
Garrett said.

“
I meant the people that owned this wagon.
”

Marla shrugged.
“
We aren’t very far from the coast. They could have made it to Stuggs on foot and caught a barge to Wythr. They’re probably there now, like the other refugees.
”

“
Yeah,
”
Garrett said, carefully replacing the lid of the spice box and setting it atop an old crate.

“
I’m sure your family is somewhere safe as well,
”
she said,
“
and, after the war, when your town is rebuilt, they’ll go back, and you can find them.
”

“
You can even introduce them to your pet zombie.
”
She grinned.

Garrett laughed.
“
I wish you could meet them,
”
he said.

“
What do you imagine they’d think of their son associating with a vampire?
”
Marla asked with a wicked little grin. Her teeth seemed only a little more pointed than any other girl’s, but then she was only fifteen.

Marla looked away, her long fingers brushing a lank strand of hair from her pale cheek.
“
Garrett,
”
she said.

“
Can a necromancer ever bring back someone from the dead if... if they don’t have a body?
”

She looked at him then, and Garrett saw the gleam of impossible hope in her eyes. He hated to have to take it away from her.

“
Even if you had a body,
”
he said,
“
necromancy doesn’t really bring the person back. We just animate the dead body. It only seems alive, but it’s more like a machine. It’s not the person it was before.
”

“
But you said Caleb remembered things from his life,
”
she said,
“
like that he was a thief before.
”

Garrett squirmed a little.
“
Yeah, sort of, I think,
but I may be wrong.
And anyway, they can’t talk, and it’s hard for them to move.
”

Marla closed her eyes and shivered.
“
I wish the night would come soon.
”

“
Yeah,
”
Garrett sighed, though he wished instead that the clouds would part long enough to let him glimpse the sun. It had been more than three years since he had seen a blue sky. The eternal cloud that hung over the tomb city of Wythr reached far beyond its borders in the rainy season.

The two dire wolves outside lifted their heads from their paws and sniffed the air. Marla’s wolf whined.

Heavy paws padded down the leaf-choked road as Warren the ghoul returned, riding atop his pony-sized wolf.

The shaggy ghoul dismounted, patting the wolf
named
Hauskr on the back.

“
You miss me?
”
Warren asked, showing h
is long teeth in a broad grin. T
he short gray fur that covered his body dripp
ed
with rain.

“
Did you find anything?
”
Garrett asked.

The three great dire wolves shook themselves dry as the companions gathered their gear. Marla pulled her hood over her head to block what little of the fading daylight made it through the rain clouds.

Cold raindrops pattered on the hood of the old rain
cloak Marla had given Garrett to wear. It was a bit small for him and did not close all the way in the front, but her scent lingered on it, and so, he did not complain.

The damp, musky scent of Ghausse the dire wolf quickly overwhelmed the dry, flowery scent of the vampire girl. At least the beast did not growl at him this time when he approached and climbed onto its back.

Warren and Marla mounted Hauskr and Reigha, and they set out to find the source of the dead smell farther up the road.

The gray clouds darkened to a somber black, but the wolves’ pace did not slow. Garrett, with his human eyes, resigned himself to his usual blindness in the company of friends who preferred to travel in the dark. He pressed his face into Ghausse’s thick fur to shut out the dizzying sensation of racing through the blackness with only the dim silhouettes of trees rushing past on either side.

A cool evening breeze carried away the last of the rain, leaving only the sound of the wolves’ breathing and the wet thump of heavy paws on the damp ground.

Warren barked a short laugh.
“
Still fresh!
”
he called out.

The wolves as well seemed to catch the scent, and Ghausse’s long legs stretched beneath him as the wolves sprinted forward.

They crested a rise in the road, and the wolf’s pace slowed. Garrett raised his face, sensing light ahead, and the smell hit him with the shifting of the breeze, dead bodies and burned flesh.

A dying bonfire sprawled out into the road, heaped with charred bodies in blackened armor. In the ruddy glow of the embers, Garrett made out a dozen, unburned bodies strewn across the path. These men wore silvery mail hauberks and blue doublets bearing the symbol of a rampant white stag.

“
And Chadiri,
”
Warren added, gesturing toward the fire.

Ghausse’s belly rumbled beneath him, and Garrett saw the gleam of anticipation in Warren’s red eyes.

Garrett had seen ghouls feed before, but he’d never quite gotten used to watching them devour the dead. He slipped off Ghausse’s back and joined Marla in her investigation of the slaughter, trying to ignore the sound of cracking bones as the ghoul and three wolves gnawed at the Astorran corpses.

“
A dozen knights,
”
Marla said, surveying the battlefield. She walked over to the dwindling fire and pursed her lips in thought.
“
I’m counting nearly thirty Chadiri dead in the fire, but, of course, that is only a guess.
”

Marla made a non-committal noise.
“
Chadiri are very skilled as well. Something is...
”
She paused and knelt to dig something from the fire-hardened mud.

Marla stood up, holding a small object that gleamed golden in the firelight.
“
A signet ring,
”
she said, examining it closely,
“
Garrett, this belongs to a member of the Astorran royal family!
”

“
The Chadiri probably didn’t know it was there.
”

“
So it slipped off someone’s finger in the fight?
”

“
Possibly,
”
she said,
“
or perhaps it was intentionally removed and cast away to hide the identity of the bearer.
”

“
So one of these knights was someone really important?
”
Garrett asked.

Marla looked at the bodies again, wrinkling her nose at the sight of Warren’s feeding habits.
“
I don’t think so,
”
she said,
“
I think the Chadiri took the person prisoner.
”

Garrett felt a cold knot in his stomach.
“
What can we do?
”
he asked.

Marla shook her head.
“
I don’t know. It may already be too late. The prudent thing to do would be to keep searching for the Gloaran army. They might be able to help.
”
Her voice sounded uncertain.

Garrett chewed his lip.
“
It doesn’t feel right,
”
he said.

“
I think we have to try to help them, whoever they are,
”
Garrett said.

“
About a hundred horses...
they continued up the road
,
”
she said, pointing into the night,
“
Well, Garrett, are you ready to take on a Chadiri legion?
”

“
Do wot now?
”
Warren mumbled through a mouthful of Astorran knight. He and three red-faced dire wolves looked up from their meal, blinking at them in the firelight.

Nestled in a grassy clearing, dozens of large red tents stretched in orderly rows. Armored men walked among the tents with several two-man patrols circling the perimeter. The light of
many
large campfires lent an orange glow to the low-hanging night clouds above.

“
You wanted to fight the Chadiri,
”
Garrett whispered as he crouched between Warren and Ghausse in the thicket above the Chadiri camp.

“
Yeah, but I wanted to
win
the fight!
”
Warren hissed.

“
There he is!
”
Garrett pointed at a spot near one of the fires where a single prisoner sat, bound to a wooden stake.

“
Who is this guy anyway?
”
Warren asked.

“
I don’t know,
”
Garrett said,
“
but he must be pretty important. Anyway, there’s no telling what the Chadiri will do to him if we don’t help him.
”

Warren groaned.
“
Aren’t you the least bit scared?
”
he asked,
“
I mean, of the impending death down there?
”

Secret Confessions: Down & Dusty - Frankie (Novella) by Jackie Ashenden
Mr. Darcy Takes a Wife by Linda Berdoll
Hell's Revenge by Eve Langlais
Unleashed: The Deepest Fears Lie Within (Secrets of the Makai) by Kerr, Toni
Motive for Murder by Anthea Fraser
La reina de la Oscuridad by Margaret Weis & Tracy Hickman
Love's Taming (The Love's Series) by Jordan, Maryann
Because of You by Rochelle Alers
I Was a Non-Blonde Cheerleader by Kieran Scott
Tempting His Mate by Savannah Stuart