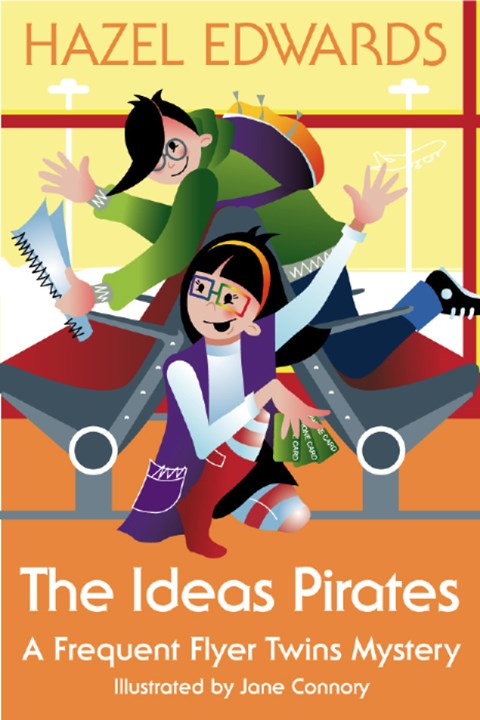 Illustrated and designed by Jane Connory.

âSlipper orchid' was the clue. But is it a flower, a pirated cassette or a group of smugglers?

Along the way, they discover some idea pirates and solve a mystery.

Airport security changes fast. If our Frequent Flyers travelled tomorrow, there would be new regulations and electronic devices.

Some of their past mysteries were solved without the technology we have now.

Also in the Frequent Flyers Series, by Hazel Edwards.

Illustration and design by Jane Connory.

All electronic rights reserved. No part of this book may be reproduced, stored in a retrieval system, or transmitted by any means, electronic, mechanical, photocopying, recording, or otherwise without written permission from the publisher. Although every precaution has been taken in the preparation of this book, the publisher and author assume no responsibility for errors or omissions. Neither is any liability assumed for damages resulting from the use of the information contained herein.

âSlipper Orchid,' muttered a man behind Amy. He pushed a slim, square package into her hand.

But the man had vanished. Opening the package, she looked at the disc. âWhat's this for?'

The man had melted into the quickly moving passengers. Families waited for relatives to come or go. Business people exchanged cards. Some used their laptops or mobiles. Music boomed from electronic gift shops.

But the man had vanished.

âHe said “awkward” didn't he? You ARE awkward sometimes,' said Christopher in that way brothers talk.

âAre you sure? Lots of background noise here. What's on the e-disc?'

Excitedly Christopher looked at the cover. No labels. âWe'll have to find a player. Did you pack yours?'

He went on fast -forward when he got excited.

Amy pretended to be cool. âIt's in with my baggage. But I've got my I- audio with me.'

âThere must be a player around here somewhere.'

The AIRPORT ELECTRONIC man wasn't keen on them looking at his display . And he didn't want them to play their own disk

âDon't touch that. It's my demo equipment.'

Christopher tried again. âCan't you demo this e-disc to us?'

Salespeople often thought children were users not buyers. This time, he was right. Christopher pushed back his glasses. He needed time to think. He felt in his bum bag. Grandma's âlucky' money was in there. Next term's school project was on âFlying” and he needed more photos.

âCan I re-charge my cam?'

âOkay. We'll shop somewhere else.' Christopher re-zipped the bum-bag. Meanwhile Amy wondered if that man had mistaken her for someone else? Had the e-disc been stolen? Maybe there was a secret message on it? They needed to play it!

âSo much security today!' noticed Amy. What were the uniformed officials looking for? Was someone planning a protest? Was an important person travelling through? Had there been a tip-off ?

Some Indian passengers wore turbans. Passengers pulled baggage on wheels. Travellers busy going somewhere that was important to them, wanted others to know that . So they talked loudly.

Why had the mystery man left this e-disc with her? Where did he want it taken? Did he say â awkward ... slip you ... or orchid slippers? And what did it mean?' Amy shifted her purple and aqua backpack to a more comfortable spot.

âPerhaps it meant shoes like the ones Mum bought in Little India . Or orchid shaped slippers?'

âDid he mean the flowers or something else? Was it a clue?'

It was a mystery, luckily. And the twins preferred to spend their airport time solving unusual problems.

âSorry Madame. Do you have two tickets?' The booking clerk looked embarrassed.

At the front of the queue was a very big lady, carrying a red and white plaster gnome wearing a T-shirt.

The garden gnome had a big painted smile and VERY white teeth. Printed on its T-shirt was GNOME MESSAGES.

The twins were at the back of the queue, but they could hear everything.

âWhy do I need two tickets?'

âWhy? I am travelling alone to Sydney.' She looked down with a slight smile.

The clerk looked even more embarrassed.

âEr...So that you will have plenty of room on the flight. Plenty of room to sit It's a long flight from Singapore to Sydney. The basketball team has already booked out the bulkhead seats. They need room to stretch their long legs.'

The clerk nodded. â Your name is on your passport. And I've seen you on Singapore television.'

âI'm Fifi ... the famous model. I'm known all over Asia and in Europe. My BIG T-shirts with gnome slogans are my trademark. Gnomes are now fashionable, thanks to me!'

âThe famous model ...' echoed the clerk. âD' you mind if I call my supervisor?'

Christopher nudged Amy. âShe's the one who wears the Gi-normous Fifi shirts on the TV. ads.'

Amy was busy examining her package for clues. No stamps. No sender and it wasn't addressed to anyone on the front. And yet the mystery man had chosen her. Why?

When Christopher nudged her again ,Amy looked up and recognised Fifi.

People who liked shopping loved Singapore shops. Mum hated shopping so they bought next year's clothes all at once. Amy liked browsing in Arab Street for Malay jewellery, but Mum didn't like browsing anywhere. Fashion parades didn't interest her.

Impressed by Fifi's shape, Christopher was working out how to draw the ex-model.' She'd be wonderful to draw! All curves. And if the garden gnome sat on her lap, I'll draw that too.'

To get a closer look, Christopher grabbed Amy's autograph book, took one of his top pocket pens and pushed forward.

âExcuse me. Could I ask a favour? Could I have an autograph for my sister? She wants to be a model when she grows up.'

Fifi's teeth dazzled as she signed the autograph book. âThere you are dear. Maybe you'll be like me when you grow up.'

Amy didn't say anything. Yesterday's shopping had put her off buying clothes for life. Interestingly Fifi looked very comfortable with her size, not like some fat people.

âI must move on. Being famous takes so much of my time.'

âThank you very much.' Christopher looked carefully at the squiggles. They looked like tiny graffiti.

âFifi' was hard to read in those squiggles.

âI don't want to be a model when I grow up. I'm going to be Prime Minister.' hissed Amy. âAnd it doesn't matter what you wear then, even if you're a MODEL Prime Minister!'

Christopher pretended not to hear. He was sketching.

âGive me back my autograph book.'

Amy often collected signatures at airports. Her autograph- book was always ready in her backpack. Once she got the whole Australian cricket team to sign.

Other times she collected retro-phone cards, stamps, stickers or badges. Her favourite badge was âBAN EVERYTHING' She wore it on her back jeans pocket until she sat on the pin!

The airport newsagency was nearby. A man was scanning on a machine just inside the door. His friends stood around offering advice. He didn't seem to have the right money. Or maybe the paper was too big? Perhaps they didn't understand the language of the instructions on the machine? There was some shouting in what sounded like German. Christopher could recognise the language sounds, but not what they said. He squinted at the SYD label on one man's briefcase, trying to read his name. âBEN something.'

âDumkopf!' spluttered the man with the map looking across at Christopher.

For a moment, Christopher thought the man was talking to him! He felt embarrassed at getting caught watching so closely. âSorry.'

âHe's talking to himself, not to you,' muttered Amy.' Anyway, scanners have a language of their own. You have to speak nicely to them. He hasn't learnt that yet.'

âYou just follow the instructions,' said Christopher. âThey've even got pictures showing you what to do.

Did you hear about that guy who wanted a copy of an old CD? He put the real CD on the photocopier and pressed the button. He got a black photocopy of the shape of the round CD.'

Amy laughed. âWouldn't that mess up the CD? I think “dumpkof “means stupid in German.' Amy had a jigsaw mind of facts because she read so fast.

Losing interest in the copiers, Amy returned to her mysterious e- disc which had music .

Usually a cover had a name and a band. This one didn't even say who recorded it. Carefully she opened the cover again.Inside was the flimsy, gleaming disc. Holding it by the sides, she lifted it out carefully.

Last Bridge Home by Iris Johansen
Seduced by His Touch by Tracy Anne Warren
But Thomas Aiken Is Dead - Part I by McKechnie, Alex
BitterSweet (Book Two) (The Blood Moon Chronicles) by June Spears
Enjoy Your Stay by Carmen Jenner
Naming Maya by Uma Krishnaswami
Out of the Blue by Helen Dunmore
Lea's Menage Diary by Kris Cook
The Pawn (Shattered Series Book 1) by Ashton, Chloe D.
The Gift-Giver by Joyce Hansen