Read The Idiot Girl and the Flaming Tantrum of Death Online

The Idiot Girl and the Flaming Tantrum of Death 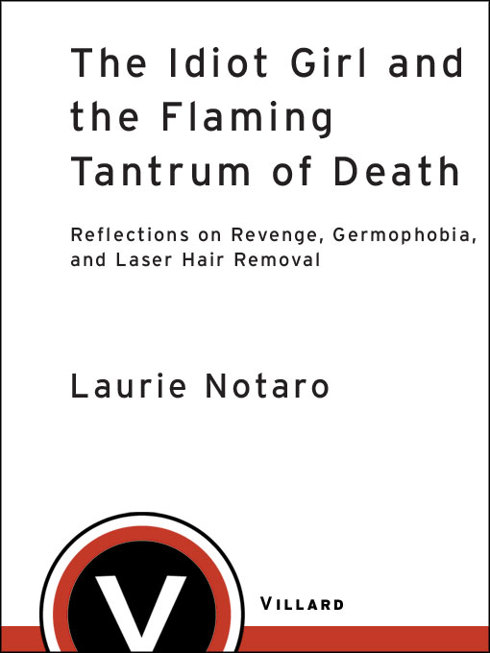 Death of a Catchphrase

Happy Birthday and the Element of Surprise

Leaving, but Not on a Jet Plane

A Kung Fu Person, a Tollbooth, and a Swinging Bridge in Less Than Twenty-four Hours

The Idiot Girl and the Flaming Tantrum of Death

I
t could not
have sounded more divine.

Tall, shadowy pine trees; a bubbling creek with clear, pure water; meadow upon meadow of swaying wildflowers; temperature in the seventies, and a cute little log cabin with a loft at a lodge.

When my husband suggested we get away for the weekend and celebrate my birthday in the White Mountains, I couldn’t have been more enthusiastic.

To Arizonans, the White Mountains are an incredible escape a mere four hours’ drive away; to the rest of the world, they’re the place where logger Travis Walton said he got sucked up by a UFO and then disappeared for five days while aliens put things in places unseemly. To me, they were a place with no phones, no television sets, no computers, no fax machines, just a cabin with a wood-burning stove, a feather bed, and a forty-degree drop in temperature, which I especially needed since I had just received a zipper burn on the back of my neck from my dress by engaging in the mortally dangerous activity of going to get the mail while it was still sunny outside.

When I told my mother about my birthday plans, she simply said, “Must be a popular place. Your sister is heading up there, too, but at least her boyfriend sprang for a fancy hotel. Why won’t your husband pay for a hotel? Why are you staying in an old shack with a woodstove? How can that be fun? I bet you’ll leave with a nice case of lice.”

“We’re not staying in a shack. It’s a cabin with a feather bed and a loft,” I said, thinking that she was one to talk. I’ve spent a great deal of time and effort in therapy trying to forget the majority of my family summer vacations. They were spent driving roughly far enough into the desert and away from our house that we couldn’t physically run back to it after it was discovered that my parents had only sprung for one hotel room for the five of us and it was 117 degrees outside, making escape far too sweaty an option. To make matters even more closely resemble the comfort level of Guantanamo Bay, my mother consistently struck a claim for one of the double beds as we entered the room by throwing her purse on it, digging out her bottle of Tylenol and her pack of Winstons, and then sprawling out with her eyes closed and her hand over her head. This not only left the rest of the family one bed for cramped quarters but created an undeniable bounty of opportunity for pinching, slapping, and pushing between my sisters and me and sometimes even my dad, to which my mother would respond by roaring from her yacht of a bed two feet away, “SHUT UP all of you! If you people haven’t noticed, I’m on VACATION!”

We were additionally blessed as a slight, cool drizzle fell like mist as soon as we drove into the lodge driveway and then checked in. As I opened the door to the White Mountains cabin, it was exactly as I had pictured it—well, outside of the shag rug and the black fur of mold in the shower. My husband sighed peacefully, put his hands on his hips, and looked around.

“A whole weekend of this!” he commented excitedly. “Can you even believe it? Listen. I don’t hear a thing but that slight prattle of rain hitting the tin roof.”

“Wow,” I said, smiling wide. “To think, four hours ago, the seat belt left a burn so extensive we could have added a side of A.1. and called it dinner.”

I unzipped my bags and unpacked my array of snack options, then stood gazing out the window at the steady, patient dribble of rain. My husband spread out on the couch and cracked open a book. “This is the life,” he said with a smile before he started to read.

“Wow,” I said, still staring out the window. “You gotta love this rain.”

“Yep,” my husband said without looking up from his book.

I walked around the cabin, rolled around on the feather bed, and when I was done, it was still raining.

“Two-thirty,” my husband answered, and returned to his book.

“Hmmmm,” I pondered aloud. “Are you hungry?”

“You just ate a pack of Twinkies, four bags of chocolate Twizzlers, and twenty-two servings of Funyuns on the way up here,” he said, not looking at me. “I got full just by watching you.”

I walked around the cabin again, checked for stains on the sheets, and to see if the people before us had left any foreign hairs in the bathroom, because even though my own bathroom may be filthy as a truck stop, I at least know the filth is mine and from where it has emanated. Strange, unknown filth is another story altogether, and I am saddened to report that an errant hair—belonging to neither my husband nor myself—made a rather obnoxious appearance at the bottom of a hot tub in our hotel room and absolutely ruined our wedding night. My new husband, however, was not grossed out enough to refrain from pointing the video camera at it and pressing the record button, leading to an odd and uncomfortable situation later when my family viewed our honeymoon tape, thus forcing my mother to drag me into the kitchen to say, “That in there is a little sick. It’s not too late. The pope will understand. You can still walk away.”

After not finding any hobo hairs in the shower, I climbed up to the loft and looked at the rain from the window up there.

“What time is it?” I called from the loft.

“Two thirty-two,” my husband answered with a sigh.

“Are you hungry yet?” I asked.

“Let’s play a game,” my husband suggested. “We could play ‘I’ll Give You a Dollar for Every Hour That You Don’t Speak a Word.’”

“Hmmm, that’s odd,” I said. “Across the way at the lodge, a person on the third floor just looked directly at me and then shut their curtains really fast, like in a huff!”

“Why are you spying on people, Mrs. Kravitz?” he replied. “Please come down from there before we find out that the person you’re spying on is a sniper.”

“I’m not spying,” I insisted. “I’m just…soaking in my surroundings. I’m taking in the scenery, and discovering who our fellow lodgers are.”

“You know, this is how Hitchcock movies start,” he warned me. “And then before you know it, I’ll be the one running through a cornfield being stalked by a crop duster because my wife had to spend her birthday peeking in other people’s windows.”

“I saw something in the window and I looked as an automatic reflex.
You know that I am curious by nature,
” I said. “If it was a pubic hair,
you’d
be the one taking pictures of it by now.”

“And you were the one who said, ‘Don’t worry, my parents will think it’s funny,’” he responded. “Now they look at me like I showed them a movie of what happened in that hot tub before we even got there.”

“Oh, shut up, they totally thought it was funny,” I said as I climbed down the ladder from the loft. “I’m going to take a walk around the pond, see what I can see.”

“You mean spy,” my spouse said.

“I mean
see,
” I iterated. “There’s a little lake next to the lodge, I’m just going to go down and poke around.”

“All right, fine, I’ll come with you,” he said, putting his book down. “I don’t want to get a knock on the door in an hour telling me that you’ve lodged yourself in a dumbwaiter or gotten stuck in a tree trying to get a better view inside of someone’s room, Harriet the Spy.”

As we left the cabin, I noticed a sweet scene near the lake as a young mother lifted her rather new infant up out of the stroller and faced the baby toward the water. “Look at that new mom showing her baby the ducks and the ducklings!” I exclaimed. “How cute. Isn’t that cute?”

“It’s all adorable,” my husband said as he put his arm around me tenderly.

“Did you just see that?” I gasped as I pointed to the third-floor window of the lodge. “The curtain in that window whipped closed the second I looked up there!”

“I will give you
two
dollars for every ten minutes you don’t peek into someone else’s room,” my husband said. “Or dessert! I’ll buy dessert!”

“Oh, well, that will be nice,” I replied. “Fat Girl Eats Gargantuan Chocolate Cake Alone While Husband Looks On in Silence and Other Diners Think to Themselves, ‘Poor Husband with the Fat Wife. Why Can’t He Stop Her? She’s Just Getting Fatter.’”

This issue, in itself, has been a thorn in our marriage, because although I married a truly, really, super-nice guy, he has a defect. An unforgivable, loathsome, irritating defect. To me, it’s horrifying and at times nearly repulsive, but I’m just being honest here by admitting that my husband is not a Dessert Guy.

I know.
Even though it finally put me at ease by blowing a hole in my theory that he might be gay (listen—if you’ve played beard as many times as I have, both knowingly and unknowingly, you’ll find yourself looking at even your dad with doubtful eyes), there’s something about a man who would carelessly abandon his wife when it came to her favorite course. There’s something about a man who can simply too easily declare himself a traitor when the waiter finally brings “the little menu,” begging off because he’s “too full,” “would rather have another beer,” or is “not really in the mood.” I mean, I just want to scream, flick him on the head with the back end of a spoon, and inform him in a quiet, yet strong (hissing) voice, “Let’s really think about this. When’s the last time I asked you to do something for
your
benefit?”

The White-Luck Warrior by R. Scott Bakker
Death on a Branch Line by Andrew Martin
Cake: A Love Story by J. Bengtsson
Seducing an Angel by Mary Balogh
The One For Me - January Cove Book 1 by Hanna, Rachel
How to Entice an Earl by Manda Collins
Good Vibrations by Tom Cunliffe
The Bronze Horseman by Simons, Paullina
Erin M. Leaf by Joyful Devastation
Jealousy by Jessica Burkhart