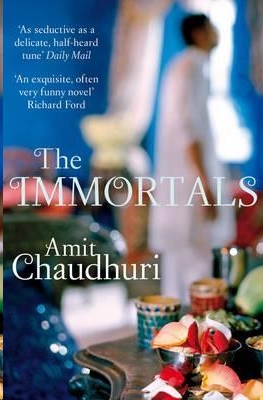 A
MIT
C
HAUDHURI
was born in Calcutta in 1962 and brought up in Bombay. He is a graduate of University College, London, and was at Balliol College and later, as Creative Arts Fellow, at Wolfson College, Oxford. He has published four previous novels, and a collection of short stories, and his work has appeared in various publications, including the
London Review of Books
, the
Times Literary Supplement
,
Granta
and the
New Yorker
. Winner of the Betty Trask Award, the Commonwealth Writers Prize for Best First Book, the Encore Award for Best Second Novel and the
LA
Times Book Prize for Fiction, he lives in Calcutta with his wife and daughter, but spends some of the year in the UK, where he is Professor of Contemporary Literature at the University of East Anglia. He is also a Fellow of the Royal Society of Literature, and an acclaimed musician and singer.

A Strange and Sublime Address

D. H. Lawrence and ‘Difference’:
The Poetry of the Present

St. Cyril Road and Other Poems

Clearing a Space:
Reflections on India, Literature, and Culture

The right of Amit Chaudhuri to be identified as the author of this work has been asserted by him in accordance with the Copyright, Designs and Patents Act 1988.

Visit
www.picador.com
to read more about all our books and to buy them. You will also find features, author interviews and news of any author events, and you can sign up for e-newsletters so that you’re always first to hear about our new releases

My days are pallid with the hard pummelling of work,

my nights are incandescent with waking dreams.

Arise from the clash of metals, O beautiful one, white fire-flame,

may the mass of matter become wind, the moon become woman,

may the flowers of the earth become the stars of the sky.

free the eternal in the unfading forgiveness of the moment,

May the body become mind, the mind become spirit, the spirit unite with death,

T
HE NOTES OF
Bhimpalasi emerged from a corner of the room. Panditji was singing again, impatient, as if he were taking his mind off something else. But he grew quite immersed: the piece was exquisite and difficult. He’d composed it himself seven years ago.

From not far away came the sound of traffic; the roundabout, bewildering in its congestion. Bullocks and cars ground around it. The bulls looked mired in their element; the buses and dusty long-distance taxis were waiting to move. The car horns created an anxious music, discordant but not indifferent.

The Panditji wasn’t there: he’d died two years ago, after his third cardiac seizure. They had rushed him to Jaslok Hospital; on the way, in the car, he’d had his second heart attack. He had died in Jaslok, to the utter disbelief of his relatives: they hadn’t thought that he’d been admitted to a hospital to die. Now, his presence, or his absence, persisted in the small seven-hundred-square-feet house. The singing had come from the tape recorder, from the tape the grandson had played accidentally, thinking it was a cassette of film songs.

‘Yeh to dadaji ke gaane hai,’ remarked the boy, recognising his grandfather’s singing; was he surprised or disappointed? Next to him hung a portrait of his dadaji, enlarged from a photograph taken when he was fifty-seven. The face was an austere one, bespectacled, the oiled hair combed back. It was the face of – by common consensus in the family – a great man. The large forehead had been smeared with a tilak, as if someone had confused the portrait with a real person.

Already, the Panditji was becoming a sort of myth. It wasn’t as if a large number of people knew him; but those who did divulged their knowledge with satisfaction. How well he sang Malkauns, for instance; how even Bade Ghulam Ali hesitated to sing Malkauns at a conference in Calcutta after Panditji had the previous day. How Panditji was a man of stark simplicity, despite his weakness for the occasional peg of whisky in the evening.

But it was certain that Panditji was proud, a man of prickly sensitivity. He had been a man silently aware of the protocol between student and teacher, organiser and performer, musician and musician. If slighted or rebuffed, he sealed off that part of the world that rebuffed him.

This severity had probably cost him. There was a story of how Lata Mangeshkar wanted a guru to train her in the finer points of classical music, and of how she had thought of him, Ram Lal, having heard his abilities as a teacher praised highly. ‘You must call her, Panditji,’ said a well-wisher. ‘She is waiting for your call.’ Panditji did not call. ‘She should call me,’ he said. ‘If she wants to learn from me, she will call me.’ The call did not come. In the meantime, Amir Khan telephoned her and said that he was at her disposal. Word spread quickly; Lata turned to the distinguished ustad; and Amir Khan became known as the man who had taught Lata Mangeshkar the subtler intricacies of classical music.

And yet, for all that, his reputation as a teacher had remained intact when he died; like something small and perfect, it had neither been subtracted from nor added to. People outside the family remembered him less and less; if asked ‘Where did you learn that beautiful bandish?’ they might say in a tone of remembrance, ‘Oh I had learnt that from Pandit Ram Lal,’ for people used to drift in and out of Panditji’s life, and some became students for brief spells of time.

Shyamji’s life was to be different. This was a simple determination, but it was not a conscious plan.
Consciously
, Panditji’s life was the ideal life; when Shyamji mentioned it, it was as if he were speaking of a saint, and not of his father. That was all very well; but it was a life that could not be repeated.

Tonight was a night of upaas and jagran, an absurdity enforced ritually by the women. Shyamji succumbed meekly to being a witness. The abstention from food by the women, the singing of bhajans till dawn: these were necessary observances. Done repeatedly, they were meant to lead to betterment. Instead, they led to acidity, and a grogginess and lack of focus that lasted two days. But they were undertaken in light-hearted camaraderie.

The children and the men were fed. Then night came; and they began to sing the bhajans. The children had fallen asleep without any prompting, as usual, in the midst of the chatter, their eyes closed in the bright light of the tube-light. The low, droning singing began; not tuneless, because this was a family of musicians, but strangely soothing. Half-asleep, Shyamji watched his wife and his sister and, with them, an older daughter, Neha: they were about to lull him to sleep. Nisha, his youngest daughter, had desperately wanted to stay awake, and join the chorus; but she had fallen asleep at a quarter to eleven. His mother sat in a corner, in a plain white sari, with an absent look, yet entirely alert. Shyamji had a dream into which was woven the sound of the chorus; in which his father was also present, both as a living person and as a portrait, hanging in a reddish light. This dream, about the vicissitudes of Shyamji’s life, continued for a long time, taking one shape, then another. When he woke briefly, it was dawn; the women had vanished: they must have gone to bed, probably after having taken a glass of milk to break the fast. The room was silent, except for the noises coming in from outside.

Late one evening the door must have been left ajar – early evenings the doors were anyway wide open, to let in a continual trickle of visitors; people coming in and going out – but late one evening when the door was ajar, the rat must have got in. No one had noticed. But it was Neha who saw it later that night, as she was stepping out of the bathroom. It had jumped out, and scooted behind the pots in the kitchen once again. Expectedly, Neha almost fainted. It was really a bandicoot; cats were scared of them. They ran down the gutters and, at night, scurried down the narrow passage that connected the houses of the colony. They had the aggressiveness and urgency of touts.

The children danced, half in fear and in excitement at an undefined peril. Shyamji’s wife, never known to be particularly violent, had managed to chase it out with a jhadu; it darted through the kitchen window. Shyamji, not moving from the divan, was a picture of patience, and kept saying, as he did during most crises, ‘Arrey bhai, pareshan mat hona, don’t get agitated.’

O
N THE WAY TO
the city in the mornings, he’d stop at Peddar Road sometimes, at his wife’s brother’s place; going up a steep incline and entering a compound that was not visible from the main road. Here, they lived in a single-storey house not far from a posh girls’ school.

‘Hari om,’ he said as he entered. It was an old joke, this invocation to God, a part of Shyamji’s ‘fun’ mode: it meant he was hot, and that he was here, needing attention. ‘Water, jijaji?’ asked the woman sitting near the doorstep; she had covered part of her face with her sari the moment he had stepped in. Shyamji nodded; then added affectionately: ‘Cold.’ He lowered himself onto the mat and sighed.

Heart Of The Sun by Victoria Zagar
After the Moment by Garret Freymann-Weyr
The Sea is My Brother by Jack Kerouac
Break Away (The Moore Brothers Book 4) by Brooks, Abby
Finding You by Giselle Green
When the Sacred Ginmill Closes by Lawrence Block
A Basket Brigade Christmas by Judith Mccoy Miller
Tehran Decree by James Scorpio
The House of Grey- Volume 6 by Earl, Collin
A Greater World by Clare Flynn