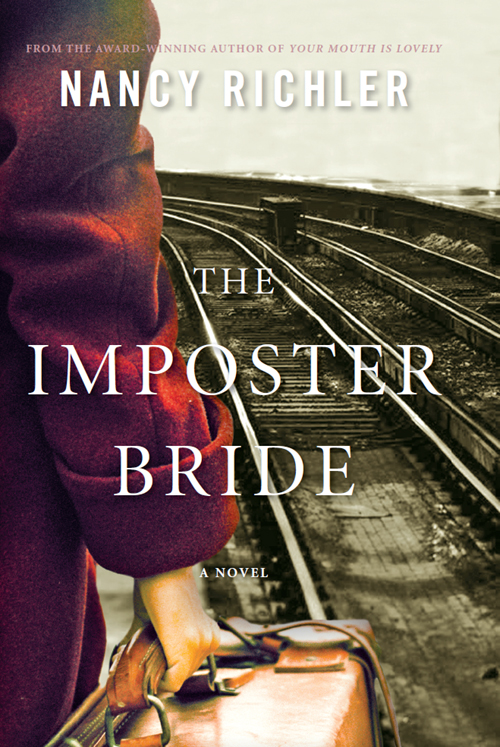 For Janet and Martin
And for Vicki

You whom I could not save

Try to understand this simple speech as I would be ashamed of another
.

I swear, there is in me no wizardry of words
.

I speak to you with silence like a cloud or a tree
.

ADVANCE PRAISE FOR: THE IMPOSTER BRIDE

I
n a small room off a banquet hall in Montreal, Lily Kramer sat in silence with her new husband. It was summer and the room was hot. There were no windows and no door, only a curtain beyond which the guests—almost none of whom she knew—washed down sponge cake and herring with shots of schnapps and vodka. Lily and her husband sat on either end of the couch on which she assumed they were meant to consummate their marriage.

In front of the couch was a table laid with fruit and hard-boiled eggs. Her husband picked up a plum and rolled it in the palm of his hand. His name was Nathan and she had known him for a week. It was his brother, Sol, she had been meant to marry, a man she had corresponded with but hadn’t met, who had caught one glimpse of her as she disembarked at the station and decided he wouldn’t have her. Lily watched Nathan roll the plum in his hand and wondered what his brother had seen in her that made him turn away.

Nathan picked up a knife and began scoring the skin of the plum into sections. They had not yet touched, not even a brush of hand or lip upon becoming husband and wife. She could still count the number of glances they had exchanged, the first when she’d sat on the couch at the house where she was staying, so ashamed by the rejection at the station that she’d had to struggle to meet his gaze while he apologized on behalf of his brother and entire family.

“Your brother cannot even apologize on his own behalf?” she asked. She was surprised by her shame. Disappointed. She had no time to waste—no strength—on a man who fled at the mere sight of a woman. Or so she would have thought.

“Not even that,” Nathan replied.

“No great loss, then,” she said, forcing a lightness she didn’t feel into her voice. She had crossed two oceans to marry this Sol. She had nothing and no one to return to.

“The loss is his,” Nathan said quietly.

She had thought he would leave then, beat a hasty retreat from his brother’s misdemeanour, but he didn’t. He remained standing before her, shifting his weight from foot to foot.

“Would you like to sit down?” she asked finally.

His eyes were warm and brown; there was no pity in them. And he seemed to like what he saw. Already there was heat in his gaze.

He returned the next day to formalize their engagement. Why the rush? Lily wondered when he reappeared at the door. It was not as if she were fielding other offers, would be taken by another if he didn’t quickly stake his claim. But then she knew, thought she knew. It was the rush of colour to her face when he had first entered the room, the lowered gaze that she’d had to force upwards, her chin raised in defiance of what
she felt. He had returned to banish her shame. He brought witnesses and brandy—and the same heat in his gaze. He was a lucky man, Lily thought at that moment. His desire inclined him to acts of goodness.

“Do you speak English?” he asked her that day. They’d been speaking Yiddish until then.

Her English was good, near fluent, in fact. It was her anger at that moment that made her conceal it, sudden anger at his assumption that it was she who was the more ignorant of the two—she who spoke five languages and could get by in several others, who had smuggled lives across borders he wouldn’t be able to find on a map. Rage, in fact, that it should have come down to this: if Nathan Kramer would have her, she would have him and be grateful. She, who had held all of life and death between her two hands before dying and washing up into this pale afterlife of her own existence.

“Eisenbergs,” she said, naming the family that was hosting her, Sol’s employer, whose business was buttons.

He knew she spoke English, had known from the expressions on her face as she’d followed his earlier conversation with the Eisenbergs—all in English. He had met greenhorns before, knew their nodding at wrong moments, their delayed smiles, awkward laughter, baffled eyes. There was none of that in her. She was tired, yes, after the long journey she had made, and certainly confused and distressed by his brother’s behaviour at the station, but she was not a woman who didn’t understand what was being said all around her. She
understood perfectly. And yet pretended she didn’t. That intrigued him.

He had wanted her at once, had decided the moment he’d first stepped into the room. It was not her beauty that drew him. Not merely her beauty. He saw it, of course—how could one not? The fine bones of her face, the smoky blue eyes … But it was the tension in her, a feral tension, part hunger, part fear. It was that which had quickened his blood, that—not her shame—which had made him return the next day with his witnesses and brandy. He had not expected to find such tension in the living room of Sam Eisenberg, the Button King of Montreal. He had met many girls already in the living rooms of Jewish Montreal. Nice girls and not-so-nice, intelligent girls, beautiful girls, wily, witty, hopeful girls, but this … no, not this.

“Please,” he said now, holding out a segment of the plum, the first exchange of their married life.

He watched her—his new bride—as she took a bite of the fruit. Her eyes filled with tears.

“Nothing.” She shook her head, closed her eyes briefly. “It’s a good plum, not too sweet.”

They had both fasted that day, in accordance with tradition. Should they have broken that fast on something else, Nathan wondered now, begun their marriage with a bite of egg, perhaps, symbolic of new life? A slice of melon, wholly sweet, without the tart edge of a plum?

“It’s many years since I tasted a plum like that,” Lily said in her near-perfect English. She handed the remainder of the segment back to him, took a long drink of water, then held the glass against her cheek to cool her skin.

She moved the glass to her other cheek, though it was no longer cool on her skin. Nathan handed her a napkin and she smiled her thanks as she wiped the sweat from her brow and upper lip. He had not seen her smile until then.

LILY AZEROV KRAMER
. She was not who she said she was.

No one really is, I suppose, but Lily’s deception was more literal than most. Her name before … she’d left it there, in that beaten village where the first Lily had died, freeing, among other things, an identity card to replace the one she’d discarded, an identity that could propel a future if someone would just step into it.

Someone would, of course. The village was in Poland, 1944. Nothing went unused.

And here are some of the things that that someone acquired when she stole the identity of a girl she hadn’t known at all in life: the name, first of all, Lily Azerov; the identity card; a pair of woollen socks; a notebook filled with dreams and other scribblings; a single frosted stone.

She pulled the socks over the threadbare ones she was already wearing. The identity card and notebook she stuffed inside the waistband of her trousers, but not before memorizing the only item of practical worth in the notebook’s pages:
Sonya Nemetz, Rehov Hayarkon 7, Tel Aviv
. The stone, which she knew to be a diamond, she slipped inside her body.

It was only then that she hesitated, only as she was ready to leave that something as strong as her will to survive overtook her. She knew she should flee. Every instinct prodded her to leave that village at once and make her way back to the
forest, where she could wait until it was safe to start moving again. And then to move, to join the mass of refugees flooding west in the wake of the liberating army, to fold herself into that mass and begin the life that might, in time, become her own. Move, she told herself, as she had so many times over the past three years, her instincts always keeping her a few inches beyond death’s grasp. But something other than instinct rose in her that day. She hesitated. Her eye lingered. Was it the angle of the dead girl’s body, limbs slightly askew as her younger sister’s had once been in sleep? A fragment of the girl’s dreams that had floated up and entered her as she quickly leafed through the notebook? The shadow of the rat skittering, the smell of its next meal luring it closer?

She stayed. She placed her open hand on the smooth, cold brow, passed it over sightless eyes—greyish blue like her own—and brought down the lids. The eyes would be covered. That was the least and most she felt she could do. She could bring down the lids of the eyes and hold them for a moment. This she did for the girl whose future she was stealing. And then she fled.

SOL KRAMER
was among the guests at the wedding. The wedding that should have been his. Throughout the evening he could be seen toasting the bride and groom and lifting his brother high above his head in dancing more frenzied than joyous. His voice boomed louder than that of any other guest, his face shone with sweat.

“
L’chaim
,” he shouted, downing shot after shot of whisky. He already regretted his decision.

That was the sort of man Sol Kramer was. If he ate brown bread for breakfast, he later wished he’d eaten white. Didn’t merely wish, spent good time wondering how his day would have gone, how much better he would have felt—his gut, his entire being—had he only eaten white bread instead of brown.

The bride looked good to him now. There was a boldness in her expression that he hadn’t noticed before, that hadn’t been there, he could swear, when she first stepped off the train. She’d looked bewildered then, glancing around, waiting anxiously for someone to claim her. Pathetic is how she’d looked, a woman alone with no one to greet her. A piece of unclaimed baggage.

Gabriel's Bride by Amy Lillard
Master of the Moor by Ruth Rendell
Lost Paradise by Cees Nooteboom
The Electrical Experience by Frank Moorhouse
Behind The Mirror ( The Glass Wall Series - Prelude to Book 1 ) by Adler, Madison, Caine, Carmen
A Cry of Angels by Jeff Fields
Too Big to Run by Catherine Hapka
The Fundamental Theory of Us by Alyse Raines
Deadly Dreams by Kylie Brant
One of the Guys by Lisa Aldin