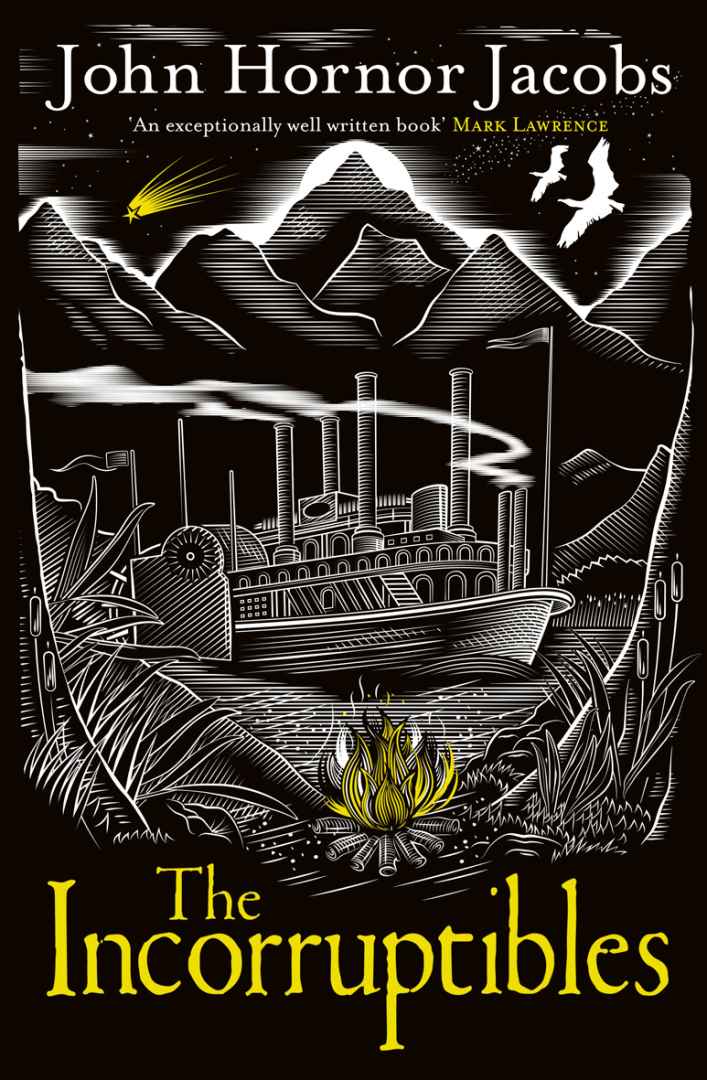 We rode through fields burning like the plains of Hell – Fisk on the black, Banty on the roan bay, and me on Bess, the mule, leading a string of ponies. We came up from the delta and the lush watershed of the Big Rill through the edge of the farmlands. Settlers worked the fields, shovels in hand, throwing dirt on fallow fires. The farmhands looked lean and scrappy; poor folk, eking a living off the land.

‘The praefect orders another hunting expedition, they’ll be floating his body back to New Damnation,’ Banty said, low and through his teeth.

Fisk sniffed, glanced at the smoke billowing above us and then back out over the Big Rill’s sun-hammered silver. No one moves the way Fisk does. Slow and deliberate, each gesture languid and relaxed. Until it isn’t.

The
Cornelian
churned the wide waters of the Big Rill, brag-rags whipping in the wind, steaming upriver, while we kept pace. Fisk and I had picked up the escort contract from Marcellus out of New Damnation, but the proconsul’s tribune had saddled us with Banty, the greenhorn, who was good for nothing, except big talk and no action. The tribune wasn’t a bad fellow, but even good folks make mistakes.

Fisk watched the
Cornelian
, the sky, the land. He remained still but his gaze never stopped roving, his grey eyes bleached by sun and years in the elements. We’d been partners for the last decade and I still didn’t know anything about the man, other than scraps and pieces. Had a family once. Could shoot out the eye of a sparrow on the wing. Feared no man or
vaettir
. There would be no rest for Fisk until the stretchers were gone from the earth. He hated them with a passion wronged men reserve for gods, dangerous women, and whiskey.

Head-count conscripts milled about on the boat’s galleries, staring out into the West, no doubt scanning the horizon for stretchers, terrified. Up on the top deck, in the shadow of the pilot’s roost, stood an umbrella sheltering patrician women. The stacks,
daemon
-fired, blew ash and cinder skyward as if answering the flames of the fields.

Fire calls to fire, they say. I believe that.

From where I sat on Bess, I watched the other scouts – Sharbo, Ellis, and Jimson – riding the western shore, stirrup-high in fallow growth. No farms that side of the river, so close to the mountains. Stretchers come down, raiding.

Banty put a hand on his pistol, a Hellfire six-gun with
imp
rounds. Sure to sully his soul, but deadly.

Fisk glanced at the young man, taking in the rumpled uniform, the tight grip on his pistol.

I laughed at the pup’s posturing and watched as his face went through a series of expressions, from shame to embarrassment. Maybe some anger in there as well. When they’re as young and full of juice as Banty, you never know which way they’ll jump.

At the sound of my laughter, Bess showed gum and green teeth and turned her head to nip at my leg, but I swatted her with my hat. There isn’t anyone, anything, any animal, like Bess. Stout, indomitable, with feet that never slip, not on mountain trail or riverbed. She was the lead mule, the fountainhead, immovable and cantankerous and full of mirth. Behind us followed the string of ponies, bays and roans, dappled and skewbald. None would challenge her lead.

Except maybe Fisk’s black. That bitch was fierce.

Then Banty laughed too, barking a forced, childish sound, and said, ‘I almost had you there, Fisk.’

He was quiet, my partner, holding the black’s reins lightly in his big, rawboned hands. He watched the sky to the east of us, up high in the heavens, as turkey buzzards circled slowly above the plains.

He didn’t even turn when he said to Banty, ‘That’s right.’ He slowed the black and took a Medieran cigarette from his vest pocket. ‘You almost had me, Mr Bantam.’

There wasn’t any warmth in Fisk’s voice. But there was never any warmth in it, except maybe when he cooed to his horse and nuzzled the beast’s canescent neck, or rubbed down her flanks. She was a bitch and a brute, but his and his alone and valuable. Never could understand why he didn’t name her.

Banty kept talking. ‘He’s a devil for the hunt, Cornelius is. When we hit that thicket of quail, Fisk, you shoulda seen the look on his face. Like Ia’d done forgave him all his sins and he’d gone straight to Heaven.’

Fisk’s expression hardened. He wouldn’t shoot the boy, not now, not for foolishness alone. But Fisk’s a killer, natural born. I didn’t know much about the man after a decade, but I knew that much. With every bit of idiocy issuing from Banty’s mouth, he put his life in jeopardy.

Banty slapped his knee and laughed again. ‘Nice gun he’s got, though, ain’t he?’

‘Now that you’re with us, maybe things’ll be different,’ Banty said.

‘Possible,’ said Fisk. ‘Contract is to escort the
Cornelian
and to scout the territories she’ll be passing through. Doesn’t say nothing about hunting.’

Fisk had joined us at the confluence of the Big Rill and the Snake. He’d been south in Harbor Town to restock his ammunition from an engineer there. I don’t have no truck with engineers, for fear of the final disposition of my eternal soul, Ia help me, but Fisk and Banty – and it seems like every other able bodied man in the Hardscrabble Territories – does. Which means I have to be polite, and small, and humble as a saint. Show no aggression or some pistolero will give me extra breathing holes, which ain’t high on my list of priorities. Hellfire pistols – their upkeep and ammunition – are expensive, and men who’re moneyed well enough to afford them are usually prickly in their honor, or the appearance of it.

But I keep various sharp, pointy metal things on my person, and I’m good with a blade, and I can bring down a running rabbit at fifty feet with a sling. But there aren’t enough good deeds in the world that can counter-balance the taint you do your soul once you pick up a Hellfire pistol. Each bullet takes a bit of you with it.

Fisk thumbed a match into fire and lit his cigarette, which smelled of spice and brimstone and brown ladies on a tropical shore. Smoke is a vice that sullies your body, not your soul, so I’m not finnicky about it and enjoy a puff every now and then myself, Ia forgive me.

‘He’s highborn. A senator, with proconsular imperium. That’s big. And acting governor of the Territories, so I’ll remind you to watch yourself. But, it’s true, he’s mad for the hunt,’ I said. ‘With his cohort behind him, if he wants to hunt, he’ll hunt.’

Fisk did this thing with his eyebrow as he looked at me. Hard to tell what the man was thinking, other than he
was
thinking.

He turned the black to the east and rode out a fair distance.

‘There’s his private engineer to think about,’ Fisk said over his shoulder. He took a long draw off the cigarette, held it, and expelled the smoke that whisked away on the breeze. He spat loose tobacco into the dry grasses at his feet. ‘Shoestring?’

‘Believe I’ll outride a bit. Take a gander there.’ He nodded at the pinwheel of turkey buzzards, hanging in the sky like dead cinders on the wind.

He nodded again and pulled his hat tighter on his head. Everything about him was weathered. The grey hat, the faded riding leathers and vest, his gunbelt.

He squinted at me and said, ‘There’s stretchers about.’ And then he looked back to the grey-washed plain. ‘I’ll catch up with you,’ he added, and rode off. We watched him go, up the far rise, over the slope and into the east where the buzzards wheeled under a big sky.

‘What’s stuck in his craw?’ Banty asked. Always talking, that one.

‘Yep. You’re right there.’ I touched my forehead, my lips, my heart. ‘Ia save us from hard men.’

‘You believe that shit?’

Banty grinned then, and placed his hand on his six-gun. ‘Can’t deny you Ia. But if he gives a shit about us, he sure is doing a good job hiding his concern.’

Just a boy, playing at being a man. There’s nothing to do in the company of the faithless. Or the addle-brained. ‘Ia
will
keep us from hard men, stretchers, shoal beasties, and
daemon
-born. Never you worry.’

‘I’ll give you a full gold denarius if you can tell me how.’

‘Ia sends us our
own
hard men.’

Banty looked puzzled; then his expression clouded as he looked after Fisk.

We’d come out of the farmlands, into the dry flat plains before the foothills of the White Mountains, a wide expanse of wind-whipped shallow hillocks wreathed in grass. The
Cornelian
churned the waters, silvering its wake, while lascars in johnboats paddled ahead to plumb depth and search for rocky shoals and sandbars. The Big Rill was wide here, and shallow. The boat’s
daemon-
fired engine pumped a tilted column of ash and smoke into the brittle sky, and gunfire, like the crackle of cooking pig fat, echoed across the open spaces. The Senator was shooting again.

Ignoring that Banty had opened his mouth to speak, I threw him the ponies’ lead rein.

‘Watch for the skewbald mare. She balks at streams.’

I turned Bess to the east and followed Fisk.