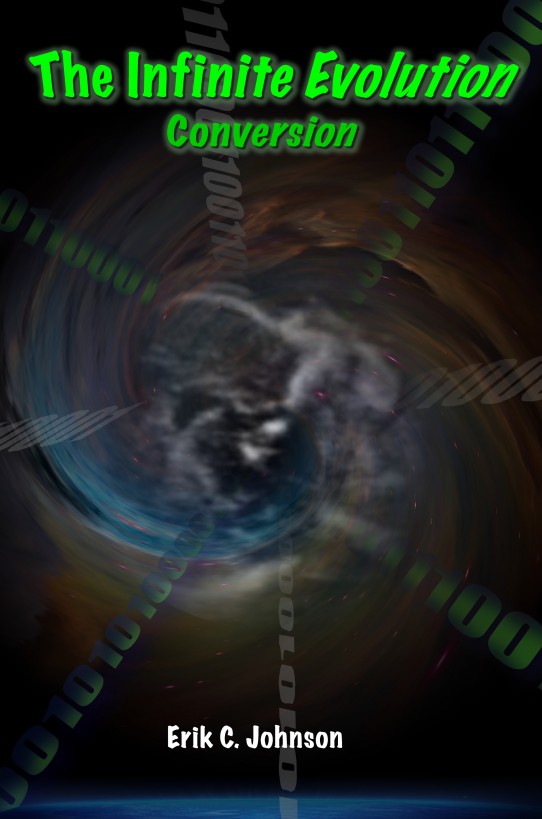 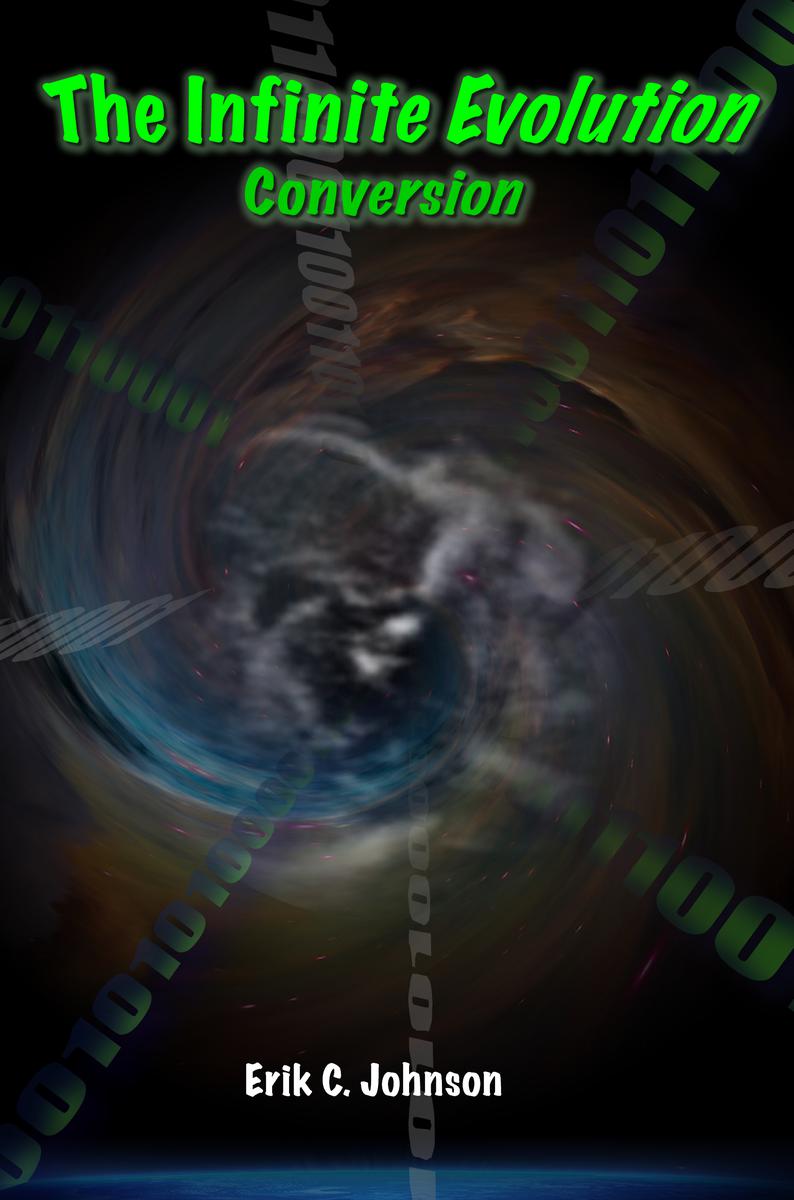 A novel by Erik C.
Johnson

All rights reserved. No part of this book may be
reproduced, stored, or transmitted by any Means—whether auditory,
graphic, mechanical, or electronic—without written permission of
both Publisher and author, except in the case of brief excerpts
used in critical articles and reviews. Unauthorized reproduction of
any part of this work is illegal and is punishable by law.

For Elizabeth thank you for your
oversight and support

For Reece thank you for
you

For Scott you rock

If I didn’t know Erik Johnson, I would never
guess this novel was his first. It is just that good!

If technology is your thing, this story will
entertain you. But
The Infinite Evolution
is more than
science fiction. It is also a novel of mystery, philosophy, and
--especially unusual in a work of this sort-- humor.

For me, though, the characters are the
highlight. From the mysterious Serafina, to the plucky young Jade,
to a main character (Spencer) who meets with a variety of
unexpected “fates,” the characters’ biting humor adds a definite
flair.

Erik’s chapter titles are masterful. “The
End,” soon followed by “The Beginning,” are just two examples of
how Erik inspires the reader’s curiosity.

With
The Infinite Evolution
, Erik
Johnson has launched what I hope will be a successful series of
novels. May he continue writing, long enough to see us all –maybe,
just maybe— driving cars with onboard sensors like the ones in this
story. And if ever you encounter Tureissians in any realm, just
remember: This book is where you heard of them first!

“Spencer Cade, allow me to tell a vision. Remember
your destiny has not yet been influenced, envision before
implementing, and do not be impulsive.”

The dark blue vertical blinds in
Spencer Cade’s bedroom folded upwards as calm music started to fill
his space. The volume slowly increased and expelled natural
melodies of a stream, overlaid with a series of flutes that echoed
the tenor of a deep base, followed up by a soloist on a concert
piano.

“
Good morning, HICAMS. Is there anyone in my
room?” asked Spencer.

“
Was it you who told me to remember something
about my destiny or being impulsive?”

“
That’s strange I could swear
someone leaned over and whispered something in my ear, it must have
been a dream. Whatever it was, I certainly don’t act impulsively,”
bolstered Spencer.

“
I assure you, Mr. Cade, you were the last
person to enter this room.”

“
What does your name stand for
again?”

“
It is an acronym that stands for
Home Interactive and Computer Aid Monitoring System.”

“
That’s a mouthful. I can see why
your makers shortened it to HICAMS,” uttered Spencer as he started
to dose off.

On a cylinder shaped table a
seventeen-inch 3-D hologram of a female news broadcaster appeared
in the middle of the room and spoke about world events.

“
Yesterday an earthquake occurred
in Los Angeles, California at 1:51 am Pacific Standard Time. It
registered a 3.9 on the Richter scale. Casualties were few and
damage to the Metro red line ended up placing parts of it out of
service. Reports have come in that the aftershocks were felt as far
away as eastern Nevada.” The broadcaster transitioned to her next
story with little concern in her voice, “Five whales were found on
a beach in North Truro, Massachusetts. Local residents spotted the
finback whales at 2:33 am Eastern Standard Time. Emergency workers
and volunteers are currently on the scene trying to keep the whales
moist until they can come up with a strategy to move them back into
the ocean. In other news the unknown outbreak of an airborne virus,
which broke out in Australia a week ago today, has
been…”

Before the virtual news
broadcaster could finish her sentence, a disgruntled voice called
out, “Really? You have to be kidding me! Who programmed you to play
this depressing crap so early in the morning?”

“
First of all stop addressing me
as Mr. Cade. It’s Spencer, let’s cut the formalities. I have lived
in this house for close to two months, I think we can address one
another on a first name basis.”

“
Forget it, why bother?” as
Spencer pulled the covers over his head.

“
Second item, what second item?”
mumbled Spencer while under the covers.

“
When you began this conversation you started
out with, ‘first of all,’ listen, I will play it back for you in
your own voice.”

“
Yes, yes,” said Spencer rudely
as he pulled a pillow over his head.

There was a slight pause as he
slowly emerged from his cocoon of blankets, “Umm, what was that
second issue?” as he thought, “Oh yea, I remember, I most certainly
didn’t program you to play this music.”

HICAMS replied swiftly, “I am
sorry, Mr. Cade, but two days ago you asked me to play soothing
music for you on your days off.”

“
Yes, soothing music, not sounds
of a stream running in the background while someone plays the
synthesizer. That’s not music, it’s some type of hippie
intervention!”

“
Correction, that is not a
synthesizer, it is a concert piano.”

“
Sorry! Concert piano,” said
Spencer sarcastically. “Anyway, it’s bad enough I have to take a
leak first thing in the morning. I most certainly don’t need the
feeling amplified by the sounds of running water.”

It was then Spencer’s queen size bed began lifting
up the upper portion of his body. “What now? Are you trying to kick
me out of my own bed?”

“
Yes, Mr. Cade, I will change the
music selection immediately and no, Mr. Cade, I am not removing you
from your bed. You have the bed programmed to place itself upright
at 0607 hours.”

“
Not in your programming, you’ve got to be
kidding me!”

“
Would you like to make a more
specific music request?”

“
No! That is why I paid thousands
of credits for your program, on top of what I paid for this
overpriced condominium. I don’t want to, nor do I feel like making
these simple decisions.”

Spencer paused for a moment and
realized his behavior was uncalled for, “It’s not your fault,
HICAMS. I’m sorry for snapping at you, it’s just…” as he stopped to
think of something polite to say.

“
No apology is necessary,” interrupted
HICAMS.

Relieved he did not have to complete his sentence
Spencer replied, “Thanks,” in a quiet nonchalant voice.

“
My name is Spencer, call me Spencer! You
know, come on, say it S-P-E-N-C-E-R, not Mr. Cade. I really wish
you would stop calling me that, it makes me sound old.”

“
Once again, my apologies, Mr.
Cade. My programming does not give me the ability to interact with
humans in an informal capacity.”

“
I can’t believe this. When will
they make machines more like humans and less like morticians? We
need to get you a personality,” said Spencer while he stretched his
arms above his head.

“
I am sorry, Mr. Cade, I did not understand
that last statement. My program does not permit me to conduct
funeral arrangements nor preserve corpses. Can you please
clarify?”

As Spencer piled his pillows to the side of him, he
said sarcastically, “Oh and back to the original issue, thanks for
turning on that wonderful news.”

“
You are welcome, Mr. Cade,”
replied HICAMS who did not sense his sarcasm.

Spencer ignored HICAMS’
pleasantries and followed up with, “I haven’t even gotten out of my
bed and I’m already depressed. From now on can you look for
programming that doesn’t involve the world coming to an
end?”