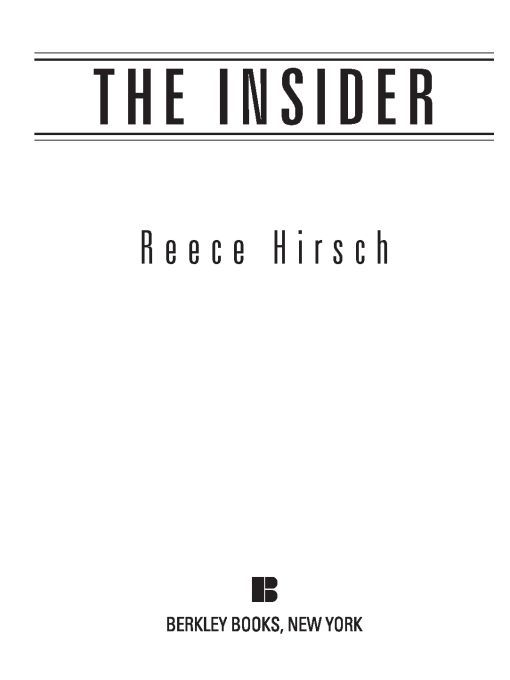 Table of Contents
Title Page
Copyright Page
Dedication
Acknowledgements
Â
ONE
TWO
THREE
FOUR
FIVE
SIX
SEVEN
EIGHT
NINE
TEN
ELEVEN
TWELVE
THIRTEEN
FOURTEEN
FIFTEEN
SIXTEEN
SEVENTEEN
EIGHTEEN
NINETEEN
TWENTY
TWENTY-ONE
TWENTY-TWO
TWENTY-THREE
TWENTY-FOUR
TWENTY-FIVE
TWENTY-SIX
TWENTY-SEVEN
TWENTY-EIGHT
TWENTY-NINE
THIRTY
THIRTY-ONE
THIRTY-TWO
THIRTY-THREE
THIRTY-FOUR
THIRTY-FIVE
“San Francisco, the Russian mob, big business, and very fine legal madnessâgreat stuff . . . from Reece Hirsch, [who] is writing and running with the big boys.”
âJohn Lescroart,
New York Times
bestselling author
Â
“Deftly plotted and filled with intricate twists and turns,
Hirsch has written a terrific story that will keep you up
late. We will be hearing more from this talented newcomer.
Highly recommended.”
âSheldon Siegel,
New York Times
bestselling author
Â
“An extraordinary, fast-paced thriller with compelling characters, understated humor, and a great story. It runs the gamut from national security issues to terrorism to the Russian mob . . . a cross between John Grisham and
Eastern Promises
.”
âMichelle Gagnon, author of
The Gatekeeper
Â
“Fresh and genuinely exciting . . . Hirsch manages to deftly combine a twisty plot involving Russian mobsters, insider trading, and a secret government surveillance program with a sly satire of life in a big law firm.”
âJulia Scheeres, author of
Jesus Land
Â
“A big-time novel . . . fast, smart, and gripping. It hooked me on the first paragraph of page one and held me through to the end.”
âFrank Baldwin, author of
Jake & Mimi
Â
“Only a lawyer could have written a novel with so much deception and betrayal. I was hooked from page one.”
âTim Maleeny, bestselling author of
Jump
Â
“Reece Hirsch's
The Insider
is an absolutely stellar debut thriller, in which one tiny misstep lands us in a high-stakes mirror world of government subterfuge, terrorist plots, wannabe Russian mobsters, cutthroat white-shoe lawyers, and corporate double-dealing. What's not to like?”
âCornelia Read, author of
Invisible Boy
“Gripping and gritty,
The Insider
sizzles with tension and twists that both entertain and magnetize. All the danger, treachery, and action that make a reader clamor for more are there. Well done.”
âSteve Berry,
New York Times
bestselling author
Â
“Compelling in its intensity, and explosive with insider details,
The Insider
by Reece Hirsch introduces gifted young attorney Will Connelly, who is hurled on a pulse-pounding journey into the heart of one of the country's top law firms and San Francisco's powerful Russian mafia. This is a legal thriller sure to keep you up late into the night. Watch out, John Grisham!”
âGayle Lynds,
New York Times
bestselling author
Â
“Attorney Hirsch's debut thriller delivers on every front: a deft plot, blistering action, and plenty of unexpected twists. The finer points of the law are skillfully woven into a tale of insider trading that reaches all the way into the Russian
mafiya
and a terrorist cell. Hirsch brings San Francisco alive as the story unfolds in its famous streets and hidden alleys, its ethnic neighborhoods and corporate fortresses.”
âSophie Littlefield, author of
A Bad Day for Sorry 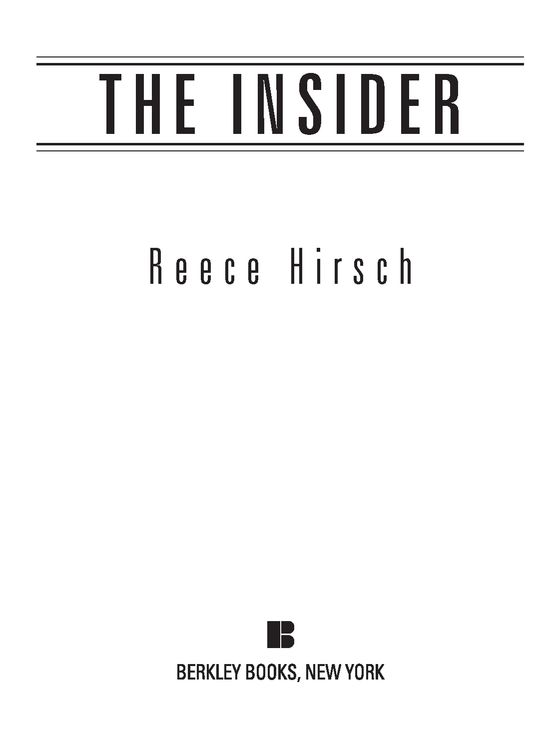 For Kathy
ACKNOWLEDGMENTS
It takes a long time to write a novel, and even longer to write a first novel. Or maybe I'm just a slow learner. In any event, as I stopped, started, swerved and skidded down the long road from idea to publication, I have the following people to thank for helping me keep it between the lines.
First and foremost, my wife, Kathy, the love of my life and first and best reader. You read this manuscript more times than anyone should ever have to read anyone else's manuscript. Without your amazing patience and support, this book would never have been written.
Winifred Golden, my estimable agent, for rescuing me from the slush pile and providing unfailingly sound advice.
My wonderful editor, Natalee Rosenstein, as well as Michelle Vega, Caitlin Mulrooney- Lyski, and the entire team at Berkley Books and Penguin. I will be forever grateful for the way that you got behind this book.
Ed Radlo of Glenn Patent Group, who provided guidance on encryption matters. Any remaining inaccuracies are on me.
The writers groups that I have participated in over the years (the Rockridge gang and the San Francisco Writers Workshop) for telling me when I got it right and, more importantly, when I got it wrong.
Ed Stackler and Frank Baldwin, for helping me understand that there are rules.
My supportive colleagues at Morgan, Lewis & Bockius, a remarkable group of attorneys that (I'm very happy to say) bears no resemblance whatsoever to the fictional Reynolds, Fincher & McComb.
And finally, Donna Levin, who taught the UC Berkeley Extension Novel Writing Workshop where the first pages were written.
ONE
No matter how many times the police asked Will Connelly to recount the events of that morning, his story always beganâand endedâwith the same details. At six thirty A.M., he swiped his access card at the security desk in the lobby of his office building, then rode the elevator to the law firm's offices on the thirty-eighth floor. The hallways were empty, and he saw no signs that anyone had arrived at work yet. In his office, Will threw his suit jacket over the back of a chair, sat down at his desk, and began listening to the voice mails that had come in overnight from far-flung time zones.
Working on his first cup of coffee and first billable hour of the day, Will gazed out his window at San Francisco Bay, which was turning from black to Coke-bottle green as the sun rose through the mottled haze blanketing the Oakland Hills. The wind was already whipping up a light chop on the bay. There was a good chance that conditions would be right for windsurfing by late afternoon. Will had once been an avid windsurfer. He had even subscribed to a pager service that notified him when the conditions were right, but gave that up years ago. The beeping pager had only served to torment him while he was trapped in the office poring over contracts.
But he still kept a surf-shop sticker on the side of his computer monitor, the image of a great white cut through by a red line: NO SHARKS. An ironic motto for a guy striving to make partner in one of the world's largest law firms.
The phone on his desk rang, startlingly loud in the silent office. The Caller ID display flashed
Ben Fisher
, so he knew the call was coming from Ben's office one floor above him. Ben was a senior associate who was providing tax advice on a merger transaction that Will was running.
Will couldn't imagine what Ben might want from him at that hour, so he let the phone ring. He preferred to use these early-morning hours to work on projects that required some concentrated thought and a little quiet. Will needed every bit of concentration that he could muster because he was among the slate of proposed new partners that the executive committee of Reynolds, Fincher & McComb LLP was scheduled to vote on later that day. He had spent the past six years working toward the goal of partnership, and today his fate would be decided. It was more than a little distracting.
With his unlined face and longish brown hair, Will looked more like a law student dressed up for a job interview than someone on the verge of making partner. At thirty-two, he still didn't have the prematurely middle-aged look of many of his peers. In some quarters, looking like a kid was a disadvantage for an attorney, but Will's clients were mostly technology companies that seemed to like their lawyers young. Besides, it added to his reputation as a prodigy. He was two years younger than most of the other associates vying for partnership, a fact that could work against him when the partners' votes were counted.
The phone rang again, and once more the display showed that it was Ben Fisher.
If it's important,
Will thought,
he'll leave me a voice mail
. Anything Ben wanted to talk about could surely wait an hour or two. The phone stopped ringing, but Will continued staring at the console. Finally, the red message light blinked on. Will listened to Ben's message, which was nothing but dead air and the sound of breathing followed by a hang-up. If it didn't even merit a voice mail, then it really must not have been urgent.