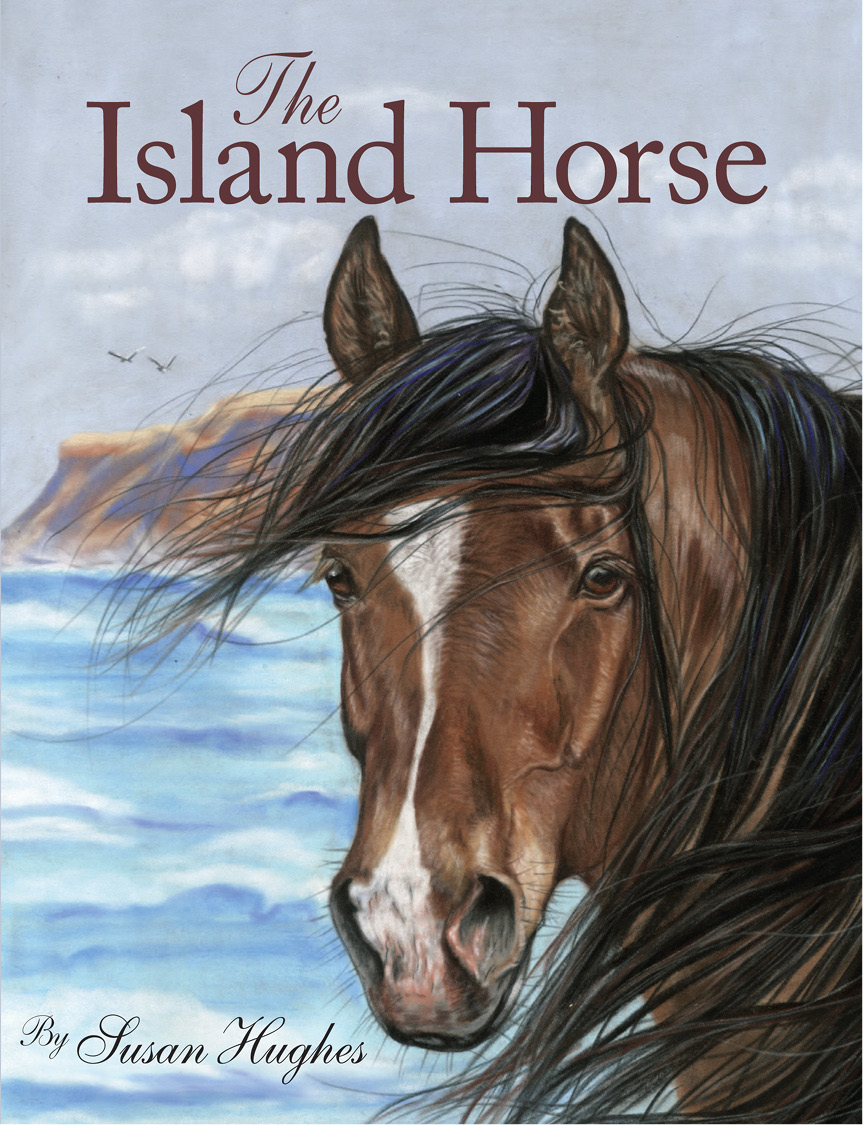 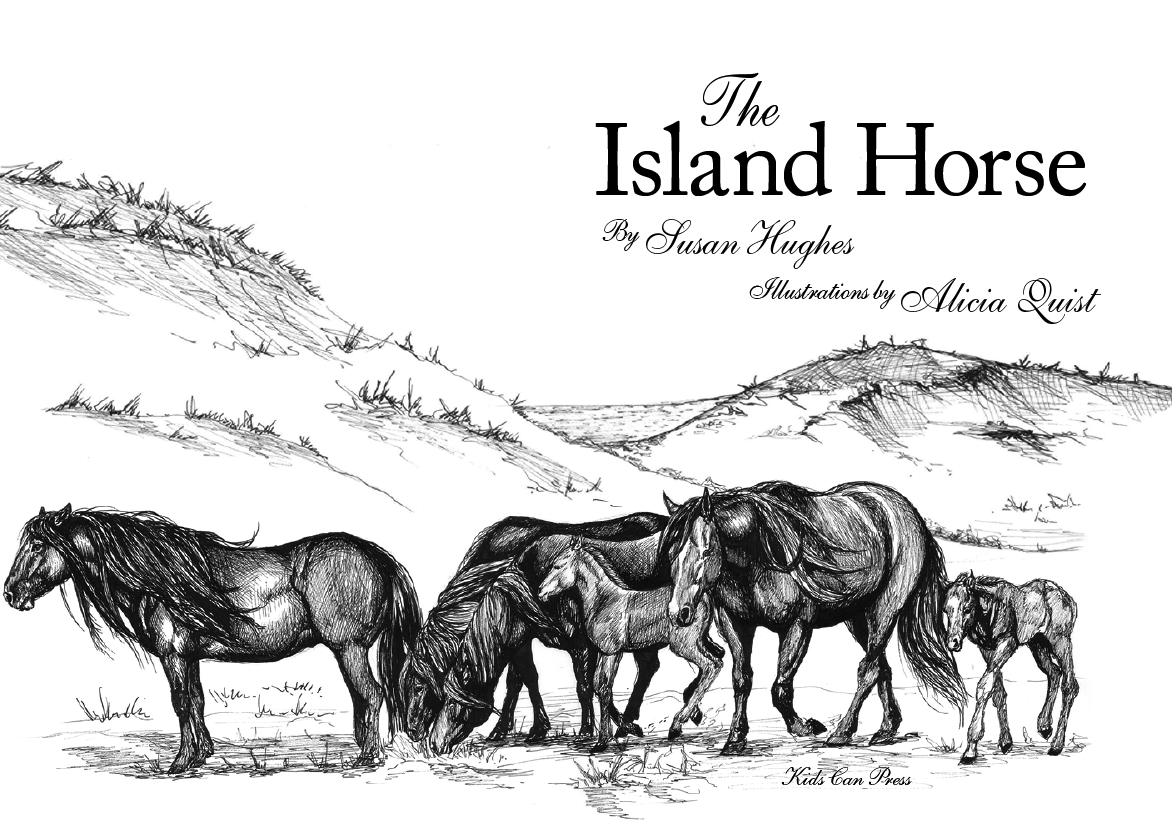 All rights reserved. No part of this publication may be reproduced, stored in a retrieval system or transmitted, in any form or by any means, without the prior written permission of Kids Can Press Ltd. or, in case of photocopying or other reprographic copying, a license from The Canadian Copyright Licensing Agency (Access Copyright). For an Access Copyright license, visit
www.accesscopyright.ca
or call toll free to 1-800-893-5777.

Published in Canada by
Kids Can Press Ltd.
25 Dockside Drive
Toronto, ON M5A 0B5

To Barb Williams, my fellow horse-crazy childhood pal and riding buddy; and to Sheilagh Hale, Jane Helleiner, Beth Hunt and Miff Lysaght, wonderful neighborhood pals who agreed to take part in so many of our horse-obsessed activities, including both pretending to
ride
horses and
be
horses. 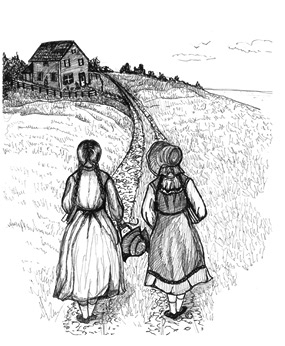 It was a gentle spring afternoon, and, Ellie realized with a smile, it was special.

Ellie was walking home from the village school with her best friend, Lizzie. She held her books, pencil box and slate in one arm. With her other hand, she swung her blue bonnet by its straps.

The road was in front. The sea was beside. And everywhere above was the sky.

They reached Lizzie's little house. The girls were saying their good-byes when Lizzie's mother came hurrying out with a smile and a warm loaf of bread. “For you and your pa,” she told Ellie.

Ellie turned up the path that led to her small cottage. It was halfway up the hill from the village on the coast of Nova Scotia.

Ellie had always lived here, and she always would. It was what Ellie and her mother used to say.

“This is our lovely home.” That would be Ellie's mother. She'd smile and spread her arms wide in the sunshine.

“For always,” Ellie would reply.

When Ellie reached the cottage, she called, “Hello, Pa!” But this afternoon, he wasn't there. So Ellie quickly did her chores. She pumped a bucketful of water. She counted the chickens in the yard and checked for eggs in the coop. Then she cut a slice of the fresh bread and ate it while she did her schoolwork at the kitchen table.

Ellie loved horses, but especially horses that were wild and free. Her family had never had a horse of any kind, and neither had Lizzie's. There were a few ponies in the village, of course. But most were for pulling carts or dragging the boats up from the shore in winter. Only a few were for riding.

Ellie had never seen a wild horse. She probably never would. But she could make up stories about them, and draw them, and these were the things she liked to do most.

Ellie began drawing a horse with a long flowing mane, standing majestically at the top of a hill. She drew on her slate, although it wasn't as nice as drawing on paper. But there wasn't much paper to spare in her home anymore. Not since her mother had gotten sick and died. Not since her father had given up his job on the docks.

“Hello, my sweetpea,” he said as he came in the door. But he didn't move to take off his boots. He took off his hat and held it in his hand. He stood inside the door, squeezing his hat in his fist.

In his other hand, between his fingertips, he held a single envelope. White, tissue-paper thin.

Ellie's mother had been sick for a long time, but last summer her illness had become worse. And so last summer Ellie's father had left his job. He had said, “We will spend these months together.”

And they had. All the long summer, Ellie and her mother and father had stayed close. Ellie had drawn pictures for her mother and told her exciting, made-up stories about adventures with horses. When Ellie's father had cooked simple meals or hung the wash on the line, Ma sat nearby. Ma would ask to go to the top of the hill, and of course they would go. The three of them, Pa carrying Ma. They picnicked there and watched whales. They looked for orchids in the fields and made dandelion chains. They had stayed close, in their small world.

In the fall, Ellie's mother died. They buried her at the top of the hill, not far from home.

Ellie missed her mother every day. She did not want to go to school, but her father told her, “You must.” And so she did, walking back and forth with Lizzie every day. And when she came home, every day, her father was there.

The long fall had passed in this way, and the winter passed just as slowly. Her father had been trying to find a new job, but could not. Times were hard. There was no paid work in the village. Those with boats fished, but her father did not have a boat. And paid work on the docks or the boats was impossible to find.

Now, Ellie's father was holding this letter. For the first time in a long time, there was hope in his voice.

Ellie waited and watched, the slate pencil between her fingers. The horse waited, its eye wild, its leg raised, unfinished.

She saw her father take a deep breath and pull a letter out of the envelope. The paper unfolded as delicately as a flower blossoming. She saw him read the letter, saw a smile split his face.

“Ellie!” he cried. He grabbed her hands and pulled her from her chair. “Ellie, we'll be all right! I
have
been offered a job. A good job!”

Ellie laughed and let herself be spun. She twirled lightly under her father's arching arms. Now maybe she could have paper for her drawings again, and her father would not be so worried. She only wished her mother was here to share the news. 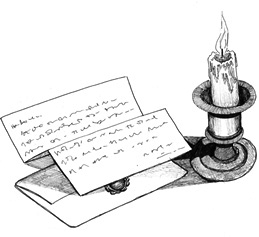 Later that evening, Ellie's father tucked her into bed. She waited for him to pause before he closed the shutters. “Good night, Ma,” she whispered, looking toward the top of the hill. It had become her bedtime ritual.

Her father came to sit on the stool by her bedside. The candle on her nightstand flickered. Ellie was cozied up under an Ellie-sized quilt. It was made of white squares edged in colors, all sewn together. Her mother had sewn it for her, and every night her father tucked it around her, like a hug.

“Ellie,” her father asked, “have you heard of Sable Island?”

She yawned. “Yes, Pa. We learned about it in school.”

Sable Island was a small island far off their coast. It was hundreds of miles away. Forever away. In the sea. Remote and empty.

The horses galloped into her imagination, reared and turned, hooves flying.

Ellie rubbed her eyes, and her father tucked the quilt around her again. She knew he must have mentioned Sable Island because she loved horses so much. And all night, the wild horses were in her dreams.

The next morning, Saturday, Ellie saw her father holding the paper in his hand. The job offer. He was reading it again, and then he looked up at her thoughtfully. He came to sit beside her, pulled his chair in close, put one arm across the back of her chair and rested his other hand on her knee.

“The job, Ellie,” her father said. “It's a good job. But I have to tell you something. The job is on the island, Sable Island.”

“I've got a shore rescue posting,” he explained. Ellie didn't know what this meant, but she didn't ask because her father continued. “I'm sorry, Ellie. I'm really sorry. But we'll have to leave here. We'll have to move to Sable Island so I can work.”

Under the Wire by Cindy Gerard
Act of Fear by Dennis Lynds
Death Marks (The Symbolist) by Walters, Katy
Spider Shepherd 11 - White Lies by Stephen Leather
The Puzzle of Left-Handedness by Rik Smits
Candy Factory Mystery by Gertrude Chandler Warner
Love, Loss, and What I Wore by Beckerman, Ilene
Jealousy by Jessica Burkhart
Water For Elephants by Sara Gruen
Five Golden Rings (Facets of Passion) by Kennedy, Jeffe